Finding the stationary states of a free energy functional is an essential topic in multicomponent material systems. In this paper, we propose a class of efficient numerical algorithms to fast compute the stationary states of multicomponent phase field crystal model. Our approach formulates the problem as solving a constrained non-convex minimization problem. By using the block structure of multicomponent systems, we propose an adaptive block Bregman proximal gradient algorithm that updates each order parameter alternatively. The updating block can be chosen in a deterministic or random manner. The convergence property of the proposed algorithm is established without the requirement of global Lipschitz constant. The numerical results on computing stationary periodic crystals and quasicrystals in the multicomponent coupled-mode Swift-Hohenberg model have shown the significant acceleration over many existing methods. 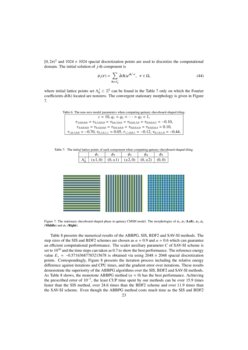 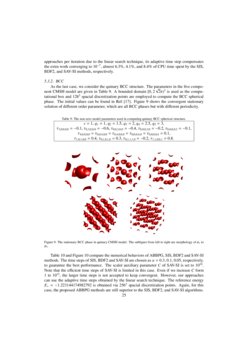 In the applications of signal processing and data analytics, there is a ...
Tianxiang Gao, et al. ∙

In this paper, we investigate the energy minimization model of the ensem...
Xiaoying Dai, et al. ∙

Directed self-assembly (DSA) of block-copolymers (BCPs) is one of the mo...
Dingcheng Luo, et al. ∙

Multicomponent systems, such as alloys, soft matters, are an important class of materials, in particular for technical applications and processes. The microstructure formation of a material plays a central role for a broad range of industrial application, such as the mechanical property of the quality and the durability, optical device, high-capacity data storage devices garcke1999multiphase ; nestler2005multicomponent ; nestler2011phase ; ofori2013multicomponent ; taha2019phase . Advances in modelling and computation have significantly improved the understanding of the fundamental nature of microstructure and phase selection processes. Notable contributions have been made through using the phase field methodology, which has been successful at examining mesoscale microstructure evolution over diffusive time scales. Recently, phase field crystal (PFC) models have been proposed to efficiently simulate eutectic solidification and elastic anisotropy, solute drag, quasicrystal formation, solute clustering and precipitation mechanisms chen2002phase ; nestler2005multicomponent ; steinbach2013phase .

where Θ are relevant physical parameters. F can be polynomial type or log-type formulation brazovskii1975phase ; swift1977hydrodynamic ; cross1993pattern and G is the interaction potential, such as high-order differential terms or convolution terms brazovskii1975phase ; savitz2018multiple . Usually, some constraint conditions shall be imposed on the PFC model, such as the mass conservation or incompressibility which means the order parameter {ϕi(\br)}si=1 belong to a feasible space.

To understand the fundamental nature of multicomponent systems, it often involves finding stationary states corresponding to ordered structures and comparing free energy values of different candidate structures to construct phase diagrams. Denote Vi (i=1,2,⋯,s) to be a feasible space of i-th order parameter, the above problem is transformed into solving the minimization problem

, which brings a tremendous computational burden. Most existing numerical methods for computing the stationary states of PFC models can be classified into two categories. One is to solve the steady nonlinear Euler-Lagrange system of (

2) through different spatial discretization approaches. The another class aims at solving the nonlinear gradient flow equations which is able to describe the quasi-equilibrium phase behavior. In these approaches, great efforts have been made for keeping the energy dissipation which is crucial for convergence. Typical energy stable schemes to gradient flows include convex splitting and stabilized factor methods, and recently developed invariant energy quadrature, and scalar auxiliary variable approaches for a modified energy xu2006stability ; wise2009energy ; shen2010numerical ; yang2016linear ; shen2018scalar . Numerically, a gradient flow equation is discretized in both space and time domains via different discretization techniques and the stationary state is obtained with a proper choice of initialization. To the best of our knowledge, most works focus to develop these methods for binary or ternary multicomponent phase field models badalassi2003computation ; boyer2011numerical ; yang2017numerical . Recently, the scalar auxiliary variable method is introduced for general multiple energy functionals shen2018scalar and successfully applied for two-phase flow yang2019unconditionally ; qiao2019new . Besides, in the time evolution process, a suitable time step has a great impact on the performance of the methods. A large time step may cause the divergence, while a small one usually leads to slow convergence. In the most existing methods, the time step is usually fixed, or obtained by some empirical formulas qiao2011adaptive . In this work, we focus on the multicomponent PFC model and propose a class of efficient, fast and robust numerical methods for solving (2) with desired dissipation and conservation properties. Meanwhile, we propose an adaptive time step approach by using the line search technique.

Under an appropriate spatial discretization scheme, the infinite dimensional problem (2) can be formulated as a minimization problem in a finite dimensional space. Thus, there may exist alternative numerical methods that can converge to the steady states quickly by using modern optimization techniques. For example, similar ideas have shown success in computing steady states of the Bose-Einstein condensate wu2017regularized , one component PFC models jiang2020efficient , and the calculation of density functional theory ulbrich2015proximal ; liu2015analysis . Due to the block structure in the multicomponent PFC model, we propose an accelerated block Bregman proximal gradient method for computing the stationary states of (2). Our method updates each order parameter function, corresponding to the block, with an adaptive time step size by line search method initialized with Barzilai-Borwein step barzilai1988two . The sequence of blocks can be updated either deterministically cyclic or randomly shuffled for each iteration. The convergence analysis only needs that each block is updated at lease once in every fixed number of iterations. Meanwhile, the convergence of the proposed algorithm is provided without the requirement of the global Lipschitz restriction on the gradient of bulk energy.

The rest of this paper is organized as follows. Section 2 presents a concrete multicomponent PFC model, i.e. the coupled-mode Swift-Hohenberg (CMSH) model, and a spacial discretization formulation based on the projection method. In section 3, we present the adaptive block Bregman proximal gradient (ABBPG) method, including non-monotone and monotone versions, for solving the constrained non-convex multi-block problems with proved convergence. In section 4, the proposed approaches are applied to the CMSH model with two choices of Bregman distance. Numerical results are reported in section 5 to illustrate the efficiency and accuracy of our algorithms.

In this work, we consider the coupled-mode Swift-Hohenberg (CMSH) model of multicomponent systems which extends classical Swift-Hohenberg model from one length scale to multiple length scales swift1977hydrodynamic ; jiang2020stability ; jiang2016stability . The CMSH model allows the study of the formation and relative stability of periodic crystals and quasicrystals. Define the integral average \bbint to be

where Ω is a bounded domain and BR is a ball centered at origin with radii R. The free energy of the CMSH model for s component system is

where ϕj is the j-the order paramter, qj>0 is the j-th characteristic length scale, τi1,i2,⋯,is is interaction intensity related to the physical conditions, and \calIs,n is the index set defined as

Moreover, to conserve the number of particles in the system, we are working in a canonical ensemble. That is, the average of each order parameter ϕj satisfies

we focus on solving the minimization:

where \bB∈\bbRm×m is invertible, relevant to the m-dimensional primitive reciprocal lattice. The associated Fourier coefficient can be obtained by

Similarly, the order parameter in multicomponent systems can be expanded as follows

We truncate the Fourier coefficients by setting

Let \bhphij=(\hphi1,j,\hphi2,j,⋯,\hphi\bNj,j)⊤∈\bbCNj with \bNj=∏ml=1(Nl,j+1). Then the discretized energy functional can be stated as

in the real space via the Fast Fourier Transformation algorithm. As a result, it provides an efficient technique to reduce the computation cost.

In the next section, we aim at designing efficient algorithms for solving the non-convex and multi-block problem (11).

In this section, we consider the minimization problem in the form of

where \bxj∈\bbCNj, \calSj is the feasible space of variable \bxj, X={\bxj}sj=1∈\bbCN with N=∑sj=1Nj. It is easy to know that the problem (11) can be reduced to (12) by setting f=F, gj=Gj and \calSj={\bhphij:e⊤1\bhphij=0}. We make the following assumptions on the objective function (12) (the notations can be found in subsection 3.1 for details):

Before proceeding to present the numerical algorithm and analysis for solving (12), we first introduce some notations and useful definitions used in the following analysis. Then, we give an abstract framework of the first order method with proved convergence. Two kinds of concrete numerical algorithms to the CMSH model based on the abstract formulation for solving (11) will be presented in the section 4.

Throughout this paper, we assume that h:\bbCN→(−∞,+∞] is a strongly convex function. Then we have the following definitions. [Bregman divergence li2019provable ] The Bregman divergence with respect to h∈C1(\intdomh) is defined as

It is noted that Dh(x,y)≥0 and Dh(x,y)=0 if and only if x=y due to the strongly convexity of h. Moreover, D(⋅,y) is also strongly convex for any fixed y∈\intdomh.

For the next discussion, we make an additional assumption of problem (12).

Given a feasible Xk,Xk−1∈∏sj=1\calSj, the accelerated block Bregman proximal gradient (ABBPG) method can pick bk∈{1,2,⋯,s} deterministically or randomly, then Xk=(\bxk1,\bxk2,⋯,\bxks) is updated as follows

The extrapolation weight wk∈[0,¯w] for some ¯w>0 and \bxprevi is the value of \bxi before it was updated to \bxki. The definitions of \tbxi and nki can be found in Table 1.

By the convexity of D(⋅,\bxj) and gj, we know that Γj is strongly convex. Thus, Γj is coercive (bauschke2011convex , Corollary 11.17). According to the Corollary 3.23 in brezis2010functional , Γj achieves its minimum on \calSj and the strongly convexity implies the uniqueness of minimum.

Restart technique. The extrapolation in (15) may generates the oscillating phenomenon of the objective value E(X) that slows down the convergence. We use an adaptive restart technique when the sharp oscillation is detected. More precisely, given αk>0 and i=bk, define

In each step, we add a non-monotone backtracking line search method for finding the appropriate step αk which is initialized by the similar idea of BB step barzilai1988two , i.e.

where uki=\byk−\bxki and vki=∇if(\byk,\bxk≠i)−∇if(Xk). Let η∈(0,σ] be a constant and \bzk is obtained form (18), we adopt the step size αk∈[αmin,αmax] whenever the following inequality holds

In summary, the ABBPG method is presented in Algorithm 2.

The Algorithm 2 becomes a monotone decreasing scheme if M=0 as the (19) becomes E(Xk)−E(Xk+1)≥σ∥Xk−Xk+1∥2 for some σ>0. As Algorithm 1 contains a line search scheme, we will show that it can be terminated in finite iterations by using the following descent property. [Sufficient decrease] Under Assumption 12 and Assumption 3.2. Let i=bk, then \bzk generated by (18) satisfies

where γi is the strong convexity coefficient of hi. By the convexity of \calSi and Lemma 3.2, it follows that \byk=(1+wk)\tbxnkii−wk\tbxnki−1i∈\calSi. Then

The first inequality is obtained by the definition of Bregman proximal subproblem, the second inequality holds since the block-wise relative smoothness of f(X) and the last inequality holds from the γi-convexity of hi. Let L:=maxj=1,2,⋯sLj and γ=maxj=1,2,⋯sγj. Lemma 2 shows that the line search condition (21) is satisfied once we set 0<αmin<γ/(2η+γL). Moreover, a direct consequence of Lemma 2 is that if wk=0, then Xk+1≠Xk. In fact, we have \byk=\bxki and max(E(\byk,\bxk≠i),E(Xmk))=E(Xmk), then the line search inequality (21) reduces to a stronger condition than the non-restart condition (19). The above arguments guarantee that Algorithm 2 is well defined.

To ensure the convergence, we make a mild assumption, for the update manner of Algorithm 2. A similar assumption has been used in xu2017globally , With any T consecutive iterations, each block should be updated at least once, i.e. for any k, it has {1,2,…,s}⊆{bk,bk+1,…,bk+T}. Let {Xk} be the sequence generated by Algorithm 2. Then, we have mk+1≥mk and {E(Xmk)} is non-increasing. By the definition of mk, it is easy to know mk+1≥mk. If the non-restart condition (19) does not hold, we know Xk+1=Xk which implies

If the non-restart condition (19) holds, we have

Together with the fact that F∈C1(\bbCN), we conclude that there exists LE>0 suth that E=F+∑sj=1gj is LE-Lipschitz continuous on the compact set \calB(X0).

Suppose Assumption 12 and Assumption 3.2 hold. Let {Xk} obtained by Algorithm 2, there exists E∗>−∞ such that

Assume k≥M, we prove by induction that the following relations hold for any finite j≥1:

where the last inequality holds since mk≥k−M. Let k→∞, we get