An Abstract Stabilization Method with Applications to Nonlinear Incompressible Elasticity

In this paper, we propose and analyze an abstract stabilized mixed finite element framework that can be applied to nonlinear incompressible elasticity problems. In the abstract stabilized framework, we prove that any mixed finite element method that satisfies the discrete inf-sup condition can be modified so that it is stable and optimal convergent as long as the mixed continuous problem is stable. Furthermore, we apply the abstract stabilized framework to nonlinear incompressible elasticity problems and present numerical experiments to verify the theoretical results. 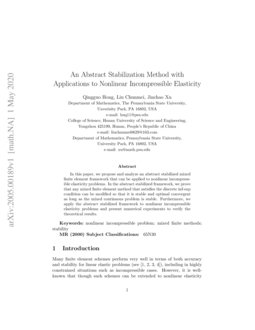 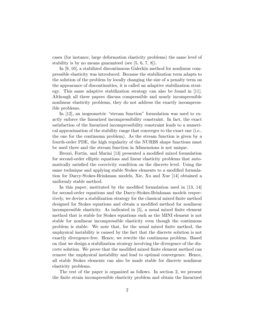 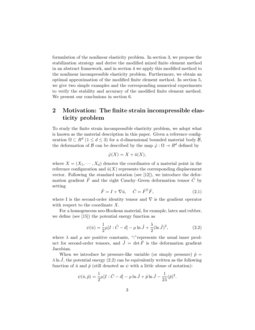 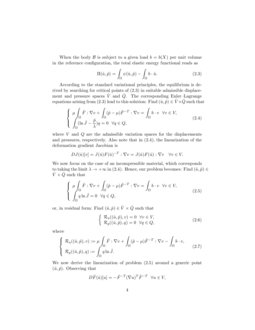 The aim of this work is to show an abstract framework to analyze the num...
Ramiro Acevedo, et al. ∙

This paper deals with the numerical approximation of the biharmonic inve...
Devika Shylaja, et al. ∙

In the first part of the paper, we propose and rigorously analyze a mixe...
Dietmar Gallistl, et al. ∙

Analysis of an abstract mixed formulation for viscoelastic problems

Many finite element schemes perform very well in terms of both accuracy and stability for linear elastic problems (see [1, 2, 3, 4]), including in highly constrained situations such as incompressible cases. However, it is well-known that though such schemes can be extended to nonlinear elasticity cases (for instance, large deformation elasticity problems) the same level of stability is by no means guaranteed (see [5, 6, 7, 8]).

In [12], an isogeometric “stream function” formulation was used to exactly enforce the linearized incompressibility constraint. In fact, the exact satisfaction of the linearized incompressibility constraint leads to a numerical approximation of the stability range that converges to the exact one (i.e., the one for the continuum problem). As the stream function is given by a fourth-order PDE, the high regularity of the NURBS shape functions must be used there and the stream function in 3dimensions is not unique.

In this paper, motivated by the modified formulation used in [13, 14] for second-order equations and the Darcy-Stokes-Brinkman models respectively, we devise a stabilization strategy for the classical mixed finite method designed for Stokes equations and obtain a modified method for nonlinear incompressible elasticity. As indicated in [5], a usual mixed finite element method that is stable for Stokes equations such as the MINI element is not stable for nonlinear incompressible elasticity even though the continuous problem is stable. We note that, for the usual mixed finite method, the unphysical instability is caused by the fact that the discrete solution is not exactly divergence-free. Hence, we rewrite the continuous problem. Based on that we design a stabilization strategy involving the divergence of the discrete solution. We prove that the modified mixed finite element method can remove the unphysical instability and lead to optimal convergence. Hence, all stable Stokes elements can also be made stable for discrete nonlinear elasticity problems.

To study the finite strain incompressible elasticity problem, we adopt what is known as the material description in this paper. Given a reference configuration Ω⊂Rd (1≤d≤3) for a d-dimensional bounded material body B, the deformation of B can be described by the map ^φ:Ω→Rd defined by

where X=(X1,⋯,Xd) denotes the coordinates of a material point in the reference configuration and ^u(X)

[12]), we introduce the deformation gradient ^F

and the right Cauchy–Green deformation tensor

where I is the second-order identity tensor and ∇ is the gradient operator with respect to the coordinate X.

For a homogeneous neo-Hookean material, for example, latex and rubber, we define (see [15]) the potential energy function as

where λ and μ are positive constants, “:”represents the usual inner product for second-order tensors, and ^J=det^F is the deformation gradient Jacobian.

When we introduce he pressure-like variable (or simply pressure) ^p=λln^J, the potential energy (2.2) can be equivalently written as the following function of ^u and ^p (still denoted as ψ with a little abuse of notation):

When the body B is subject to a given load b=b(X) per unit volume in the reference configuration, the total elastic energy functional reads as

According to the standard variational principles, the equilibrium is derived by searching for critical points of (2.3) in suitable admissible displacement and pressure spaces ^V and ^Q. The corresponding Euler–Lagrange equations arising from (2.3) lead to this solution: Find (^u,^p)∈^V×^Q such that

where V and Q are the admissible variation spaces for the displacements and pressures, respectively. Also note that in (2.4), the linearization of the deformation gradient Jacobian is

We now focus on the case of an incompressible material, which corresponds to taking the limit λ→+∞ in (2.4). Hence, our problem becomes: Find (^u,^p)∈^V×^Q such that

We now derive the linearization of problem (2.5) around a generic point (^u,^p). Observing that

we easily get the problem for the infinitesimal increment (u,p): Find (u,p)∈V×Q such that

Since problem (2.9) is the linearization of problem (2.5), it can be interpreted as the generic step of a Newton-like iteration procedure for the solution of the nonlinear problem (2.5).

Taking (^u,^p)=(0,0) in (2.9), we immediately recover the classical linear incompressible elasticity problem for small deformations; i.e., we find (u,p)∈V×Q such that

Let ^F−Tu=w, we then consider the following problem: Find (w,p)∈V×Q such that

Let Vh⊂V and Qh⊂Q be the compatible finite element spaces. The discrete problem of (2.11) reads: Find (wh,ph)∈Vh×Qh such that

In some cases, it is possible that the continuous problem (2.11) is stable (or well-posed) but that the discrete problem (2.13) is not (see [5]). In such cases, we say that there is an unphysical instability caused by the discretization.

As shown at the end of the previous section, it is necessary to establish stable discretization when the continuous problem (2.11) is stable. So in this section, we propose an abstract stability strategy framework for the mixed approximation.

Let V and Q each be a Hilbert space, and assume that

are continuous bilinear forms. Let f∈V′ and g∈Q′. We denote both the dual pairing of V with V′ and that of Q with Q′ by ⟨⋅,⋅⟩. We consider the following problem: Find (w,p)∈V×Q such that

We associate a mapping B with the form b:

As is well-known, the continuous problem (3.1) is well-posed under the following assumptions:

Now we rewrite the problem (3.1) in an equivalent form as follows: Find (w,p)∈V×Q such that

Let Vh⊂V and Qh⊂Q be finite dimensional subspaces of V and Q such that the following assumption is satisfied:

where β1 is independent of h.

We consider the discretization of the problem (3.4) as follows: Find (wh,ph)∈Vh×Qh such that

(see [16]) A1 is equivalent to the following condition, the operator B:V⊥→Q′ is an isomorphism, and

Under the assumptions A1 and A2, there is a constant M0 such that the discrete problem (3.6) is stable for any M≥M0 in the sense that there exists a positive constant α1 such that

Let w,p be the solution of the problem (3.4), then under the assumptions A1,A2,A3 and providing that M is sufficiently large, the discrete problem (3.6) has a unique solution (wh,ph)∈Vh×Qh, which satisfies

where C is a constant depending on α1 and β1.

4 Application to the nonlinear elasticity problem

We now apply the abstract stabilized framework proposed in the previous section to nonlinear incompressible elasticity problems. Suppose that Ω is connected, we consider the d-dimensional Dirichlet boundary value problem (other boundary value problems are similar) of (2.11), which means that V=(H10(Ω))d,Q=L20(Ω). We choose Vh and Qh as finite element spaces such that A3 is satisfied. Furthermore, K={v∈(H10(Ω))d:divv=0}. We rewrite (2.11) as: Find (w,p)∈V×Q such that

The discretization of the problem (4.1) is as follows: Find (wh,ph)∈Vh×Qh such that

the discrete problem (4.2) is stable in the sense that there exists a positive constant α1 such that

Also from the abstract framework in the previous section, we can get an approximate accuracy result similar to (3.9).

Let w,p be the solution of the problem (2.11), then under the assumptions A2 and A3 and providing that M is sufficiently large, the discrete problem (4.2) has a unique solution (wh,ph)∈Vh×Qh, which satisfies

where the constant C depends on α1,β1.

In this section, we report our numerical experiments in regard to the performance of the stabilization strategy for two simple examples. We consider here simple problems using some mixed finite element formulations that are known to be optimal for Stokes equations. We first briefly present the finite element under consideration and then show the numerical results obtained using such element.

In this subsection, we present two simple problems that will be used in subsection 5.3 to discuss the performance of the stabilization strategy proposed in Section 3. Using the usual Cartesian coordinates (X,Y), we consider a square material body whose reference configuration is Ω=(−1,1)×(−1,1). We denote Γ=[−1,1]×{1} as the upper part of its boundary, while the remaining part of ∂Ω is denoted with ΓD. The total energy is assumed to be as in (2.3), where the external loads are given by the vertical uniform body forces: b=γf, where f=(0,1)⊤. The two problems differ in regard to the imposed boundary conditions. More precisely:

For the problems under investigation, the corresponding linearized problems (cf. (2.12)) can both be written as: Find (w,p)∈V×Q such that

where δγ is the increment of the parameter of γ.

For these two different problems, the spaces V and Q are defined as follows:

The stable discrete formulation reads as follows (see (4.2)): Find (wh,ph)∈Vh×Qh such that

For Problem 1, it has been theoretically proved in [5] that the continuous problem (5.1) is stable when γ<3μ.

The considered scheme for (5.2) is the MINI element (see [18]). Let Th be a triangular mesh of Ω with the mesh size h. For the discretization of the displacement field, we take

where P1(T) is the space of linear functions on T, and B(T) is the linear space generated by bT, the standard cubic bubble function on T. For the pressure discretization, we take

, we study the eigenvalues of the matrix induced by the bilinear form

A(⋅,⋅) for the problems under consideration. The first loads for which we find a negative eigenvalue are the critical ones. We start from γ=0 for both positive and negative loading conditions, i.e., for γ<0 and γ>0. We indicate as the critical loads γm,h and γM,h the first load values for which we find a negative eigenvalue. A subsequent bisection-type procedure is used to increase the accuracy of the critical load detections. The corresponding nondimensional quantities are denoted with ~γm,h and ~γM,h, respectively, where ~γ=γLμ. Here, L is some problem characteristic length, set equal to 1 for simplicity, consistents also with the geometry of the model problems. If we do not detect any negative eigenvalue for extremely large values of the load multiplier (~γ>106), we set ~γ=∞. Noting that the bound constant C1 for the formulation a(⋅,⋅) is of order γ+2μ and the stable constant of a(⋅,⋅) is of order μ, we can choose M0=m1|~γ|+m2~γ2 by the proof of Theorem 3.1. Hence, in the codes, we set μ=40,M(γ)=m1|~γ|+m2~γ2, then we adjust the parameter ~γ, m1 and m2 to investigate the stability performance. Furthermore, we take m1=320,m2=0 for Problem 1 and m1=320,m2=1.36 for Problem 2.

always overestimates the parameter used in practical problems. However, we can choose the parameter heuristically by analyzing the stability and continuity of continuous problems in the numerical experiments presented in Section