This paper focuses on the restart strategy of CMA-ES on multi-modal functions. A first alternative strategy proceeds by decreasing the initial step-size of the mutation while doubling the population size at each restart. A second strategy adaptively allocates the computational budget among the restart settings in the BIPOP scheme. Both restart strategies are validated on the BBOB benchmark; their generality is also demonstrated on an independent real-world problem suite related to spacecraft trajectory optimization. 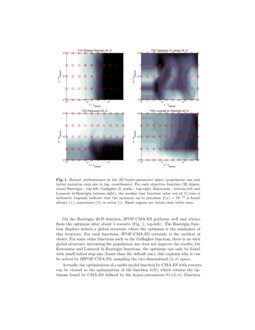 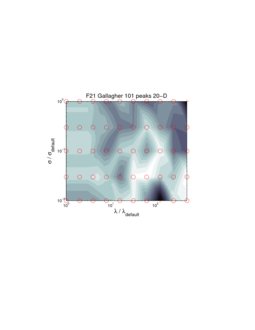 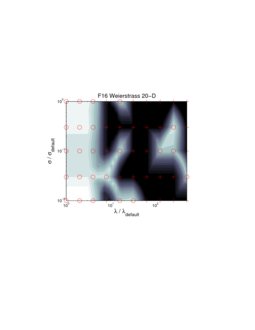 On evolutionary selection of blackjack strategies

We apply the approach of evolutionary programming to the problem of opti...
Mikhail Goykhman, et al. ∙

This paper focuses on mixing strategies to enhance the growth rate in an...
Olivier Bernard, et al. ∙

Mutant reduction evaluation: what is there and what is missing?

The Jaya algorithm is arguably one of the fastest-emerging metaheuristic...
Uday K. Chakraborty, et al. ∙

The long tradition of performance of the Covariance Matrix Adaptation Evolution Strategy (CMA-ES) algorithm on real-world problems (with over 100 published applications [6]) is due among others to its good behavior on multi-modal functions. Two versions of CMA-ES with restarts have been proposed to handle multi-modal functions: IPOP-CMA-ES [2] was ranked first on the continuous optimization benchmark at CEC 2005 [4, 3]; and BIPOP-CMA-ES [5] showed the best results together with IPOP-CMA-ES on the black-box optimization benchmark (BBOB) in 2009 and 2010.

This paper focuses on analyzing and improving the restart strategy of CMA-ES, viewed as a noisy hyper-parameter optimization problem in a 2D space (population size, initial step-size). Two restart strategies are defined. The first one, NIPOP-aCMA-ES (New IPOP-aCMA-ES), differs from IPOP-CMA-ES as it simultaneously increases the population size and decreases the step size. The second one, NBIPOP-aCMA-ES, allocates computational power to different restart settings depending on their current results. While these strategies have been designed with the BBOB benchmarks in mind [8], their generality is shown on a suite of real-world problems [16].

The paper is organized as follows. After describing the weighted active (μ/μw,λ)-CMA-ES and its current restart strategies (section 2), the proposed restart schemes are described in section 3. Section 4 reports on their experimental validation. The paper concludes with a discussion and some perspectives for further research.

The CMA-ES algorithm is a stochastic optimizer, searching the continuous space RD by sampling λ

ones to adaptively estimate the local covariance matrix of the objective function, in order to increase the probability of successful samples in the next iteration. The information about the remaining (worst

λ−μ) solutions is used only implicitly during the selection process.

)-CMA-ES however, it has been shown that the worst solutions can be exploited to reduce the variance of the mutation distribution in unpromising directions

[12], yielding a performance gain of a factor 2 for the active (μ/μI,λ)-CMA-ES with no loss of performance on any of tested functions. A recent extension of the (μ/μw,λ)-CMA-ES, weighted active CMA-ES [11] (referred to as aCMA-ES for brevity) shows comparable improvements on a set of noiseless and noisy functions from the BBOB benchmark suite [7]. In counterpart, aCMA-ES no longer guarantees the covariance matrix to be positive definite, possibly resulting in algorithmic instability. The instability issues can however be numerically controlled during the search; as a matter of fact they are never observed on the BBOB benchmark suite.

At iteration t, (μ/μw,λ)-CMA-ES samples λ individuals according to

These λ individuals are evaluated and ranked, where index i:λ denotes the i-th best individual after the objective function. The mean of the distribution is updated and set to the weighted sum of the best μ individuals ({m}=∑μi=1wi{x}(t)i:λ, with wi>0 for i=1…μ and ∑μi=1wi=1).

where {p}t+1c is adapted along the evolution path and coefficients c1, cμ, c− and α−old are defined such that c1+cμ−c−α−old≤1. The interested reader is referred to [10, 11] for a more detailed description of these algorithms.

As mentioned, CMA-ES has been extended with restart strategies to accommodate multi-modal fitness landscapes, and to specifically handle objective functions with many local optima. As observed by [9], the probability of reaching the optimum (and the overall number of function evaluations needed to do so) is very sensitive to the population size. The default population size λdefault has been tuned for uni-modal functions; it is hardly large enough for multi-modal functions. Accordingly, [2] proposed a “doubling trick” restart strategy to enforce global search: the restart (μ/μw,λ)-CMA-ES with increasing population, called IPOP-CMA-ES, is a multi-restart strategy where the population size of the run is doubled in each restart until meeting a stopping criterion.

stands for the uniform distribution in

The restart strategies of IPOP- and BIPOP-CMA-ES are viewed as a search in the hyper-parameter space.

On the Rastrigin 20-D function, IPOP-CMA-ES performs well and always finds the optimum after about 5 restarts (Fig. 1, top-left). The Rastrigin function displays indeed a global structure where the optimum is the minimizer of this structure. For such functions, IPOP-CMA-ES certainly is the method of choice. For some other functions such as the Gallagher function, there is no such global structure; increasing the population size does not improve the results. On Katsuuras and Lunacek bi-Rastrigin functions, the optimum can only be found with small initial step-size (lesser than the default one); this explains why it can be solved by BIPOP-CMA-ES, sampling the two-dimensional (λ,σ) space.

Actually, the optimization of a multi-modal function by CMA-ES with restarts can be viewed as the optimization of the function h(θ), which returns the optimum found by CMA-ES defined by the hyper-parameters θ=(λ,σ). Function h(θ), graphically depicted in Fig. 1 can be viewed as a black box, computationally expensive and stochastic function (reflecting the stochasticity of CMA-ES). Both IPOP-CMA-ES and BIPOP-CMA-ES are based on implicit assumptions about the h(θ): IPOP-CMA-ES achieves a deterministic uni-dimensional trajectory, and BIPOP-CMA-ES randomly samples the 2-dimensional search space.

Function h(θ) also can be viewed as a multi-objective fitness, since in addition to the solution found by CMA-ES, h(θ) could return the number of function evaluations needed to find that solution. h(θ) could also return the computational effort SP1 (i.e. the average number of function evaluations of all successful runs, divided by proportion of successful runs). However, SP1 can only be known for benchmark problems where the optimum is known; as the empirical optimum is used in lieu of true optimum, SP1 can only be computed a posteriori.

Two new restart strategies for CMA-ES, respectively referred to as NIPOP-aCMA-ES and NBIPOP-aCMA-ES, are presented in this paper.

If the restart strategy is restricted to the case of increasing of population size (IPOP), we propose to use NIPOP-aCMA-ES, where we additionally decrease the initial step-size by some factor ρσdec. The rationale behind this approach is that the CMA-ES with relatively small initial step-size is able to explore small basins of attraction (see Katsuuras and Lunacek bi-Rastrigin functions on Fig. 1), while with initially large step-size and population size it will neglect the local structure of the function, but converge to the minimizer of the global structure. Moreover, initially, relatively small step-size will quickly increase if it makes sense, and this will allow the algorithm to recover the same global search properties than with initially large step-size (see Rastrigin function on Fig. 1).

NIPOP-CMA-ES thus explores the two-dimensional hyper-parameter space in a deterministic way (see □ symbols on Fig. 2). For ρσdec=1.6 used in this study, NIPOP-CMA-ES thus reaches the lower bound (σ=10−2σdefault) used by BIPOP-CMA-ES after 9 restarts, expectedly reaching the same performance as BIPOP-CMA-ES albeit it uses only a large population.

The second restart strategy, NBIPOP-aCMA-ES, addresses the case where the probability to find the global optimum does not much vary in the (λ,σ) space. Under this assumption, it makes sense to have many restarts for a fixed budget (number of function evaluations). Specifically, NBIPOP-aCMA-ES implements the competition of the NIPOP-aCMA-ES strategy (increasing λ and decreasing initial σ0 in each restart) and a uniform sampling of the σ space, where λ is set to λdefault and σ0=σ0default×10−2U[0,1] The selection between the two (NIPOP-aCMA-ES and the uniform sampling) depends on the allowed budget like in NBIPOP-aCMA-ES. The difference is that NBIPOP-aCMA-ES adaptively sets the budget allowed to each restart strategy, where the restart strategy leading to the overall best solution found so far is allowed twice (ρbudget=2) a budget compared to the other strategy.

The BBOB framework [7] is made of 24 noiseless and 30 noisy functions [8]. Only the noiseless case has been considered here. Furthermore, only the 12 multi-modal functions among these 24 noiseless functions are of interest for this study, as CMA-ES can solve the 12 other functions without any restart.

With same experimental methodology as in [7], the results obtained on these benchmark functions are presented in Fig. 4 and Table 1. The results are given for dimension 40, because the differences are larger in higher dimensions. The expected running time (ERT), used in the figures and table, depends on a given target function value, ft=fopt+Δf. It is computed over all relevant trials as the number of function evaluations required in order to reach ft, summed over all 15 trials, and divided by the number of trials that actually reached ft [7].

Due to space limitations, the interested reader is referred to [13] for a detailed presentation of the results.

The NIPOP-aCMA-ES and NBIPOP-aCMA-ES strategies, designed for the BBOB benchmark functions, can possibly overfit this benchmark suite. In order to test the generality of these strategies, a real-world black-box problem is considered, pertaining to a completely different domain: Advanced Concepts Team of European Space Agency is making available several difficult spacecraft trajectory optimization problems as black box functions to invite the operational research community to compare different derivative-free solvers on these test problems [16].

The following results consider the 18-dimensional bound-constrained black- box function ”TandEM-Atlas501”, that defines an interplanetary trajectory to Saturn from the Earth with multiple fly-bys, launched by the rocket Atlas 501. The final goal is to maximize the mass f(x), which can be delivered to Saturn using one of 24 possible fly-by sequences with possible maneuvers around Venus, Mars and Jupiter.

All versions of CMA-ES with restarts have been launched with a maximum budget of 108 function evaluations. All variables are normalized in the range [0,1]. In the case of sampling outside of boundaries, the fitness is penalized and becomes f(x)=f(xfeasible)−α∥∥x−xfeasible∥∥2, where xfeasible is the closest feasible point from point x and α is a penalty factor, which was arbitrarily set to 1000.

improves on the best solution found in 2008, while it is worse than the current best solution, which is blamed on the lack of problem specific heuristics

[1, 15], on the possibly insufficient time budget (108 fitness evaluations), and also on the lack of appropriate constraint handling heuristics.

This paper contribution regards two new restart strategies for CMA-ES. NIPOP-aCMA-ES is a deterministic strategy simultaneously increasing the population size and decreasing the initial step-size of the Gaussian mutation. NBIPOP-aCMA-ES implements a competition between NIPOP-aCMA-ES and a random sampling of the initial mutation step-size, adaptively adjusting the computational budget of each one depending on their current best results. Besides the extensive validation of NIPOP-aCMA-ES and NBIPOP-aCMA-ES on the BBOB benchmark, the generality of these strategies has been tested on a new problem, related to interplanetary spacecraft trajectory planning.

The main limitation of the proposed restart strategies is to quasi implement a deterministic trajectory in the θ space. Further work will consider h(θ) as yet another expensive noisy black-box function, and the use of a CMA-ES in the hyper-parameter space will be studied. The critical issue is naturally to keep the overall number of fitness evaluations beyond reasonable limits. A surrogate-based approach will be investigated [14], learning and exploiting an estimate of the (noisy and stochastic) h(θ) function.