Alternating Between Spectral and Spatial Estimation for Speech Separation and Enhancement 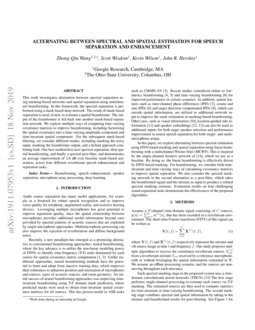 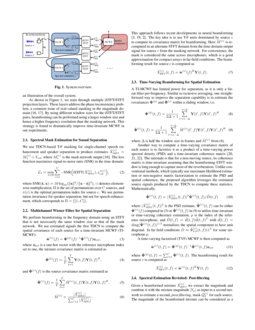 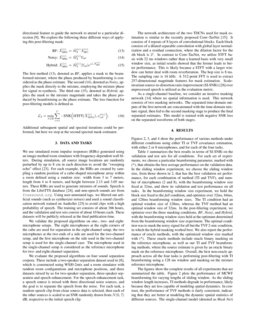 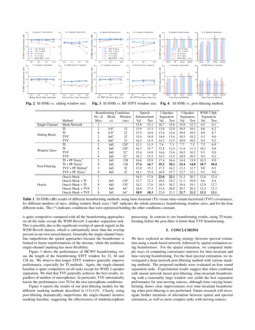 Audio source separation has many useful applications, for example as a frontend for robust speech recognition and to improve voice quality for telephony, augmented reality, and assistive hearing devices. Leveraging multiple microphones has great potential to improve separation quality, since the spatial relationship between microphones provides additional useful information beyond cues provided by spectral patterns of acoustic sources that are exploited by single-microphone approaches. Multimicrophone processing can also improve the rejection of reverberation and diffuse background noise.

Recently, a new paradigm has emerged as a promising alternative to conventional beamforming approaches: neural beamforming, where the key advance is to utilize the non-linear modeling power of DNNs to identify time-frequency (T-F) units dominated by each source for spatial covariance matrix computation [1, 2]. Unlike traditional approaches, neural beamforming methods have the potential to learn and adapt from massive training data, which improves their robustness to unknown position and orientation of microphones and sources, types of acoustic sources, and room geometry. An initial success of neural beamforming approaches was improving time-invariant beamforming using T-F domain mask prediction, where predicted masks were used to obtain time-invariant spatial covariance matrices for all sources. This has proven useful in ASR tasks such as CHiME-3/4 [3]. Recent studies considered online or low-latency beamforming [4, 5] and time-varying beamforming [6] for improved performance in certain scenarios. In addition, spatial features such as inter-channel phase differences (IPD) [7], cosine and sine IPDs [8] and target direction compensated IPDs [9], which can encode spatial information, are utilized as additional network input to improve the mask estimation in masking-based beamforming. Other cues, such as visual information [10], location-guided side information [11] and speaker embeddings [12, 13] can also be used as additional inputs for both target speaker selection and performance improvement in neural speech separation for both single- and multi-microphone setups.

In this paper, we explore alternating between spectral estimation using DNN-based masking and spatial separation using linear beamforming with a multichannel Wiener filter (MCWF). This is inspired by the single-channel iterative network of [14], which we use as a baseline. By doing so, the linear beamforming is effectively driven by DNN-based masking. For beamforming, we consider both time-invariant and time-varying ways of calculating covariance matrices to improve spatial separation. We also consider the spectral masking network in the second alternation as a post-filter, which takes the beamformed signal and the mixture as input to produce a refined spectral masking estimate. Evaluation results on four challenging sound separation tasks demonstrate the effectiveness of the proposed algorithms.

, that has been recorded in a reverberant environment. The short-time Fourier transform (STFT) of this signal can be written as

where Y(t,f) and X(c)(t,f) respectively represent the mixture and cth source image at time t and frequency f. Our study proposes multiple algorithms to recover the constituent reverberant sources X(c)ref from a reverberant mixture Yref received by a reference microphone, with or without leveraging the spatial information contained in Y. We assume an offline processing scenario, and the sources are non-moving throughout each utterance.

[15] The first stage performs single-channel processing to estimate each source via T-F masking. The estimated sources are then used to compute statistics for time-invariant or time-varying beamforming. The second masking stage combines spectral and spatial information by taking in the mixture and beamformed results for post-filtering. See Figure 1 for an illustration of the overall system.

As shown in Figure 1, we train through multiple iSTFT/STFT projection layers. These layers address the phase inconsistency problem, a common issue of real-valued masking in the magnitude domain [16, 17]. By using different window sizes for the iSTFT/STFT pairs, beamforming can be performed using a larger window size and hence a higher frequency resolution than the masking network. This strategy is found to dramatically improve time-invariant MCWF in our experiments.

We use TDCN-based T-F masking for single-channel speech enhancement and speaker separation to produce estimates ^X(c)MN1=M(c)1⊙Yref, where M(c)1 is the mask network output [18]

where SNR(^x,x)=10log10(∥x∥2/∥x−^x∥2), ⊙ denotes element-wise multiplication, Π is the set of permutations over C sources, and π(c) is the optimal permutation index for source c. We use permutation invariance for speaker separation, but not for speech enhancement, which corresponds to Π={[1..C]}.

We perform beamforming in the frequency domain using an STFT that is not necessarily the same window size as that of the mask network. We use estimated signals the first TDCN to compute the spatial covariance of each source for a time-invariant MCWF (TI-MCWF):

is a one-hot vector with the reference microphone index set to one, the mixture covariance matrix is estimated as

and ^Φ(c)(f) is the source covariance matrix estimated as

This approach follows recent developments in neural beamforming [3, 19, 2]. The key idea is to use T-F units dominated by source c to compute its covariance matrix for beamforming. Here ^M(c) is recomputed in an alternate STFT domain from the time-domain output signal for source c from the masking network. For convenience, the mask is considered the same across microphones, which is a good approximation for compact arrays in far-field conditions. The beamforming result for source c is computed as

A TI-MCWF has limited power for separation, as it is only a linear filter per-frequency. Similar to recursive averaging, one straightforward way to improve the separation capability is to estimate the covariances Φ(y) and ^Φ(c) within a sliding window, i.e.

Another way to compute a time-varying covariance matrix of each source is to factorize it as a product of a time-varying power spectral density (PSD) and a time-invariant coherence matrix [20, 21, 22]. The rationale is that for a non-moving source, its coherence matrix is time-invariant assuming that the beamforming STFT window is long enough to capture most of the reverberation. Unlike conventional methods, which typically use maximum likelihood estimation or non-negative matrix factorization to estimate the PSD and spatial coherence, the proposed algorithm leverages the estimated source signals produced by the TDCN to compute these statistics. Mathematically,

A time-varying factorized (TVF) MCWF is then computed as

Given a beamformed mixture ^X(c)BF1, we extract the magnitude and combine it with the mixture magnitude |Yp| as input to a second network to estimate a second, post-filtering, mask ^Q(c)p for each source. The magnitude of the beamformed mixture can be considered as a directional feature to guide the network to attend to a particular direction [9]. We explore the following three different ways of applying this post-filtering mask:

Additional subsequent spatial and spectral iterations could be performed, but here we stop at the second spectral mask estimator.

We use simulated room impulse responses (RIRs) generated using an image-method room simulator with frequency-dependent wall filters. During simulation, all source image locations are randomly perturbed by up to 8 cm in each direction to avoid the “sweeping echo” effect [23]. For each example, the RIRs are created by sampling a random position of a cube-shaped microphone array within a room defined using a random size: width from 3 to 7 meters, length from 4 to 8 meters, and height between 2.13 and 3.05 meters. These RIRs are used to generate mixtures of sounds. Speech is from the LibriTTS database [24], and non-speech sounds are from freesound.org. Using user-annotated tags, we filtered out artificial sounds (such as synthesizer noises) and used a sound classification network trained on AudioSet [25]

to avoid clips with a high probability of speech. The training set consists of about 366 hours, and the validation and test sets consist of about 10 hours each. These datasets will be publicly released at the final publication time.

We evaluate the proposed algorithms on four sound separation corpora. These include a two-speaker separation dataset used in [8], which is constructed using WSJ0-2mix and a room simulator with random room configurations and microphone positions, and three datasets mixed by us for two-speaker separation, three-speaker separation and speech enhancement. For the speech enhancement task, a speech source is mixed with three directional noise sources, and the goal is to separate the speech from the noise. For each task, a random speech clip from clean source data is selected, then each of the other sources is scaled to an SNR randomly drawn from N(0,7) dB, respective to the initial speech clip.

. It consists of 4 repeats of 8 layers of convolutional blocks. Each block consists of a dilated separable convolution with global layer normalization and a residual connection, where the dilation factor for the

ith block is 2i. In contrast to Conv-TasNet, we utilize STFT basis with 32 ms windows rather than a learned basis with very small window size, as initial results showed that the former leads to better performance. This is likely because a STFT with a larger window can better deal with room reverberation. The hop size is 8 ms. The sampling rate is 16 kHz. A 512-point FFT is used to extract 257-dimensional magnitude features for mask estimation. Scale-invariant source-to-distortion ratio improvement (SI-SNRi) [26]

over unprocessed speech is utilized as the evaluation metric.

As a single-channel baseline, we consider an iterative masking network [14] where no spatial information is used. This network consists of two masking networks. The separated time-domain outputs of the first network are concatenated with the time-domain mixture signal, then fed to the second masking stage to produce the final separated estimates. This model is trained with negative SNR loss on the separated waveforms of both stages.

Figures 4, 4, and 4 show the performance of various methods under different conditions using either TI or TVF covariance estimation, with either 2 or 8 microphones, and for each of the four tasks.

The figures show the complete results of all experiments that are summarized the table. Figure 4 plots the performance of MCWF beamforming for varying lengths of sliding window. As the sliding window length increases, TI methods degrade in performance, likely because they are less capable of modeling spatial dynamics. In contrast, the performance of TVF methods is fairly consistent, indicating that they are better at modeling the dynamic spatial statistics of different sources. The single-channel model (denoted as Mask Net

) is quite competitive compared with all the beamforming approaches on all the tasks except the WSJ0 Reverb 2-speaker separation task. This is possibly due to the significant overlap of speech signals in the WSJ0 Reverb dataset, which is substantially more than the overlap present in our own mixed dataset. Generally the single-channel baseline outperforms the spatial approaches because the beamformer is limited to linear transformations of the mixture, while the nonlinear single-channel masking has more flexibility.

Figure 4 shows the performance of MCWF beamforming versus the length of the beamforming STFT window for 32, 64 and 128 ms. We observe that longer STFT windows generally improve performance, especially for TI methods. Again, the single-channel baseline is quite competitive on all tasks except for WSJ0 2-speaker separation. We find that TVF generally achieves the best results, regardless of number of microphones. In particular, TVF substantially boosts the performance over TI for the two-microphone conditions.

Figure 4 reports the results of our post-filtering models for the different masking methods described in (13)-(15). Clearly, using post-filtering dramatically outperforms the single-channel iterative masking baseline, suggesting the effectiveness of multimicrophone processing. In contrast to our beamforming results, using TI beamforming before the post-filter is better than TVF beamforming.

We have explored an alternating strategy between spectral estimation using a mask-based network, followed by spatial estimation using beamformers. For the spatial estimation, we compared multiple ways of computing convariance matrices for time-invariant and time-varying beamforming. For the final spectral estimation, we investigated a deep network post-filtering method with various masking methods. The proposed methods were evaluated on four sound separation tasks. Experimental results suggest that when combined with neural network based post-filtering, time-invariant beamforming with a reasonably large window size yields the best separation performance for non-moving sources, although time-varying beamforming shows clear improvements over time-invariant beamforming when post-filtering is not performed. Future research will investigate further iterations of alternation between spatial and spectral estimation, as well as more complex tasks with moving sources.