It has been demonstrated earlier that universal computation is 'almost surely' chaotic. Machine learning is a form of computational fixed point iteration, iterating over the computable function space. We showcase some properties of this iteration, and establish in general that the iteration is 'almost surely' of chaotic nature. This theory explains the observation in the counter intuitive properties of deep learning methods. This paper demonstrates that these properties are going to be universal to any learning method. 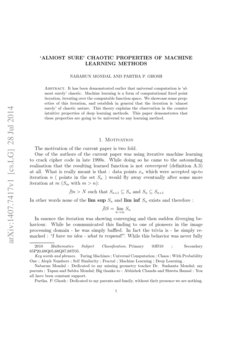 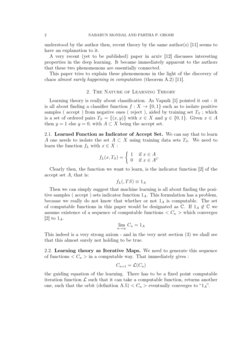 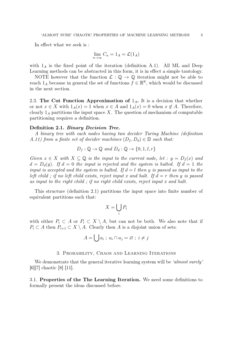 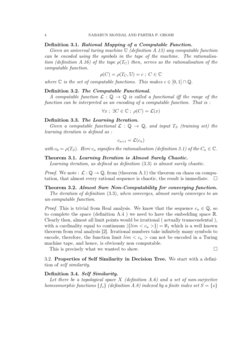 We present a data-driven model to reconstruct nonlinear dynamics from a ...
Kyongmin Yeo, et al. ∙

The motivation of the current paper is two fold.

One of the authors of the current paper was using iterative machine learning to crack cipher code in late 1990s. While doing so he came to the astounding realisation that the resulting learned function is not convergent (definition A.3) at all. What is really meant is that : data points xn which were accepted up-to iteration n ( points in the set Sn ) would fly away eventually after some more iteration at m (Sm with m>n):

In other words none of the lim sup Sn and lim inf Sn exists and therefore :

In essence the iteration was showing converging and then sudden diverging behaviour. While he communicated this finding to one of pioneers in the image processing domain - he was simply baffled. In fact the trivia is - he simply remarked : “I have no idea - what to respond!”. While this behavior was never fully understood by the author then, recent theory by the same author(s) [11] seems to have an explanation to it.

A very recent (yet to be published) paper in arxiv [12] discusses interesting properties in the deep learning. It became immediately apparent to the authors that these two phenomenons are essentially connected.

This paper tries to explain these phenomenons in the light of the discovery of chaos almost surely happening in computation (theorem A.2) [11].

2. The Nature of Learning Theory

Learning theory is really about classification. As Vapnik [1]

pointed it out - it is all about finding a classifier function

f:X→{0,1} such as to isolate positive samples ( accept ) from negative ones ( reject ), aided by training set TS

; which is a set of ordered pairs

We can say that to learn A one needs to isolate the set A⊂X using training data sets TS. We need to learn the function fL with x∈X :

Clearly then, the function we want to learn, is the indicator function [2] of the accept set A, that is:

Then we can simply suggest that machine learning is all about finding the positive samples ( accept ) sets indicator function 1A. This formulation has a problem, because we really do not know that whether or not 1A is computable. The set of computable functions in this paper would be designated as C. If 1A∉C we assume existence of a sequence of computable functions <Cn> which converges [2] to 1A.

This indeed is a very strong axiom - and in the very next section (3) we shall see that this almost surely not holding to be true.

We need to generate this sequence of functions <Cn> in a computable way. That immediately gives :

the guiding equation of the learning. There has to be a fixed point computable iteration function L such that it can take a computable function, returns another one, such that the orbit (definition A.5) <Cn> eventually converges to “1A”.

In effect what we seek is :

with 1A is the fixed point of the iteration (definition A.1). All ML and Deep Learning methods can be abstracted in this form, it is in effect a simple tautology.

NOTE however that the function L:Q→Q iteration might not be able to reach 1A because in general the set of functions f∈RR, which would be discussed in the next section.

2.3. The Cut Function Approximation of 1a

It is a decision that whether or not x∈X with 1A(x)=1 when x∈A and 1A(x)=0 when x∉A. Therefore, clearly 1A partitions the input space X. The question of mechanism of computable partitioning requires a definition.

A binary tree with each nodes having two decider Turing Machine (definition A.11) from a finite set of decider machines (Df,Dd)∈D such that:

This structure (definition 2.1) partitions the input space into finite number of equivalent partitions such that:

with either Pi⊂A or Pi⊂X∖A, but can not be both. We also note that if Pi⊂A then Pi+1⊂X∖A. Clearly then A is a disjoint union of sets:

We demonstrate that the general iterative learning system will be ‘almost surely’ [6][7] chaotic [8] [11].

3.1. Properties of the The Learning Iteration

We need some definitions to formally present the ideas discussed before.

Rational Mapping of a Computable Function.

where C is the set of computable functions. This makes c∈[0,1]∩Q.

Given a computable functional L:Q→Q, and input TS (training set) the learning iteration is defined as :

with c0=ρ(TS). Here cn signifies the rationalisation (definition 3.1) of the Cn∈C.

Learning iteration, as defined as definition (3.3) is almost surely chaotic.

We note : L:Q→Q, from (theorem A.1) the theorem on chaos on computation, that almost every rational sequence is chaotic, the result is immediate. ∎

Almost Sure Non-Computability for converging function.

The iteration of definition (3.3), when converges, almost surely converges to an un-computable function.

This is trivial from Real analysis. We know that the sequence cn∈Q, so to complete the space (definition A.4 ) we need to have the embedding space R. Clearly then, almost all limit points would be irrational ( actually transcendental ), with a cardinality equal to continuum |{lim<cn>}|=ℵ1 which is a well known theorem from real analysis [2]. Irrational numbers take infinitely many symbols to encode, therefore, the function limit lim<cn> can not be encoded in a Turing machine tape, and hence, is obviously non computable.

This is precisely what we wanted to show. ∎

3.2. Properties of Self Similarity in Decision Tree

We start with a definition of self similarity.

Let there be a topological space X (definition A.6) and a set of non-surjective homeomorphic functions {fs} (definition A.8) indexed by a finite index set S={s} with :

If X⊂Y, we call X self-similar if it is the only non-empty subset of Y such that the equation above holds for. Then S=(X,S,{fs}) is called a self similar structure.

A binary decision tree as defined in (2.1) is called infinite if it has countably infinite nodes. Accept set of such a tree exhibits self similar structure ( definition 3.4 ).

We note that every node in the tree first does a transform of the input space X using Df into Y ; both homeomorphic to Q. After that, this space Y is partitioned using Dd which are finite in number as discussed in section (2). Then this individual partitions are homeomorphic to Q. Suppose n(Dd) defines the number of partitions. We can then say there are n(Dd) numbers of homeomorphic (on Q) non-surjective function available for each (Dd,Df). This is due to lemma (A.1).

The set of such functions is finite because ∀n;n(Dd) and D is finite. Suppose then, the set of such composition is termed as F. It is then trivial that when X=Q (at the root) then :

Convergent ML Function would have Self Similar Structure.

If an ML iteration (definition 3.3) converging to a function fA, then accept set of fA:A almost surely would have a self similar structure.

Almost surely the function is un-computable (theorem 3.2). We note that the due to the fixed size of the learner algorithm, the number of deciders the learning system can stays finite. And therefore, to be convergent the structure is to be extended to infinity : that is an infinite binary decision tree (definition 2.1). Now, using theorem (3.3), the result is immediate. ∎

4. Chaos And Machine Learning - A Summary

The theorems proven in the sections before can be useful to deduce very interesting properties of machine learning, which clearly showcases the problems arising from the chaotic nature of the Universal Computation.

Finally we end with the same note they have : indeed, any form of computable machinery would exhibit behaviour of this kind. These chaotic behaviours are in effect Universal, as clearly demonstrated in this paper.

Fixed Point of a function.

such that for x,y,z∈M , the following holds:-

Given a Metric space (M,d) , the sequence x1,x2,x3,... of real numbers is called ‘Cauchy Sequence’, if for every positive real number ϵ , there is a positive integer N such that for all natural numbers m,n>N the following holds:-

Roughly speaking, the terms of the sequence are getting closer and closer together in a way that suggests that the sequence ought to have a limit x∗∈M . Nonetheless, such a limit does not always exist within M .

Note that by the term: sequence we are implicitly assuming infinite sequence , unless otherwise specified.

A metric space (M,d) is called complete (or Cauchy) iff every Cauchy sequence (definition A.3) of points in (M,d) has a limit , that is also in M .

As an example of not-complete metric space take Q , the set of rational numbers. Consider for instance the sequence defined by x1=1 and function d is defined by standard difference between d(x,y)=|x−y| , then :-

This is a Cauchy sequence of rational numbers, but it does not converge towards any rational limit, but to √2 , but then √2∉Q .

The closed interval [0,1] is a Complete Metric space which is homemorphic (definition A.8) to R.

is called an orbit (more precisely ‘forward orbit’) of f.

Let the empty set be written as : ∅. Let 2X denotes the power set, i.e. the set of all subsets of X. A topological space is a set X together with τ⊆2X satisfying the following axioms:-

The set τ is called a topology of X.

Let A be a subset of a topological space X. A is dense in X for any point x∈X, if any neighborhood of x contains at least one point from A.

The real numbers R with the usual topology have the rational numbers Q as a countable dense subset.

A function f:X→Y between two topological spaces (X,TX) and (Y,TY) is called a homeomorphism if it has the following properties:

Existence of Homeomorphic functions on Partitions.

Let P={Pi} be a partition of X homeomorphic to Q, such that:

A sequence <xn> is called a bounded sequence iff :-

Every bounded sequence has a convergent (Cauchy) subsequence.

According to standard notion qa≠qr , but we omit this requirement here, as we are not going to distinguish between two different types of halting (‘accept and halt’ vs ‘reject and halt’) of Turing Machines.

A Turing Machine ‘M’ (definition A.10) computes as follows.

Once ‘M’ starts, the computation proceeds wording to the rules of ‘δ’. However, if the head is already at the leftmost position, then, even if the ‘δ’ rule says move ‘L’ , the head stays there.

The computation continues until the current state of the Turing Machine is either qa , or qr . In lieu of that, the machine will continue running forever.

A Turing Machine, which is guaranteed to halt on any input (i.e. reach one of the states {qa,qr} ) is called a decider.

If for a given problem, it is impossible to construct a decider (definition A.11) Turing Machine, then the problem is called undecidable problem.

Every effective computation can be carried out by a Turing machine (definition A.10), and hence by an Universal Turing Machine(definition A.13).

Any string from an alphabet set Γ can be represented as an integer in base ‘b’ with b=|Γ|. To achieve this, create a one-one and onto Gödel map g:Σ→Db , where,

Any string ‘w’ of length ‘n’ (|w|=n) , created from an alphabet set Γ, can be represented as a rational number x∈Q. We define the rationalization, ρ , in terms of Gödelization (definition A.15) as follows [11]:

Suppose <xn> is an infinite sequence such that xn∈Q, and xi≠xj when i≠j, then <xn> is chaotic. Given a bounded sequence, it is almost surely chaotic [11].

The rationalization of the sequences <Tn> that is <ρ(Tn)> of a Universal Turing machine is a bounded sequence between [0,1]∩Q and hence ‘almost surely’ chaotic (theorem A.1) [11].