Once the maximal frequent sets are known, the family of all frequent sets can be efficiently compressed (without loss of information) by the use of suitable wildcards. 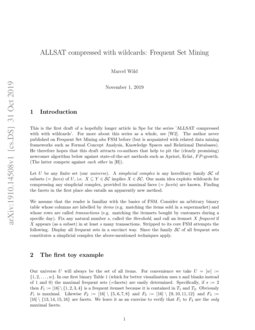 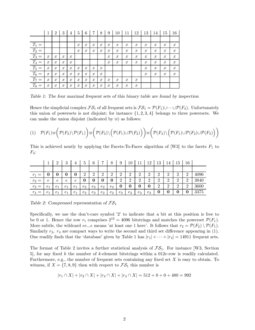 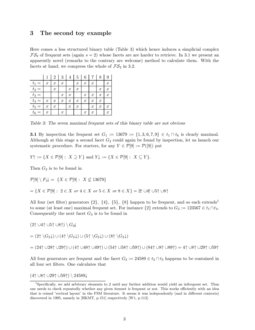 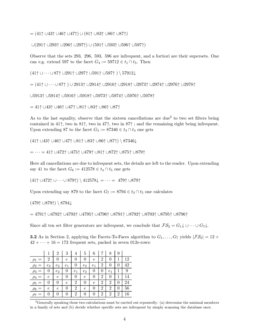 Studying the computational complexity of problems is one of the - if not...
Stefan Neumann, et al. ∙

In this paper we are dealing with the frequent itemset mining. We concen...
Jonas Nüßlein, et al. ∙

Selectivity estimation of a boolean query based on frequent itemsets can...
Nikolaj Tatti, et al. ∙

This is the first draft of a hopefully longer article in Spe for the series ’ALLSAT compressed with with wildcards’. For more about this series as a whole, see [W2]. The author never published on Frequent Set Mining aka FSM before (but is acquainted with related data mining frameworks such as Formal Concept Analysis, Knowledge Spaces and Relational Databases). He therefore hopes that this draft attracts co-authors that help to pit the (clearly promising) newcomer algorithm below against state-of-the-art methods such as Apriori, Eclat, FP-growth. (The latter compete against each other in [H]).

Let U be any finite set (our universe). A simplicial complex is any hereditary family SC of subsets (= faces) of U, i.e. X⊆Y∈SC implies X∈SC. Our main idea exploits wildcards for compressing any simplicial complex, provided its maximal faces (= facets) are known. Finding the facets in the first place also entails an apparently new method.

We assume that the reader is familiar with the basics of FSM. Consider an arbitrary binary table whose columns are labelled by items (e.g. matching the items sold in a supermarket) and whose rows are called transactions (e.g. matching the itemsets bought by customers during a specific day). Fix any natural number s, called the threshold, and call an itemset X frequent if X appears (as a subset) in at least s many transactions. Stripped to its core FSM attempts the following. Display all frequent sets in a succinct way. Since the family SC of all frequent sets constitutes a simplicial complex the above-mentioned techniques apply.

Table 1: The four maximal frequent sets of this binary table are found by inspection

Hence the simplicial complex FS1 of all frequent sets is FS1=P(F1)∪⋯∪P(F4). Unfortunately this union of powersets is not disjoint; for instance {1,2,3,4} belongs to three powersets. We can make the union disjoint (indicated by ⊎) as follows:

This is achieved neatly by applying the Facets-To-Faces algorithm of [W3] to the facets F1 to F4:

The format of Table 2 invites a further statistical analysis of FS1. For instance [W3, Section 5], for any fixed k the number of k-element bitstrings within a 012e-row is readily calculated. Furthermore, e.g., the number of frequent sets containing any fixed set X is easy to obtain. To witness, if X={7,8,9} then with respect to FS1 this number is

Here comes a less structured binary table (Table 3) which hence induces a simplicial complex FS2 of frequent sets (again s=2) whose facets are are harder to retrieve. In 3.1 we present an apparently novel (remarks to the contrary are welcome) method to calculate them. With the facets at hand, we compress the whole of FS2 in 3.2.

Table 3: The seven maximal frequent sets of this binary table are not obvious

Then G2 is to be found in

All four (set filter) generators {2}, {4}, {5}, {8} happen to be frequent, and so each extends111Specifically, we add arbitrary elements to 2 until any further addition would yield an infrequent set. Thus one needs to check repeatedly whether any given itemset is frequent or not. This works efficiently with an idea that is coined ’vertical layout’ in the FSM literature. It seems it was independently (and in different contexts) discovered in 1995, namely in [HKMT, p.151] respectively [W1, p.113]. to some (at least one) maximal frequent set. For instance {2} extends to G2:=123567∈t1∩t4. Consequently the next facet G3 is to be found in

All four generators are frequent and the facet G3:=24589∈t2∩t5 happens to be contained in all four set filters. One calculates that

As to the last equality, observe that the sixteen cancellations are due222Generally speaking these two calculations must be carried out repeatedly: (a) determine the minimal members in a family of sets and (b) decide whether specific sets are infrequent by simply scanning the database once. to two set filters being contained in 41↑, two in 81↑, two in 47↑, two in 87↑ ; and the remaining eight being infrequent. Upon extending 87 to the facet G5:=87346∈t3∩t4 one gets

Here all cancellations are due to infrequent sets, the details are left to the reader. Upon extending say 41 to the facet G6:=412578∈t4∩t5 one gets

Since all ten set filter generators are infrequent, we conclude that FS2=G1↓∪⋯∪G7↓.

The conclusion of this preliminary draft is as follows. While the best way to find the maximal frequent sets remains debatable, our method of compression seems hard to beat, particularly when the facets are large. For instance [W3] it took Facets-To-Faces 1114 seconds to compress approximately 1092 frequent sets (contained in 70 random facets Fi⊆[2000] each of cardinality 300) into 707′518 many 012e-rows.