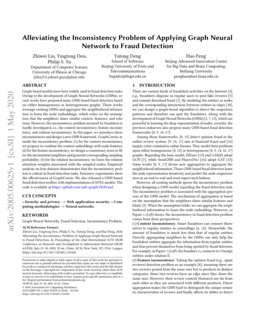 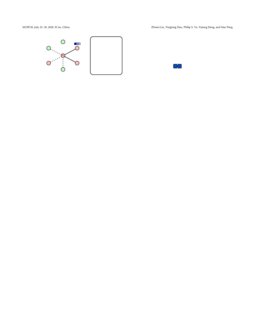 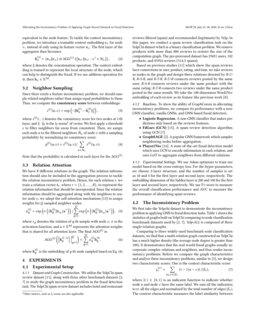 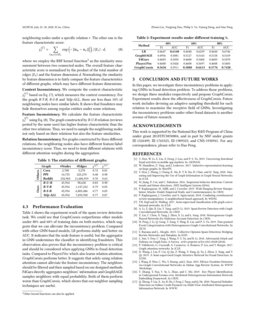 However, all existing methods ignore the inconsistency problem when designing a GNN model regarding the fraud detection task. The inconsistency problem is associated with the aggregation process of the GNN model. The mechanism of aggregation is based on the assumption that the neighbors share similar features and labels (Hou et al., 2020). When the assumption holds, we can aggregate the neighborhood information to learn the node embedding. However, as Figure 1 (Left) shows, the inconsistency in fraud detection problem comes from three perspectives:

(2) Feature inconsistency. Taking the opinion fraud (e.g., spam reviews) detection problem as an example (Li et al., 2019), assuming there are two reviews posted from the same user but to products in distinct categories, those two reviews have an edge since they share the same user. However, their review content (features) are far from each other as they are associated with different products. Direct aggregation makes the GNN hard to distinguish the unique semantic characteristics of reviews and finally affects its ability to detect spam reviews. For example, in Figure 1 (Left), we can find that the feature of node v1 is inconsistent with nodes v4, v6, and v7.

(3) Relation inconsistency. Since the entities are connected with multiple types of relations, simply treating all the relations equally results in a relation inconsistency problem. For example, two reviews may either be connected by the same user or the same product, which are respectively common-user relation and common-product relation. Assuming that one review is suspicious, then the other one should have a greater suspiciousness if they are connected by common-user relation since fraudulent users tend to post many fraudulent reviews. For example, in Figure 1 (Left), we find that under relation II, the fraudster v1 is connected to two other fraudsters. However, under relation I, the fraudster is connected to only one fraudster but three benign entities.

We detect the fraud entities in the graph by using the node representations. Hence, we need to introduce the node representation learning first. A heterogeneous graph G={V,X,{Er}|Rr=1}, where V denotes the nodes, X is the feature matrix of nodes, and Er denotes the edges w.r.t. the relation r. We have R different types of relations. To represent the nodes as vectors, we need to learn a function f:V→Rd that maps nodes to a d dimensional space, where d≪|V|. The function f

C:Rd→{0,1} to detect whether a given node is a fraudster, where 1 denotes fraudster, and 0 denotes benign entity. In this paper, we adopt the GNN framework to learn the node representation through neighbor aggregation. GNN framework can train the mapping function f and the classifier C simultaneously. We only need to input the graph and the labels of nodes to a GNN model. The general framework of a GNN model is:

where h(l)v is the hidden embedding of v at l-th layer, Nv denotes the neighbors of node v, and the AGG represents the aggregation function that maps the neighborhood information into a vector. Here, we use ⊕ to denote the combination of neighbor information and the center node information, it can be direct addition or concatenation then passed to a neural network. For the AGG function, we first assign a sampling probability to the neighboring nodes. Then we sample Q nodes and average111Other pooling techniques can also be applied. them as a vector. The calculation of probability is introduced later in Eq. (4). Note that the framework of GNN is a L-layer structure, where 1≤l≤L. At l-th layer, it aggregates the information from l−1-th layer.

The aggregator combines the information of neighboring nodes according to Eq. (2). When k=1, the hidden embedding h(0)v is equivalent to the node feature. To tackle the context inconsistency problem, we introduce a trainable context embedding cv for node v., instead of only using its feature vector xv. The first layer of the aggregator then becomes:

where ∥ denotes the concatenation operation. The context embedding is trained to represent the local structure of the node, which can help to distinguish the fraud. If we use addition operation for ⊕, then hv∈R2d.

Since there exists a feature inconsistency problem, we should sample related neighbors rather than assign equal probabilities to them. Thus, we compute the consistency score between embeddings:

where s(l)(⋅,⋅) denotes the consistency score for two nodes at l-th layer, and ∥⋅∥2 is the l2-norm222Other metrics, such as l1-norm, are also applicable. of vector. We first apply a threshold ϵ to filter neighbors far away from consistent. Then, we assign each node u to the filtered neighbors ~Nv of node v with a sampling probability by normalizing its consistency score:

Note that the probability is calculated at each layer for the AGG(l).

where rq denotes the relation of q-th sample with node v, σ

is the activation function, and

a∈R4d represents the attention weights that is shared for all attention layer. The final AGG(l) is:

where h(l)q is the embedding of q-th node sampled based on Eq. (4).

We utilize the YelpChi spam review dataset (Rayana and Akoglu, 2015), along with three other benchmark datasets (Kipf and Welling, 2017; Hamilton et al., 2017) to study the graph inconsistency problem in the fraud detection task. The YelpChi spam review dataset includes hotel and restaurant reviews filtered (spam) and recommended (legitimate) by Yelp. In this paper, we conduct a spam review classification task on the YelpChi dataset which is a binary classification problem. We remove products with more than 800 reviews to restrict the size of the computation graph. The pre-processed dataset has 29431 users, 182 products, and 45954 reviews (%14.5 spams).

Based on previous studies (Rayana and Akoglu, 2015) which show the spam reviews have connections in user, product, rating, and time, we take reviews as nodes in the graph and design three relations denoted by R-U-R, R-S-R, and R-T-R. R-U-R connects reviews posted by the same user; R-S-R connects reviews under the same product with the same rating; R-T-R connects two reviews under the same product posted in the same month. We take the 100-dimension Word2Vec embedding of each review as its feature like previous work (Li et al., 2019).

To show the ability of GraphConsis in alleviating inconsistency problems, we compare its performance with a non-GNN classifier, vanilla GNNs, and GNN-based fraud detectors.

Comparing to three widely-used benchmark node classification datasets, we find that a multi-relation graph constructed on YelpChi has a much higher density (the average node degree is greater than 100). It demonstrates that the real-world fraud graphs usually incorporate complex relations and neighbors, and thus render inconsistency problems. Before we compare the graph characteristics and analyze three inconsistency problems, similar to (Hou et al., 2020), we design two characteristic scores. One is the context characteristic score:

where I(⋅)∈{0,1} is an indicator function to indicate whether node u and node v have the same label. We sum all the indication w.r.t. all the edges and normalized by the total number of edges |Er|. The context characteristic measures the label similarity between neighboring nodes under a specific relation r. The other one is the feature characteristic score:

Context Inconsistency. We compute the context characteristic γ(c)r based on Eq. (7), which measures the context consistency. For the graph R-T-R, R-S-R and Yelp-ALL, there are less than 10% of neighboring nodes have similar labels. It shows that fraudsters may hide themselves among regular entities under some relations.

Table 2 shows the experiment result of the spam review detection task. We could see that GraphConsis outperforms other models under 80% and 60% of training data on both metrics, which suggests that we can alleviate the inconsistency problem. Compared with other GNN-based models, LR performs stably and better on AUC. It indicates that the node feature is useful, but the aggregator in GNN undermines the classifier in identifying fraudsters. This observation also proves that the inconsistency problem is critical and should be considered when applying GNNs to fraud detection tasks. Compared to Player2Vec which also learns relation attention, GraphConsis performs better. It suggests that solely using relation attention cannot alleviate the feature inconsistency. The neighbors should be filtered and then sampled based on our designed methods. FdGars directly aggregates neighbors’ information and GraphSAGE samples neighbors with equal probability. Both of them perform worse than GraphConsis, which shows that our neighbor sampling techniques are useful.

In this paper, we investigate three inconsistency problems in applying GNNs in fraud detection problem. To address those problems, we design three modules respectively and propose GraphConsis. Experiment results show the effectiveness of GraphConsis. Future work includes devising an adaptive sampling threshold for each relation to maximize the receptive field of GNNs. Investigating the inconsistency problems under other fraud datasets is another avenue of future research.