Learning segmentation from synthetic data and adapting to real data can significantly relieve human efforts in labelling pixel-level masks. A key challenge of this task is how to alleviate the data distribution discrepancy between the source and target domains, i.e. reducing domain shift. The common approach to this problem is to minimize the discrepancy between feature distributions from different domains through adversarial training. However, directly aligning the feature distribution globally cannot guarantee consistency from a local view (i.e. semantic-level), which prevents certain semantic knowledge learned on the source domain from being applied to the target domain. To tackle this issue, we propose a semi-supervised approach named Alleviating Semantic-level Shift (ASS), which can successfully promote the distribution consistency from both global and local views. Specifically, leveraging a small number of labeled data from the target domain, we directly extract semantic-level feature representations from both the source and the target domains by averaging the features corresponding to same categories advised by pixel-level masks. We then feed the produced features to the discriminator to conduct semantic-level adversarial learning, which collaborates with the adversarial learning from the global view to better alleviate the domain shift. We apply our ASS to two domain adaptation tasks, from GTA5 to Cityscapes and from Synthia to Cityscapes. Extensive experiments demonstrate that: (1) ASS can significantly outperform the current unsupervised state-of-the-arts by employing a small number of annotated samples from the target domain; (2) ASS can beat the oracle model trained on the whole target dataset by over 3 points by augmenting the synthetic source data with annotated samples from the target domain without suffering from the prevalent problem of overfitting to the source domain. 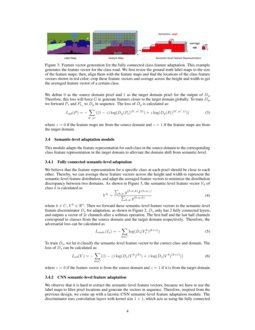 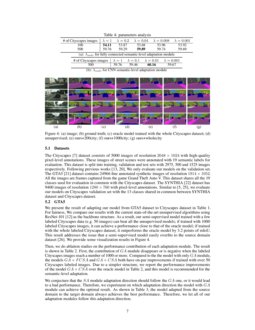 Due to the development and use of deep learning techniques, major progress has been made in semantic segmentation, one of the most crucial computer vision tasks

(a), which leads to poor segmentation performance on the target domain. To address this problem, we propose a semi-supervised learning framework – Alleviating Semantic-level Shift (ASS) model – for better promoting the distribution consistency of features from two domains. In particular, ASS not only adapts global features between two domains but also leverages a few labeled images from the target domain to supervise the segmentation task and the semantic-level feature adaptation task. In this way, the model can ease the inter-class confusion problem during the adaptation process (as shown in Figure

1 (b)) and ultimately alleviate the domain shift from local view (as shown in Figure 1 (c)). As a result, our method 1) is much better than the current state-of-the-art unsupervised methods by using a very small amount of the labeled target domain images; 2) addresses the prevalent problem that semi-supervised models typically overfit to the source domain Wang and Deng (2018), and outperforms the oracle model trained with the whole target domain dataset by utilizing the synthetic source dataset and labeled images from the target domain.

Semantic segmentation: the semantic segmentation is a challenging computer vision task. Ever since the surge of deep learning methods, the state of the art of this task has been raised by a large amount. Deeplab Chen et al. (2014, 2017a, 2017b) is such a series of deep learning models that attained top on the 2017 Pascal VOC Everingham et al. (2015) semantic segmentation challenge. It uses Atrous Spatial Pyramid Pooling (ASPP) module which combines multi-rate atrous convolutions and the global pooling technique to enlarge the field of view on the feature map and therefore deepen the model’s understanding of the global semantic context. Deeplab v2 has laconic structure and good performance in extracting images features and can be easily trained. Therefore, it is selected as the backbone network for our work.

3.1 Overview of the Model Structure

We randomly select a subset of images from the target domain with ground truth annotations, and denote this set of images as {ITL}. We denote the whole set of source images and the set of unlabeled target images as {IS} and {ITU} respectively. As shown in Figure 2, our domain adaptation structure has four modules: the feature generation module G, the segmentation classification module CH, the global feature adaptation module GA and the semantic-level adaptation module SA. We denote the output feature maps of G by F, the ground truth label maps by Y and the downsampled label maps (of the same height and width as F) as y. We use H, W to denote the height and width of the input image, h, w to denote those of F, and h′, w′ to denote those of the confidence maps output by the discriminator of GA. C is the class set, c is the number of classes, and n is the channel number of F.

When testing the model, we forward the input image to G and use CH to operate on F to predict the semantic class that each pixel belongs to. The following sections will introduce the details of each module.

channels. Then, we use a bilinear interpolation to upsample the score maps to the original input image size and apply a softmax operation channel-wisely to get score maps

P. The segmentation loss Lseg is calculated as

where k∈C, Vk∈Rn. Then we forward these semantic-level feature vectors to the semantic-level feature discriminator Ds for adaptation, as shown in Figure 2. Ds only has 2 fully connected layers, and outputs a vector of 2c channels after a softmax operation. The first half and the last half channels correspond to classes from the source domain and the target domain respectively. Therefore, the adversarial loss can be calculated as

, we let it classify the semantic-level feature vector to the correct class and domain. The loss of

Ds can be calculated as:

where z=0 if the feature vector is from the source domain and z=1 if it is from the target domain.

We observe that it is hard to extract the semantic-level feature vectors, because we have to use the label maps to filter pixel locations and generate the vectors in sequence. Therefore, inspired from the previous design, we come up with a laconic CNN semantic-level feature adaptation module. The discriminator uses convolution layers with kernel size 1×1, which acts as using the fully connected discriminator to operate on each pixel of F, as shown in Figure 2. The output has 2c channels after a softmax operation where the first half and the last half correspond to the source domain and the target domain respectively. Then, the adversarial loss can be calculated as:

where k is the pixel ground truth class. To train the discriminator, we can use the loss as follows:

Our ultimate goal for G is to have a good semantic segmentation ability by adapting features from the source domain to the target domain. Therefore, the training objective for G can derive from Eqn (1) as

res4 and res5. For the classification heads, we apply two ASPP modules Chen et al. (2017a) to res4 with λseg1=0.1 and res5 with λseg2=1 respectively. With upsampling the output of res5 and a softmax operation, our backbone model achieves 65.91 mIoU scores with a fully-supervised scheme which is similar to the performance reported in Tsai et al. (2018).

layer of 0.2 negative slope between adjacent convolutional layers. Due to the small batch size in the training process, we do not use batch normalization layers

Fully Connected semantic-level Discriminator. We use two fully connected layers with channel number of 1024 and twice the class number respectively, and we put a Leaky ReLU L. Maas et al. (2013) of 0.2 negative slope between them.

We train the network with two stages. First, we train the segmentation network with GA until convergence. Then, we use the GA+SA to refine the training process. At the first stage, for one iteration, we forward Is and Itl to G and optimize Lseg; then, we pass generated Ps to GA to optimize Lgadv; After that, we forward Itu to G to generate Ptu; we finally use Ptu along with Ps to optimize Lgd. At the second stage, besides all the training strategy in the first stage, when forwarding Is and Itl to G, we also optimize G for Lsadv; at the final step, we also use Fs and Ftl to optimize SA for Lsd.

We use Pytorch toolbox and a single NVIDIA V100 GPU with 16 GB memory to train our network. Stochastic Gradient Descent (SGD) is used to optimize the segmentation network. We use Nesterov’s method

We validate the effectiveness of our proposed method by transferring our model trained with synthetic datasets (i.e., GTA5 Richter et al. (2016) and SYNTHIA Ros et al. (2016)) in a semi-supervised setting to test on the real-world image dataset Cityscapes Cordts et al. (2016).

Then, we do ablation studies on the performance contribution of each adaptation module. The result is shown in Table 2. First, the contribution of GA module disappears or is negative when the labeled Cityscapes images reach a number of 1000 or more. Compared to the the model with only GA module, the models GA+FCSA and GA+CSA both have on-par improvements if trained with over 50 Cityscapes labeled images. Due to a simpler structure, we report the performance improvements of the model GA+CSA over the oracle model in Table 2, and this model is recommended for the semantic-level adaptation.

This paper proposes a semi-supervised learning framework to adapt the global feature and the semantic-level feature from the source domain to the target domain for the semantic segmentation task. As a result, with a few labeled target images, our model outperforms current state-of-the-art unsupervised models by a great margin. Our model can also beat the oracle model trained on the whole dataset from target domain by utilizing the synthetic data with the whole target domain labeled images without suffering from the prevalent problem of overfitting to the source domain.