All you need is a second look: Towards Tighter Arbitrary shape text detection 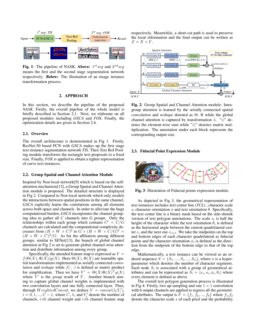 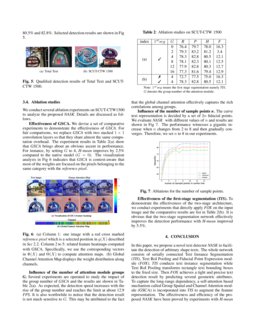 All You Need is a Second Look: Towards Arbitrary-Shaped Text Detection

Look More Than Once: An Accurate Detector for Text of Arbitrary Shapes

TextSnake: A Flexible Representation for Detecting Text of Arbitrary Shapes

Recently, scene text detection (STD) in the wild has drawn extensive attention because of its practical applications[1], such as blind navigation, autonomous driving, etc. Generally, the performance of STD has been greatly enhanced by the advanced object detection[2][3] and segmentation[4] frameworks which can be divided into two categories: 1) Segmentation-based methods[5][6]. These methods draw inspiration from instance segmentation and conduct dense predictions in pixel levels. 2) Regression-based methods[7][8]. Scene texts are detected using the adapted one-stage or two-stage frameworks which have been proved effective in general object detection tasks.

However, STD remains a challenging task due to its unique characteristics. Firstly, since the convolutional operation which is widely used in all segmentation or detection networks only processes a local neighbour, it hardly captures the long-range dependencies even it is stacked repeatedly. Thus, CNN-based STD methods sometimes fail to detect long text instances because they are far beyond CNN’s receptive field[9]. Secondly, although detecting words or text lines with a relatively simple rectangle or quadrilateral representation has been well tackled, curve text detection with a more tight representation is not well solved[10]. Finally, some text instances are extremely tiny which makes their precise shape description more difficult because even a little segmentation deviation may lead to the ultimate failure. Therefore, a single segmentation network fails to process images that vary greatly in text scales.

In order to solve the problems mentioned above, we propose NASK which contains a Text Instance Segmentation network (TIS) and a Fiducial pOint eXpression module (FOX), connected by Text RoI pooling. TIS is a context attended FCN[4] with a proposed Group Spatial and Channel Attention (GSCA) for text instance segmentation. GSCA captures long-range dependencies by directly computing interactions between any two positions across both space and channels, which enhances the semantic information of shared feature maps. Then, similar to Faster R-CNN[11], Text RoI pooling accepts the shared feature maps and the bounding box coordinates generated by TIS as input and ”warps” these rectangular RoIs into a fixed size. Finally, FOX reconstructs texts with a set of fiducial points which are calculated using the predicted geometry attributes.

The main contributions of this work are summarized as follows: (a) A group spatial and channel attention module (GSCA) which aggregates the contextual information is introduced into FCN for feature refinements. (2) We propose a Fiducial pOint eXpression module (FOX) for the tighter arbitrary shape text detection. (3) A novel two-stage segmentation based STD detector named NASK incorporating GSCA and FOX is trained jointly and achieves state-of-the-art performance on two curve text detection benchmarks.

The overall architecture is demonstrated in Fig 1. Firstly, ResNet-50 based FCN with GSCA makes up the first stage text instance segmentation network TIS. Then Text RoI Pooling module transforms the rectangle text proposals to a fixed size. Finally, FOX is applied to obtain a tighter representation of curve text instances.

Inspired by Non-local network[9] which is based on the self-attention mechanism[12], a Group Spatial and Channel Attention module is proposed. The detailed structure is displayed in Fig 2. Compared to Non-local network which only models the interactions between spatial positions in the same channel, GSCA explicitly learns the correlations among all elements across both space and channels. In order to alleviate the huge computational burden, GSCA incorporates the channel grouping idea to gather all C channels into G groups. Only the relationships within each group which contains C′=C/G channels are calculated and the computational complexity decreases from (H×W×C)2 to G×(H×W×C/G)2=(H×W×C)2/G. As for the affiliation among different groups, similar to SENet[13], the branch of global channel attention in Fig 2 is set to generate global channel-wise attention and distribute information among every group.

Specifically, the attended feature map is expressed as Y=f(Θ(X),Φ(X))g(X). Here Θ(X),Φ(X) are learnable spatial transformations implemented as serially connected convolution and reshape while f(⋅,⋅) is defined as matrix product for simplification. Then we have Y′=Θ(X)Φ(X)Tg(X) where Y′ is the group result of Y. Another branch aiming to capture global channel weights is implemented with two convolution layers and one fully connected layer. Thus, through WeightedConcat, we deduce Y=concat(λiY′i), i=0,1,...,C−1, where C, λi and Y′i denote the number of channels, i-th channel weight and i-th channel feature map respectively. Meanwhile, a short-cut path is used to preserve the local information and the final output can be written as Z=X+Y.

As depicted in Fig 3, the geometrical representation of text instances includes text center line (TCL) , character scale s, character orientation ϕ and text orientation θ. Specifically, the text center line is a binary mask based on the side-shrunk version of text polygon annotations. The scale si is half the height of the character while the text orientation θi is defined as the horizontal angle between the current quadrilateral center ci and the next one ci+1. We take the midpoints on the top and bottom edges of each character quadrilateral as fiducial points and the character orientation ϕi is defined as the direction from the midpoint of the bottom edge to that of the top edge.

Mathematically, a text instance can be viewed as an ordered sequence S={S1,...,Si,...,Sn}, where n is a hyper-parameter which denotes the number of character segments. Each node Si is associated with a group of geometrical attributes and can be represented as Si=(ci,si,ϕi,θi) where every element is defined as above.

The overall text polygon generation process is illustrated in Fig 4. Firstly, two up-sampling and one 1×1 convolution with 6 output channels are applied to regress all the geometrical attributes. The output is F={f1,f2,...,f6} where f1,f2 denote the character scale s

of each pixel and the probability of pixels on

TCL respectively. sinθ and cosθ are normalized as cosθ=f3√f23+f24, sinθ=f4√f23+f24 to ensure their quadratic sum equals to 1. sinϕ and cosϕ are normalized in the same way. Then n points are equidistantly sampled in the center line C, named ¯¯¯¯C=(¯¯c1,...,¯¯ci,...,¯¯cn). For each ¯¯ci, according to the geometric relationship, two corresponding fiducial points are computed as follows.

where ¯¯ci, si, ϕi are the center coordinate, scale and orientation for the i-th character respectively. Therefore, one single text instance can be represented with 2n fiducial points. Finally, text polygons are generated by simply applying approxPolyDP in OpenCV[14] and then mapped back to the original image proportionally.

The whole network is trained in an end-to-end manner using the following loss function:

where LTIS and LFOX are the loss for Text Instance Segmentation and Fiducial Point Expression module respectively. LTIS is cross-entropy loss for text regions with OHEM[15] adopted. For LFOX, it can be expressed as follows:

where Ltcl is cross-entropy loss for TCL. Ls,Lsinθ,Lcosθ,Lsinϕ and Lcosϕ are all calculated using Smoothed-L1 loss. All pixels outside TCL are set to 0 since the geometrical attributes make no sense to non-TCL points. The hyper-parameters λ0,λ1,λ2,λ3,λ4,λ5,λ6 are all set to 1 in our experiments.

To evaluate the effectiveness of the proposed NASK, we adopt two widely used datasets with arbitrary shape text instances for experiments and present detailed ablation studies.

Total-Text[16] is a newly-released dataset for curve text detection which contains horizontal and multi-oriented texts as well. It is split into training and testing sets with 1255 and 300 images respectively.

SCUT-CTW1500[17] is a challenging dataset for long curve text detection. It consists of 1000 training images and 500 testing images. The text instances from this dataset are annotated as polygons with 14 vertices.

The proposed method is implemented in PyTorch. For all datasets, images are randomly cropped and resized into

for 10 epochs. We take this step as a warm-up training strategy because the precise first-stage segmentation is a prerequisite for the subsequent text shape refinement. Then in the fine-tuning step, the whole model is trained using Adam optimizer with the learning rate re-initiated to

We evaluate the performance of NASK on Total-Text and SCUT-CTW1500 after finetuning about 10 epochs. The number of sample points n in TCL is set to 8 and the group number G of GSCA is set to 4. Thresholds Ttr, Ttcl for regarding pixels to be text regions or TCL are set to (0.7,0.6) and (0.8,0.4) respectively for Total-Text and SCUT-CTW1500. All quantitative results are shown in Table 1.

From Table1, we can see that NASK achieves the highest H-mean value of 82.2% with FPS reaching 8.4 on Total-Text. The quantitative results on SCUT-CTW1500 dataset also show NASK achieves a competitive result comparable to state-of-the-art methods with H-mean and Precision attaining 80.5% and 82.8%. Selected detection results are shown in Fig 5.

We conduct several ablation experiments on SCUT-CTW1500 to analyze the proposed NASK. Details are discussed as follows.

Effectiveness of GSCA. We devise a set of comparative experiments to demonstrate the effectiveness of GSCA. For fair comparisons, we replace GSCA with two stacked 1×1 convolution layers so that they share almost the same computation overhead. The experiment results in Table 2(a) show that GSCA brings about an obvious ascent in performance. For instance, by setting G to 4, H-mean improves by 2.5% compared to the native model (G=0). The visualization analysis in Fig 6 indicates that GSCA is context-aware that most of the weights are focused on the pixels belonging to the same category with the reference pixel.

Influence of the number of attention module groups G. Several experiments are operated to study the impact of the group number of GSCA and the results are shown in Table 2(a). As expected, the detection speed increases with the rise of the group number and reaches the limit at about 12.9 FPS. It is also worthwhile to notice that the detection result is not much sensitive to G. This may be attributed to the fact that the global channel attention effectively captures the rich correlations among groups.

Influence of the number of sample points n. The curve text representation is decided by a set of 2n fiducial points. We evaluate NASK with different values of n and results are shown in Fig 7. The performance witnesses a gigantic increase when n changes from 2 to 8 and then gradually converges. Therefore, we set n to 8 in our experiments.

In this paper, we propose a novel text detector NASK to facilitate the detection of arbitrary shape texts. The whole network consists of serially connected Text Instance Segmentation (TIS), Text RoI Pooling and Fiducial Point Expression module (FOX). TIS conducts text instance segmentation while Text RoI Pooling transforms rectangle text bounding boxes to the fixed size. Then FOX achieves a tight and precise text detection result by predicting several geometric attributes. To capture the long-range dependency, a self-attention based mechanism called Group Spatial and Channel Attention module (GSCA) is incorporated into TIS to augment the feature representation. The effectiveness and efficiency of the proposed NASK have been proved by experiments with H-mean reaching 82.2% and 80.5% for Total-Text and SCUT-CTW 1500 respectively.