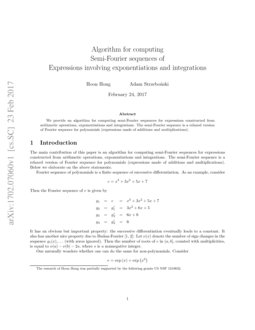 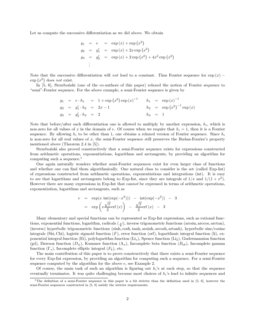 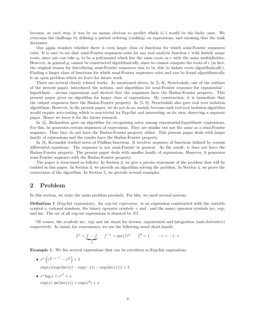 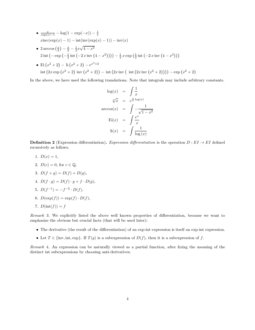 Fourier sequence of polynomials is a finite sequence of successive differentiation. As an example, consider

Then the Fourier sequence of e is given by

It has an obvious but important property: the successive differentiation eventually leads to a constant. It also has another nice property due to Budan-Fourier [1, 2]: Let ν(x) denote the number of sign changes in the sequence g1(x),… (with zeros ignored). Then the number of roots of e in (a,b], counted with multiplicities, is equal to ν(a)−ν(b)−2s, where s is a nonnegative integer.

One naturally wonders whether one can do the same for non-polynomials. Consider

Let us compute the successive differentiation as we did above. We obtain

Note that the successive differentiation will not lead to a constant. Thus Fourier sequence for exp(x)−exp(x2) does not exist.

One again naturally wonders whether semi-Fourier sequences exist for even larger class of functions and whether one can find them algorithmically. One natural class to consider is the set (called Exp-Int) of expressions constructed from arithmetic operations, exponentiations and integrations (int). It is easy to see that logarithms and arctangents belong to Exp-Int, since they are integrals of 1/x and 1/(1+x2). However there are many expressions in Exp-Int that cannot be expressed in terms of arithmetic operations, exponentiation, logarithms and arctangents, such as

Of course, the main task of such an algorithm is figuring out hi’s at each step, so that the sequence eventually terminates. It was quite challenging because most choices of hi’s lead to infinite sequences and because, at each step, it was by no means obvious to predict which hi’s would be the lucky ones. We overcame the challenge by defining a partial ordering (ranking) on expressions, and ensuring that the rank decreases.

There are several closely related works. As mentioned above, in [5, 6], Strzeboński, one of the authors of the present paper, introduced the notions, and algorithms for semi-Fourier sequence for exponential - logarithmic - arctan expressions and showed that the sequences have the Budan-Fourier property. This present paper gives an algorithm for larger class of expressions. By construction, it is immediate that the output sequences have the Budan-Fourier property. In [5, 6], Strzeboński also gave real root isolation algorithms. However, in the present paper, we do not do so, mainly because such real root isolation algorithm would require zero-testing which is non-trivial for Exp-Int and interesting on its own, deserving a separate paper. Hence we leave it for the future research.

In this section, we state the main problem precisely. For this, we need several notions.

Of course, the symbols inv, exp and int stand for inverse, exponential and integration (anti-derivative) respectively. As usual, for convenience, we use the following usual short-hands:

We list several expressions that can be rewritten as Exp-Int expressions.

In the above, we have used the following translations. Note that integrals may include arbitrary constants.

Expression differentiation is the operation D:EI→EI defined recursively as follows.

We explicitly listed the above well known properties of differentiation, because we want to emphasize the obvious but crucial facts (that will be used later):

An expression can be naturally viewed as a partial function, after fixing the meaning of the distinct int subexpressions by choosing anti-derivatives.

We write f↣g iff for every choice of anti-derivatives corresponding to the distinct int subexpressions in f and g and for every x in the domain of f, we have f(x)=g(x).

Now we are ready to state the problem precisely.

Devise an algorithm with the following specification.

a semi-Fourier sequence of e

In this section, we describe an algorithm that solves the problem posed in the previous section.

Let f,g∈EI. We say that f and g are equivalent, and write f∼g, if f can be transformed into g by applying the commutative ring properties of + and ⋅. We write f≲g if f is equivalent to a subexpression of g.

An extension tower E⟨f1,…,fr⟩⊆EI, where r≥0, is defined recursively as follows

The rank of an exp-integrate expression is defined recursively as follows:

a semi-Fourier sequence of e

We illustrate the algorithm EISF by tracing it on the input e from Example 2.

We illustrate the algorithm ETSF by tracing it on the input (f;f1,f2,f3), which is taken from Step 3 of Example 4.

The algorithm ETSF is recursive. Hence we trace the recursive calls.

4 Proof of Correctness of Algorithm

In this section, we prove that the main algorithm EISF is correct. We need to show the termination and the partial correctness. In the following subsections, we will show them one by one.

Let d be the function from E⟨f1,…,fr⟩ to N2 such that

Let ≺ be the binary relation over E⟨f1,…,fr⟩ such that

It is obvious but crucial to note that E⟨f1,…,fr⟩ does not contain infinite ≺-descending chains. In the following we will show that when ETSF makes a recursive call, the first argument decreases with ≺. Let f∈E⟨f1,…,fr⟩ be such that it contains at least one of f1,…,fr. Let k be maximal such that fk≾f and let d(f)=(k,n). Note