An expression in terms of (cyclotomic) harmonic sums can be simplified by the quasi-shuffle algebra in terms of the so-called basis sums. By construction, these sums are algebraically independent within the quasi-shuffle algebra. In this article we show that the basis sums can be represented within a tower of difference ring extensions where the constants remain unchanged. This property enables one to embed this difference ring for the (cyclotomic) harmonic sums into the ring of sequences. This construction implies that the sequences produced by the basis sums are algebraically independent over the rational sequences adjoined with the alternating sequence. 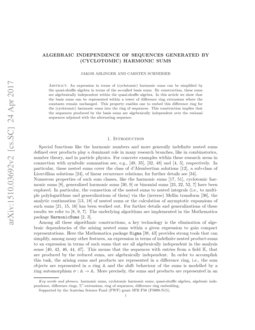 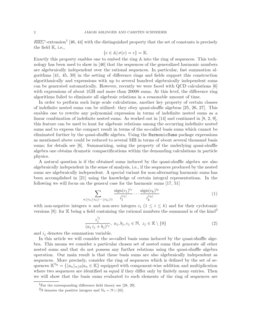 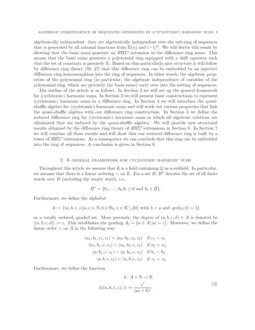 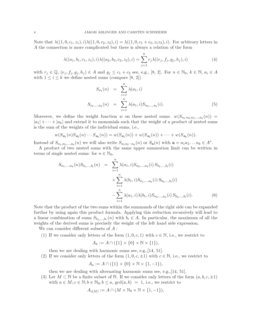 Special functions like the harmonic numbers and more generally indefinite nested sums defined over products play a dominant role in many research branches, like in combinatorics, number theory, and in particle physics. For concrete examples within these research areas in connection with symbolic summation see, e.g., [49, 35], [32, 48] and [4, 5], respectively. In particular, these nested sums cover the class of d’Alembertian solutions [12], a sub-class of Liouvillian solutions [24], of linear recurrence relations; for further details see [34]. Numerous properties of such sum classes, like the harmonic sums [17, 51], cyclotomic harmonic sums [8], generalized harmonic sums [30, 9] or binomial sums [23, 22, 52, 7] have been explored. In particular, the connection of the nested sums to nested integrals (i.e., to multiple polylogarithms and generalizations of them) via the (inverse) Mellin transform [36], the analytic continuation [13, 18] of nested sums or the calculation of asymptotic expansions of such sums [21, 15, 16] has been worked out. For further details and generalizations of these results we refer to [8, 9, 7]. The underlying algorithms are implemented in the Mathematica package HarmonicSums [2, 3].

Among all these algorithmic constructions, a key technology is the elimination of algebraic dependencies of the arising nested sums within a given expression to gain compact representations. Here the Mathematica package Sigma [38, 43] provides strong tools that can simplify, among many other features, an expression in terms of indefinite nested product-sums to an expression in terms of such sums that are all algebraically independent in the analysis sense [40, 42, 46, 44, 47]. This means that the sequences with entries from a field K, that are produced by the reduced sums, are algebraically independent. In order to accomplish this task, the arising sums and products are represented in a difference ring, i.e., the sum objects are represented in a ring A and the shift behaviour of the sums is modelled by a ring automorphism σ:A→A. More precisely, the sums and products are represented in an RΠΣ∗-extension111For the corresponding difference field theory see [28, 29]. [46, 44] with the distinguished property that the set of constants is precisely the field K, i.e.,

Exactly this property enables one to embed the ring A into the ring of sequences. This technology has been used to show in [46] that the sequences of the generalized harmonic numbers are algebraically independent over the rational sequences. In particular, fast summation algorithms [41, 45, 39] in the setting of difference rings and fields support this construction algorithmically and expressions with up to several hundred algebraically independent sums can be generated automatically. However, recently we were faced with QCD calculations [6] with expressions of about 1GB and more than 20000 sums. At this level, the difference ring algorithms failed to eliminate all algebraic relations in a reasonable amount of time.

A natural question is if the obtained sums induced by the quasi-shuffle algebra are also algebraically independent in the sense of analysis, i.e., if the sequences produced by the nested sums are algebraically independent. A special variant for non-alternating harmonic sums has been accomplished in [21] using the knowledge of certain integral representations. In the following we will focus on the general case for the harmonic sums [17, 51]

with non-negative integers n and non-zero integers ci (1≤i≤k) and for their cyclotomic versions [8]: for K being a field containing the rational numbers the summand is of the kind222N denotes the positive integers and N0=N∪{0}.

and ij denotes the summation variable.

Throughout this article we assume that K is a field containing Q as a subfield. In particular, we assume that there is a linear ordering < on K. For a set B, B∗ denotes the set of all finite words over B (including the empty word), i.e.,

Furthermore, we define the alphabet

as a totally ordered, graded set. More precisely, the degree of (a,b,c,d)∈A is denoted by |(a,b,c,d)|:=c. This establishes the grading Ai={a∈A||a|=i}. Moreover, we define the linear order < on A in the following way:

Furthermore, we define the function

Moreover, we define the weight function w on these nested sums: w(Sa1,a2,a3,…,ak(n))=|a1|+⋯+|ak| and extend it to monomials such that the weight of a product of nested sums is the sum of the weights of the individual sums, i.e.,

A product of two nested sums with the same upper summation limit can be written in terms of single nested sums: for n∈N0,

Note that the product of the two sums within the summands of the right side can be expanded further by using again this product formula. Applying this reduction recursively will lead to a linear combination of sums Sb1,…,br(n) with bi∈A. In particular, the maximum of all the weights of the derived sums is precisely the weight of the left hand side expression.

We can consider different subsets of A:

Note that for every finite subset M of N we have

Throughout this article we will assume that

3. A basic difference ring construction for the expression of H-sums

In the following we will define a difference ring in which we will represent the expressions of H-sums.

Sometimes we also use the notation f(n) to indicate that the expression depends on a symbolic variable n. We say that an expression e(n) of H-sums has no pole for all n∈N0 with n≥λ for some λ∈N0, if the rational functions occurring in e(n) do not introduce poles at any evaluation n→ν for ν∈N0 with ν≥λ. If this is the case, one can perform the evaluation e(ν) for all ν∈N with ν≥λ. For a more rigorous definition of indefinite nested product-sum expressions (containing as special case the H-sums) in terms of term algebras, we refer to [42] which is inspired by [31].

These expressions will be represented in a commutative ring A and the shift operator acting on the expressions in terms of H-sums will be rephrased by a ring automorphism σ:A→A. Such a tuple (A,σ) of a ring A equipped with a ring automorphism is also called difference ring; if A is a field, (A,σ) is also called a difference field. In such a difference ring we call c∈A a constant if σ(c)=c and denote the set of constants by

In general, const(A,σ) is a subring of (A,σ). But in most applications we take care that const(A,σ) itself forms a field.

Our construction will be accomplished step by step. Namely, suppose that we are given already a difference ring (AHd,σ) in which we succeeded in representing parts of our H-sums. In order to enrich this construction, we will extend the ring from AHd to AHd+1 and will extend the ring automorphism σ to a ring automorphism σ′:AHd+1→AHd+1, i.e., for any f∈AHd we have that σ′(f)=σ(f). We say that such a difference ring (AHd+1,σ′) is a difference ring extension of (AHd,σ); in short, we also write . Since σ and σ′ agree on AHd, we usually do not distinguish anymore between σ and σ′.

We start with the rational function field K(n) and define the field/ring automorphism σ:K(n)→K(n) with

It is easy to verify that const(K(n),σ)=const(K,σ)=K. So far, we can model rational expressions in n in the field K(n) and can shift these elements with σ.

Precisely, this difference ring (K(n)[x],σ) enables one to represent all rational expressions in n together with objects (−1)n that are rephrased by x.

Before we can continue with our construction for H-sums, we observe the following easy, but important fact.

We will use this lemma iteratively in order to adjoin all H-sums to the difference ring (K(n)[x],σ). This construction is done inductively on the weight of the sums. It is useful to define the following function (compare (3)):

To these sums we attach the variables

By construction (AHd,σ) is a difference ring extension of (AHd−1,σ).

Finally, we define the polynomial ring

with infinitely many variables, which represents all H-sums. In particular, we define the ring automorphism σ′:AH→AH as follows. For any f∈AH, we can choose a d∈N0 such that f∈AHd. This defines333Note that any other choice d′ with f∈AHd′ will deliver the same evaluation. σ′(f):=σ(f) with σ:AHd→AH% d. By construction, σ′|AHd=σ where σ is the automorphism of (AHd,σ). It is easy to see that (AH,σ′) is a difference ring and that it is a difference ring extension of (AHd,σ). Again we do not distinguish anymore between σ and σ′. To sum up, we get the chain of difference ring extensions

For convenience, we will also write ¯Sa1,…,ak for the variable s(d)j. In this way, we may write e.g.,

To give a résumé, we can express every expression of H-sums over K in (AH,σ). Conversely, if we are given a ring element f∈AH, we denote by expr(f) the expression that is obtained when all occurrences of x are replaced by (−1)n and all variables s(d)i are replaced by the attached H-sums with upper summation range n. This will lead to an expression of H-sums in n over K. In this way, we can jump between the function and difference ring worlds.

recall that for an expression e of H-sums, e(n) is used to emphasize the dependence on the symbolic variable n. If expr(f)(n) and expr(g)(n) have no poles for all n≥δ for some δ∈N0, then it follows that

The main goal of this article is to construct a difference ring, which represents all H-expressions and that can be embedded into the ring of sequences. As indicated already in the introduction, we will rely on the fact that the constants are precisely the elements K. The following example shows immediately, that (AH,σ) is a too naive construction.

Then one can easily verify that σ(f)=f. Even more, we get that expr(f)(λ)=0 for all λ∈N0, i.e., there are algebraic relations among these sums.

4. Quasi-shuffle algebras and the linearization operator

In order to eliminate such relations as given in Example 1, we will equip the difference ring construction (AH,σ) with the underlying quasi-shuffle algebra.

Let G be a totally ordered, graded set. The degree of a∈G is denoted by |a|. Let G∗ denote the free monoid over G, i.e.,

We extend the degree function to G∗ by |a1a2⋯an|=|a1|+|a2|+⋯+|an| for ai∈G and |ϵ|=0. Let R⊇Q be a commutative ring. The set of non-commutative polynomials over R is defined as

We define a new multiplication ∗ on R⟨G⟩ which is a generalisation of the shuffle product, by requiring that ∗ distributes with the addition. We will see that this product can be used to describe properties of H-sums; compare [25, 26, 27].

∗:R⟨G⟩×R⟨G⟩⟶R⟨G⟩ is called quasi-shuffle product, if it distributes with the addition and

We specialize the quasi-shuffle algebra from Definition 3 in order to model the H-sums accordingly. We consider the alphabet G=H and define the degree of a letter a by |{a}|=w({a}). Finally, we define

for some uniquely determined {d}i∈H∗,ci∈K∗ (compare [8]). In particular, we have that

This linearization will be carried over to AH. Consider the K(n)[x]-module

Finally, we extend L to AH by linearity.

Since (14) reflects precisely (6), we obtain the following lemma.

In particular, as already indicated in (1) we get

Clearly, we can consider V as a subset of AH, i.e., we can equip (AH,σ) with the linearization function L. Observe that for any f∈V we have that σ(f)∈V. In addition, we obtain the following lemma.