With massive explosion of social media such as Twitter and Instagram, people daily share billions of multimedia posts, containing images and text. Typically, text in these posts is short, informal and noisy, leading to ambiguities which can be resolved using images. In this paper we explore text-centric Named Entity Recognition task on these multimedia posts. We propose an end to end model which learns a joint representation of a text and an image. Our model extends multi-dimensional self attention technique, where now image helps to enhance relationship between words. Experiments show that our model is capable of capturing both textual and visual contexts with greater accuracy, achieving state-of-the-art results on Twitter multimodal Named Entity Recognition dataset. 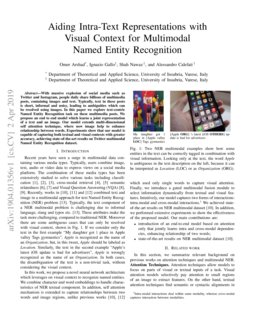 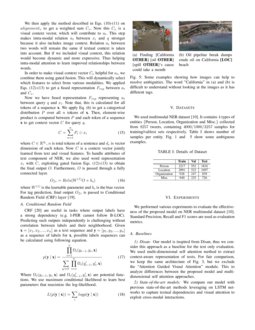 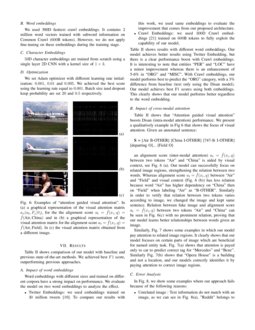 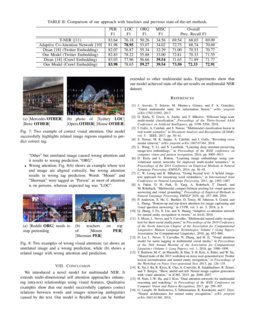 Social Media Analysis based on Semanticity of Streaming and Batch Data

Recent years have seen a surge in multimodal data containing various media types. Typically, users combine image, text, audio or video data to express views on a social media platform. The combination of these media types has been extensively studied to solve various tasks including classification [1, 2, 3], cross-modal retrieval [4, 5] semantic relatedness [6, 7] and Visual Question Answering (VQA) [8, 9]. Recently, works in [10, 11] and [12] combined text and image in a multimodal approach for text Named Entity Recognition (NER) problem [13]. Typically, the text component of a NER multmodal problem is challenging due to informal language, slang and typos etc. [13]. These attributes make the task more challenging, compared to traditional NER. Moreover there are some ambiguous cases that can only be resolved with visual context, shown in Fig. 1. If we consider only the text in the first example “My daughter got 1 place in Apple valley Tags gymnastics”, Apple is recognized as the name of an Organization, but, in this tweet, Apple should be labeled as Location. Similarly, the text in the second example “Apple’s latest iOS update is bad for advertisers”, Apple is wrongly recognized as the name of an Organization. In both cases, the disambiguation of the text is a non-trivial task, without considering the visual context.

In this work, we propose a novel neural network architecture which leverages on visual context to recognize named entities. We combine character and word embeddings to handle characteristics of NER textual component. In addition, self attention mechanism is extended to capture relationships between two words and image regions, unlike previous works

[10, 12] which used only single words to capture visual attention. Finally, we introduce a gated multimodal fusion module to select information dynamically from textual and visual features. Intuitively, our model captures two forms of interactions: intra-modal and cross-modal interactions.111Intra-modal interactions deal within same modality, whereas cross-modal captures interaction between modalities. We achieved state-of-the-art results on NER multimodal dataset [10]. In addition, we performed extensive experiments to show the effectiveness of the proposed model. Our main contributions are:

In this section, we summarize relevant background on previous works on attention techniques and multimodal NER. Attention Techniques.

. These works used bi-directional Long Short Term Memory (LSTM) networks to extract features from a sequence of words. The work in

[10] captures interactions between words and an image in a bi-directional way. However, it represents this interaction in a uni-directional manner. In our work, we extended multi-dimensional attention to jointly learn intra and cross-modal dependencies.

In this paper we propose a novel architecture, inspired from Disan [18], to learn a joint representation of text and image for multimodal NER. Our model improves the intra-text attention to learn enhanced representations exploiting the relevancy with images. Instead of learning text representations separately from textual context and then leveraging on image information [10] and [12], our model jointly learns shared semantics between intra-text representation and visual features. In next subsections, we first explain each module of our network and then, the proposed end to end model, shown in Fig. 3.

between elements coming from different sources. In Natural Language Processing, given a sequence of word embeddings

x=[x1,x2,...,xn] and the embedding of a query q, with xi,q∈Rde, the alignment score between xi and q can be calculated using the common additive attention:

is an activation function,

is a vector of weights and

Wq, Wx are weights matrices. A graphical representation of the additive attention is available in Fig. 2(a). Furthermore, we use a special case of attention called self attention in which both elements q and xi come from the same source.

f(xi,q) is a scalar score, which determines how important xi is to a query q. Alignment score between q and all tokens becomes:

Then, a probability distribution

p(z∣x,q) is calculated over a by applying softmax. This gives a measure on how much the token xi∈x is important to a query q.

that is the context vector for a query q.

Multi-dimensional attention [18] proposed for self attention, is an additional attention technique which computes the feature-wise score vector ^f(xi,q) described in Eq. (5) instead of computing the scalar score shown in Eq. (1).

where ^f(xi,q)∈Rde is a vector with the same length as xi, and Wa, Wq, Wx∈Rde×de are the weight matrices.

Softmax is applied to the output function ^f to compute categorical distribution p(z∣x,q) over all tokens.

To find the importance of each feature k in a word embedding xi, ^f(xi,q) becomes [^f(xi,q)]k and the categorical distribution is calculated as:

The multi-dimensional attention defined in Eq. (5) is known as ”token2token” self attention. It explores dependency between elements of the same source, i.e. query q and word xi from a single source x.

In order to obtain features F from an image I we use a pretrained VGG-19 model. We extracted features of different image regions from the last pooling layer which has a shape of 7×7×512. To simplify the calculations, we resized it to 49×512. We have N=49 regions with di=512 as dimension for each feature vector Fj with j∈[1,…,N]. Regional features of a given image are represented by the matrix F=VGG(I).

Text extracted from social media is usually informal. In addition, it contain many out of vocabulary words. Character level features can play a crucial role in handling such text. We use a 2D Convolutional Neural Network to learn character embeddings. A word

w is transformed into a sequence of characters c=[c1,c2,...,cn] where n is the word length. A convolutional operation of filter size 1×k is applied to the matrix W, where W∈Rde×n and de is the character embedding size. Then, we compute column-wise maximum operation to get the embedding for word w.

Our proposed model uses alignment score between two textual tokens to compute cross-modal attention, show in Fig. 4. Given a word and query q, their alignment score is calculated using Eq. (5).

where at is a feature-wise score vector with same length of xi. We calculate attention between at and image feature matrix F.

where av(at,Fj) is a vector representing a single row of the visual attention scores matrix between at and F, at∈Rde, Fj∈Rdi×N, N is number of image regions, Wi∈Rdi×de, Wt, Wv∈Rde×de are the weight matrices. To obtain the final visual attention matrix, we compute av, such that av ∈Rde×N

Then we normalize the scores av by applying Eq. (6) to get a probability distribution (columns-wise) over all regions of image.

The final output is a element-wise product between p(av) and F.

where Cv∈Rde, is a vector containing context vector for at.

Throughout our network, we used gated fusion to merge different modalities.

Our end to end network jointly learns intra and cross-modal dependencies. The architecture is shown in Fig. 3.

We then apply the method described in Eqs. (10)-(11) on alignmentv to get a weighted sum Cv. Now this Cv is a visual context vector, which will contribute to at. This step makes intra-modal relation at between xi and q stronger because it also includes image context. Relation at between two words will remain the same if textual context is taken into account. But if we included visual context, this relation would become dynamic and more expressive. Thus helping intra-modal attention to learn improved relationships between words.

In order to make visual context vector Cv helpful for at, we combine them using gated fusion. This will dynamically select which features to select from various modalities. We applied Eqs. (12)-(13) to get a fused representation Frep between at and Cv.

Now we have fused representation Frep representing at between query q and xi. Note that, this is calculated for all tokens of a sequence x. We apply Eq. (6) to get a categorical distribution P over all n tokens of x. Then, element-wise product is computed between P and each token of a sequence x to get context vector C for query q.

where C ∈Rde, n is total tokens of a sentence and de is vector dimension of each token. Now C is a context vector jointly learned from text and visual features. To handle attributes of text component of NER, we also used word representation xi with C, exploiting gated fusion Eqs. (12)-(13) to obtain the final output O. Furthermore, O is passed through a fully connected layer.

where W(1) is the learnable parameter and bo

is the bias vector. For tag prediction, final output

CRF [20] are useful in tasks where output labels have a strong dependency (e.g. I-PER cannot follow B-LOC). Predicting such outputs independently is challenging without correlation between labels and their neighborhood. Given x=[x1,x2,...,xn] as a text sequence and y=[y1,y2,...,yn] as a sequence of labels for x, possible labels sequences can be calculated using following equation.

Where Ωi(yi−1,yi,x) and Ωi(y′i−1,y′i,x) are potential functions. We use maximum conditional likelihood to learn best parameters that maximize the log-likelihood.

Our model is inspired from Disan, thus we consider this approach as a baseline for the text only evaluation. We used multi-dimensional self attention method to extract context-aware representation of texts. For fair comparison, we keep the same architecture of Fig. 3, but we exclude the “Attention Guided Visual Attention” module. This to analyze differences between the proposed model and multi-dimensional self attention approaches.

We compare our model with previous state-of-the-art methods leveraging on LSTM networks to capture textual dependencies and visual attention to exploit cross-modal interactions.

We used 300D fasttext crawl embeddings. It contains 2 million word vectors trained with subword information on Common Crawl (600B tokens). However, we do not apply fine-tuning on these embeddings during the training stage.

50D character embeddings are trained from scratch using a single layer 2D CNN with a kernel size of 1×3.

Word embeddings with different sizes and trained on different corpora have a strong impact on performance. We evaluate the model on two word embeddings to analyze the effect.

Table II shows results with different word embeddings. Our model achieves better results using Twitter Embedding, but there is a clear performance boost with Crawl embeddings. It is interesting to note that entities “PER” and “LOC” have a minor improvement whereas there is an enhancement of 5-6% in “ORG” and “MISC”. With Crawl embeddings, our model performs best to predict the “ORG” category, with a 3% difference from baseline (text only using the Disan model). Our model achieves best F1 scores using both embeddings. This clearly shows that our model performs better regardless to the word embedding.

Similarly, Fig. 7 shows some examples in which our model pay attention to related image regions. It clearly shows that our model focuses on certain parts of image which are beneficial for named entity task. Fig. 7(a) shows that attention is payed only to car to predict correct tag for “Mercedes” and “Benz”. Similarly Fig. 7(b) shows that “Opera House” is a building and not a location, and our models correctly identifies it by paying attention to correct image regions.

In Fig. 8, we show some examples where our approach fails because of the following reasons:

We introduced a novel model for multimodal NER. It extends multi-dimensional self attention approaches enhancing intra-text relationships using visual features. Qualitative examples show that our model successfully captures correct relations between words and images removing ambiguities caused by the text. Our model is flexible and can be further extended to other multimodal tasks. Experiments show that our model achieved state-of-the-art results on multimodal NER dataset.