AI-driven Development Is Here: Should You Worry?

AI-Driven Development Environments (AIDEs) Integrate the power of modern AI into IDEs like Visual Studio Code and JetBrains IntelliJ. By leveraging massive language models and the plethora of openly available source code, AIDEs promise to automate many of the obvious, routine tasks in programming. At the same time, AIDEs come with new challenges to think about, such as bias, legal compliance, security vulnerabilities, and their impact on learning programming. 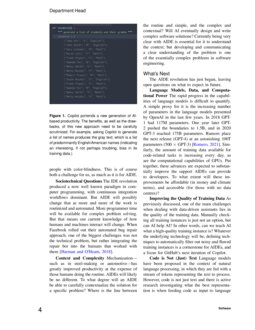 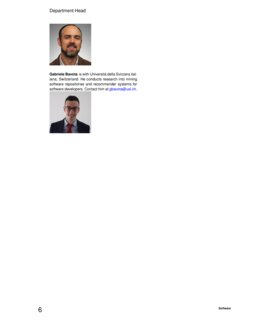 In this paper, we present the CPG analysis platform, which enables the t...
Konrad Weiss, et al. ∙

The Convergence of AI code and Cortical Functioning – a Commentary

Automate the mundane Much of software development is routine. Developers get a bug report, track down the bug, and file a patch; they wire library code together to leverage APIs; they need to display database records on a web page and handle any updates. Much of software development is also staggeringly complex and creative, too! Software is, as Grady Booch once wrote, “the invisible thread … on which we weave the fabric of computing.” A key developer task then is to carefully distinguish those tasks which are complex, and those which are obvious or complicated (Snowden et al., 2020). AIDEs can remove the accidental complexity from what are obvious tasks, just like the code showed earlier. An AIDE like Copilot is already capable of automating these routine tasks, and other technologies, such as the automated program repair work of Facebook’s SapFix tool (Marginean et al., 2019), are tackling similar routine tasks.

Automate API interactions Much of programming today is about framework and API-driven development: connecting to a third party service, processing the result, and sending the result back to the user. Just as often we work within an existing architectural framework, for example for web or mobile applications, and our programs are closely coupled with those library calls. Many of these library calls are routine and repetitive for each new variant of an app.

Teach Programming As programming languages and APIs proliferate, learning new approaches and syntax becomes more challenging. Stack Overflow is invaluable for specific answers to common, and not so common, programming problems. For example, how does one configure a particular plotting library such as R’s ggplot to change the background colour? But Stack Overflow, while incredibly helpful (we certainly could not program without it), requires one to leave the IDE to ask questions or perform search. AIDE promises the knowledge potential of Stack Overflow while avoiding continuous context switches between the IDE and the browser. And this will be useful for novices and experts alike. No more ‘yak shaving’333Yak shaving refers to doing a series of trivial tasks which distract you from the original, and important, goal. Compare with bikeshedding. trying to figure out the correct series of syntax calls for a given problem.

Like any software development, AIDE will come with a host of challenges to be overcome, challenges in traditional software concerns such as defects and security vulnerabilities, but in new areas as well.

Codex is trained on (54 million) public GitHub repositories, and the creators of these GitHub repositories agreed to Codex-like usage of their code. However, the Codex context of use was something most of us probably did not anticipate. Does Codex have the right to all the code it was trained on? For output the language model is a series of weights, so in theory, code produced is an amalgamation of the inputs. Accordingly to a recent study

Codex rarely quotes code verbatim from the training set and when this happens it is usually code largely reused across open source projects. Does Codex-created code violate copyright? Is it fair use? We don’t have an answer to this question, and open source licenses might need to be revisited to explicitly regulate the usage of code for training commercial code generation tools. Also, currently Codex output is the intellectual work product of the person who activated Codex, but this is currently because Codex is a beta, and these terms might change.

Learning to Program The nature of learning programming will change dramatically with AIDEs. Whether these assistants will speed up or slow down the learning process is currently an open question. On the one hand, novice programmers can benefit from AIDEs by receiving recommendations useful to deal with tasks they struggle with. On the other hand, the risk of not fully understanding the received recommendations and just accept them is there. On top of this, AIDEs do also pose challenges for instructors: Codex is already so good it might surpass first year university students in introduction to programming (CS1) courses. Some initial results in our testing show it is relatively simple to get Codex to generate reasonable (passing) solutions. CS1 programming assignments must change to handle those students who can merely pass the entire assignment spec to Codex for a solution.

. Like any trained model, Codex and other AIDEs are only as good as the training data. And although Codex has done extensive work filtering low-quality inputs, there remains code that has bugs, that has technical debt, or that uses outdated APIs. Subtle security holes can easily persist even in high-quality, high-volume repositories (consider the OpenSSH Heartbleed incident), and recent work showed how deep learning models can learn vulnerable code and inject it during autocompletion

(Schuster et al., 2020). AIDE demands that humans inspect its outputs carefully, but if we use it to create code for a problem we don’t fully understand, we won’t be able to understand its outputs either.

More worrisome is that the language model reflects the biases that we humans have. For example, asking Copilot to generate a list of names produces a list of predominantly English/American names (Fig. 1). Plotting suggestions generate graphs that fail to accommodate people with color-blindness. This is of course both a challenge for us, as much as it is for AIDE.

Sociotechnical Questions The IDE revolution produced a now well known paradigm in computer programming, with continuous integration workflows dominant. But AIDE will possibly change that as more and more of the work is routinized and automated. More programmer time will be available for complex problem solving. But that means our current knowledge of how humans and machines interact will change. When Facebook rolled out their automated bug repair approach, one of the biggest challenges was not the technical problem, but rather integrating the repair bot into the humans that worked with them (Harman and OHearn, 2018).

Context and Complexity Mechanization—such as in steel-making or automotive—has greatly improved productivity at the expense of those humans doing the routine. AIDEs will likely be no different. To what degree will an AIDE be able to carefully contextualize the solution for a specific problem? Where is the line between the routine and simple, and the complex and contextual? Will AI eventually design and write complex software solutions? Currently being very clear with AIDE is essential for it to understand the context; but developing and communicating a clear understanding of the problem is one of the essentially complex problems in software engineering.

The AIDE revolution has just begun, leaving open questions on what to expect in future.

Language Models, Data, and Computational Power The rapid progress in the capabilities of language models is difficult to quantify. A simple proxy for it is the increasing number of parameters in the language models presented by OpenAI in the last few years. In 2018 GPT-1 had 117M parameters. One year later GPT-2 pushed the boundaries to 1.5B, and in 2020 GPT-3 reached 175B parameters. Rumors place the next release (GPT-4) at an astonishing 100T parameters (500 × GPT-3) (Romero, 2021). Similarly, the amount of training data available for code-related tasks is increasing every day, as are the computational capabilities of GPUs. Put together, these advances are expected to substantially improve the support AIDEs can provide to developers. To what extent will these improvements be affordable (in money and climate terms), and accessible (for those with no data centres)?

Improving the Quality of Training Data As previously discussed, one of the main challenges when dealing with data-driven assistants lies in the quality of the training data. Manually checking all training instances is just not an option, but can AI help AI? In other words, can we teach AI what a high-quality training instance is? Whatever the underlying technology will be, defining techniques to automatically filter out noisy and flawed training instances is a cornerstone for AIDEs, and a focus for GitHub’s next iteration of Copilot.

Code is Not (Just) Text

Language models have been proposed in the context of natural language processing, in which they are fed with a stream of tokens representing the text to process. However, code is not just text and there is active research investigating what the best representation is when feeding code as input to language models. For example, structural information can be extracted from the code Abstract Syntax Tree (AST) and used to boost the model’s performance.

Consumer-related Customization While Copilot is able to provide code recommendations that are tailored for the specific coding task at hand, no customization is performed when it comes to the developer receiving such recommendation. However, two developers having a different technical background, coding history, and skills, may benefit from different recommendations. For example, more expert developers working on real-time software are likely to appreciate multi-threading solutions to a given task, while newcomers may be confused by its usage. Customizing the recommendations based on the target developer can substantially increase the usefulness of AIDEs.

AIDE Learning Rate A last point worth discussing is the learning rate we can expect from AIDEs, namely the pace at which they’ll be able to improve their capabilities. All the above-discussed points can contribute to that, but it’s unclear when the AI will be able to pass a programmer’s Turing Test, for example submitting pull requests that reviewers cannot distinguish from a human’s submission.

An important truism in software development is Fred Brook’s maxim “there is no silver bullet”, derived from his insight into essential (inherent) complexity versus accidental (self-imposed) complexity. Like any new approach to our challenging field, AIDE is unlikely to become a panacea for software development. But it does seem to portend an important shift in how we develop software, and just might remove some of the accidental complexity in our projects.