We propose an aggregation scheme for methods that control the false discovery rate (FDR). Our scheme retains the underlying methods' FDR guarantees in theory and can decrease FDR and increase power in practice. 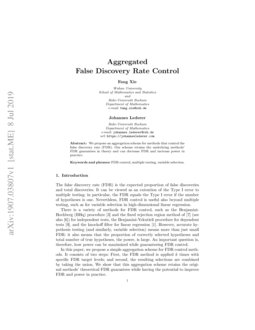 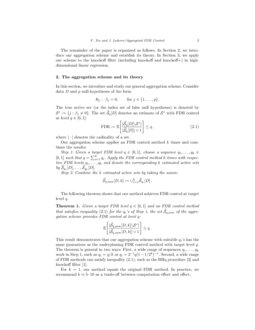 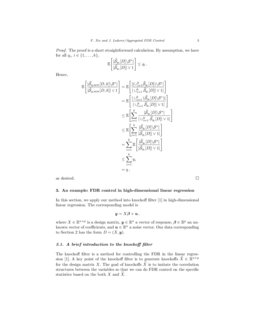 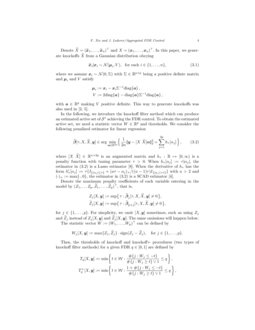 A Q-Q plot aids interpretation of the False Discovery Rate

The false discovery rate (FDR) is the expected proportion of false discoveries and total discoveries. It can be viewed as an extention of the Type I error to multiple testing; in particular, the FDR equals the Type I error if the number of hypotheses is one. Neverthless, FDR control is useful also beyond multiple testing, such as for variable selection in high-dimensional linear regression.

There is a variety of methods for FDR control, such as the Benjamini-Hochberg (BHq) procedure [3] and the fixed rejection region method of [7] (see also [6]) for independent tests, the Benjamini-Yekutieli procedure for dependent tests [9], and the knockoff filter for linear regression [1]. However, accurate hypothesis testing (and similarly, variable selection) means more than just small FDR: it also means that the proportion of correctly selected hypotheses and total number of true hypotheses, the power, is large. An important question is, therefore, how power can be maximized while guaranteeing FDR control.

In this paper, we propose a simple aggregation scheme for FDR control methods. It consists of two steps: First, the FDR method is applied k times with specific FDR target levels; and second, the resulting selections are combined by taking the union. We show that this aggregation scheme retains the original methods’ theoretical FDR guarantees while having the potential to improve FDR and power in practice.

The remainder of the paper is organized as follows. In Section 2, we introduce our aggregation scheme and establish its theory. In Section 3, we apply our scheme to the knockoff filter (including knockoff and knockoff+) in high-dimensional linear regression.

2 The aggregation scheme and its theory

In this section, we introduce and study our general aggregation scheme. Consider data D and p null-hypotheses of the form

The true active set (or the index set of false null hypotheses) is denoted by S∗:={j:βj≠0}. The set ˆSq[D]

denotes an estimate of

where |⋅| denotes the cadinality of a set.

Given a target FDR level q∈[0,1] and an FDR control method that satisfies inequality (2.1) for the qi’s of Step 1, the set ˆSq,new of the aggregation scheme provides FDR control at level q:

This result demonstrates that our aggregation scheme with suitable qi’s has the same guarantees as the underpinning FDR control method with target level q. The theorem is general in two ways: First, a wide range of sequences q1,…,qk work in Step 1, such as qi=q/k or qi=2−iq(1−1/2k)−1. Second, a wide range of FDR methods can satisfy inequality (2.1), such as the BHq procedure [3] and knockoff filter [1].

For k=1, our method equals the original FDR method. In practice, we recommend k≈5\ndash10 as a trade-off between computation effort and effect.

The proof is a short straightforward calculation. By assumption, we have for all qi, i∈{1,…,k},

In this section, we apply our method into knockoff filter [1] in high-dimensional linear regression. The corresponding model is

a vector of response,

β∈Rp an unknown vector of coefficients, and u∈Rn a noise vector. Our data corresponding to Section 2 has the form D=(X,y).

3.1 A brief introduction to the knockoff filter

from a Gaussian distribution obeying

with a∈Rp making V positive definite. This way to generate knockoffs was also used in [2, 5].

Denote the maximum penalty coefficients of each variable entering in the model by (Z1,…Zp,˜Z1,…,˜Zp)⊤, that is,

The statistic vector W:=(W1,…,Wp)⊤ can be defined by

Then, the thresholds of knockoff and knockoff+ procedures (two types of knockoff filter methods) for a given FDR q∈[0,1] are defined by

Thus, the coresponding estimated active sets are defined as

From Theorem 2 of [1], we know that the estimated active sets ˆS+q obtained by the knockoff+ procedure satisfy the inequlity (2.1). For knockoff procedure, we can not obtain this theoretical bound of FDR directly, since Theorem 1 in [1] only gave the same bound for an approximate FDR which is less or equal to the FDR.

3.2 Application of the aggregation scheme

After introducing the knockoff filter, we plug it into our aggregation scheme and also show the simulations results of this application.

Step 1: Apply the knockoff (or knockoff+) procedure above k times with respective target FDR qi’s above and denote the corresponding k estimated active sets by ˆSq1,…,ˆSqk (or ˆS+q1,…,ˆS+qk).

In the following, we show the simulation results which support our theoretical results. In addition, we also exhibit the performances of the selection accuracy.

for our scheme with knockoff procedure, while for that with knockoff+ procedure, ˆSmq,new[k] is replaced by ˆS+,mq,new[k]. The empirical selection accuracy is defined as