We discuss an agent-based approach to proof design and implementation, which we call Lemma Flow Diagram (LFD). This approach is based on the multicut rule with shared cuts. This approach is modular and easy to use, read and automate. Thus, we consider LFD an appealing alternative to `flow proof' which is popular in mathematical education. Some examples are provided. 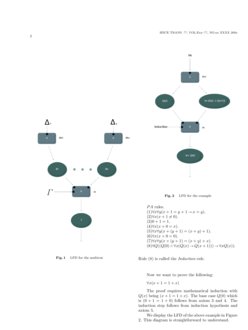 Proofs typically have a great level of complexity and therefore require a careful proof design to reduce their complexity. Despite its importance, proof design has received little attention. This is in contrast to the situation where proof procedures – natural deduction, resolution and sequent systems, etc – are well-studied.

In fact, it is a set of lemmas that makes proofs reative, diverse and interesting. In contrast, proofs without lemmas are rather mechanical, unimaginative and quite awkward.

As we shall see, our design tool is natural and very easy to use, read and automate. This is analogous to the situation where people have introduced software design tools – UML, etc – to design complex software. LFD is modeled after the interactive computing model of Computability Logic [1]–[5] and its distributed variant with agent parameters [6].

Our starting point for building lemma-based proofs is the multicut(MC) rule. The MC rule expresses a form of modus pones – or lemma-based reasoning – which is the key element in compact proof design.

Suppose we have well chosen lemmas B1,…,Bn. Then the (distributed version of) MC rule is of the form:

Here, Γ,Δ are a set of formulas, B,C are formulas, and each m,m1,…,mn is an agent/machine. That is, each mi tries to prove Bi with respect to Δi.

A second, alternative way is to represent the MC rule with “sharing”. This rule, which we call the MC’ rule, is shown below:

Here, Δi acts as the knowledgebase of mi and Bmii acts as a query Bi to mi.

This MC’ rule leads to the diagram in Figure 1.

In the diagram, note that each lemma Bi is shared between mi and mi+1. We call this diagram LFD with the following features:

LFD can be seen as a modular alternative to the “flow proof” which is popular in mathematical education.

As an example of LFD, we will look at Peano Arithmetic (PA). PA is formulated with the usual 0,1,+,×,=. This is shown below.

Rule (8) is called the Induction rule.

Now we want to prove the following:

The proof requires mathematical induction with Q(x) being (x+1=1+x). The base case Q(0) which is (0+1=1+0) follows from axiom 3 and 4. The induction step follows from induction hypothesis and axiom 5.

We display the LFD of the above example in Figure 2. This diagram is straightforward to understand.

To represent the ‘querying’ formulas in the MC’ rule, we need a new representation language, because they are not allowed in classical logic. For this reason, we introduce FOLΩ which provides an elegant solution in this regard.

FOLΩ is based on the game semantics. For this reason, we review the the game-semantical meanings of first-order logic[3].

There are two special atoms ⊤ and ⊥. ⊤ is always true, and ⊥ is always false.

Negation ¬ is a role-switch operation: \small¬A is obtained from A by turning ⊤’s moves and wins into ⊥’s moves and wins, and vice versa. For example, if Chess means the game of chess from the view of the black player, then ¬Chess is the same game from the of view of the white player.

The parallel operations deal with concurrent computations. Playing A\small∧B or A\small∨B means playing, in parallel, the two games A and B. In A\small∧B, ⊤ is considered the winner if it wins in both of the components, while in A\small∨B it is sufficient to win in one of the components.

The blind quantifiers ∀xA and ∃xA model information hiding with ∃x meaning ⊤’s choices, and ∀x meaning choices by ⊥. In both cases, the value of x is unknown or invisible to the opponent.

Following the ideas in [6], we introduce FOLΩ, a slight extension to FOL with agent parameters. Let F be a formula in first-order logic. We introduce a new env-annotated formula Fω which reads as ‘play F against an agent ω. For Fω, we say ω is the matching environment of F.

In introducing agent parameters to a formula F, some formulas turn out to be difficult to process. ‘Environment-switching’ formulas are such examples. In them, the machine initially provides a service F against agent w and then switches to provide another service to another agent u inside F. This kind of formulas are difficult to process. This leads to the following definition:

The class of FOLΩ-formulas is defined as the smallest set of expressions such that (a) For any FOL-formula F and any agent ω, Fω is in it and, (b) if H and J are in it, then so are .

Given a FOLΩ-formula H, the diagram of H can be easily obtained.

Given a FOLΩ-formula H, the diagram of H – denoted by diagram(H) – is obtained by the rules in Figure 3. There, F is a FOL-formula and H,J are FOLΩ-formulas. Further, A is the current machine, W is an environment.

4 An Example: Encoding the Peano Axiom

The diagram in Section 2 corresponds to the following FOLΩ. The (KB of) agent m1 is shown below.

Our language permits ‘querying knowledge’ of the form Qω in KB. This requires the current machine to invoke the query Q to the agent ω. Now let us consider the m agent which handles mathematical induction. It contains the induction rule and two querying knowledges Q(0)m1 and (∀x(Q(x)\small→Q(x+1)))m1. Note that the induction rule is technically not first-order but it does not affect our main argument.

Last, the theorem to prove corresponds to the query ?- ∀x(x+1=1+x) with respect to the m agent.

It can be easily observed that the above code can be automated. This leads to the notion of Lemma Flow Theorem Proving. Now, solving the above goal has the following strategy: first solve both the query Q(0)m1 and (∀x(Q(x)\small→Q(x+1)))m1 with respect to m1 and then solve ∀x(x+1=1+x) with respect to m. Note that all three attempts must succeed for ∀x(x+1=1+x) to be true.

In this paper, we have considered a proof design tool called LFD and a distributed first-order logic FOLΩ. Our diagram allows modular, distributed proof design. It is therefore useful for reading/writing/automating proofs. FOLΩ has a simple syntax and semantics and is well-suited to representing distributed KB [7].

This work was supported by DongA University Research Fund.