Age of Information in Poisson Networks

The age of information (AoI) has been extensively studied in recent years. However, few works have focused on the analysis of AoI in large wireless networks. In this work, we analyze this metric to characterize timeliness in a Poisson bipolar network, in which spatial distribution, fading, and interference are taken into consideration. We further study the effect of deadline constraint on the AoI. We derive upper and lower bounds for the cumulative distribution function (cdf) of the average age in network. Numerical results show that the inclusion of deadline constraint can substantially improve the performance of the system. 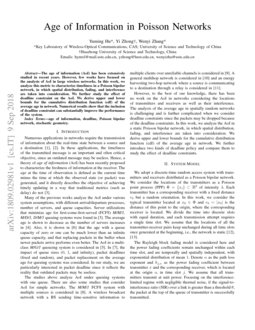 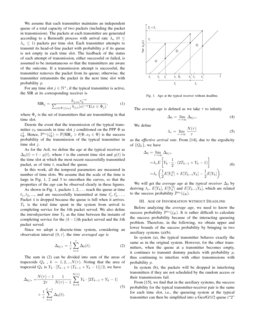 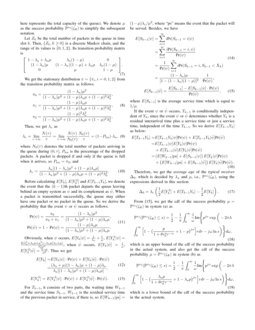 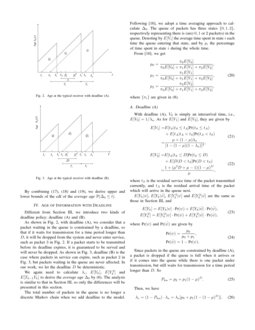 Numerous applications in networks require the transmission of information about the real-time state between a source and a destination[1, 2]. In these applications, the timeliness of the transmitted message is an important and often critical objective, since an outdated message may be useless. Hence, a theory of age of information (AoI) has been recently proposed to characterize the freshness of information at the receiver. The age at the time of observation is defined as the current time minus the time at which the observed state (or packet) was generated, and it directly describes the objective of achieving timely updating in a way that traditional metrics (such as delay) do not[3].

Many of the previous works analyze the AoI under various system assumptions, with different arrival/departure processes, number of servers, and queue capacities. Server utilizations that minimize age for first-come-first-served (FCFS) M/M/1, M/D/1, D/M/1 queuing systems were found in [3]. The average age is shown to decrease as the number of servers increases in [4]. Also, it is shown in [6] that the age with a queue capacity of zero or one can be much lower than an infinite queue capacity, and that replacing packets in the buffer when newer packets arrive performs even better. The AoI in a multi-class M/G/1 queueing system is considered in [5]. In [7], the impact of queue sizes (0, 1, and infinity), packet deadlines (fixed and random), and packet replacement on the average age for queuing systems was considered. In our study, we are particularly interested in packet deadline since it reflects the reality that outdated packets may be useless.

However, to the best of our knowledge, there has been no work on the AoI in networks considering the locations of transmitters and receivers as well as their interference. The analysis of the average age in spatially random networks is challenging and is further complicated when we consider deadline constraints since the packets may be dropped because of the deadline constraints. In this work, we analyze the AoI in a static Poisson bipolar network, in which spatial distribution, fading, and interference are taken into consideration. We derive upper and lower bounds for the cumulative distribution function (cdf) of the average age in network. We further introduce two kinds of deadline policy and compare them to study the effect of deadline constraints.

We adopt a discrete-time random access system with transmitters and receivers distributed as a Poisson bipolar network. We consider the locations of the transmitters as a Poisson point process (PPP) Φ={xi}⊂R2 of intensity λ. Each transmitter has a corresponding receiver with a fixed distance r0 but a random orientation. In this work, we consider the typical transmitter located at x0∈Φ and r0=|x0| is the distance of this point to the origin, where the corresponding receiver is located. We divide the time into discrete slots with equal duration, and each transmission attempt requires a single time slot. We assume that the locations of all the transmitter-receiver pairs keep unchanged during all time slots once generated at the beginning, i.e., the network is static[12, 13].

The Rayleigh block fading model is considered here and the power fading coefficients remain unchanged within each time slot, and are temporally and spatially independent, with exponential distribution of mean

1. Denote α as the path loss exponent and hj,x as the power fading coefficient between transmitter x and the corresponding receiver, which is located at the origin o, in time slot j. We assume that all transmitters transmit at unit power. Focusing on the interference-limited regime with negligible thermal noise, if the signal-to-interference ratio (SIR) over a link is greater than a threshold θ, the packet at the top of the queue of transmitter is successfully transmitted.

We assume that each transmitter maintains an independent queue of a total capacity of two packets (including the packet in transmission). The packets at each transmitter are generated according to a Bernoulli process with arrival rate λa (0≤λa≤1

) packets per time slot. Each transmitter attempts to transmit its head-of-line packet with probability

For any time slot j∈N+, if the typical transmitter is active, the SIR at its corresponding receiver is

where Φj is the set of transmitters that are transmitting in that time slot.

As for the AoI, we define the age at the typical receiver as Δ0(t)=t−g(t), where t is the current time slot and g(t) is the time slot at which the most recent successfully transmitted packet, as of time t, reached the queue.

In this work, all the temporal parameters are measured in number of time slots. We assume that the scale of the time is large in Fig. 1, 2 and 3 to smoothen the curves, so that the properties of the age can be observed clearly in these figures.

Since we adopt a discrete-time system, considering an observation interval (0,τ]. the time averaged age is

The average age is defined as we take τ to infinity

as the effective arrival rate. From [14], due to the ergodicity of {Qk}, we have

We will get the average age at the typical receiver Δ0 by deriving λe, E[Yk], E[Y2k] and E[Tk−1Yk], which are related to the success probability Px0(ζΦ).

Iii Age of Information without Deadline

In system (b), the packets will be dropped in interfering transmitters if they are not scheduled by the random access or their transmissions fail.

From [15], we find that in the auxiliary systems, the success probability for the typical transmitter-receiver pair is the same for each time slot, i.e., the queueing system at the typical transmitter can then be simplified into a Geo/G/1/2 queue (“2” here represents the total capacity of the queue). We denote μ as the success probability Px0(ζΦ) to simplify the subsequent notation.

Let Zk be the total number of packets in the queue in time slot k. Then, {Zk,k≥0}

is a discrete Markov chain, and the range of its values is

{0,1,2}. Its transition probability matrix is

We get the stationary distribution π={πi,i=0,1,2} from the transition probability matrix as follows:

Then, we get λe as

where N0(τ) denotes the total number of packets arriving in the queue during (0,τ], Plos is the percentage of the dropped packets. A packet is dropped if and only if the queue is full when it arrives, so Plos=π2, and

Before calculating E[Yk], E[Y2k] and E[Tk−1Yk], we denote the event that the (k−1)th packet departs the queue leaving behind an empty system as ψ and its complement as ¯ψ. When a packet is transmitted successfully, the queue may either have one packet or no packet in the queue. So we derive the probability that the event ψ or ¯ψ occurs as follows.

For Tk−1, it consists of two parts, the waiting time Wk−1 and the service time Sk−1. Wk−1 is the residual service time of the previous packet in service, if there is, so E[Wk−1|ps]=(1−μ)λe/μ2, where “ps” means the event that the packet will be served. Besides, we have

Therefore, we get the average age of the typical receiver Δ0, which is decided by λa and μ, i.e., Px0(ζΦ), using the expressions derived in this section.

which is a lower bound of the cdf of the success probability in the actual system.

Iv Age of Information with Deadline

Different from Section III, we introduce two kinds of deadline policy: deadline (A) and (B).

As shown in Fig. 2, with deadline (A), we consider that a packet waiting in the queue is constrained by a deadline, so that if it waits for transmission for a time period longer than D, it will be dropped from the system and never enter service, such as packet 3 in Fig. 2. If a packet starts to be transmitted before its deadline expires, it is guaranteed to be served and will never be dropped. As shown in Fig. 3, deadline (B) is the case where packets in service can expire, such as packet 2 in Fig. 3, but packets waiting in the queue are never affected. In our work, we let the deadline D be deterministic.

We again need to calculate λe, E[Yk], E[Y2k] and E[Tk−1Yk] to derive the average age Δ0 by (6). The analysis is similar to that in Section III, so only the differences will be presented in this section.

The total number of packets in the queue is no longer a discrete Markov chain when we add deadline to the model. Following [16], we adopt a time averaging approach to calculate Δ0. The queue of packets has three states {0,1,2}, respectively representing there is (are) 0,1 or 2 packet(s) in the queue. Denoting by E[Vi] the average time spent in state i each time the queue entering that state, and by pi the percentage of time spent in state i during the whole time.

Since packets in the queue are constrained by deadline (A), a packet is dropped if the queue is full when it arrives or if it comes into the queue while there is one packet under transmission, but still waits for transmission for a time period longer than D. So

Since packets in the queue are constrained by deadline (B), a packet is dropped if the queue is full when it arrives or it comes into the queue while there is one or no packet under transmission, but its transmission time is longer than D. Thus

The average waiting time is

Fig. 5 plots the lower and upper bounds for the cdf of mean age with deadline (A) and without deadline. It shows that the use of an appropriate packet deadline (A), which constrains the waiting times in the queue, can make the mean age decrease.

In this paper, we investigated the AoI of a static Poisson bipolar network. We derive upper and lower bounds for the cdf of the mean age without deadline, with deadline (A) and deadline (B), respectively. Our results show that the use of an appropriate packet deadline policy can reduce the mean age in network, and deadline (A), which affects the waiting times in the queue, is usually better than deadline (B), which constrains the packets under transmission.

This work was supported in part by the Key Research Program of Frontier Sciences of CAS under Grant QYZDYSSW-JSC003, by the National Natural Science Foundation of China under Grants 61722114 and 61701183, and by the Fundamental Research Funds for the Central Universities under Grants WK3500000003, WK3500000005 and 2018KFYYXJJ139.