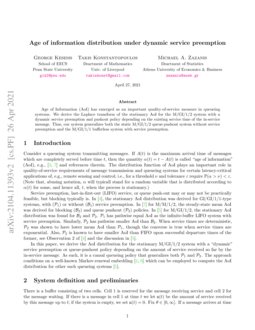 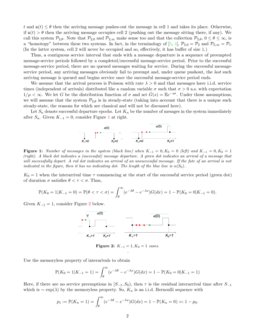 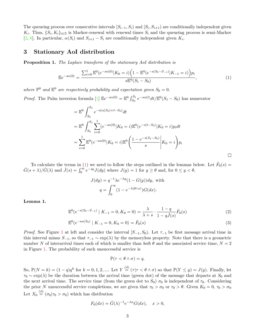 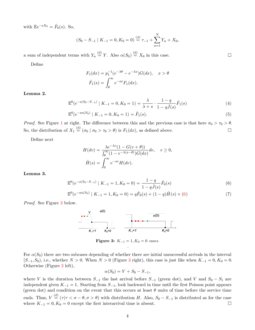 Consider a queueing system transmitting messages. If α(t) is the arrival time of the last completely served message before time t, then the quantity t−α(t) is called “age of information” (AoI), e.g., [3, 7] and references therein. The distribution function of AoI plays an important role in quality-of-service requirements of message transmission and queueing systems for certain latency-critical applications of, e.g., remote sensing and control; i.e., for a threshold ν and tolerance ε require P(α>ν)<ε. (Note that, abusing notation, α

α(t) for some, and hence all, t, when the process is stationary.)

Service preemption, last-in-first-out (LIFO) service, or queue push-out may or may not be practically feasible, but blocking typically is. In [4], the stationary AoI distribution was derived for GI/GI/1/1-type systems, with (P1) or without (B1) service preemption. In [7] for M/M/1/2, the steady-state mean AoI was derived for blocking (B2) and queue pushout (P2) policies. In [5] for M/GI/1/2, the stationary AoI distribution was found for B2 and P2. P1 has pathwise equal AoI as the infinite-buffer LIFO system with service preemption. Similarly, P2 has pathwise smaller AoI than B2. When service times are deterministic, P2 was shown to have lower mean AoI than P1, though the converse is true when service times are exponential. Also, P2 is known to have smaller AoI than FIFO upon successful departure times of the former, see Observation 2 of [4] and the discussion in [5].

In this paper, we derive the AoI distribution for the stationary M/GI/1/2 system with a “dynamic” service preemption or queue-pushout policy depending on the amount of service received so far by the in-service message. As such, it is a causal queueing policy that generalizes both P1 and P2. The approach conditions on a well-known Markov-renewal embedding [2, 6] which can be employed to compute the AoI distribution for other such queueing systems [5].

There is a buffer consisting of two cells. Cell 1 is reserved for the message receiving service and cell 2 for the message waiting. If there is a message in cell 1 at time t we let u(t) be the amount of service received by this message up to t; if the system is empty, we set u(t)=0. Fix θ∈[0,∞]. If a message arrives at time t and u(t)≤θ then the arriving message pushes-out the message in cell 1 and takes its place. Otherwise, if u(t)>θ then the arriving message occupies cell 2 (pushing out the message sitting there, if any). We call this system P2,θ. Note that P2,0 and P2,∞ make sense too and that the collection P2,θ, 0≤θ≤∞, is a “homotopy” between these two systems. In fact, in the terminology of [5, 4], P2,0=P2 and P2,∞=P1. (In the latter system, cell 2 will never be occupied and so, effectively, it has buffer of size 1.)

We assume that the arrival process is Poisson with rate λ>0 and that messages have i.i.d. service times (independent of arrivals) distributed like a random variable σ such that σ>0 a.s. with expectation 1/μ<∞. We let G be the distribution function of σ and set ^G(s)=Ee−sσ. Under these assumptions, we will assume that the system P2,θ is in steady-state (taking into account that there is a unique such steady-state, the reasons for which are classical and will not be discussed here).

Kn be the number of mesages in the system immediately after Sn. Given K−1=0, consider Figure 1 at right.

K0=1 when the interarrival time τ commencing at the start of the successful service period (green dot) of duration σ satisfies θ<τ<σ. Thus,

. Use the memoryless property of interarivals to obtain

Here, if there are no service preemptions in [S−1,S0), then τ is the residual interarrival time after S−1 which is ∼exp(λ) by the memoryless property. So, Kn is an i.i.d. Bernoulli sequence with

The Laplace transform of the stationary AoI distribution is

are respectively probability and expectation given

See Figure 1 at left and consider the interval [S−1,S0). Let τ−1 be first message arrival time in this interval minus S−1, so that τ−1∼exp(λ) by the memoryless property. Note that there is a geometric number N of interarrival times each of which is smaller than both θ and the associated service time; N=2 in Figure 1. The probability of such unsuccessful service is

where V is the duration between S−1 the last arrival before S−1 (green dot), and V and S0−S1 are independent given K−1=1. Starting from S−1, look backward in time until the first Poisson point appears (green dot) and condition on the event that this occurs at least θ units of time before the service time ends. Thus, V\rm(d)=(τ|τ<σ−θ,σ>θ) with distribution H. Also, S0−S−1 is distributed as for the case where K−1=0,K0=0 except the first interarrival time is absent. ∎

The final stage: The formulas obtained in the lemmas above must now be substituted into (1) as follows:

The stationary mean AoI can be obtained from (1) and numerically minimized over θ for a given set of model parameters for an arbitrary service-time distribution G. For example, for exponential service times, G(dx)=μe−μxdx, and θ=∞ (P1) achieves minimal Eα(0)=μ−1+λ−1 [7, 4]. For constant service time G(dx)=δ1/μ(dx), the P2 system with θ=0 has 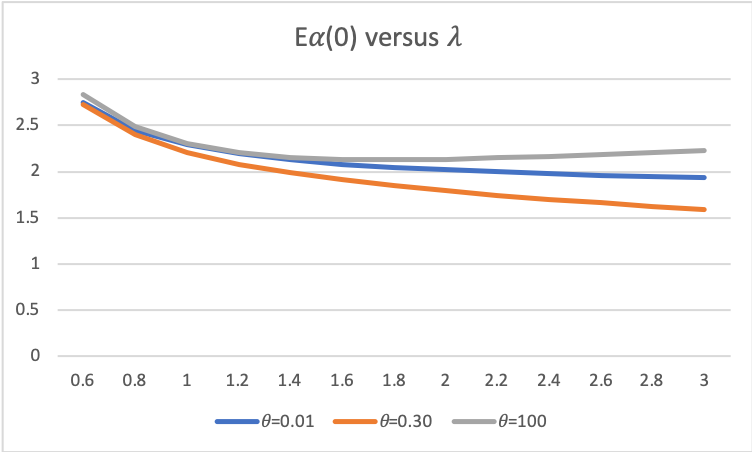 Consider the policy where a message arriving at time t does not preempt the in-service message (but joins the queue in cell 2) if 0<u(t)<θ, otherwise the message captures the server. The stationary AoI distribution of this policy is similarly derived and, for some service-time distributions, it may have lower AoI than P2,θ.