Natural objects can be subject to various transformations yet still preserve properties that we refer to as invariants. Here, we use definitions of affine invariant arclength for surfaces in R^3 in order to extend the set of existing non-rigid shape analysis tools. In fact, we show that by re-defining the surface metric as its equi-affine version, the surface with its modified metric tensor can be treated as a canonical Euclidean object on which most classical Euclidean processing and analysis tools can be applied. The new definition of a metric is used to extend the fast marching method technique for computing geodesic distances on surfaces, where now, the distances are defined with respect to an affine invariant arclength. Applications of the proposed framework demonstrate its invariance, efficiency, and accuracy in shape analysis. 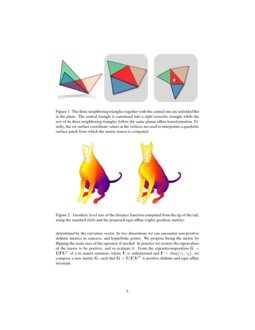 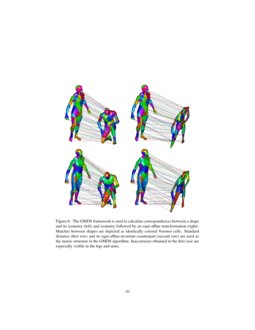 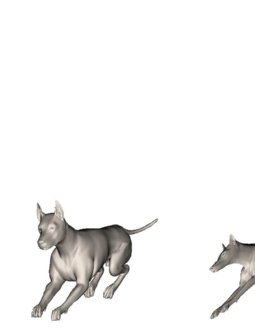 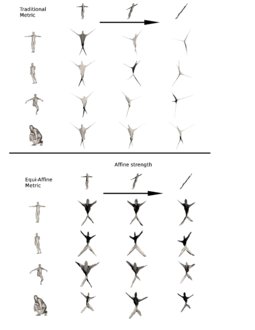 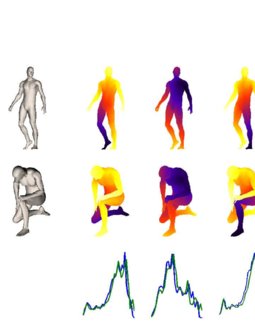 Modeling 3D shapes as Riemannian manifold is a ubiquitous approach in many shape analysis applications. In particular, in the recent decade, shape descriptors based on geodesic distances induced by a Riemannian metric have become popular. Notable examples of such methods are the canonical forms [7] and the Gromov-Hausdorff [9, 13, 2] and the Gromov-Wasserstein [12] frameworks, used in shape comparison and correspondence problems. Such methods consider shapes as metric spaces endowed with a geodesic distance metric, and pose the problem of shape similarity as finding the minimum-distortion correspondence between the metrics. The advantage of the geodesic distances is their invariance to inelastic deformations (bendings) that preserve the Riemannian metric, which makes them especially appealing for non-rigid shape analysis. A particular setting of finding shape self-similarity can be used for intrinsic symmetry detection in non-rigid shapes [17, 23, 11, 22].

The flexibility in the definition of the Riemannian metric allows extending the invariance of the aforementioned shape analysis algorithms by constructing a geodesic metric that is also invariant to global transformations of the embedding space. A particularly general and important class of such transformations are the affine transformations, which play an important role in many applications in the analysis of images [14] and 3D shapes [8]. Many frameworks have been suggested to cope with the action of the affine group in a global manner, trying to undo the affine transformation in large parts of a shape or a picture. While the theory of affine invariance is known for many years [4] and used for curves [18] and flows [19], no numerical constructions applicable to manifolds have been proposed.

In this paper, we construct an (equi-)affine-invariant Riemannian geometry for 3D shapes. By defining an affine-invariant Riemannian metric, we can in turn define affine-invariant geodesics, which result in a metric space with a stronger class of invariance. This new metric allows us to develop efficient computational tools that handle non-rigid deformations as well as equi-affine transformations. We demonstrate the usefulness of our construction in a range of shape analysis applications, such as shape processing, construction of shape descriptors, correspondence, and symmetry detection.

We model a shape (X,g) as a compact complete two-dimensional Riemannian manifold X with a metric tensor g. The metric g can be identified with an inner product ⟨⋅,⋅⟩x:TxX×TxX→R on the tangent plane TxX at point x. We further assume that X is embedded into R3 by means of a regular map x:U⊆R2→R3, so that the metric tensor can be expressed in coordinates as

where ui are the coordinates of U.

This, in turn, provides a way to measure length structures on the manifold. Given a curve C:[0,T]→X, its length can be expressed as

Minimal geodesics are the minimizers of ℓ(C), giving rise to the geodesic distances

where Γ(x,x′) is the set of all admissible paths between the points x and x′ on the surface X, where due to completeness assumption, the minimizer always exists.

Structures expressible solely in terms of the metric tensor g are called intrinsic. For example, the geodesic can be expressed in this way. The importance of intrinsic structures stems from the fact that they are invariant under isometric transformations (bendings) of the shape. In an isometrically bent shape, the geodesic distances are preserved – a property allowing to use such structures as invariant shape descriptors [7].

The geodesic distance dX(x0,x) can be obtained as the viscosity solution to the eikonal equation ∥∇d∥2=1 with boundary condition at the source point d(x0)=0. In the discrete setting, a family of algorithms for finding the viscosity solution of the discretized eikonal equation by simulated wavefront propagation is called fast marching methods [21, 10]. On a discrete shape represented as a triangular mesh with N vertices, the general structure of fast marching closely resembles that of the classical Dijkstra’s algorithm for shortest path computation in graphs, with the main difference in the update step. Unlike the graph case where shortest paths are restricted to pass through the graph edges, the continuous approximation allows paths passing anywhere in the mesh triangles. For that reason, the value of d(x0,x) has to be computed from the values of the distance map at two other vertices forming a triangle with x. Computation of the distance map from a single source point has the complexity of O(NlogN).

of the three-dimensional Euclidean space can be parametrized using twelve parameters: nine for the linear transformation

A, and additional three, b, for a translation, which we will omit in the following discussion. Volume-preserving transformations, known as special or equi-affine are restricted by detA=1. Such transformations involve only eleven parameters.

. By the chain rule,

where, for brevity, we denote xi=∂x∂ui and xij=∂2x∂ui∂uj. As volumes are preserved under the equi-affine group of transformations, we define the invariant arclength p through

where f(X) is a normalization factor for parameterization invariance. Plugging (3) into (6) yields

In order to evaluate f(X) such that the quadratic form (7) will also be parameterization invariant, we introduce an arbitrary parameteriation ¯u1 and ¯u2, for which ¯xi=∂x∂¯ui and ¯xij=∂2x∂¯ui∂¯uj. The relation between the two sets of parameterizations can be expressed using the chain rule

It can shown [4] using the Jacobian

; A simialr problem appeared in equi-affine curve evolution where the flow direction was determined by the curvature vector. In two dimentions we can encounter non-positive definite metrics in concave, and hyperbolic points. We propose fixing the metric by flipping the main axes of the operator, if needed. In practice we restrict the eigenvalues of the tensor to be positive, and re-avaluate it. From the eigendecomposition

^G=UΓUT of ^g in matrix notation, where U is orthonormal and Γ=diag{γ1,γ2}, we compose a new metric G, such that G=U|Γ|UT is positive definite and equi-affine invariant.

We model the surface X as a triangular mesh, and construct three coordinate functions x(u,v), y(u,v), and z(u,v) for each triangle. While this can be done practically in any representation, we use the fact that a triangle and its three adjacent neighbors, can be unfolded to the plane, and produce a parameter domain. The coordinates of this planar representation are used as the parametrization with respect to which the first fundamental form coefficients are computed at the barycenter of the simplex (Figure 1). Using the six base functions 1, u, v, uv, u2 and v2 we can construct a second order polynom for each coordinate function. This step is performed for every triangle of the mesh.

Calculating geodesic distances was well studied in past decades. Several fast and accurate numerical schemes [10, 20, 24] can be used off-the-shelf for this purpose. We use FMM technique, after locally rescaling each edge according to the equi-affine metric.

Each edge may appear in more than one triangle. We found that the average length is a good approximation, assuming the triangle inequality holds. In figures 2 and 3 we compare between geodesic distances induced by the standard and our affine-invariant metric.

The equi-affine metric can be used in many existing methods that process geodesic distances. In what follows, we show several examples for embedding the new metric in known applications such as voronoi tessellation, canonical forms, non-rigid matching and symmetry detection.

Voronoi tessellation is a partitioning of (X,g) into disjoint open sets called Voronoi cells. A set of k points (xi∈X)ki=1 on the surface define the Voronoi cells (Vi)ki=1 such that the i-th cell contains all points on X closer to xi than to any other xj in the sense of the metric g. Voronoi tessellations created with the equi-affine metric commute with equi-affine transformations as visualized in Figure 4.

Methods considering shapes as metric spaces with some intrinsic (e.g. geodesic) distance metric is an important class of approaches in shape analysis. Geodesic distances are particularly appealing due to their invariance to inelastic deformations that preserve the Riemannian metric.

Elad and Kimmel [7] proposed a shape recognition algorithm based on embedding the metric structure of a shape (X,dX) into a low-dimensional Euclidean spaces. Such a representation, referred to as canonical form, reduces the number of degress of freedom by tanslating all deformations into a much simple Euclidean isometry group.

Given a shape sampled at N points and an N×N matrix of pairwise geodesic distances, the computation of the canonical form consists of finding a configuration of N points z1,…,zN in Rm such that ∥zi−zj∥2≈dX(xi,xj). This problem is known as multidimensional scaling (MDS) and can be posed as a non-convex least-squares optimization problem of the form

Two non-rigid shapes X,Y can be considered similar if there exists an isometric correspondence C⊂X×Y between them, such that ∀x∈X there exists y∈Y with (x,y)∈C and vice-versa, and dX(x,x′)=dY(y,y′) for all (x,y),(x′,y′)∈C, where dX,dY are geodesic distance metrics on X,Y. In practice, no shapes are truly isometric, and such a correspondence rarely exists; however, one can attempt finding a correspondence minimizing the metric distortion,

The smallest achievable value of the distortion is called the Gromov-Hausdorff distance [5] between the metric spaces (X,dX) and (Y,dY),

and can be used as a criterion of shape similarity.

Bronstein et al. [2] showed how (20) can be efficiently approximated using an optimization algorithm in the spirit of multidimensional scaling (MDS), referred to as generalized MDS (GMDS). Since the input of this numeric framework are geodesic distances between mesh points, all is needed to obtain an equi-affine GMDS is one additional step where we substitute the geodesic distances with their equi-affine equivalents. Figure 6 shows the correspondences obtained between an equi-affine transformation of a shape using the standard and the equi-affine-invariant versions of the geodesic metric.

Raviv et al. [17] introduced the notion of intrinsic symmetries for non-rigid shapes as self-isometries of a shape with respect to a deformation-invariant (e.g. geodesic) distance metric. These self-isometries can be detected by trying to identify local minimizers of the metric distortion or other methods proposed in follow-up publications [16, 23, 11, 22].

Here, we adopt the framework of [17] for equi-affine intrinsic symmetry detection. Such symmetries play an important role in paleontological applications [8]. Equi-affine intrinsic symmetries are detected as local minima of the distortion, where the equi-affine geodesic distance metric is used. Figure 7 shows that using the traditional metric we face a decrease in accuracy of symmetry detection as the affine transformation becomes stronger (the accuracy is the average geodesic mismatch with relation to the ground-truth symmetry). Such a decrease does not occur using the equi-affine metric.

We introduced a numerical machinery for computing equi-affine-invariant geodesic distances. The proposed tools were applied to applications, like symmetry detection, finding correspondence, and canonization for efficient shape matching. We have extended the ability to analyze approximately isometric objects, like articulated objects, by treating affine deformations as well as non-rigid ones. As our analysis is based on local geometric structures, the affine group could in fact act locally and vary smoothly in space as long as it is encapsulated within our approximation framework. We intend to explore this direction and further enrich the set of transformations one can handle within the scope of metric geometry in the future.

This research was supported in part by The Israel Science Foundation (ISF) grant number 623/08, and by the USA Office of Naval Research (ONR) grant.