The existence of adversarial examples has led to considerable uncertainty regarding the trust one can justifiably put in predictions produced by automated systems. This uncertainty has, in turn, lead to considerable research effort in understanding adversarial robustness. In this work, we take first steps towards separating robustness analysis from the choice of robustness threshold and norm. We propose robustness curves as a more general view of the robustness behavior of a model and investigate under which circumstances they can qualitatively depend on the chosen norm. 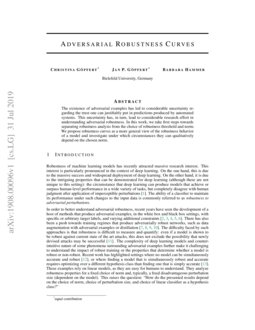 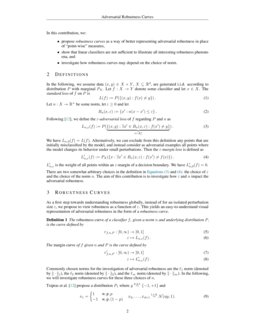 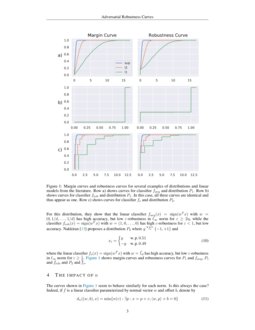 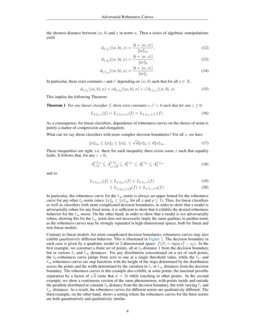 Adversarial examples and where to find them

The problem of adversarial examples has highlighted the need for a theor...
Zac Cranko, et al. ∙

On Model Robustness Against Adversarial Examples

Towards Assessment of Randomized Mechanisms for Certifying Adversarial Robustness

Robustness of machine learning models has recently attracted massive research interest. This interest is particularly pronounced in the context of deep learning. On the one hand, this is due to the massive success and widespread deployment of deep learning. On the other hand, it is due to the intriguing properties that can be demonstrated for deep learning (although these are not unique to this setting): the circumstance that deep learning can produce models that achieve or surpass human-level performance in a wide variety of tasks, but completely disagree with human judgment after application of imperceptible perturbations

. The ability of a classifier to maintain its performance under such changes to the input data is commonly referred to as

In order to better understand adversarial robustness, recent years have seen the development of a host of methods that produce adversarial examples, in the white box and black box settings, with specific or arbitrary target labels, and varying additional constraints [Goodfellow2014Explaining, Kurakin2016Adversarial, Kurakin2016Adversariala, Papernot2016Practical, Su2017One]. There has also been a push towards training regimes that produce adversarially robust networks, such as data augmentation with adversarial examples or distillation [Papernot2016Distillation, Gu2014Towards, Huang2015Learning, Bastani2016Measuring]. The difficulty faced by such approaches is that robustness is difficult to measure and quantify: even if a model is shown to be robust against current state of the art attacks, this does not exclude the possibility that newly devised attacks may be successful [Carlini2017Towards]. The complexity of deep learning models and counter-intuitive nature of some phenomena surrounding adversarial examples further make it challenging to understand the impact of robust training or the properties that determine whether a model is robust or non-robust. Recent work has highlighted settings where no model can be simultaneously accurate and robust [Tsipras2019Robustness], or where finding a model that is simultaneously robust and accurate requires optimizing over a different hypothesis class than finding one that is simply accurate [Nakkiran2019Adversarial]. These examples rely on linear models, as they are easy for humans to understand. They analyze robustness properties for a fixed choice of norm and, typically, a fixed disadvantageous perturbation size (dependent on the model). This raises the question: “How do the presented results depend on the choice of norm, choice of perturbation size, and choice of linear classifier as a hypothesis class?”

In this contribution, we:

In the following, we assume data (x,y)∈X×Y, X⊆Rd, are generated i.i.d. according to distribution P with marginal PX. Let f:X→Y denote some classifier and let x∈X. The standard loss of f on P is

Following [Tsipras2019Robustness], we define the ε-adversarial loss of f regarding P and n as

We have Ln,0(f)=L(f). Alternatively, we can exclude from this definition any points that are initially misclassified by the model, and instead consider as adversarial examples all points where the model changes its behavior under small perturbations. Then the ε-margin loss is defined as

L′n,ε is the weight of all points within an ε-margin of a decision boundary. We have L′n,0(f)=0.

There are two somewhat arbitrary choices in the definition in Equations 4 and 3: the choice of ε and the choice of the norm n. The aim of this contribution is to investigate how ε and n impact the adversarial robustness.

As a first step towards understanding robustness globally, instead of for an isolated perturbation size ε, we propose to view robustness as a function of ε. This yields an easy-to-understand visual representation of adversarial robustness in the form of a robustness curve.

The robustness curve of a classifier f, given a norm n and underlying distribution P, is the curve defined by

where the linear classifier fs(x)=sign(wTx) with w=→1d has high accuracy, but low ε-robustness in ℓ∞ norm for ε≥12. Figure 1 shows margin curves and robustness curves for P1 and favg, P1 and frob and P2 and fs.

4 The impact of n

The curves shown in Figure 1 seem to behave similarly for each norm. Is this always the case? Indeed, if f

is a linear classifier parameterized by normal vector

w and offset b, denote by

the shortest distance between (w,b) and x in norm n. Then a series of algebraic manipulations yield

In particular, there exist constants c and c′ depending on (w,b) such that for all x∈X,

This implies the following Theorem:

For any linear classifier f, there exist constants c,c′>0 such that for any ε≥0,

As a consequence, for linear classifiers, dependence of robustness curves on the choice of norm is purely a matter of compression and elongation.

What can we say about classifiers with more complex decision boundaries? For all x, we have

These inequalities are tight, i.e. there for each inequality there exists some x such that equality holds. It follows that, for any ε>0,

We have proposed robustness curves as a more general perspective on the robustness properties of a classifier and have discussed how these curves can or cannot be affected by the choice of norm. Robustness curves are a tool for a more principled investigation of adversarial robustness, while their dependence on a chosen norm underscores the necessity of basing robustness analyses on a clear problem definition that specifies what kind of perturbations a model should be robust to. We note that the use of ℓp norms in current research is frequently meant only as an approximation of a “human perception distance” [HiddenInPlainSight]. A human’s ability to detect a perturbation depends on the point the perturbation is applied to, meaning that human perception distance is not a homogeneous metric, and thus not induced by a norm. In this sense, where adversarial robustness is meant to describe how faithful the behavior of a model matches that of a human, the adversarial loss in Equation 3 can only be seen as a starting point of analysis. Nonetheless, since perturbations with small ℓp-norm are frequently imperceptible to humans, adversarial robustness regarding some ℓp

-norm is a reasonable lower bound for adversarial robustness in human perception distance. In future work, we would like to investigate how robustness curves can be estimated for deep networks and extend the definition to robustness against targeted attacks.