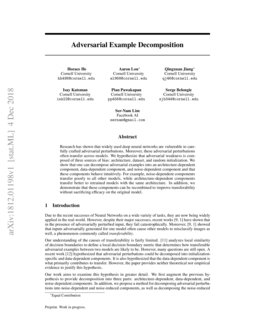 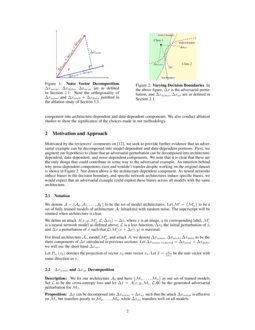 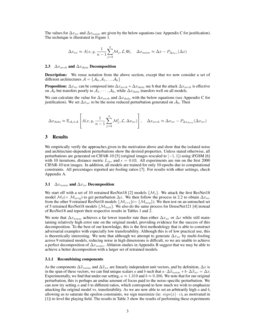 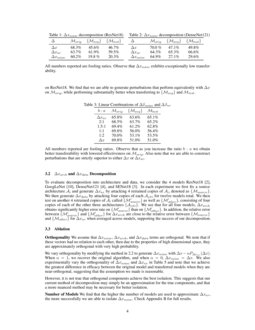 Due to the recent successes of Neural Networks on a wide variety of tasks, they are now being widely applied in the real-world. However, despite their major successes, recent works [9, 1] have shown that in the presence of adversarially perturbed input, they fail catastrophically. Moreover, [9, 1] showed that inputs adversarially generated for one model often cause other models to misclassify images as well, a phenomenon commonly called transferability.

Our understanding of the causes of transferability is fairly limited. [11] analyzes local similarity of decision boundaries to define a local decision boundary metric that determines how transferable adversarial examples between two models are likely to be. However, many questions are still open. A recent work [12] hypothesized that adversarial perturbations could be decomposed into initialization-specific and data-dependent components. It is also hypothesized that the data-dependent component is what primarily contributes to transfer. However, the paper provides neither theoretical nor empirical evidence to justify this hypothesis.

Our work aims to examine this hypothesis in greater detail. We first augment the previous hypothesis to provide decomposition into three parts: architecture-dependent, data-dependent, and noise-dependent components. In addition, we propose a method for decomposing adversarial perturbations into noise-dependent and noise-reduced components, as well as decomposing the noise-reduced component into architecture-dependent and data-dependent components. We also conduct ablation studies to show the significance of the choices made in our methodology.

We denote A={A0,A1,…,Ak} to be the set of model architectures. Let Mi={Miα} to be a set of fully trained models of architecture Ai initialized with random noise. The superscript will be omitted when architecture is clear.

We define an attack A(x,y,Mij,L,Δx0)=Δx, where x is an image, y its corresponding label, Mij is a neural network model as defined above, L

For fixed architecture Ai, model Mij, and attack A, we denote Δxnoise,Δxarch,Δxdata to be the three components of Δx introduced in previous sections. Let Δxnoise reduced=Δxarch+Δxdata; we will use the short hand Δxnr.

Let Px1(x2) denotes the projection of vector x2 onto vector x1. Let ˆx=x||x|| be the unit vector with same direction as x.

Description: We fix our architecture A0 and have {M1,…,Mn} as our set of trained models. Set L to be the cross-entropy loss and let Δx=A(x,y,M1,L,0) be the generated adversarial perturbation for M1.

Proposition: Δx can be decomposed into Δxnoise+Δxnr such that the attack Δxnoise is effective on M1 but transfers poorly to M2,…,Mn, while Δxnr transfers well on all models.

The values for Δxnr and Δxnoise are given by the below equations (see Appendix C for justification). The technique is illustrated in Figure 1.

Description: We reuse notation from the above section, except that we now consider a set of different architectures A={A0,A1,…Ak}

Proposition: Δxnr can be composed into Δxarch+Δxdata suc h that the attack Δxarch is effective on A0 but transfers poorly to A1,⋯,Ak, while Δxdata transfers well on all models.

We can calculate the value for Δxarch and Δxdata with the below equations (see Appendix C for justification). We set Δxnr to be the noise reduced perturbation generated on A0. Then

We empirically verify the approaches given in the motivation above and show that the isolated noise and architecture-dependent perturbations show the desired properties. Unless stated otherwise, all perturbations are generated on CIFAR-10 [5] (original images rescaled to [−1,1]) using iFGSM [6] with 10 iterations, distance metric L∞, and ϵ=0.03

. All experiments are run on the first 2000 CIFAR-10 test images. In addition, all models are trained for only 10 epochs due to computational constraints. All percentages reported are fooling ratios

[7]. For results with other settings, check Appendix A.

We note that Δxnoise achieves a far lower transfer rate than either Δxnr or Δx while still maintaining relatively high error rate on the original model, providing evidence for the success of this decomposition. To the best of our knowledge, this is the first methodology that is able to construct adversarial examples with especially low transferability. Although this is of low practical use, this is theoretically interesting. We note that although we attempt to generate Δxnr by multi-fooling across 9 retrained models, reducing noise in high dimensions is difficult, so we are unable to achieve a perfect decomposition of Δxnoise. Ablation studies in Appendix B suggest that we may be able to achieve a better decomposition with a larger set of retrained models.

As the components Δˆxnoise and Δˆxnr are linearly independent unit vectors, and by definition, Δx is in the span of these vectors, we can find unique scalars a and b such that a⋅Δˆxnoise+b⋅Δˆxnr=Δx. Experimentally, we find that under our setting, a≈1.319 and b≈0.386. We note that for our original perturbation, this is perhaps an undue amount of focus paid to the noise-specific perturbation. We can now try setting a and b to different ratios, which correspond to how much we wish to emphasize attacking the original model vs. transferability. As we are now able to set an arbitrarily high a and b, allowing us to saturate the epsilon constraints, we sign maximize (ie: sign(x)⋅ϵ), as motivated in [1]) to level the playing field. The results in Table 3 show the results of performing these experiments on ResNet18. We find that we are able to generate perturbations that perform equivalently with Δx on Morig, while performing substantially better when transferring to {Mavg} and Mtest.

To evaluate decomposition into architecture and data, we consider the 4 models ResNet18 [2], GoogLeNet [10], DenseNet121 [4], and SENet18 [3]. In each experiment we first fix a source architecture Ai and generate Δxnr by attacking 4 retrained copies of Ai, denoted as {Msource}. We then generate Δxdata by attacking four copies of each Aj≠i for twelve models total. We then test on another 4 retrained copies of Ai called {M′source} as well as {M′other}, consisting of four copies of each of the other three architectures {Aj≠i}. We see that for all four models, Δxarch obtains significantly higher error rate on {M′source} than on {M′other}. In addition, the relative error between {M′source} and {M′other} for Δxarch are close to the relative error between {Msource} and {Mother} for Δxnr when averaged across models, supporting the success of our decomposition.

terms are orthogonal. We note that if these vectors had no relation to each other, then due to the properties of high dimensional space, they are approximately orthogonal with very high probability.

We vary orthogonality by modifying the method in 2.2 to generate Δxnoise with Δx−αPΔxnr(Δx). When α=1, we recover the original algorithm, and when α=0, Δxnoise=Δx. We also experimentally vary the orthogonality of Δxnoise and Δxnr in Table 5 and note that we achieve the greatest difference in efficacy between the original model and transferred models when they are near-orthogonal, suggesting that the assumption we made is reasonable.

However, it is not true that orthogonal components achieve the best isolation. This suggests that our current method of decomposition may simply be an approximation for the true components, and that a more nuanced method may be necessary for better isolation.

Number of Models We find that the higher the number of models are used to approximate Δxnr, the more successfully we are able to isolate Δxnoise. Check Appendix B for full results.

We demonstrate that it is possible to decompose adversarial perturbations into noise-dependent and data-dependent components, a hypothesis reviewers thought was interesting but unsupported in [12]. We go further beyond by decomposing an adversarial perturbation into model related, data related, and noise related perturbations. A major contribution here is a new method of analyzing adversarial examples; this creates many potential future directions for research. One interesting direction would be extending these decompositions to universal perturbations [7, 8] and thus removing the dependence on individual data points. Another avenue to explore is analyzing various attacks and defenses and how they interplay with these various components.

To show that our decomposition is effective across a variety of attack settings, we perform the experiment of Section 3.1 with three different iFGSM settings corresponding to ϵ=0.01,0.03,0.06. Results are shown in Table 6.

B. Varying number of models/iterations

Justification of Equations in 3.1

Recall that the equations are given by

We assume that the expected value of our noise term Δxnoise is 0 over all random noise. This is motivated because the random noise i

at initialization is a Gaussian distribution centered at

0, and it is reasonable to assume that the model distribution and the noise distribution follows a similar pattern.

Letting Δxj=A(x,y,Mj,L,0) over all random initialization i, we claim that Ej[Δxj]=Δxarch+Δxdata. Since Δxarch and Δxdata are noise independent, which means that

where Δxjnoise is the noise component corresponding with the noise of model Mj. Therefore, it follows that

By the law of large numbers, it follows that

limn→∞1nn∑j=1Δxj=Δxnr. Therefore, we note that, for sufficiently large n, it follows that

We see that, since the cross entropy loss L is additive and the attack A that we examine are first order differentiation methods, we have

up to a scaling constant.

Justification of Equations in 3.2

Recall that the equations are, given Δnr generated on A0,

We claim that EA[Δxnr]=Δxdata where we take Δxnr over architecture A. To see this, we note that

and so again we can approximate it with limn→∞1nn∑i=1Δxinr=Δxdata where Δxinr is the Δxnr component generated for model Ai. For sufficiently large n, it follows that

and by our assumption this is roughly equivalent to

as desired. To prove the other claim, we use an analogous argument to the one above as we have shown that Δxarch and Δxdata are orthogonal and applying the same projection technique yields

up to a scaling constant.