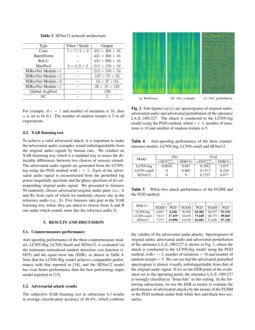 Automatic speaker verification (ASV) aim to confirm that a given utterance is pronounced by a specified speaker. It is now a mature technology for biometric authentication [27, 11, 7, 26, 25, 9, 19, 12]. Modern speaker verification systems harness the combination of several modules to tackle the problem of ASV. In [25]

[9] proposed an integrated model with end-to-end style which directly learns a mapping from a test utterance and a few reference utterances to a verification score, resulting in compact structure and sufficiently good performance. However, past research has shown that ASV systems are vulnerable to malicious attacks using spoofing and fake audios, such as synthetic, converted and replayed speech.

Anti-spoofing countermeasures for speaker verification systems arouse keen interests and several novel studies have been done [6, 30, 32, 5, 34, 13, 3, 17, 4, 24, 15]. The ASVspoof 2019 challenge [31], a community-led challenge, attracts more than 60 international industrial and academic teams to investigate spoofing countermeasures for ASV. Both the scenarios of logical access (LA) and physical access (PA) are taken into account. The LA scenario involves fake audios synthesized by modern text-to-speech synthesis (TTS) and voice conversion (VC) models. The PA scenario involves replayed audio recorded in reverberant environment under different acoustic and replay configurations. Several teams achieve excellent performance in detecting spoofing and reinforcing robustness of ASV systems under both LA and PA scenarios [31]. Yet according to [29, 2], machine learning models with impressive performance can be vulnerable to adversarial attacks [8]. Are the spoofing countermeasures for ASV in [31] robust enough to defend against adversarial examples?

and may even be visually or acoustically indistinguishable to human, but will lead the neural networks to incorrectly classify it as any target

t given a specific perturbation. Szegedy et al. [29] claim that well-trained neural network for image classification can succumb to adversarial attacks. The vulnerability of automatic speech recognition (ASR) neural network model under adversarial attacks is proved in [2], where an adversarial example can be transcribed as any phrase. However, to our best knowledge, the robustness of spoofing countermeasure systems for ASV under the adversarial attacks has not been studied yet. In this paper, we implement several high-performance spoofing countermeasure models in the ASVspoof 2019 challenge and assess the reliability of these models under the attack of adversarial examples.

This paper is the first one investigating the vulnerability of spoofing countermeasures for ASV under both white-box and black-box adversarial attacks. We compare performance of black-box attacks across spoofing countermeasure models with different network architectures and different number of parameters. We implement countermeasure models which achieve comparable or even better anti-spoofing performance than some high-performance models in the ASVspoof 2019 challenge and we successfully attack them under both white-box and black-box attack scenarios. All our codes will be made open-source

111Codes are available at https://github.com/ano-demo/AdvAttacksASVspoof.

The paper is organized as follows. Section 2 provides the detailed description of two ASV spoofing countermeasure models. In section 3, we introduce the procedure of adversarial audio generation with two adversarial attack methods, i.e., the FGSM and the PGD method. In section 4, we report the experimental setups. The experiment results and discussion are given in section 5. Finally, we conclude this paper in section 6.

Up to the submission time of this paper, only a few top-ranking systems in the ASVspoof 2019 challenge have accessible and complete model description. We choose two kinds of models, proposed by team T44 and team T45, to conduct adversarial attack experiments. According to the results of the ASVspoof 2019 challenge, the overall best performing single system for the LA scenario is proposed by team T45. The authors adopt an angular margin based softmax (A-softmax) [20] loss rather than traditional softmax with cross-entropy loss to train a Light CNN (LCNN) architecture [33]. The system proposed by team T44 is ranked 3-rd and 14-th places for the PA and LA scenarios, respectively. Team T44 adopts a Squeeze-Excitation extended ResNet (SENet) as one of models in their submitted system. We provide brief description of these two kinds of models in the next two subsections.

where N is the number of training samples, {xi}Ni=1 and their labels {yi}Ni=1 are training pairs, θyi,i is the angle between xi and the corresponding column yi of weights W in the fully connected classification layer, and m is an integer that controls the size of an angular margin between classes.

Squeeze-Excitation network (SENet) adaptively recalibrates channel-wise feature responses by explicitly modelling dependencies between channels, which has shown great merits in image classification task [10]. In this paper, we implemented a model with network architecture similar to that of SENet34 in [16]. The overall architecture of an SENet moduel is illustrated in Fig. 2.

where δ is small enough such that the reconstructed speech signal of the perturbed version ~x is perceptually indistinguishable from the original signal x by humans, but causes the network to make incorrect decision. Searching for a suitable δ can be formulated as solving the following optimization problem:

is the loss function,

yx is the label of x and Δ is a set of allowed perturbation that formalizes the manipulative power of the adversary. In this paper, Δ is a small l∞-norm ball, that is, .

To solve the optimization problem (4), in this paper, we adopt the fast gradient sign method (FGSM) [8] and the projected gradient descent (PGD) method [21].

The first adversarial attack method, shorted as the FGSM method, consists of taking a single step along the direction of the gradient, i.e.,

where the sign(⋅) function simply takes the sign of the gradient ∇xLoss(θ,x,yx). Therefore, given an utterance x, the adversarial spectral feature can be simply computed as ~x=x+ϵ⋅sign(∇xLoss(θ,x,yx)). While the FGSM benefits from being the simplest adversarial attack method, it is often relatively inefficient at solving the maximization problem (4).

Unlike the FGSM, which is a single-step method, the PGD method is an iterative method. Starting from the original input x0=x, the input is iteratively updated as follows:

where α is the step size, K is the number of iterations and the clip(⋅) function applies element-wise clipping such that ||xk−x||∞≤ϵ,ϵ≥0∈R. We take xK as the final perturbed spectral feature. Intuitively, the PGD method can be thought of as iteratively applying small-step FGSM, but forcing the perturbed input stay within the admissible set Δ at every step. The PGD method allows for more effective attacks but is naturally more computationally expensive than the FGSM.

The performance of PGD is still limited by the possibility of sticking at local optima of the loss function. To mitigate this problem, random restarts is incorporated into the PGD method [21]. The PGD method with random restarts will be executed multiple runs. The initial location of the adversarial example is randomly selected within the admissible perturbation set Δ and the PGD method will be executed a certain number of times in one run. The final adversarial example is the one resulting in maximum loss.

This paper uses the ASVspoof 2019 dataset, which encompasses partitions for the assessment of LA and PA scenarios. In this paper, we only utilize the LA partition, which are themselves partitioned into training, development and evaluation sets. We use raw log power magnitude spectrum computed from the signal as acoustic features. Following [18], FFT spectrum is extracted with the Blackman window having size of 1724 and step-size of 0.0081s. Only the first 600 frames for each utterance are used as input for all trained models. No additional preprocessing techniques such as voice activity detection (VAD), pre-emphasis or dereverberation are adopted.

3. The perturbed acoustic features are reconstructed into waveform to attack the well trained countermeasure model.

LCNN-big and LCNN-small model are trained using the A-Softmax loss function, while SENet12 is trained using the original softmax and cross-entropy loss. The constant m in Eq.(2) is set to 4. To mitigate the overfitting issue, a dropout rate of 0.75 is used when training LCNN models. We found that adding a relatively large L2 regularization is helpful to mitigate the overfitting issue. We set the weight decay rate at 0.001 when training all these three models. We use Adam optimizer with a constant learning rate of 0.001 to update the model parameters in all training cases, where β1=0.9 and β2=0.999.

During training stage, we applied early stopping according to the classification accuracy on the development set. During inference stage, we took the cosine similarity between the input and the weight vector in the last FC layer corresponding to the bonafide class as the score of the utterance.

We apply both white-box and balck-box adversarial attacks on the trained countermeasure models with the FGSM and the PGD method. We investigate adversarial attacks under various levels of manipulative power of the adversary on the audios. In both the FGSM and PGD attack settings, ϵ in Eq.(5) and Eq.(3.2) is chosen from the set of {0.1, 1, 5}. To make the level of manipulative power of the PGD attack consistent with the FGSM attack, we make the step-size α and ϵ in the PGD attack scenario satisfy the relationship of

For example, if ϵ=1 and number of iterations is 10, then α is set to be 0.1. The number of random restarts is 5 in all experiments.

Anti-spoofing performance of the three countermeasure models, LCNN-Big, LCNN-Small and SENet12, is evaluated via the minimum normalized tandem detection cost function (t-DCF) and the equal error rate (EER), as shown in Table 4. Note that the LCNN-Big model achieves comparable performance with that reported in [18], and the SENet12 model has even better performance than the best performing single model reported in [16].

The subjective XAB listening test in subsection 4.3 results in average classification accuracy of 48.4%, which confirms the validity of the adversarial audio attacks. Spectrograms of original audio, adversarial audio and adversarial perturbation of the utterance LA_E_1001227 is shown in Fig. 3, where the attack is conducted to the LCNN-big model using the PGD method, with ϵ=5, number of iterations = 10 and number of random restarts = 5. We can see that the adversarial perturbed spectrogram is almost visually indistinguishable from that of the original audio signal. If we set the EER point of the evaluation set as the operating point, the utterance LA_E_1001227 is wrongly classified as ”bona fide” in this setting. In the following subsections, we use the EER as metric to evaluate the performance of adversarial attacks by the means of the FGSM or the PGD method, under both white-box and black-box scenarios.