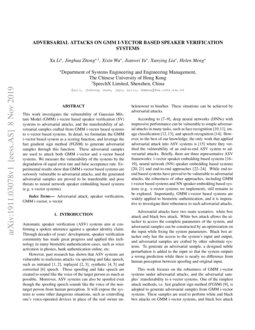 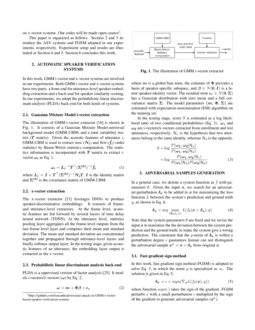 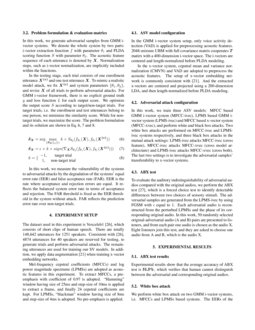 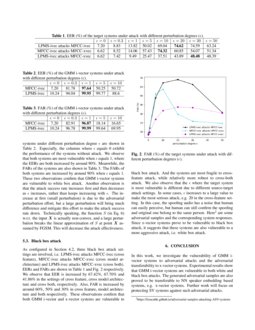 On the Detection of Adaptive Adversarial Attacks in Speaker Verification Systems

This study explores how robots and generative approaches can be used to ...
Jordan J. Bird, et al. ∙

The Attacker's Perspective on Automatic Speaker Verification: An Overview

Voting for the right answer: Adversarial defense for speaker verification

However, past research has shown that ASV systems are vulnerable to malicious attacks via spoofing and fake speech, such as imitated [26, 24], replayed [24, 25], synthetic [18, 19] and converted [11] speech. These spoofing and fake speech are created to sound like the voice of the target person as much as possible. Moreover, ASV systems can also be spoofed even though the spoofing speech sounds like the voice of the non-target person from human perception. It will expose the systems to some other dangerous situations, such as controlling one’s voice-operated devices in place of the real owner unbeknownst to him/her. These situations can be achieved by adversarial attacks.

, deep neural networks (DNNs) with impressive performance can be vulnerable to simple adversarial attacks in many tasks, such as face recognition

This work focuses on the robustness of GMM i-vector systems under adversarial attacks, and the adversarial samples’ transferability to x-vector systems. One of the simplest attack methods, i.e. fast gradient sign method (FGSM) [8]

This paper is organized as follows. Section 2 and 3 introduce the ASV systems and FGSM adopted in our experiments, respectively. Experiment setup and results are illustrated in Section 4 and 5. Section 6 concludes this work.

In this work, GMM i-vector and x-vector systems are involved in our experiments. Both GMM i-vector and x-vector systems have two parts: a front-end for utterance-level speaker embedding extraction and a back-end for speaker similarity scoring. In our experiments, we adopt the probabilistic linear discriminant analysis (PLDA) back-end for both kinds of systems.

The illustration of GMM i-vector extractor [4] is shown in Fig. 1. It consists of a Gaussian Mixture Model-universal background model (GMM-UBM) and a total variability matrix (T matrix). Given the acoustic features of utterance i, GMM-UBM is used to extract zero (Ni) and first (~fi) order statistics by Baum-Welch statistics computation. The statistics information is incorporated with T matrix to extract i-vector ωi as Eq. 1,

Σ(b) is the covariance matrix of GMM-UBM.

leverages DNNs to produce speaker-discriminative embeddings. It consists of frame- and utterance-level extractors. At the frame level, acoustic features are fed forward by several layers of time delay neural network (TDNN). At the utterance level, statistics pooling layer aggregates all the frame-level outputs from the last frame-level layer and computes their mean and standard deviation. The mean and standard deviation are concatenated together and propagated through utterance-level layers and finally softmax output layer. In the testing stage, given acoustic features of an utterance, the embedding layer output is extracted as the x-vector.

PLDA is a supervised version of factor analysis [6]. It models i-vectors/x-vectors (ω) by Eq. 2,

where m is a global bias term, the columns of Φ provides a basis of speaker-specific subspace, and β∈N(0,I) is a latent speaker-identity vector. The residual term ϵr∈N(0,Σ)

} are estimated with expectation-maximization (EM) algorithm on the training set.

In the testing stage, score S

is estimated as a log likelihood ratio of two conditional probabilities (Eq.

3). ω1 and ω2 are i-vectors/x-vectors extracted from enrollment and test utterances, respectively. Hs is the hypothesis that two utterances belong to the same identity, whereas Hd is the opposite.

In a general case, we denote a system function as f with parameters θ. Given the input x, we search for an adversarial perturbation δx to be added to x

for maximizing the loss function

L between the system’s prediction and ground truth y, as shown in Eq. 4,

Note that the system parameters θ are fixed and we revise the input x to maximize the the deviation between the system prediction and the ground truth, to make the system give a wrong prediction. The constraint that the p-norm of δx is within a perturbation degree ϵ guarantees human can not distinguish the adversarial sample x⋆=x+δx from original x.

In this work, fast gradient sign method (FGSM) is adopted to solve Eq. 5, in which the norm p is specialized as ∞. The solution is given in Eq. 5,

In this work, we generate adversarial samples from GMM i-vector systems. We denote the whole system by two parts: i-vector extraction function f with parameter θ1 and PLDA scoring function S with parameter θ2. The acoustic feature sequence of each utterance is denoted by X. Normalization steps, such as i-vector normalization, are implicitly included within the functions.

In the testing stage, each trial consists of one enrollment utterance X(e) and one test utterance X. To mimic a realistic model attack, we fix X(e) and system parameters {θ1,θ2}, and revise X of all trials to perform adversarial attacks. For GMM i-vector framework, there is no explicit ground truth y and loss function L for each output score. We optimize the output score S according to target/non-target trials. For target trials, i.e. the enrollment and test utterances belong to one person, we minimize the similarity score. While for non-target trials, we maximize the score. The problem formulation and its solution are shown in Eq. 6, 7 and 8.

The dataset used in this experiment is Voxceleb1 [15], which consists of short clips of human speech. There are totally 148,642 utterances for 1251 speakers. Consistent with [15], 4874 utterances for 40 speakers are reserved for testing, to generate trials and perform adversarial attacks. The remaining utterances are used for training our SV models. In addition, we apply data augmentation [20] when training x-vector embedding networks.

In the GMM i-vector system setup, only voice activity detection (VAD) is applied for preprocessing acoustic features. 2048-mixture UBM with full covariance matrix cooperates T matirx with a 400-dimension i-vector space. The i-vectors are centered and length-normalized before PLDA modeling.

In the x-vector system, cepstral mean and variance normalization (CMVN) and VAD are adopted to preprocess the acoustic features. The setup of x-vector embedding network is commonly consistent with

[20]. And the extracted x-vectors are centered and projected using a 200-dimension LDA, and then length-normalized before PLDA modeling.

To evaluate the auditory indistinguishability of adversarial audios compared with the original audios, we perform the ABX test [14], which is a forced choice test to identify detectable differences between two choices of sensory stimuli. The adversarial samples are generated from the LPMS-ivec by using FGSM with ϵ equal to 1. Each adversarial audio is reconstructed from the perturbed LPMSs and the phase of its corresponding original audio. In this work, 50 randomly selected original-adversarial audio (A and B) pairs are presented to listeners, and from each pair one audio is chosen as the audio X. Eight listeners join this test, and they are asked to choose one audio from A and B, which is the audio X.

Experimental results show that the average accuracy of ABX test is 51.5%, which verifies that human cannot distinguish between the adversarial and corresponding original audios.

We perform white box attack on two GMM i-vector systems, i.e. MFCCs and LPMSs based systems. The EERs of the systems under different perturbation degree ϵ are shown in Table 2. Especially, the columns where ϵ equals 0 exhibit the performance of the systems without attack. We observe that both systems are most vulnerable when ϵ equals 1, where the EERs are both increased by around 90%. Meanwhile, the FARs of the systems are also shown in Table 3. The FARs of both systems are increased by around 90% when ϵ equals 1. These two observations confirm that GMM i-vector systems are vulnerable to white box attack. Another observation is that the attack success rate increases first and then decreases as ϵ increases, rather than keeps increasing with ϵ. The increase at first (small perturbation) is due to the adversarial perturbation effort, but a large perturbation will bring much difference and mitigate this effort to make the attack success rate down. Technically speaking, the function S (in Eq. 6) w.r.t. the input X is actually non-convex, and a large perturbation breaks the linear approximation of S at point X assumed by FGSM. This will decrease the attack effectiveness.

As configured in Section 4.2, three black box attack settings are involved, i.e. LPMS-ivec attacks MFCC-ivec (cross feature), MFCC-ivec attacks MFCC-xvec (cross model architecture) and LPMS-ivec attacks MFCC-xvec (cross both). EERs and FARs are shown in Table 1 and Fig. 2 respectively. We observe that EER is increased by 67.42%, 67.70% and 41.86% in the settings of cross feature, cross model architecture and cross both, respectively. Also, FAR is increased by around 60%, 50% and 30% in cross feature, model architecture and both respectively. These observations confirm that both GMM i-vector and x-vector systems are vulnerable to black box attack. And the systems are most fragile to cross-feature attack, while relatively more robust to cross-both attack. We also observe that the ϵ where the target system is most vulnerable is different due to different source-target attack settings. In some cases, ϵ increases to a large value to make the most serious attack, e.g. 20 in the cross-feature setting. In this case, the spoofing audio has a noise that human can easily perceive, but human can still confirm the spoofing and original one belong to the same person. Here222https://lixucuhk.github.io/adversarial-samples-attacking-ASV-systems are some adversarial samples and the corresponding system responses. Since x-vector systems prove to be vulnerable to black box attack, it suggests that these systems are also vulnerable to a more aggressive attack, i.e. white box attack.