This article introduces publicly available datasets in scene text detection and recognition. The information is as of 2017. 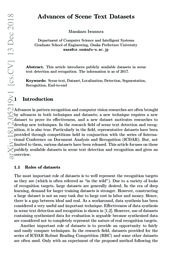 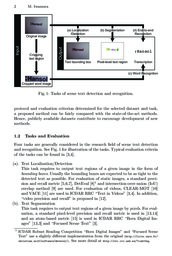 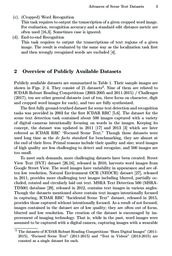 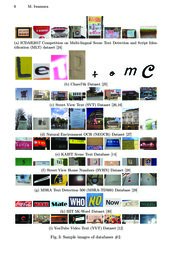 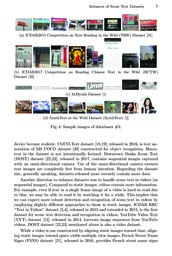 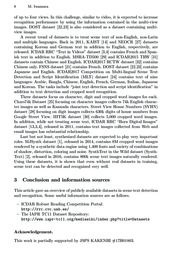 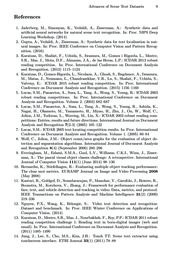 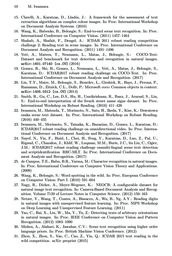 In this paper, we introduce the ShopSign dataset, which is a newly devel...
Chongsheng Zhang, et al. ∙

Estimating the pose of a camera with respect to a 3D reconstruction or s...
Marcela Mera-Trujillo, et al. ∙

TextContourNet: a Flexible and Effective Framework for Improving Scene Text Detection Architecture with a Multi-task Cascade

Advances in pattern recognition and computer vision researches are often brought by advances in both techniques and datasets; a new technique requires a new dataset to prove its effectiveness, and a new dataset motivates researches to develop new techniques. In the research field of scene text detection and recognition, it is also true. Particularly in the field, representative datasets have been provided through competitions held in conjunction with the series of International Conference on Document Analysis and Recognition (ICDAR). But, not limited to them, various datasets have been released. This article focuses on these publicly available datasets in scene text detection and recognition and gives an overview.

The most important role of datasets is to well represent the recognition targets as they are (which is often referred as “in the wild”). Due to a variety of looks of recognition targets, large datasets are generally desired. In the era of deep learning, demand for larger training datasets is stronger. However, constructing a large dataset is not an easy task due to large cost in labor and money. Hence, there is a gap between ideal and real. As a workaround, data synthesis has been considered a very useful and important technique. Effectiveness of data synthesis in scene text detection and recognition is shown in

[1, 2]. However, use of datasets containing synthesized data for evaluation is arguable because synthesized data are considered not to completely represent the nature of real recognition targets.

Another important role of datasets is to provide an opportunity to fairly and easily compare techniques. In the research field, datasets provided for the series of ICDAR Robust Reading Competition (RRC) and some other datasets are often used. Only with an experiment of the proposed method following the protocol and evaluation criterion determined for the selected dataset and task, a proposed method can be fairly compared with the state-of-the-art methods. Hence, publicly available datasets contribute to encourage development of new methods.

Four tasks are generally considered in the research field of scene text detection and recognition. See Fig. 1 for illustration of the tasks. Typical evaluation criteria of the tasks can be found in [3, 4].

The first fully ground-truthed dataset for scene text detection and recognition tasks was provided in 2003 for the first ICDAR RRC [5, 6]. The dataset for the scene text detection task contained about 500 images captured with a variety of digital cameras intentionally focusing on words in the images. Keeping its concept, the dataset was updated in 2011 [17] and 2013 [3] which are later referred as ICDAR RRC “Focused Scene Text.” Though these datasets were used long time as the de facto standard for benchmarking, they are almost at the end of their lives. Primal reasons include their quality and size; word images of high quality are less challenging to detect and recognize, and 500 images are too small.

To meet such demands, more challenging datasets have been created. Street View Text (SVT) dataset [26, 16], released in 2010, harvests word images from Google Street View. The word images have variability in appearance and are often low resolution. Natural Environment OCR (NEOCR) dataset [27], released in 2011, provides more challenging text images including blurred, partially occluded, rotated and circularly laid out text. MSRA Text Detection 500 (MSRA-TD500) database [29], released in 2012, contains text images in various angles. Though the datasets mentioned above contain text images intentionally focused in capturing, ICDAR RRC “Incidental Scene Text” dataset, released in 2015, provides those captured without intentionally focused. As a result of not focused, images contained in the dataset are of low quality; they are often out of focus, blurred and low resolution. The creation of the dataset is encouraged by improvement of imaging technology. That is, while in the past, word images were assumed to be captured with a digital camera, capturing images with a wearable device become realistic. COCO-Text dataset [18, 19], released in 2016, is text annotation of MS COCO dataset [20] constructed for object recognition. Hence, text in the dataset is not intentionally focused. Downtown Osaka Scene Text (DOST) dataset [22, 23], released in 2017, contains sequential images captured with an omni-directional camera. Use of the omni-directional camera ensures text images are completely free from human intention. Regarding the dataset size, generally speaking, datasets released more recently contain more data.

Another direction to enhance datasets was to handle scene text in videos (as sequential images). Compared to static images, videos contain more information. For example, even if text in a single frame image of a video is hard to read due to blur, we may be able to read it by watching it for a while. This implies that we can expect more robust detection and recognition of scene text in videos by employing slightly different approaches to those in static images. ICDAR RRC “Text in Videos” dataset [3, 4], released in 2013 and extended in 2015, is the first dataset for scene text detection and recognition in videos. YouTube Video Text (YVT) dataset [12], released in 2014, harvests image sequences from YouTube videos. DOST dataset [22, 23] mentioned above is also a video dataset.

While a video is one constructed by aligning static images toward time, aligning static images toward space yields multiple view images. French Street Name Signs (FSNS) dataset [21], released in 2016, provides French street name signs of up to four views. In this challenge, similar to video, it is expected to increase recognition performance by using the information contained in the multi-view images. DOST dataset [22, 23] is also considered as a dataset containing multi-view images.

Last but not least, synthesized datasets are expected to play very important roles. MJSynth dataset [1], released in 2014, contains 8M cropped word images rendered by a synthetic data engine using 1,400 fonts and variety of combinations of shadow, distortion, coloring and noise. SynthText in the Wild dataset (SynthText) [2], released in 2016, contains 800k scene text images naturally rendered. Using these datasets, it is shown that even without real datasets in training, scene text can be detected and recognized very well.

This article gave an overview of publicly available datasets in scene text detection and recognition. Some useful information sources are as follows.

This work is partially supported by JSPS KAKENHI #17H01803.