In this paper, we propose a new deep unfolding neural network based on the ADMM algorithm for analysis Compressed Sensing. The proposed network jointly learns a redundant analysis operator for sparsification and reconstructs the signal of interest. We compare our proposed network with a state-of-the-art unfolded ISTA decoder, that also learns an orthogonal sparsifier. Moreover, we consider not only image, but also speech datasets as test examples. Computational experiments demonstrate that our proposed network outperforms the state-of-the-art deep unfolding networks, consistently for both real-world image and speech datasets. 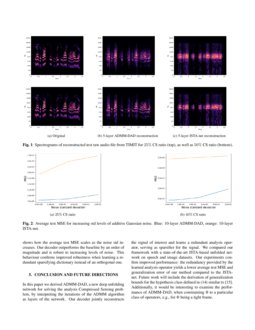 In this paper, we propose a new deep unfolding neural network – based on...
Vasiliki Kouni, et al. ∙

A Machine Learning Based Framework for the Smart Healthcare Monitoring

In this paper, we propose a novel framework for the smart healthcare sys...
Abrar Zahin, et al. ∙

In this paper, we analyze the asymptotic behavior of alternating directi...
Ryo Hayakawa, et al. ∙

Learning the Proximity Operator in Unfolded ADMM for Phase Retrieval

. Recently, approaches based on deep learning were introduced

[dagan], [deepcodec]. It seems promising to merge these two areas by considering what is called deep unfolding. The latter pertains to unfolding the iterations of well-known optimization algorithms into layers of a deep neural network (DNN), which reconstructs the signal of interest. Related work: Deep unfolding networks have gained much attention in the last few years [lista], [source], [bertocchi], because of some advantages they have compared to traditional DNNs: they are interpretable, integrate prior knowledge about the signal structure [deligiannis], and have a relatively small number of trainable parameters [adm]. Especially in the case of CS, many unfolding networks have proven to work particularly well. The authors in [amp], [ista-net], [admm-net], [holgernet] propose deep unfolding networks that learn a decoder, which aims at reconstructing x from y. Additionally, these networks jointly learn a dictionary that sparsely represents x, along with thresholds used by the original optimization algorithms. Motivation: Our work is inspired by the articles [ista-net] and [holgernet], which propose unfolded versions of the iterative soft thresholding algorithm (ISTA), with learnable parameters being the sparsifying (orthogonal) basis and/or the thresholds involved in ISTA. The authors then test their frameworks on synthetic data and/or real-world image datasets. In a similar spirit, we derive a decoder by interpreting the iterations of the alternating direction method of multipliers algorithm [admm] (ADMM) as a DNN and call it ADMM Deep Analysis Decoding (ADMM-DAD) network. We differentiate our approach by learning a redundant analysis operator as a sparsifier for x, i.e. we employ analysis sparsity in CS. The reason for choosing analysis sparsity over its synthesis counterpart is due to some advantages the former has. For example, analysis sparsity provides flexibility in modeling sparse signals, since it leverages the redundancy of the involved analysis operators. We choose to unfold ADMM into a DNN since most of the optimization-based CS algorithms cannot treat analysis sparsity, while ADMM solves the generalized LASSO problem [genlasso] which resembles analysis CS. Moreover, we test our decoder on speech datasets, not only on image ones. To the best of our knowledge, an unfolded CS decoder has not yet been used on speech datasets. We compare numerically our proposed network to the state-of-the-art learnable ISTA of [holgernet], on real-world image and speech data. In all datasets, our proposed neural architecture outperforms the baseline, in terms of both test and generalization error. Key results: Our novelty is twofold: a) we introduce a new ADMM-based deep unfolding network that solves the analysis CS problem, namely ADMM-DAD net, that jointly learns an analysis sparsifying operator b) we test ADMM-DAD net on image and speech datasets (while state-of-the-art deep unfolding networks are only tested on synthetic data and images so far). Experimental results demonstrate that ADMM-DAD outperforms the baseline ISTA-net on speech and images, indicating that the redundancy of the learned analysis operator leads to a smaller test MSE and generalization error as well.

Notation: For matrices A1,A2∈RN×N, we denote by [A1|A2]∈R2N×N their concatenation with respect to the first dimension, while we denote by [A1;A2]∈RN×2N their concatenation with respect to the second dimension. We denote by ON×N a square matrix filled with zeros. We write IN×N for the real N×Nidentity matrix. For x∈R,τ>0, the soft thresholding operator Sτ:R↦R is defined in closed form as Sτ(x)=sign(x)max(0,|x|−τ). For x∈Rn, the soft thresholding operator acts componentwise, i.e. (Sτ(x))i=Sτ(xi). For two functions f,g:Rn↦Rn, we write their composition as f∘g:Rn↦Rn.

As we mentioned in Section 1, the main idea of CS is to reconstruct a vector

x∈Rn from y=Ax+e∈Rm, m<n, where A is the so-called measurement matrix and e∈Rm, with ∥e∥2≤η, corresponds to noise. To do so, we assume there exists a redundant sparsifying transform Φ∈RN×n (N>n) called the analysis operator, such that Φx is (approximately) sparse. Using analysis sparsity in CS, we wish to recover x from y. A common approach is the analysis l1-minimization problem

A well-known algorithm that solves (1) is ADMM, which considers an equivalent generalized LASSO form of (1), i.e.,

with λ>0 being a scalar regularization parameter. ADMM introduces the dual variables z,u∈RN, so that (2) is equivalent to

Based on (11), we formulate ADMM as a neural network with L layers/iterations, defined as

The trainable parameters are the entries of Φ (or more generally, the parameters in a parameterization of Φ). We denote the concatenation of L such layers (all having the same Φ) as

The final output ^x is obtained after applying an affine map T motivated by (4) to the final layer L, so that

where [uL;zL]=vL. In order to clip the output in case its norm falls out of a reasonable range, we add an extra function σ:Rn→Rn defined as σ(x)=x if ∥x∥2≤Bout and σ(x)=Boutx/∥x∥2 otherwise, for some fixed constant Bout>0. We introduce the hypothesis class

consisting of all the functions that ADMM-DAD can implement. Then, given the aforementioned class and a set S={(yi,xi)}si=1 of s training samples, ADMM-DAD yields a function/decoder hS∈HL that aims at reconstructing x from y=Ax. In order to measure the difference between xi and ^xi=hS(yi), i=1,…,s, we choose the training mean squared error (train MSE)

as loss function. The test mean square error (test MSE) is defined as

where D={(~yi,~xi)}di=1 is a set of d test data, not used in the training phase. We examine the generalization ability of the network by considering the difference between the average train MSE and the average test MSE, i.e.,

Datasets and pre-processing: We train and test the proposed ADMM-DAD network on two speech datasets, i.e., SpeechCommands [speechcommands] (85511 training and 4890 test speech examples, sampled at 16kHz) and TIMIT [timit] (phonemes sampled at 16kHz; we take 70% of the dataset for training and the 30% for testing) and two image datasets, i.e. MNIST [mnist] (60000 training and 10000 test 28×28 image examples) and CIFAR10 [cifar] (50000 training and 10000 test 32×32 coloured image examples). For the CIFAR10 dataset, we transform the images into grayscale ones. We preprocess the raw speech data, before feeding them to both our ADMM-DAD and ISTA-net: we downsample each .wav file from 16000 to 8000 samples and segment each downsampled .wav into 10 segments.

layers. All networks are implemented in PyTorch

[pytorch]. For our experiments, we report the average test MSE and generalization error as defined in (16) and (17) respectively.

We compare our decoder to the baseline of the ISTA-net decoder, for 5 layers on all datasets with a fixed 25% CS ratio, and for 10 layers and both 40% and 50% CS ratios on the speech datasets and report the corresponding average test MSE and generalization error in Table 1. Both the training errors and the test errors are always lower for our ADMM-DAD net than for ISTA-net. Overall, the results from Table 1 indicate that the redundancy of the learned analysis operator improves the performance of ADMM-DAD net, especially when tested on the speech datasets. Furthermore, we extract the spectrograms of an example test raw audio file of TIMIT reconstructed by either of the 5-layer decoders. We use 1024 FFT points. The resulting spectrograms for 25% and 50% CS ratio are illustrated in Fig. 1. Both figures indicate that our decoder outperforms the baseline, since the former distinguishes many more frequencies than the latter. Naturally, the quality of the reconstructed raw audio file by both decoders increases, as the CS ratio also increases from 25% to 50%. However, ADMM-DAD reconstructs –even for the 25% CS ratio– a clearer version of the signal compared to ISTA-net; the latter recovers a significant part of noise, even for the 50% CS ratio. Finally, we examine the robustness of both 10-layer decoders. We consider noisy measurements in the test set of TIMIT, taken at 25% and 40% CS ratio, with varying standard deviation (std) of the additive Gaussian noise. Fig. 2 shows how the average test MSE scales as the noise std increases. Our decoder outperforms the baseline by an order of magnitude and is robust to increasing levels of noise. This behaviour confirms improved robustness when learning a redundant sparsifying dictionary instead of an orthogonal one.

In this paper we derived ADMM-DAD, a new deep unfolding network for solving the analysis Compressed Sensing problem, by interpreting the iterations of the ADMM algorithm as layers of the network. Our decoder jointly reconstructs the signal of interest and learns a redundant analysis operator, serving as sparsifier for the signal. We compared our framework with a state-of-the-art ISTA-based unfolded network on speech and image datasets. Our experiments confirm improved performance: the redundancy provided by the learned analysis operator yields a lower average test MSE and generalization error of our method compared to the ISTA-net. Future work will include the derivation of generalization bounds for the hypothesis class defined in (14) similar to [holgernet]. Additionally, it would be interesting to examine the performance of ADMM-DAD, when constraining Φ to a particular class of operators, e.g., for Φ being a tight frame.