Session-based recommendation has received growing attention recently due to the increasing privacy concern. Despite the recent success of neural session-based recommenders, they are typically developed in an offline manner using a static dataset. However, recommendation requires continual adaptation to take into account new and obsolete items and users, and requires "continual learning" in real-life applications. In this case, the recommender is updated continually and periodically with new data that arrives in each update cycle, and the updated model needs to provide recommendations for user activities before the next model update. A major challenge for continual learning with neural models is catastrophic forgetting, in which a continually trained model forgets user preference patterns it has learned before. To deal with this challenge, we propose a method called Adaptively Distilled Exemplar Replay (ADER) by periodically replaying previous training samples (i.e., exemplars) to the current model with an adaptive distillation loss. Experiments are conducted based on the state-of-the-art SASRec model using two widely used datasets to benchmark ADER with several well-known continual learning techniques. We empirically demonstrate that ADER consistently outperforms other baselines, and it even outperforms the method using all historical data at every update cycle. This result reveals that ADER is a promising solution to mitigate the catastrophic forgetting issue towards building more realistic and scalable session-based recommenders. 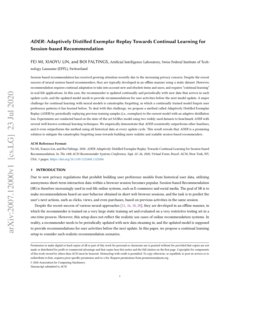 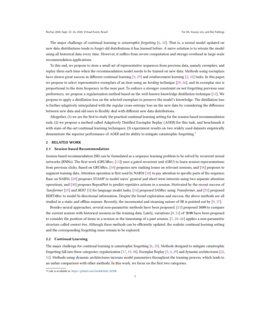 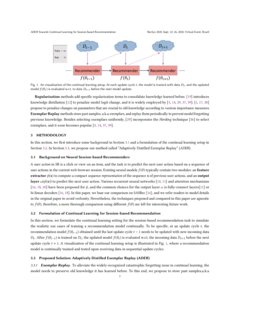 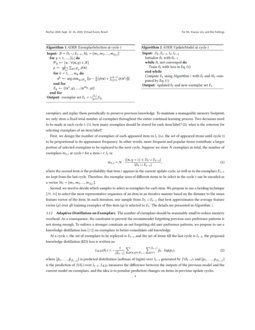 Due to new privacy regulations that prohibit building user preference models from historical user data, utilizing anonymous short-term interaction data within a browser session becomes popular. Session-based Recommendation (SR) is therefore increasingly used in real-life online systems, such as E-commerce and social media. The goal of SR is to make recommendations based on user behavior obtained in short web browser sessions, and the task is to predict the user’s next actions, such as clicks, views, and even purchases, based on previous activities in the same session.

Despite the recent success of various neural approaches (hidasi2015session; li2017neural; liu2018stamp; kang2018self), they are developed in an offline manner, in which the recommender is trained on a very large static training set and evaluated on a very restrictive testing set in a one-time process. However, this setup does not reflect the realistic use cases of online recommendation systems. In reality, a recommender needs to be periodically updated with new data steaming in, and the updated model is supposed to provide recommendations for user activities before the next update. In this paper, we propose a continual learning setup to consider such realistic recommendation scenarios.

The major challenge of continual learning is catastrophic forgetting (mccloskey1989catastrophic; french1999catastrophic). That is, a neural model updated on new data distributions tends to forget old distributions it has learned before. A naive solution is to retrain the model using all historical data every time. However, it suffers from severe computation and storage overhead in large-scale recommendation applications.

To this end, we propose to store a small set of representative sequences from previous data, namely exemplars, and replay them each time when the recommendation model needs to be trained on new data. Methods using exemplars have shown great success in different continual learning (rebuffi2017icarl; castro2018end)

(schaul2015prioritized; andrychowicz2017hindsight) tasks. In this paper, we propose to select representative exemplars of an item using an herding technique (welling2009herding; rebuffi2017icarl), and its exemplar size is proportional to the item frequency in the near past. To enforce a stronger constraint on not forgetting previous user preferences, we propose a regularization method based on the well-known knowledge distillation technique (hinton2015distilling)

. We propose to apply a distillation loss on the selected exemplars to preserve the model’s knowledge. The distillation loss is further adaptively interpolated with the regular cross-entropy loss on the new data by considering the difference between new data and old ones to flexibly deal with different new data distributions.

Altogether, (1) we are the first to study the practical continual learning setting for the session-based recommendation task; (2) we propose a method called Adaptively Distilled Exemplar Replay (ADER) for this task, and benchmark it with state-of-the-art continual learning techniques; (3) experiment results on two widely used datasets empirically demonstrate the superior performance of ADER and its ability to mitigate catastrophic forgetting.111Code is available at: https://github.com/DoubleMuL/ADER

Session-based recommendation (SR) can be formulated as a sequence learning problem to be solved by recurrent neural networks (RNNs). The first work (GRU4Rec,

) uses a gated recurrent unit (GRU) to learn session representations from previous clicks. Based on GRU4Rec,

(hidasi2018recurrent) proposes new ranking losses on relevant sessions, and (tan2016improved) proposes to augment training data. Attention operation is first used by NARM (li2017neural) to pay attention to specific parts of the sequence. Base on NARM, (liu2018stamp) proposes STAMP to model users’ general and short-term interests using two separate attention operations, and (ren2018repeatnet) proposes RepeatNet to predict repetitive actions in a session. Motivated by the recent success of Tansformer (vaswani2017attention) and BERT (devlin2018bert) for language model tasks, (kang2018self) proposed SASRec using Transformer, and (sun2019bert4rec) proposed BERT4Rec to model bi-directional information. Despite the broad exploration and success, the above methods are all studied in a static and offline manner. Recently, the incremental and steaming nature of SR is pointed out by (guo2019streaming; mi2020memory).

Besides neural approaches, several non-parametric methods have been proposed. (jannach2017recurrent) proposed SKNN to compare the current session with historical sessions in the training data. Lately, variations (ludewig2018evaluation; garg2019sequence) of SKNN have been proposed to consider the position of items in a session or the timestamp of a past session. (garcin2013personalized; mi2016adaptive; mi2017adaptive; mi2018context) applies a non-parametric structure called context tree. Although these methods can be efficiently updated, the realistic continual learning setting and the corresponding forgetting issue remain to be explored.

to penalize model logit change, and it is widely employed by

In this section, we first introduce some background in Section 3.1 and a formulation of the continual learning setup in Section 3.2. In Section 3.3, we propose our method called “Adaptively Distilled Exemplar Replay” (ADER).

A user action in SR is a click or view on an item, and the task is to predict the next user action based on a sequence of user actions in the current web-browser session. Existing neural models f(θ) typically contain two modules: an feature extractor ϕ(x) to compute a compact sequence representation of the sequence x of previous user actions, and an output layer ω(ϕ(x)) to predict the next user action. Various recurrent neural networks (hidasi2015session; hidasi2018recurrent) and attention mechanisms (li2017neural; liu2018stamp; kang2018self) have been proposed for ϕ, and the common choices for the output layer ω is fully-connect layers(hidasi2015session) or bi-linear decoders (li2017neural; kang2018self). In this paper, we base our comparison on SASRec (kang2018self), and we refer readers to model details in the original paper to avoid verbosity. Nevertheless, the techniques proposed and compared in this paper are agnostic to f(θ), therefore, a more thorough comparison using different f(θ) are left for interesting future work.

To alleviate the widely-recognized catastrophic forgetting issue in continual learning, the model needs to preserve old knowledge it has learned before. To this end, we propose to store past samples,a.k.a exemplars, and replay them periodically to preserve previous knowledge. To maintain a manageable memory footprint, we only store a fixed total number of exemplars throughout the entire continual learning process. Two decisions need to be made at each cycle t: (1). how many exemplars should be stored for each item/label? (2). what is the criterion for selecting exemplars of an item/label?

where the second term is the probability that item

i appears in the current update cycle, as well as in the exemplars Et−1 we kept from the last cycle. Therefore, the exemplar sizes of different items to be select in the cycle t

can be encoded as a vector

Second, we need to decide which samples to select as exemplars for each item. We propose to use a herding technique (welling2009herding; rebuffi2017icarl) to select the most representative sequences of an item in an iterative manner based on the distance to the mean feature vector of the item. In each iteration, one sample from Dt∪Et−1 that best approximates the average feature vector (μ) over all training examples of this item (y) is selected to Et. The details are presented in Algorithm 1.

The number of exemplars should be reasonably small to reduce memory overhead. As a consequence, the constraint to prevent the recommender forgetting previous user preference patterns is not strong enough. To enforce a stronger constrain on not forgetting old user preference patterns, we propose to use a knowledge distillation loss (hinton2015distilling) on exemplars to better consolidate old knowledge

At a cycle t, the set of exemplars to be replayed is Et−1 and the set of items till the last cycle is It−1, the proposed knowledge distillation (KD) loss is written as:

where [^p1,…,^p|It−1|] is predicted distribution (softmax of logits) over It−1 generated by f(θt−1), and [p1,…,p|It−1|] is the prediction of f(θt) over It−1. LKD measures the difference between the outputs of the previous model and the current model on exemplars, and the idea is to penalize prediction changes on items in previous update cycles.

LKD defined above is interpolated with a regular cross-entropy (CE) loss computed w.r.t. Dt defined below:

In practice, the size of incoming data and the number of new items varies in different cycles, therefore, the degree of need to preserve old knowledge varies. To this end, we propose an adaptive weight λt to combine LKD with LCE:

Two widely used dataset are adopted: (1). DIGINETICA: This dataset contains click-streams data on a e-commerce site over a 5 months, and it is used for CIKM Cup 2016 (http://cikm2016.cs.iupui.edu/cikm-cup). (2). YOOCHOOSE: It is another dataset used by RecSys Challenge 2015 (http://2015.recsyschallenge.com/challenge.html) for predicting click-streams on another e-commerce site over 6 months.

As in (hidasi2015session; li2017neural; liu2018stamp; kang2018self), we remove sessions of length 1 and items that appear less than 5 times. To simulate the continual learning scenario, we split the model update cycle of DIGINETICA by weeks and YOOCHOOSE by days as its volume is much larger. Different time spans also resemble model update cycles at different granulates. In total, 16 update cycles are used to continually train the recommender on both datasets. 10% of the training data of each update cycle is randomly selected as a validation set. Statistics of split datasets are summarized in Table 1. We can see that YOOCHOOSE is less dynamic, indicated by the tiny fraction of actions on new items, that is, old items heavily reappear.

using 150 hidden units and 2 stacked self-attention blocks. During continual training, we set the batch size to be 256 on DIGINETICA and 512 on YOOCHOOSE. We use Adam optimizer with a learning rate of 5e-4. A total of 100 epochs are trained, and early stop is applied if validation performance (Recall@20) does not improve for 5 consecutive epochs. Other hyper-parameters are tuned to maximize Recall@20. The dropout rate of

Results averaged over 16 update cycles are presented in Table 2, and several interesting observations can be noted:

Detailed disentangled performance at each update cycle is plotted in Figure 2. We can see that the advantage of ADER is significant on the more dynamic DIGINETICA dataset. On the less dynamic YOOCHOOSE dataset, the gain of ADER mainly comes from the more dynamic starting cycles with relatively more actions on new items. At later stable cycles with few new items, different methods show comparable performance, including the vanilla Finetune.

In following experiments, we conducted an in-depth analysis of the results on the more dynamic DIGINETICA dataset.

In this paper, we studied the practical and realistic continual learning setting for session-based recommendation tasks. To prevent the recommender forgetting user preferences learned before, we propose ADER by replaying carefully chosen exemplars from previous cycles and an adaptive distillation loss. Experiment results on two widely used datasets empirically demonstrate the promising performance of ADER. Our work may inspire researchers working from similar continual learning perspective for building more robust and scalable recommenders.