This paper presents a novel backtracking strategy for additive Schwarz methods for general convex optimization problems as an acceleration scheme. The proposed backtracking strategy is independent of local solvers, so that it can be applied to any algorithms that can be represented in an abstract framework of additive Schwarz methods. Allowing for adaptive increasing and decreasing of the step size along the iterations, the convergence rate of an algorithm is greatly improved. Improved convergence rate of the algorithm is proven rigorously. In addition, combining the proposed backtracking strategy with a momentum acceleration technique, we propose a further accelerated additive Schwarz method. Numerical results for various convex optimization problems that support our theory are presented. 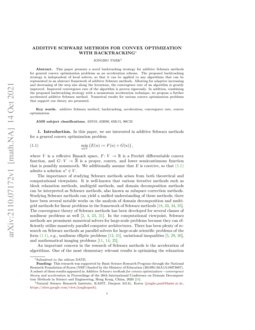 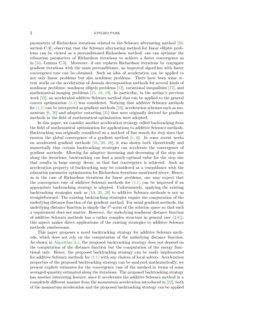 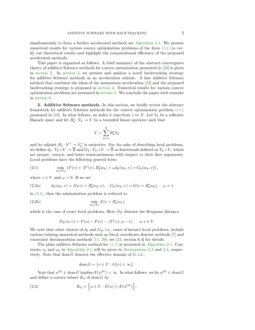 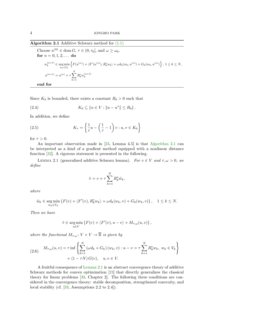 Based on an observation that additive Schwarz methods for general convex...
Jongho Park, et al. ∙

A lot of effort has been invested into characterizing the convergence ra...
Konstantinos I. Tsianos, et al. ∙

In this paper, we are interested in additive Schwarz methods for a general convex optimization problem

where V is a reflexive Banach space, F:V→R is a Frechét differentiable convex function, and G:V→¯¯¯¯R is a proper, convex, and lower semicontinuous function that is possibly nonsmooth. We additionally assume that E is coercive, so that Eq. 1 admits a solution u∗∈V.

The importance of studying Schwarz methods arises from both theoretical and computational viewpoints. It is well-known that various iterative methods such as block relaxation methods, multigrid methods, and domain decomposition methods can be interpreted as Schwarz methods, also known as subspace correction methods. Studying Schwarz methods can yield a unified understanding of these methods; there have been several notable works on the analysis of domain decomposition and multigrid methods for linear problems in the framework of Schwarz methods [18, 33, 34, 35]. The convergence theory of Schwarz methods has been developed for several classes of nonlinear problems as well [2, 4, 23, 31]. In the computational viewpoint, Schwarz methods are prominent numerical solvers for large-scale problems because they can efficiently utilize massively parallel computer architectures. There has been plenty of research on Schwarz methods as parallel solvers for large-scale scientific problems of the form Eq. 1, e.g., nonlinear elliptic problems [12, 31], variational inequalities [5, 29, 30], and mathematical imaging problems [11, 14, 25].

An important concern in the research of Schwarz methods is the acceleration of algorithms. One of the most elementary relevant results is optimizing the relaxation parameters of Richardson iterations related to the Schwarz alternating method [33, section C.3]; observing that the Schwarz alternating method for linear elliptic problems can be viewed as a preconditioned Richardson method, one can optimize the relaxation parameters of Richardson iterations to achieve a faster convergence as in [33, Lemma C.5]. Moreover, if one replaces Richardson iterations by conjugate gradient iterations with the same preconditioner, an improved algorithm with faster convergence rate can be obtained. Such an idea of acceleration can be applied to not only linear problems but also nonlinear problems. There have been some recent works on the acceleration of domain decomposition methods for several kinds of nonlinear problems: nonlinear elliptic problems [12], variational inequalities [17], and mathematical imaging problems [15, 16, 19]. In particular, in the author’s previous work [22], an accelerated additive Schwarz method that can be applied to the general convex optimization Eq. 1 was considered. Noticing that additive Schwarz methods for Eq. 1 can be interpreted as gradient methods [23], acceleration schemes such as momentum [6, 20] and adaptive restarting [21]

that were originally derived for gradient methods in the field of mathematical optimization were adopted.

with any choices of local solvers. Acceleration properties of the proposed backtracking strategy can be analyzed mathematically; we present explicit estimates for the convergence rate of the method in terms of some averaged quantity estimated along the iterations. The proposed backtracking strategy has another interesting feature; since it accelerates the additive Schwarz method in a completely different manner from the momentum acceleration introduced in

In this section, we briefly review the abstract framework for additive Schwarz methods for the convex optimization problem Eq. 1 presented in [23]. In what follows, an index k runs from 1 to N. Let Vk be a reflexive Banach space and let R∗k:Vk→V be a bounded linear operator such that

and its adjoint Rk:V∗→V∗k is surjective. For the sake of describing local problems, we define dk:Vk×V→¯¯¯¯R and Gk:Vk×V→¯¯¯¯R as functionals defined on Vk×V, which are proper, convex, and lower semicontinuous with respect to their first arguments. Local problems have the following general form:

which is the case of exact local problems. Here DF denotes the Bregman distance

We note that other choices of dk and Gk, i.e., cases of inexact local problems, include various existing numerical methods such as block coordinate descent methods [7] and constraint decomposition methods [11, 29]; see [23, section 6.4] for details.

The plain additive Schwarz method for Eq. 1 is presented in Algorithm 1. Constants τ0 and ω0 in Algorithm 1 will be given in Lemmas 1 and 1, respectively. Note that domG denotes the effective domain of G, i.e.,

Since K0 is bounded, there exists a constant R0>0 such that

In addition, we define

An important observation made in [23, Lemma 4.5] is that Algorithm 1 can be interpreted as a kind of a gradient method equipped with a nonlinear distance function [32]. A rigorous statement is presented in the following.

where the functional Mτ,ω:V×V→¯¯¯¯R is given by

A fruitful consequence of Lemma 1 is an abstract convergence theory of additive Schwarz methods for convex optimization [23] that directly generalizes the classical theory for linear problems [33, Chapter 2]. The following three conditions are considered in the convergence theory: stable decomposition, strengthened convexity, and local stability (cf. [33, Assumptions 2.2 to 2.4]).

[stable decomposition] There exists a constant q>1 such that for any bounded and convex subset K of V, the following holds: for any u,v∈K∩domG, there exists wk∈Vk, 1≤k≤N, with u−v=∑Nk=1R∗kwk, such that

where C0,K is a positive constant depending on K.

[local stability] There exists a constant ω0>0 which satisfies the following: for any v∈domG, and wk∈Vk, 1≤k≤N, we have

Lemma 1 is compatible with various stable decomposition conditions presented in existing works, e.g., [3, 31, 33]. Lemma 1 trivially holds with τ0=1/N due to the convexity of E. However, a better value for τ0 independent of N can be found by the usual coloring technique; see [23, section 5.1] for details. In the same spirit as [33], Lemma 1 gives a one-sided measure of approximation properties of the local solvers. It was shown in [23, section 4.1] that the above assumptions reduce to [33, Assumptions 2.2 to 2.4] if they are applied to linear elliptic problems. Under the above three assumptions, we have the following convergence theorem for Algorithm 1 [23, Theorem 4.7].

where κτ,ω is the additive Schwarz condition number defined by

Meanwhile, the Łojasiewicz inequality holds in many applications [8, 36]; it says that the energy functional E of Eq. 1 is sharp around the minimizer u∗. We summarize this property in Proposition 1; it is well-known that improved convergence results for first-order optimization methods can be obtained under this assumption [9, 27].

[sharpness] There exists a constant p>1 such that for any bounded and convex subset K of V satisfying u∗∈K, we have

We present an improved convergence result for Algorithm 1 compared to Proposition 1 under the additional sharpness assumption on E [23, Theorem 4.8].

Propositions 2 and 1 are direct consequences of Lemma 1 in the sense that they can be easily deduced by invoking theories of gradient methods for convex optimization [23, section 2].

In gradient methods, backtracking strategies are usually adopted to find a suitable step size that ensures sufficient decrease of the energy. For problems of the form Eq. 1, backtracking strategies are necessary in particular to obtain the global convergence to a solution when the Lipschitz constant of F′ is not known [1, 6]. Considering Algorithm 1, a sufficient decrease condition of the energy is satisfied whenever τ∈(0,τ0] and ω≥ω0 (see [23, Lemma 4.6]), and the values of τ0 and ω0 in Lemmas 1 and 1, respectively, can be obtained explicitly in many cases. Indeed, an estimate for τ0 independent of N can be obtained by the coloring technique [23, section 5.1], and we have ω0=1 when we use the exact local solvers. Therefore, backtracking strategies are not essential for the purpose of ensuring the global convergence of additive Schwarz methods. In this perspective, to the best of our knowledge, there have been no considerations on applying backtracking strategies in the existing works on additive Schwarz methods for convex optimization.

The parameter ρ∈(0,1) in Algorithm 2 plays a role of an adjustment parameter for the grid search. As ρ closer to 0, the grid for line search of τ becomes sparser. On the contrary, the greater ρ, the greater τ(n+1) is found with the more computational cost for the backtracking process. The condition τ(0)=τ0 is not critical in the implementation of Algorithm 2 since τ0 can be obtained by the coloring technique.

Different from the existing approaches [10, 20, 28], the backtracking scheme in Algorithm 2 does not depend on the distance function Mτ,ω(⋅,⋅) but the energy functional E only. Hence, the stop criterion

Next, we analyze the convergence behavior of Algorithm 2. First, we prove that the backtracking process in Algorithm 2 ends in finite steps and that the step size τ(n) never becomes smaller than a particular value.

Suppose that Lemma 1 holds. The backtracking process in Algorithm 2 terminates in finite steps and we have

Since Lemma 1 implies that the stop criterion Eq. 9 is satisfied whenever τ∈(0,τ0], the backtracking process ends if τ becomes smaller than or equal to τ0. Now, take any n≥1. If τ(n) were less than τ0, say τ(n)=ρjτ0 for some j≥1, then τ in the previous inner iteration is ρj−1τ0≤τ0, so that the backtracking process should have stopped there, which is a contradiction. Therefore, we have τ(n)≥τ0. ■

Lemma 2 says that Lemma 1 is a sufficient condition to ensure that τ(n+1) is successfully determined by the backtracking process in each iteration of Algorithm 2. It is important to notice that τ(n) is always greater than or equal to τ0; the step sizes of Algorithm 2 are larger than or equal to that of Algorithm 1. Meanwhile, similar to the plain additive Schwarz method, Algorithm 2 generates the sequence {u(n)} whose energy is monotonically decreasing. Hence, {u(n)} is contained in K0 defined in Eq. 4.

Suppose that Lemma 1 holds. In Algorithm 2, the sequence {E(u(n))} is decreasing. □

Take any n≥0. By the stop criterion Eq. 9 for backtracking and the minimization property of w(n+1)k, we get

Note that [23, Lemma 4.6] played a key role in the convergence analysis of Algorithm 1 presented in [23]. Relevant results for Algorithm 2 can be obtained in a similar manner.

Suppose that Lemmas 1 and 1 hold. In Algorithm 2, we have

Take any wk∈Vk such that

Taking the infimum over all wk satisfying Eq. 10 yields the desired result. ■

Suppose that Lemma 1 holds. Let τ,ω>0. For any bounded and convex subset K of V, we have

In addition, the right-hand side of Eq. 11 is decreasing with respect to τ. More precisely, if τ1≥τ2>0, then we have

Equation 11 is identical to the second half of [23, Lemma 4.6]. Nevertheless, it is revisited to highlight that some assumptions given in [23, Lemma 4.6] are not necessary for Lemma 5; for example, τ need not be less than or equal to τ0 as stated in [23, Lemma 4.6] but can be any positive real number.

Recall that the sequence {τ(n)} generated by Algorithm 2 has a uniform lower bound τ0 by Lemma 2. Hence, for any n≥0, we get

where (i), (ii), and (iii) are because of Lemmas 5, 1, and 4, respectively. Starting from Eq. 13, we readily obtain the following convergence theorems for Algorithm 2 by proceeding in the same manner as in [23, Appendices A.3 and A.4].

Suppose that a,b>0 satisfy the inequality

We also need the following lemma that was presented in [23, Lemma A.2].

By Lemma 6, it follows that

which is the desired result. ■