This paper extends the classical Ostrogradsky-Hermite reduction for rational functions to more general functions in primitive extensions of certain types. For an element f in such an extension K, the extended reduction decomposes f as the sum of a derivative in K and another element r such that f has an antiderivative in K if and only if r=0; and f has an elementary antiderivative over K if and only if r is a linear combination of logarithmic derivatives over the constants when K is a logarithmic extension. Moreover, r is minimal in some sense. Additive decompositions may lead to reduction-based creative-telescoping methods for nested logarithmic functions, which are not necessarily D-finite. 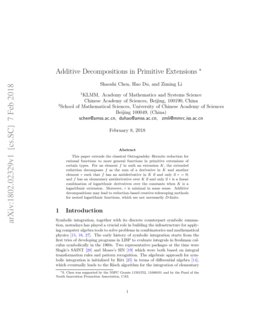 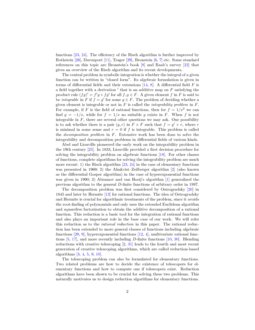 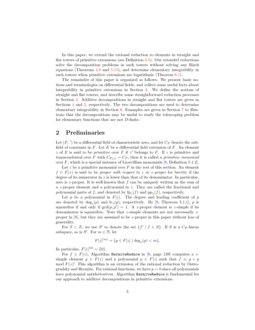 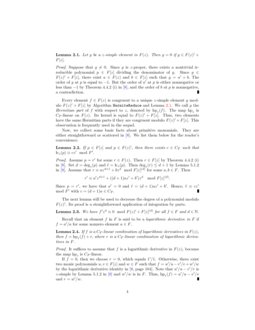 Symbolic integration, together with its discrete counterpart symbolic summation, nowadays has played a crucial role in building the infrastructure for applying computer algebra tools to solve problems in combinatorics and mathematical physics [15, 16, 27]. The early history of symbolic integration starts from the first tries of developing programs in LISP to evaluate integrals in freshman calculus symbolically in the 1960s. Two representative packages at the time were Slagle’s SAINT [28] and Moses’s SIN [19]

which were both based on integral transformation rules and pattern recognition. The algebraic approach for symbolic integration is initialized by Ritt

The central problem in symbolic integration is whether the integral of a given function can be written in “closed form”. Its algebraic formulation is given in terms of differential fields and their extensions [14, 8]. A differential field F is a field together with a derivation ′ that is an additive map on F satisfying the product rule (fg)′=f′g+fg′ for all f,g∈F. A given element f in F is said to be integrable in F if f=g′ for some g∈F. The problem of deciding whether a given element is integrable or not in F is called the integrability problem in F. For example, if F is the field of rational functions, then for f=1/x2 we can find g=−1/x, while for f=1/x no suitable g exists in F. When f is not integrable in F, there are several other questions we may ask. One possibility is to ask whether there is a pair (g,r) in F×F such that f=g′+r, where r is minimal in some sense and r=0 if f is integrable. This problem is called the decomposition problem in F. Extensive work has been done to solve the integrability and decomposition problems in differential fields of various kinds.

The decomposition problem was first considered by Ostrogradsky [20] in 1845 and later by Hermite [13] for rational functions. The idea of Ostrogradsky and Hermite is crucial for algorithmic treatments of the problem, since it avoids the root-finding of polynomials and only uses the extended Euclidean algorithm and squarefree factorization to obtain the additive decomposition of a rational function. This reduction is a basic tool for the integration of rational functions and also plays an important role in the base case of our work. We will refer this reduction as to the rational reduction in this paper. The rational reduction has been extended to more general classes of functions including algebraic functions [29, 9], hyperexponential functions [12, 4], multivariate rational functions [5, 17], and more recently including D-finite functions [10, 30]. Blending reductions with creative telescoping [2, 31] leads to the fourth and most recent generation of creative telescoping algorithms, which are called reduction-based algorithms [3, 4, 5, 9, 10].

In this paper, we extend the rational reduction to elements in straight and flat towers of primitive extensions (see Definition 3.5). Our extended reductions solve the decomposition problems in such towers without solving any Risch equations (Theorems 4.8 and 5.15), and determine elementary integrability in such towers when primitive extensions are logarithmic (Theorem 6.1).

The remainder of this paper is organized as follows. We present basic notions and terminologies on differential fields, and collect some useful facts about integrability in primitive extensions in Section 2. We define the notions of straight and flat towers, and describe some straightforward reduction processes in Section 3. Additive decompositions in straight and flat towers are given in Sections 4 and 5, respectively. The two decompositions are used to determine elementary integrability in Section 6. Examples are given in Section 7 to illustrate that the decompositions may be useful to study the telescoping problem for elementary functions that are not D-finite.

Let z be a primitive monomial over F in the rest of this section. An element f∈F(z) is said to be proper with respect to z or z-proper for brevity if the degree of its numerator in z is lower than that of its denominator. In particular, zero is z-proper. It is well-known that f can be uniquely written as the sum of a z-proper element and a polynomial in z. They are called the fractional and polynomial parts of f, and denoted by fpz(f) and ppz(f), respectively.

Let p be a polynomial in F[z]. The degree and leading coefficient of p are denoted by degz(p) and lcz(p), respectively. By [8, Thereom 5.1.1], p is squarefree if and only if gcd(p,p′)=1. A z-proper element is z-simple if its denominator is squarefree. Note that z-simple elements are not necessarily z-proper in [8], but they are assumed to be z-proper in this paper without loss of generality.

For f∈F(z), Algorithm HermiteReduce in [8, page 139] computes a z-simple element g∈F(z) and a polynomial p∈F[z] such that f≡g+pmodF(z)′. This algorithm is an extension of the rational reduction by Ostrogradsky and Hermite. For rational functions, we have p=0 since all polynomials have polynomial antiderivatives. Algorithm HermiteReduce is fundamental for our approach to additive decompositions in primitive extensions.

Now, we collect some basic facts about primitive monomials. They are either straightforward or scattered in [8]. We list them below for the reader’s convenience.

The next lemma will be used to decrease the degree of a polynomial modulo F(z)′. Its proof is a straightforward application of integration by parts.

Recall that an element f in F is said to be a logarithmic derivative in F if f=a′/a for some nonzero element a∈F.

It suffices to assume that f is a logarithmic derivative in F(z), because the map hpz is CF-linear.

The following lemma tells us a way to modify the leading coefficient of a polynomial in Kn−1[tn] via integration by parts and Algorithm HermiteReduce.

The next lemma will be used in Section 5. We present it below because it holds for primitive towers.

We proceed by induction on n. If n=1, then set p0=p, because there is no requirement on hc(p0). Assume that n>1 and that the lemma holds for n−1.

Let K0=C(x) with the usual derivation in x. Let

is straight, while the tower

In this paper, we consider additive decompositions for elements in either straight or flat towers with K0=C(t0).

By the rational reduction, t′1=u′+v for some u,v∈K0 with v being t0-simple. Then v is nonzero, since C=CKn. The second assertion can be proved similarly.

In this section, we assume that the tower (3.1) is straight and that K0=C(t0) with the usual derivation with respect to t0. The subfield C of constants is denoted by K−1 in recursive definitions and induction proofs to be carried out.

Our idea is reducing a polynomial in Kn−1[tn] to another of lower degree via integration by parts, whenever it is possible. The notion of tn-rigid elements describes r∈Kn−1 such that rtdn cannot be congruent to a polynomial of degree lower than d modulo K′n.

The next lemma, together with Lemma 2.2, reveals that a nonzero polynomial p in Kn−1[tn] with a tn-rigid leading coefficient has no antiderivative in Kn.

for some c∈C, then both r and c are zero.

In Kn−1[tn], we define a class of polynomials that have no antiderivatives in Kn.

For n≥0, a polynomial in Kn−1[tn] is said to be tn-straight if its leading coefficient is tn-rigid.

Next, we reduce a polynomial to a tn-straight one.

If p=0, then we choose q=0. Assume that p is nonzero. We proceed by induction on n.

Assume that n>0 and that the lemma holds for n−1. Let p∈Kn−1[tn] with degree d and leading coefficient ℓ. By Algorithm HermiteReduce, there are f,g,u,v∈Kn−1 with g,v being tn−1-simple, and h,w∈Kn−2[tn−1] such that

where c∈C, a∈Kn−1 and r∈Kn−1 is tn-rigid. The expression helps us decrease degrees. To this end, we consider two cases.

In both cases, r is tn-rigid by Definition 4.1.

Below is an additive decomposition in a straight tower.

For f∈Kn, the following assertions hold.

By Lemma 4.6, h can be replaced by a tn-straight polynomial p.

The integrand is f:=1/t22+t1t22, in which the notation is introduced in Example 4.2. By Algorithm HermiteReduce, we have

In this section, we let the tower (3.1) be flat. The ground field K0 will be specialized to C(t0) later in this section. We are not able to fully carry out the same idea in Section 4, because hpti−1(t′i)=0 for all i=2,…,n. This spoils Lemma 4.3 and Proposition 4.5. So we need to study integrability in a flat tower differently.

This section is divided into two parts. First, we extend Lemma 2.3 to the differential ring K0[t1,…,tn]. Second, we present a flat counterpart of the results in Section 4.

Let us denote K0[t1,…,tn] by Rn. For a monomial ξ in t1, …, tn, the C-linear subspace {p∈Rn∣p≺ξ} is denoted by R(ξ)n. The notion of scales is motivated by the following example.

The first and third congruences lead to monomials lower than ξ0 and ξ2, respectively. But the second one leads to t2, which is higher than ξ1. The notion of scales aims to prevent the second congruence from the reduction to be carried out.

Notably, if p∈K0, then the scale of p with respect to n is equal to n, which varies as n does. Otherwise, the scale is fixed by hm(p) no matter in which ring p lives.

The next lemma extends Lemma 2.3 and indicates what kind of integration by parts will be used for reduction.

(i) It follows from integration by parts and the fact that  ξ′ belongs to R(ξ)n.

If ξ=1, then s=n and L′nξ∈K′n. The assertion clearly holds. Assume that ξ=tess⋯tenn with es>0. Then L′sξ=L′s−1ξ+cst′sξ. Note that L′s−1ξ belongs to K′n+R(ξ)n by a direct use of integration by parts. Set η=ξ/tess. Then the term cst′sξ is equal to cses+1(tes+1s)′η. Integration by parts leads to

For every k with 1≤k≤n, an element of K0 is said to be k-rigid if either it is equal to zero or it is t0-simple and is not a C-linearly combination of t′1,…,t′k.