We present two a posteriori error estimators for the virtual element method (VEM) based on global and local flux reconstruction in the spirit of [5]. The proposed error estimators are reliable and efficient for the h-, p-, and hp-versions of the VEM. This solves a partial limitation of our former approach in [6], which was based on solving local nonhybridized mixed problems. Differently from the finite element setting, the proof of the efficiency turns out to be simpler, as the flux reconstruction in the VEM does not require the existence of polynomial, stable, divergence right-inverse operators. Rather, we only need to construct right-inverse operators in virtual element spaces, exploiting only the implicit definition of virtual element functions. The theoretical results are validated by some numerical experiments on a benchmark problem. 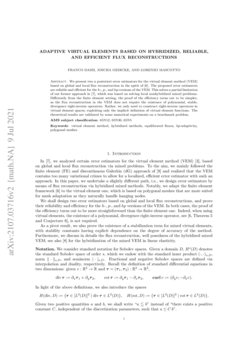 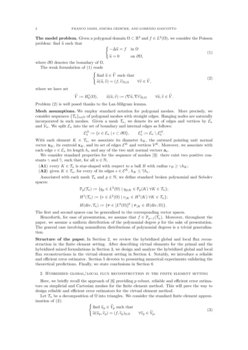 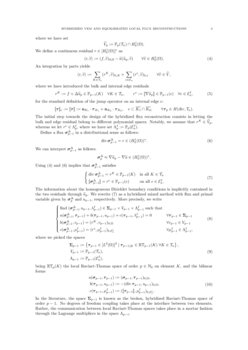 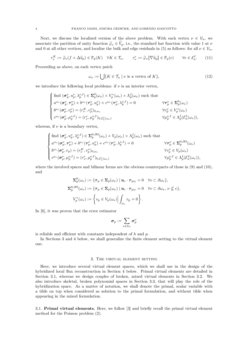 We study numerically the dispersion and dissipation properties of the pl...
Ilaria Perugia, et al. ∙

In this work we develop an a posteriori error analysis of a conforming m...
Koffi Wilfrid Houédanou, et al. ∙

In [7], we analyzed certain error estimators for the virtual element method (VEM) [3], based on global and local flux reconstruction via mixed problems. To the aim, we mainly followed the finite element (FE) and discontinuous Galerkin (dG) approach of [9] and realized that the VEM contains too many variational crimes to allow for a localized, efficient error estimator with such an approach. In this paper, we undertake a slightly different path, i.e., we design error estimators by means of flux reconstruction via hybridized mixed methods. Notably, we adapt the finite element framework [6] to the virtual element one, which is based on polygonal meshes that are more suited for mesh adaptation as they naturally handle hanging nodes.

We shall design two error estimators based on global and local flux reconstructions, and prove their reliability and efficiency for the h-, p-, and hp versions of the VEM. In both cases, the proof of the efficiency turns out to be more straightforward than the finite element one. Indeed, when using virtual elements, the existence of a polynomial, divergence right-inverse operator, see [6, Theorem 5 and Conjecture 6], is not required.

As a pivot result, we also prove the existence of a stabilization term for mixed virtual elements, with stability constants having explicit dependence on the degree of accuracy of the method. Furthermore, we discuss in details the flux reconstruction, well posedness of the hybridized mixed VEM; see also [8] for the hybridization of the mixed VEM in linear elasticity.

. Fractional and negative Sobolev spaces are defined via interpolation and duality, respectively. Recall the definition of standard differential equations in two dimensions: given

In light of the above definitions, we also introduce the spaces

Given two positive quantities a and b, we shall write “a≲b” instead of “there exists a positive constant C, independent of the discretization parameters, such that a≤Cb”.

Given a polygonal domain Ω⊂R2 and f∈L2(Ω), we consider the Poisson problem: find ˜u such that

where ∂Ω denotes the boundary of Ω.

The weak formulation of (1) reads

Problem (2) is well posed thanks to the Lax-Milgram lemma.

We employ standard notation for polygonal meshes. More precisely, we consider sequences {Tn}n∈N of polygonal meshes with straight edges. Hanging nodes are naturally incorporated in such meshes. Given a mesh Tn, we denote its set of edges and vertices by En and Vn. We split En into the set of boundary and internal edges as follows:

With each element K∈Tn, we associate its diameter hK

nK, its centroid xK, and its set of edges EK and vertices VK. Moreover, we associate with each edge e∈En its length he and any of the two unit normal vectors ne.

We consider standard properties for the sequence of meshes [3]: there exist two positive constants γ and ˜γ, such that, for all n∈N,

Associated with each mesh Tn and p∈N, we define standard broken polynomial and Sobolev spaces:

The first and second spaces can be generalized to the corresponding vector spaces.

Henceforth, for ease of presentation, we assume that f∈Pp−1(Tn)

. Moreover, throughout the paper, we assume a uniform distribution of the polynomial degree

p for the sake of presentation. The general case involving nonuniform distributions of polynomial degrees is a trivial generalization.

Structure of the paper.

Let Tn be a decomposition of Ω into triangles. We consider the standard finite element approximation of (2):

We define a continuous residual r∈[H10(Ω)]∗ as

An integration by parts yields

where we have introduced the bulk and internal edge residuals

for the standard definition of the jump operator on an internal edge e:

The initial step towards the design of the hybridized flux reconstruction consists in letting the bulk and edge residual belong to different polynomial spaces. Notably, we assume that rK∈˜Vp, whereas we let re∈ΛIp, where we have set ΛIp:=Pp(EIn).

Define a flux σΔp−1 in a distributional sense as follows:

We can interpret σΔp−1 as follows:

The information about the homogeneous Dirichlet boundary conditions is implicitly contained in the two residuals through ˜up. We rewrite (7) as a hybridized mixed method with flux and primal variable given by σΔp and up−1, respectively. More precisely, we write

where we picked the spaces

being RTp(K) the local Raviart-Thomas space of order p∈N0 on element K, and the bilinear forms

In the literature, the space Σp−1 is known as the broken, hybridized Raviart-Thomas space of order p−1

. No degrees of freedom coupling takes place at the interface between two elements. Rather, the communication between local Raviart-Thomas spaces takes place in a mortar fashion through the Lagrange multipliers in the space

Next, we discuss the localized version of the above problem. With each vertex ν∈Vn, we associate the partition of unity function ˜φν∈˜Vp, i.e., the standard hat function with value 1 at ν and 0 at all other vertices, and localize the bulk and edge residuals in (5) as follows: for all ν∈Vn,

Proceeding as above, on each vertex patch

we introduce the following local problems: if ν is an interior vertex,

whereas, if ν is a boundary vertex,

where the involved spaces and bilinear forms are the obvious counterparts of those in (9) and (10), and

In [6], it was proven that the error estimator

is reliable and efficient with constants independent of h and p.

In Sections 3 and 4 below, we shall generalize the finite element setting to the virtual element one.

Here, we follow [3] and briefly recall the primal virtual element method for the Poisson problem (2).

Given p∈N, for all K∈Tn, we introduce the primal local space

We have that Pp(K)⊆˜Vp(K). Next, consider {mKα}p−2|α|=0 any basis of Pp−2(K), whose elements are invariant with respect to translations and dilations. The following set of linear functionals of ˜Vp(K) is a set of unisolvent degrees of freedom [3]: given ˜vp∈˜Vp(K),

The global virtual element space together with its set of degrees of freedom is constructed via a standard H1-conforming coupling of their local counterparts and strongly imposing the Dirichlet boundary conditions:

Through the degrees of freedom detailed in Section 3.1.1, it is possible to compute two local orthogonal projectors onto polynomial space. The first one is the energy projector ˜Π∇p:˜Vp(K)→Pp(K) defined as follows: given ˜vp in ˜Vp(K),

Following [3], we split the bilinear form ˜a(⋅,⋅) into local contributions:

We approximate each local bilinear form ˜aK(⋅,⋅) with the following discrete counterpart: for all ˜up and ˜vp in ˜Vp(K),

where the stabilizing term ˜SK(⋅,⋅) is any bilinear form computable via the degrees of freedom and satisfying the following bounds: there exist positive stability constants ˜α∗ and ˜α∗ such that

The global discrete bilinear form for the primal formulation is given by the sum of the above local contributions:

As for the discretization of the right-hand side, we pick

Here, we introduce stable couples of broken, mixed virtual element spaces. As for the flux space, the local spaces are those introduced in [4], yet the global space consists of piecewise discontinuous functions as in [8] for the elasticity case. Furthermore, we design suitable bilinear forms appearing in the hybridized mixed formulations of Section 4 below.

Given p∈N0, for all K∈Tn, we introduce the local mixed space [4]

where G⊥(K) is any completion of Gp(K) in [Pp(K)]2. Denote the dimension of Gp(K) and G⊥p(K) by gp and g⊥p, respectively. Moreover, consider {gα}gpα=1 and {g⊥α}g⊥pα=1 any bases of Gp(K) and G⊥p(K), consisting of elements that are invariant with respect to translations and dilations; we refer to [bricksVEMmixed] for explicit choices of such bases. The following set of linear functionals of Σp(K) is a set of unisolvent degrees of freedom [4]: given τp∈Σp(K),

Differently from the standard Raviart-Thomas approach of [4], we do not construct the corresponding global space by imposing H(div) conformity. Rather, we hybridize the space, see [8, 1], and therefore consider the following global discontinuous mixed space:

We further introduce the space taking care of the scalar variable. To the aim, we simply set

Through the degrees of freedom detailed in Section 3.2.1, it is possible to compute [4] a vector, piecewise L2 orthogonal projector Π0p:Σp(K)→[Pp(K)]2, which is defined as follows: for all qKp and τp∈Σp(K),

We approximate each local bilinear form aKp(⋅,⋅) with the following discrete counterpart: for all σp and τp in Σp(K),

where the stabilizing term SK(⋅,⋅) is any bilinear form computable via the degrees of freedom and satisfying the following bounds: there exist positive stability constants α∗ and α∗ such that

An explicit choice of SK(⋅,⋅) will be derived and analyzed in Appendix A below. Importantly, we shall show that the stability constants depend on p algebraically only.

The global discrete bilinear form for mixed virtual elements is given by the sum of the above local contributions:

The choice of the degrees of freedom in Section 3.2.1 allows for the explicit computation of the local divergence of any function τp∈Σp(K) on each element K∈Tn; see [4]. Therefore, we also define the exactly computable bilinear form

Here, we introduce piecewise discontinuous polynomial spaces, and the related bilinear forms and their properties, which will be instrumental in the design of the hybridized flux reconstruction of Section 4 below.

Given p∈Tn, we introduce the hybridization space

The following set of linear functionals is a global set of degrees of freedom for ΛIp: given λIp∈ΛIp,

We introduce a bilinear form that will be instrumental in the design of the hybridized virtual element method. To the aim, we first define the jump operator across an internal edge e∈EIn: for any τ∈H(div,Tn),

To analyze hybridized virtual elements, it is convenient to prove the existence of a stable, broken H(div) lifting operator L:L2(EIn)→H(div,Tn) such that

where βc is a positive constant, independent of the discretization parameters.

There exists a stable lifting operator L as in (17).

For all μIp∈ΛIp, we have to construct a flux L(μIp)=τp∈Σp satisfying (17). To the aim, we define τp in each element K as τp=∇φ, where φ is the solution to the following local elliptic problems on each K∈Tn:

where cK∈R is fixed so that the following compatibility condition is valid:

The above Neumann problem is well posed since the compatibility condition (18) is valid.

Additionally, for all K∈Tn, we observe that

The first term on the right-hand side is zero, since Δφ is constant and φ has zero average over K. Thus, the trace and the Poincaré inequalities yield