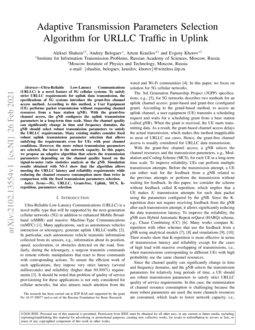 One of the main novelties in 5G is theflexible Time Division Duplex (TDD...
B. Soret, et al. ∙

Performance Analysis of NOMA for Ultra-Reliable and Low-Latency Communications

Real-Time Applications (RTA) are among the most important use cases for ...
Dmitry Bankov, et al. ∙

In this work, we experimentally assess the transmission of a PDCP-RLC vi...
Anas El Ankouri, et al. ∙

Ultra-Reliable Low-Latency Communications (URLLC) is a novel traffic type that will be supported by the next-generation cellular networks (5G) in addition to enhanced Mobile Broadband (eMBB) and massive Machine-Type Communications (mMTC) [1]. Many applications, such as autonomous vehicles interaction or telesurgery, generate uplink URLLC-traffic [2]. In particular, each autonomous vehicle transmits information collected from its sensors, e.g., information about its position, speed, acceleration, or obstacles detected on the road. Similarly, during the telesurgery, a surgeon transmits commands to remote robotic manipulators that react to these commands with corresponding actions. To ensure the efficient work of such applications, they impose very strict latency (several milliseconds) and reliability (higher than 99.999%) requirements [3]. It should be noted that problem of quality of service provisioning for these applications is not only considered for cellular networks, but also attracts much attention from the wired and Wi-Fi communities [4]. In this paper, we focus on solution for 5G cellular networks.

The 3rd Generation Partnership Project (3GPP) specifications, e.g., [5], for 5G networks describes two methods for an uplink channel access: grant-based and grant-free (configured grant). According to the grand-based method, to access an uplink channel, a user equipment (UE) transmits a scheduling request and waits for a scheduling grant from a base station (called gNB). When the grant is received, the UE starts transmitting data. As a result, the grant-based channel access delays the actual transmission, which makes this method inapplicable to most of URLLC use cases. Hence, the grant-free channel access is usually considered for URLLC data transmission.

. Their results show that K-repetition is more effective in terms of transmission latency and reliability except for the cases of high load with massive overlapping of transmissions, i.e., when transmissions corresponding to different UEs with high probability use the same channel resources.

Since the channel quality can significantly change in time and frequency domains, and the gNB selects the transmission parameters for relatively long periods of time, a UE should use robust transmission parameters to satisfy strict URLLC quality of service requirements. In this case, the minimization of channel resource consumption is challenging because the more robust parameters are used, the more channels resources are consumed, which leads to lower network capacity, i.e., the number of data flows that can be served simultaneously. Studies [7, 8, 9, 10] consider usage of fixed MCS and the number of transmission attempts, so they do not consider the dynamic parameter selection problem. The papers [11, 12] studies the selection of K

The channel resource allocation problem for K-repetition is considered in [13]. The authors propose to divide available channel resources into multiple groups and randomly select a group for each transmission attempt. They propose to select MCS corresponding to the number of these groups (higher number of groups corresponds to higher code rates). This study shows that the K-repetitions scheme can provide the required packet loss probability with the considered in the paper transmission parameters values. However, the authors do not provide any adaptive method for selecting these parameters, e.g., depending on the channel quality. The paper [14] provides the algorithm for selecting K and the channel resources for transmission. However, this work considers fixed probabilities of successful decoding without taking into account that they depend on the used MCS. The paper [15] provides the number of transmission attempts (i.e., K) selection algorithm based on an estimation of fading correlation function. The authors suggest using two attempts in the case of low correlation and four in the case of high correlation. Numerical results show that this method can increase reliability and resource efficiency in a multi-user scenario compared to using a fixed number of attempts. However, this work does not consider the problem of selecting MCS and proposes to use a fixed robust MCS.

The provided above literature analysis show that the existing papers do not provide any adaptive method for selecting MCS depending on channel conditions. In this paper, we propose the adaptive transmission parameters (i.e., MCS and number of transmission attempts) selection algorithm based on estimating of the packet loss ratio for each parameter configuration using the Signal-to-Noise Ratio (SNR) statistics at the gNB.

The rest of the paper is organized as follows. In Section II, we introduce the proposed algorithm. In Section III, we evaluate its preference with the NS-3 simulator. Finally, Section IV concludes the paper.

In this paper, we propose the transmission parameters selection algorithm that allows a gNB to select MCS and the number of transmission attempts for a UE transmitting URLLC packets in uplink.

Let us consider a UE served by a gNB. The gNB configures the parameters for the UE, i.e., the resources that are available for its uplink transmissions and the transmission parameters, i.e., the MCS and the number of transmission attempts K. To change the parameters configuration at the UE, the gNB transmits to the UE the configuration messages that include the new MCS and the number of transmission attempts. In its turn, the UE updates the configuration upon the reception of the new parameters. The time-frequency resources assigned to the UE are divided into multiple groups called Resource Block Groups (RBGs). When the UE transmits a packet, it selects an appropriate number of RBGs corresponding to the selected MCS and the packet size. To avoid correlated errors in the consecutive RBGs, we assume that the UE selects RBGs uniformly spaced in the frequency domain. These RBGs are selected independently for each attempt. The time slots for repeated attempts are also selected uniformly spaced within the packet delay budget to avoid correlated errors in time.

Initially, after the connection establishment, the gNB configures the most robust uplink transmission parameters (MCS 0 and Kmax, where Kmax is the maximum number of transmission attempts) because there is no actual SNR statistics for this UE. Based on Sounding Reference Signals (SRS) periodically transmitted by the UE, the gNB estimates the average SNR for each RBG. Then, for each combination of the transmission parameters MCS and K (K=1,\ldots,Kmax), the gNB estimates the BLock Error Rate (BLER), i.e., the error probability of a single transmission attempt, as follows:

Let us describe the third step in more detail. According to the EESM model, the gNB maps vector of SNRs for the selected RBGs to a single effective SNR as follows:

where SNRn is the SNR value in the n-th RBG, v is the set of allocated RBGs, and β is a scaling parameter. We use β values obtained in [17].

We assume that the gNB uses CC to decode several HARQ transmissions. The effective SNR after q transmission attempts is calculated as follows:

The obtained effective SNR value is mapped to the BLER value using the SNR-BLER curves for the corresponding MCS. In this study, we use SNR-BLER curves (Fig. 1) obtained for 25 iterations of a decoder for packet size 32 byte and physical layer parameters described in Section III-A.

where W is the window size, ˆPLRMCS,K(t) is the averaged PLR estimation after the t-th SRS reception.

We evaluate the performance of the proposed algorithm with the NS-3 simulator [18]. We consider a single gNB and a single UE that generates Constant Bit Rate (CBR) traffic in the uplink. Specifically, 32 bytes packets are transmitted with periodicity 10 ms. Each packet should be delivered within the 1 ms time interval with a probability higher than 99.999%. SRSs are transmitted every 5 ms.

Let us describe physical layer parameters. Following [19], we consider mini-slots (subslots) that consist of two Orthogonal Frequency-Division Multiplexing (OFDM) symbols corresponding to control and data channels. The duration of the OFDM symbol equals 35.7 μs that corresponds to the 30 kHz interval between subcarriers. So, there are 14 slots within the packet delay budget. The bandwidth equals 100 MHz and consists of 16 RBGs [5]. The UE transmission power equals 23 dBm, and it is equally distributed between the selected RBGs. We summarize all simulation parameters in Table I.

Iii-B Analysis of the results

As a characteristic of the average channel quality, which decreases with the distance d between the UE and the gNB, we use the value SNRwb called the wideband SNR. This value is calculated as follows: SNRwb=(PTXPL(d))/(NoiseBW), where PTX is a UE transmission power, BW is the available bandwidth, PL(d) is the pathloss, Noise is a noise power spectral density at the gNB. To model the channel quality changes in time and frequency domains, we use the Extended Pedestrian A (EPA) fading model [21].

First, let us estimate the reduction of resource consumption that can be achieved with the adaptive transmission parameters selection. For each SNRwb value and each parameter configuration {MCS, K}, we carry out the full experiment and consider the PLR and the average number of used RBGs obtained in each experiment. Then, for each SNRwb, we select the optimal configuration that allows satisfying the URLLC requirements while consuming the minimal number of RBGs. We compare the resource consumption provided by the proposed adaptive algorithm with the resource consumption provided by the optimal configuration and by the fixed selection of the most robust MCS, i.e., MCS 0 (see Fig. 3). The number of transmission attempts K≤Kmax for MCS 0 equals the minimal number that allows satisfying the URLLC requirements. We can see that the proposed algorithm provides more than three times a reduction for the resource consumption in comparison with the MCS 0 selection. Moreover, the results for the proposed algorithm are close to optimal for SNRwb≥−1 dB. Since even with the most robust configuration the URLLC requirements cannot be satisfied at SNRwb<−4 dB, we assume in the further experiments that the UE is located uniformly in the circle with center at gNB and radius corresponding to SNRwb=−4 dB.

Fig. 5 shows PLRlow and PLRhigh thresholds selected by the proposed algorithm. We can see that PLRhigh does not depend on the window size and equals 10−5, which corresponds to 99.999% URLLC reliability requirement. The threshold PLRlow increases with the window size and tends to PLRhigh for large window size because the large window allows more conservatively estimating the packet loss ratio provided by different configurations, and thus it does not require to select the lower values for PLRlow.

According to Fig. 6, the usage of two thresholds allows the gNB to rarely reconfigure the transmission parameters. In particular, for W=1s the parameters should be reconfigured once per 40 seconds on average. The reconfiguration frequency further decreases when the window size increases.

In this paper, we assume that the gNB allocates dedicated channel resources to each UE, and transmission errors are only caused by fading. In our future works, we are going to consider a scenario in which several UEs can use shared grant-free resources to transmit their packets. We will adapt the proposed algorithm to take into account possible interference caused by the transmission of other UEs in shared resources.