We propose an adaptive smoothing algorithm based on Nesterov's smoothing technique in Nesterov2005c for solving "fully" nonsmooth composite convex optimization problems. Our method combines both Nesterov's accelerated proximal gradient scheme and a new homotopy strategy for smoothness parameter. By an appropriate choice of smoothing functions, we develop a new algorithm that has the O(1/ε)-worst-case iteration-complexity while preserves the same complexity-per-iteration as in Nesterov's method and allows one to automatically update the smoothness parameter at each iteration. Then, we customize our algorithm to solve four special cases that cover various applications. We also specify our algorithm to solve constrained convex optimization problems and show its convergence guarantee on a primal sequence of iterates. We demonstrate our algorithm through three numerical examples and compare it with other related algorithms. 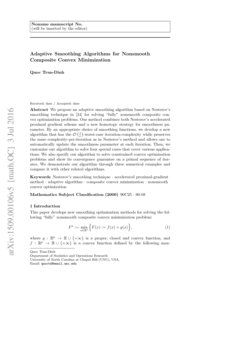 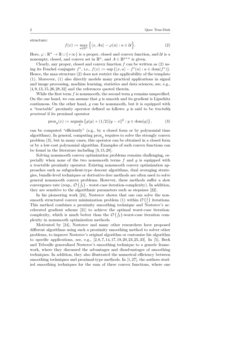 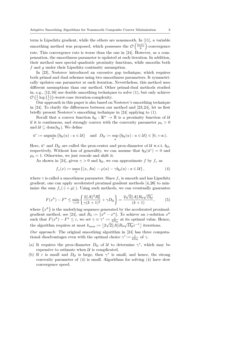 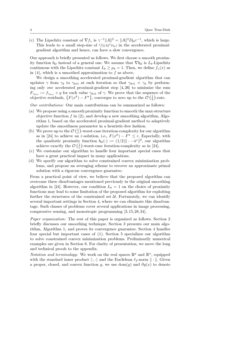 Here, φ:Rn→R∪{+∞} is a proper, closed and convex function, and U is a nonempty, closed, and convex set in Rn, and A∈Rp×n is given.

Clearly, any proper, closed and convex function f can be written as (2) using its Fenchel conjugate f∗, i.e., f(x):=sup{⟨x,u⟩−f∗(u):u∈dom(f∗)}. Hence, the max-structure (2) does not restrict the applicability of the template (1). Moreover, (1

While the first term f is nonsmooth, the second term g remains unspecified. On the one hand, we can assume that g is smooth and its gradient is Lipschitz continuous. On the other hand, g can be nonsmooth, but it is equipped with a “tractable” proximity operator defined as follows: g is said to be tractably proximal if its proximal operator

can be computed “efficiently” (e.g., by a closed form or by polynomial time algorithms). In general, computing proxg requires to solve the strongly convex problem (3), but in many cases, this operator can be obtained in a closed form or by a low-cost polynomial algorithm. Examples of such convex functions can be found in the literature including Bauschke2011 ; Combettes2011a ; Parikh2013 .

In his pioneering work Nesterov2005c , Nesterov shown that one can solve the nonsmooth structured convex minimization problem (1) within O(1ϵ) iterations. This method combines a proximity smoothing technique and Nesterov’s accelerated gradient scheme Nesterov1983 to achieve the optimal worst-case iteration-complexity, which is much better than the O(1ϵ2)-worst-case iteration complexity in nonsmooth optimization methods.

Motivated by Nesterov2005c , Nesterov and many other researchers have proposed different algorithms using such a proximity smoothing method to solver other problems, to improve Nesterov’s original algorithm or customize his algorithm to specific applications, see, e.g., baes2009smoothing ; Becker2011b ; Becker2011a ; chen2014first ; Goldfarb2012 ; Necoara2008 ; Nedelcu2014 ; Nesterov2005d ; Nesterov2007d ; TranDinh2012a . In Beck2012a , Beck and Teboulle generalized Nesterov’s smoothing technique to a generic framework, where they discussed the advantages and disadvantages of smoothing techniques. In addition, they also illustrated the numerical efficiency between smoothing techniques and proximal-type methods. In argyriou2014hybrid ; orabona2012prisma , the authors studied smoothing techniques for the sum of three convex functions, where one term is Lipschitz gradient, while the others are nonsmooth. In boct2012variable , a variable smoothing method was proposed, which possesses the O(ln(k)k)-convergence rate. This convergence rate is worse than the one in Nesterov2005c . However, as a compensation, the smoothness parameter is updated at each iteration. In addition, their method uses special quadratic proximity functions, while smooths both f and g under their Lipschitz continuity assumption.

In Nesterov2005d , Nesterov introduced an excessive gap technique, which requires both primal and dual schemes using two smoothness parameters. It symmetrically updates one parameter at each iteration. Nevertheless, this method uses different assumptions than our method. Other primal-dual methods studied in, e.g., Bot2013 ; Devolder2012 use double smoothing techniques to solve (1), but only achieve O(1εlog(1ε))-worst-case iteration-complexity.

Recall that a convex function bU:Rn→R is a proximity function of U if it is continuous, and strongly convex with the convexity parameter μb>0 and U⊆dom(bU). We define

Here, ¯uc and DU are called the prox-center and prox-diameter of U w.r.t. bU, respectively. Without loss of generality, we can assume that bU(¯uc)=0 and μb=1. Otherwise, we just rescale and shift it.

where γ is called a smoothness parameter. Since fγ is smooth and has Lipschitz gradient, one can apply accelerated proximal gradient methods Beck2009 ; Nesterov2007 to minimize the sum fγ(⋅)+g(⋅). Using such methods, we can eventually guarantee

where {xk} is the underlying sequence generated by the accelerated proximal-gradient method, see Nesterov2005c , and R0:=∥x0−x⋆∥. To achieve an ε-solution xk such that F(xk)−F⋆≤ε, we set γ≡γ∗:=ε2DU at its optimal value. Hence, the algorithm requires at most kmax:=⌊2√2∥A∥R0√DUε−1⌋ iterations.

The original smoothing algorithm in Nesterov2005c has three computational disadvantages even with the optimal choice γ∗:=ε2DU of γ.

Our approach is briefly presented as follows. We first choose a smooth proximity function bU instead of a general one. We assume that ∇bU is Lb-Lipschitz continuous with the Lipschitz constant Lb≥μb=1. Then, we define fγ(x) as in (4), which is a smoothed approximation to f as above.

We design a smoothing accelerated proximal-gradient algorithm that can updates γ from γk to γk+1 at each iteration so that γk+1<γk by performing only one accelerated proximal-gradient step Beck2009 ; Nesterov2007 to minimize the sum Fγk+1:=fγk+1+g for each value γk+1 of γ. We prove that the sequence of the objective residuals, {F(xk)−F⋆}, converges to zero up to the O(1k)-rate.

Our main contributions can be summarized as follows:

From a practical point of view, we believe that the proposed algorithm can overcome three disadvantages mentioned previously in the original smoothing algorithm in Nesterov2005c . However, our condition Lb=1 on the choice of proximity functions may lead to some limitation of the proposed algorithm for exploiting further the structures of the constrained set U. Fortunately, we can identify several important settings in Section 4, where we can eliminate this disadvantage. Such classes of problems cover several applications in image processing, compressive sensing, and monotropic programming Bauschke2011 ; Combettes2011a ; Parikh2013 ; Yang2011 .

The rest of this paper is organized as follows. Section 2 briefly discusses our smoothing technique. Section 3 presents our main algorithm, Algorithm 1, and proves its convergence guarantee. Section 4 handles four special but important cases of (1). Section 5 specializes our algorithm to solve constrained convex minimization problems. Preliminarily numerical examples are given in Section 6. For clarity of presentation, we move the long and technical proofs to the appendix.

We work on the real spaces Rp and Rn, equipped with the standard inner product ⟨⋅,⋅⟩ and the Euclidean ℓ2-norm ∥⋅∥. Given a proper, closed, and convex function g, we use dom(g) and ∂g(x) to denote its domain and its subdifferential at x, respectively. If g is differentiable, then ∇g(x) stands for its gradient at x.

denote its smallest and largest eigenvalues of

X, respectively; and cond(X) is the condition number of X. Given a nonempty, closed and convex set X, dist(x,X) denotes the distance from x to X.

Let bU be a prox-function of the nonempty, closed and convex set U with the strong convexity parameter μb=1. In addition, bU is smooth on U, and its gradient ∇bU is Lipschitz continuous with the Lipschitz constant Lb≥μb=1. In this case, bU is said to be Lb-smooth. As a default example, bU(⋅):=(1/2)∥⋅−¯uc∥2 for fixed ¯uc∈U satisfies our assumptions with Lb=μb=1. Let ¯uc be the b-prox-center point of U, i.e., ¯uc:=argminu{bU(u):u∈U}. Without loss of generality, we can assume that bU(¯uc)=0. Otherwise, we consider ¯bU(u):=bU(u)−bU(¯uc).

Given a convex function φ∗(z):=maxu{⟨z,u⟩−φ(u):u∈U}, we define a smoothed approximation ofφ∗ as

where γ>0 is a smoothness parameter. We note that φ∗ is not a Fenchel conjugate of φ unless U=dom(φ). We denote by u∗γ(x) the unique optimal solution of the strongly concave maximization problem (6), i.e.:

Associated with φ∗γ, we consider a smoothed function for f in (2) as

Then, the following lemma summaries the properties of the smoothed function φ∗γ defined by (6) and fγ defined by (8), whose proof can be found in Tran-Dinh2014a .

The function φ∗γ defined by (6) is convex and smooth. Its gradient is given by ∇φ∗γ(z):=u∗γ(z) which is Lipschitz continuous with the Lipschitz constant Lφ∗γ:=γ−1. Consequently, for any z,¯z∈Rn, we have

As a consequence, fγ defined by (8) is convex and smooth. Its gradient is given by ∇fγ(x)=Au∗γ(A⊤x), which is Lipschitz continuous with the Lipschitz constant Lfγ:=γ−1∥A∥2. In addition, we also have

We emphasize that Lemma 1 provides key properties to analyze the complexity of our algorithm in the next setions.

3 The adaptive smoothing algorithm and its convergence

Associated with (1), we consider its smoothed composite convex problem as

Similar to Nesterov2005c , the main step of Nesterov’s accelerated proximal-gradient scheme Beck2009 ; Nesterov2007 applied to the smoothed problem (12) is expressed as follows:

where ^xk is given, and β>0 is a given step size, which will be chosen later.

The following lemma provides a descent property of the proximal-gradient step (13), whose proof can be found in Appendix A.1.

We now adopt the accelerated proximal-gradient scheme (FISTA) in Beck2009 to solve (12) using an adaptive step-size βk+1:=γk+1∥A∥2, which becomes

By letting tk:=1τk, we can eliminate ~xk in (16) to obtain a compact version

The following lemma provides a key estimate to prove the convergence of the scheme (16) (or (17)), whose proof can be found in Appendix A.2.

for any x∈Rp and Rk is defined by

Moreover, the quantity Rk is bounded from below by

Next, we show one possibility for updating τk and γk, and provide an upper bound for Fγk(xk)−F⋆. The proof of this lemma is moved to Appendix A.3.

The following theorem proves the convergence of Algorithm 1 and estimates its worst-case iteration-complexity.

Consequently, if we set γ1:=R0∥A∥√6DU, which is independent of k, then

For general smooth proximity function bU with Lb>1, we can achieve the O((Lb−1)ln(k)k) convergence rate. When Lb=1, we obtain exactly the O(1k) rate as in Nesterov2005c . In this section, we consider three special cases of (1) where we use the quadratic proximity function bU(⋅):=(1/2)∥⋅−¯uc∥2. Then, we specify Algorithm 1 for the Lg-smooth objective function g in (1).

Let f∗ be the Fenchel conjugate of f. We can write f in the form of (2) as

Hence, Algorithm 1 can be applied to solve (1) using the proximal operator of f and g. The worst-case complexity bound in Theorem 3.1 becomes O(Ddom(f∗)R0ε), where Ddom(f∗):=maxu∈dom(f∗)∥u∥ is the diameter of dom(f∗).

We consider the following composite convex problem with a linear operator that covers many important applications in practice, see, e.g., argyriou2014hybrid ; Bauschke2011 ; Combettes2011a :

where f and g are two proper, closed and convex functions, and A is a linear operator from Rp to Rn.

We first write f(Ax):=maxu{⟨Ax,u⟩−f∗(u):u∈dom(f∗)}. Next, we choose a quadratic smoothing proximity function bU(u):=(1/2)∥u−¯uc∥2 for fixed ¯uc∈dom(f∗), and define U:=dom(f∗). Using this smoothing prox-function, we obtain a smoothed approximation of f(Ax) as follows:

where βk+1:=γk+1∥A∥−2. Using this proximal gradient step in Algorithm 1, we still obtain the complexity as in Theorem 3.1, which is O(∥x0−x⋆∥∥A∥√DUε), where the domain U:=dom(f∗) of f∗ is assumed to be bounded.

The function φ and the set U in (2) are said to be decomposable if they can be represented as follows: