For large scale on-line inference problems the update strategy is critical for performance. We derive an adaptive scan Gibbs sampler that optimizes the update frequency by selecting an optimum mini-batch size. We demonstrate performance of our adaptive batch-size Gibbs sampler by comparing it against the collapsed Gibbs sampler for Bayesian Lasso, Dirichlet Process Mixture Models (DPMM) and Latent Dirichlet Allocation (LDA) graphical models. 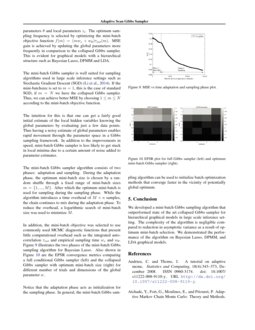 Adaptive MCMC algorithms (Andrieu & Thoms, 2008), (Atchade et al., 2009), (Roberts & Rosenthal, 2009) have been developed to improve mixing and convergence rate by automotically adjusting MCMC parameters. The goal of this paper is to adapt the batch-size in order to improve asymptotic convergence of MCMC. Our algorithm resembles stochastic approximation found to be both theoretically valid and to work well in practice (Mahendran et al., 2012).

Consider a graphical model in Figure 1 where the observed data xi depends on both the global parameters θ and the local parameters zi, where i∈{1,...,N}. The posterior distribution contains a product over a very large N:

We can re-write the posterior in (1) as

where we choose exponential family representation for convenience. In the traditional Gibbs sampling algorithm, the full conditional updates alternate between:

The global update of θ is inefficient since it requires an update of every zi and the summation over a very large N. Since the global parameters θ appear in each local Gibbs sampling update of zi∼exp{s(θ,zi)}

, we can achieve smaller variance by updating

θ more often. Thus, we can find an optimum trade-off between the frequency of latent variable updates and Gibbs sampling performance.

In evaluating MCMC performance we examine mixing time and the convergence rate to stationary distribution (Murphy, 2012). Consider the following update frequencies after burnin for the graphical model in Figure 1:

Frequent updates of θ in (5) increase the number of samples n and help reduce the variance in (8). On the other hand, a larger mini-batch size in (6) results in lower autocorrelation ρt in (10) and therefore greater information content per θ-sample. Finally, a fractional mini-batch size in (7) updates θ multiple times before updating the local parameters zi.

E[f(θ)]. A natural estimator is the sample mean ^f=1n∑ni=1E[f(θi)]. Under squared error loss, our objecitve is to minimize the variance:

Alternatively, we can represent the variance of ¯f:

Let τint≐1+2∑∞t=1ρt be the integrated autocorrelation time of the MCMC, then VAR(¯f)=σ2τint/n. Therefore, τint is a measure of efficiency of the estimator of ¯f. In fact, neff=n/τint is the effective sample size. The autocorrelation function is commonly used to asses convergence and is therefore a good candidate for optimizing the batch size.

Consider a Gibbs sampling algorithm with mini-batch size m for a graphical model in Figure 1. Let wz and wθ be the time of each local and global update, respectively. Given a fixed time budget T, the number of θ-samples we can get is

Therefore, we can re-write the variance in (9) as

Because σ2 and T are fixed, we can formulate our mini-batch objective function as:

Note as the mini-batch size m decreases, the time cost mwz+wθ will decrease linearly, while ρt and therefore τint will increase. This leads to Algorithm 1 for selecting an optimum mini-batch size.

3.1 Probit Regression with Non-conjugate Prior

is the response vector,

X is a known n×d design matrix, and w∈Rd is the unknown vector of regression coefficients. Alternatively, we can re-write the expression as:

Note that w as defined in (15) can be veiwed as a posterior mean of w with likelihood (14) and prior:

) can be represented as a scale mixture of normal distributions

To reduce the dimensionality of w

for big data applications, a one-sided Laplacian or an exponential prior is introduced on the covariance of the hyperplane

w. However, this prior is non-conjugate and requires an efficient sampling algorithm. Conditioned on prior hyper-parameters, the label updates zi are identical to Algorithm (4). The hyper-parameter are updated as derived in (Park & Casella, 2008):

where A=XTX+D−1τ. The full conditional updates above when combined with incremental updates lead to the following incremental Gibbs sampling Algorithm 4.

The mini-batch Gibbs sampler updates are analogous to stochastic gradient and are expected to give a computational advantage for big data applications with a limited time budget T.

where var(ψ|y)=n−1nW+1nB, with B and W representing the in-between chain and within-chain variance, respectively (Gelman et al., 2013).

. A Dirichlet process is a distribution over probability measures

and it defines a conjugate prior for arbitrary measurable spaces:

Applied to mixture modeling, we can describe the graphical model for DPMM in Figure 7 as follows:

The simplest way to fit a DPMM is to modify the collapsed Gibbs sampler for a finite mixture model. By exchangeability, we can assume that zi is the most recent assignment and therefore,

The rest of the algorithm can be summarized as follows:

Figure 6 shows the MSE and purity scores computed at N=200 iterations comparing the Gibbs sampling posterior clustering with the ground truth. The MSE scores were computed by matching inferred clusters using the Hungarian algorithm with Euclidean distance as the cost matrix. The purity score is defined as ∑iNiNpi, where Ni=∑Cj=1Nij and pi=maxjpij, with pij=Nij/Ni where Nij is defined as the number of objects in cluster i that belongs to class j.

Latent Dirichlet Allocation (LDA) is a generative ad-mixture topic model in which every word is assigned to its own topic zid∈{1,...,K} drawn from a document specific distribution θd (Blei et al., 2003).

The generative LDA model can be described as follows:

It is straightforward to derive a full conditional Gibbs sampling algorithm for LDA. However, one can get better performance by analytically integrating out θd and β. This leads to the following collapsed Gibbs sampler expression:

Rather than waiting for the collapsed Gibbs sampler to iterate over all documents D before updating the global topic parameter β, we can divide the corpus into a set of mini-batches M∈{m1,...,mM}. This leads to the following mini-batch Gibbs sampling algorithm:

Figure 8 shows the experimental results on the Brown corpus with K=4 topics, V=6K dictionary and D=250 documents. The perplexity of the test set was to evaluate performance:

Perplexity is computed by evaluating the expression below over S independent chains:

The objective function shows a preference for mini-batch size 16 which also leads to smaller perplexity for a fixed time period.

The mini-batch Gibbs sampler uses a sequential sampling scheme alternating between sampling of the global parameters θ and local parameters zi. The optimum sampling frequency is selected by optimizing the mini-batch objective function f(m)=(mwz+wθ)τint(m). MSE gain is achieved by updating the global parameters more frequently in comparison to the collapsed Gibbs sampler. This is evident for graphical models with a hierarchical structure such as Bayesian Lasso, DPMM and LDA.

(Li et al., 2014). If the mini-batchsize is set to m=1, this is the case of standard SGD, if m=N we have the collapsed Gibbs sampler. Thus, we can achieve better MSE by choosing 1≤m≤N according to the mini-batch objective function.

The intuition for this is that one can get a fairly good initial estimate of the local hidden variables knowing the global parameters by evaluating just a few data points. Thus having a noisy estimate of global parameters enables rapid movement through the parameter space in a Gibbs sampling framework. In addition to the improvements in speed, mini-batch Gibbs sampler is less likely to get stuck in local minima due to a certain amount of noise added to parameter estimates.

In addition, the mini-batch objective was selected to use commonly used MCMC diagnostic functions that present little computational overhead such as the integrated autocorrelation τint and empirical sampling time wz and wθ. Figure 9 illustrates the two phases of the mini-batch Gibbs sampling algorithm for Bayesian Lasso. Also shown in Figure 10 are the EPSR convergence metrics comparing a full conditional Gibbs sampler (left) and the collapsed Gibbs sampler with optimum mini-batch size (right) for different number of trials and dimensions of the global parameter w.

Notice that the adaptation phase acts as initialization for the sampling phase. In general, the mini-batch Gibbs sampling algorithm can be used to initialize batch optimization methods that converge faster in the vicinity of potentially global optimum.

We developed a mini-batch Gibbs sampling algorithm that outperformed state of the art collapsed Gibbs sampler for hierarchical graphical models in large scale inference setting. The complexity of the algorithm is negligible compared to reduction in asymptotic variance as a result of optimum mini-batch selection. We demonstrated the performance of the algorithm on Bayesian Lasso, DPMM, and LDA graphical models.