Constrained submodular maximization has been extensively studied in the recent years. In this paper, we study adaptive robust optimization with nearly submodular structure (ARONSS). Our objective is to randomly select a subset of items that maximizes the worst-case value of several reward functions simultaneously. Our work differs from existing studies in two ways: (1) we study the robust optimization problem under the adaptive setting, i.e., one needs to adaptively select items based on the feedback collected from picked items, and (2) our results apply to a broad range of reward functions characterized by ϵ-nearly submodular function. We first analyze the adaptvity gap of ARONSS and show that the gap between the best adaptive solution and the best non-adaptive solution is bounded. Then we propose two algorithms that achieve bounded approximation ratios. 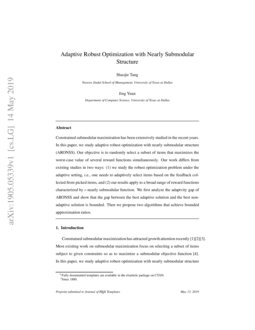 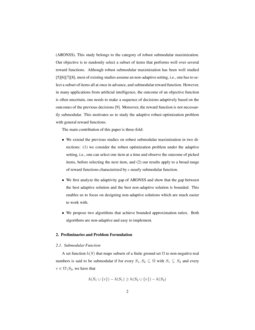 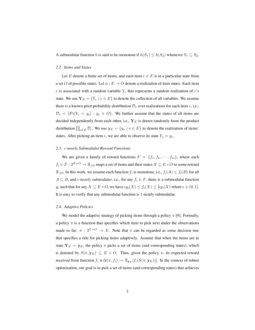 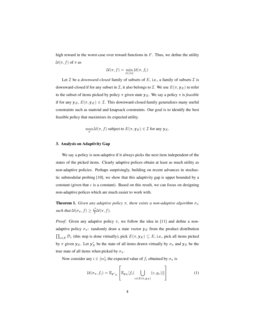 , most of existing studies assume an non-adaptive setting, i.e., one has to select a subset of items all at once in advance, and submodular reward function. However, in many applications from artificial intelligence, the outcome of an objective function is often uncertain, one needs to make a sequence of decisions adaptively based on the outcomes of the previous decisions

golovin2011adaptive . Moreover, the reward function is not necessarily submodular. This motivates us to study the adaptive robust optimization problem with general reward functions.

The main contribution of this paper is three-fold:

A set function h(S) that maps subsets of a finite ground set Ω to non-negative real numbers is said to be submodular if for every S1,S2⊆Ω with S1⊆S2 and every v∈Ω∖S2, we have that

A submodular function h is said to be monotone if h(S1)≤h(S2) whenever S1⊆S2.

Let E denote a finite set of n items, and each item e∈E is in a particular state from a set O of possible states. Let ϕ:E→O denote a realization of item states. Each item e

is associated with a random variable

Ye that represents a random realization of e’s state. We use YE={Ye∣e∈E}

to denote the collection of all variables. We assume there is a known prior probability distribution

De over realizations for each item e, i.e., De={Pr[Ye=ye]:ye∈O}. We further assume that the states of all items are decided independently from each other, i.e., YE is drawn randomly from the product distribution ∏e∈EDe. We use yE={ye∣e∈E} to denote the realization of items’ states. After picking an item e, we are able to observe its state Ye=ye.

We are given a family of reward functions F={f1,f2,⋯,fm}, where each fi∈F:2E×O→R≥0 maps a set of items and their states X⊆E×O to some reward R≥0. In this work, we assume each function fi is monotone, i.e., fi(A)≤fi(B) for all A⊆B, and ϵ-nearly submodular, i.e., for any fi∈F, there is a submodular function gi such that for any X⊆E×O, we have ϵgi(X)≤fi(X)≤1ϵgi(X) where ϵ∈(0,1]. It is easy to verify that any submodular function is 1-nearly submodular.

We model the adaptive strategy of picking items through a policy π golovin2011adaptive . Formally, a policy π is a function that specifies which item to pick next under the observations made so far: π:2V×O→E. Note that π

can be regarded as some decision tree that specifies a rule for picking items adaptively. Assume that when the items are in state

YE=yE, the policy π picks a set of items (and corresponding states), which is denoted by S(π,yE)⊆E×O. Thus, given the policy π, its expected reward received from function fi is U(π,fi):=EyE[fi(S(π,yE))]. In the context of robust optimization, our goal is to pick a set of items (and corresponding states) that achieves high reward in the worst-case over reward functions in F. Thus, we define the utility U(π,F) of π as

We say a policy is non-adaptive if it always picks the next item independent of the states of the picked items. Clearly adaptive polices obtain at least as much utility as non-adaptive policies. Perhaps surprisingly, building on recent advances in stochastic submodular probing bradac2019near , we show that this adaptivity gap is upper bounded by a constant (given that ϵ is a constant). Based on this result, we can focus on designing non-adaptive polices which are much easier to work with.

Given any adaptive policy π, there exists a non-adaptive algorithm σπ such that U(σπ,F)≥ϵ22U(π,F).

Now consider any i∈[m], the expected value of fi obtained by σπ is

Because fi is ϵ-nearly submodular, we have

We next analyze the utility of π. The expected value of fi obtained by π is

Because fi is ϵ-nearly submodular, we have

It was worth noting that Theorem 1 holds when I is a prefix-closed family of constraints, i.e., a family of subsets I is prefix-closed if for any subsequence in I, its prefix also belongs to I.

We first introduce the non-adaptive robust optimization problem with submodular structure. Given any reward function fi, we use fi(V) to denote the expected reward of selecting V⊆E. Given a non-adaptive policy σ, let U(σ,fi):=∑V∈IβσVfi(V) denote the expected reward gained from function fi where βσV is the probability that V is selected by σ. The utility U(σ,F) of σ is U(σ,F)=mini∈[m]U(σ,fi). We next formulate the non-adaptive robust optimization problem as follows.

Before introducing our algorithm, we first introduce some important notations. For a independence system I, the polytope of I is defined as P(I)=conv{1I:I∈I} where 1I∈[0,1]n denotes the vector with entries I one and all other entries zero. Given a vector x∈[0,1]n, the multilinear extension of f is defined as F(x)=∑X⊆Ωf(X)∏i∈Xxi∏i∉X(1−xi). Define the marginal of e for F as F(e|x)=F(x∨1e)−F(x) where x∨1e denotes the component wise maximum.

As a corollary of Theorem 1, i.e., when ϵ=1, the following lemma bounds the adaptivity gap when all reward functions are submodular.

We next propose a continuous greedy algorithm that achieves a constant approximation ratio of P.1. We follow the framework of chekuri2010dependent to derive the following lemma.

Given m submodular functions fi and a value γ, independence system I, the continuous greedy algorithm finds a point x(T)∈P(I) such that Fi(x(T))≥(1−1/e)γ,∀i or outputs a certificate that there is solution with Fi(x(T))≥γ,∀i.

Proof: Consider any vector x. If there exists policy, say σ′, such that U(σ′,fi)≥γ,∀i, we have

In other words, for any fractional solution x, there exits a direction v∗(x)∈P(\emphI) where the entry of e is v∗(x)(e)=∑V∈I∧e∈Vβσ′V such that v∗(x)⋅∇F(x)≥γ−F(x),∀i

. And this direction can be found using linear program. We follow the continuous greedy algorithm and obtain a solution

If such policy does not exist, we output a certificate that there is feasible solution that achieves utility γ. □

Our algorithm returns a solution that achieves approximation ratio 12(1−1/e)ζ where ζ∈[0,1] is the performance loss due to rounding.

In this section, we introduce two algorithms for computing approximate solutions for the general case. Since the adaptivity gap is bounded in Section 3, we focus on building non-adaptive policies. In the rest of this paper, we use σ to denote a non-adaptive policy.

The basic idea of the first algorithm σ1/m (Algorithm 1) is very simple, we first solve maxσU(σ,fi) for each i∈[m], then randomly pick one among m outputs as solution. Since we focus on designing non-adaptive solutions, for notation convenience, define U(S,fi) as the expected value of fi obtained from picking S⊆E (irrespective of items’ states), i.e., U(S,fi)=EyE[fi(⋃e∈S(e,ye))]. One can verify that solving maxσU(σ,fi) is equivalent to solving maxS∈IU(S,fi).

Proof: First, according to the definition of f, for any i∈[m], we have

due to (12). Since due to Theorem 1, we have U(σ1/m,F)≥ϵ2α2mU(π∗,F). This finishes the proof of the first part of this theorem. The proof of time complexity is trivial since σ1/m calls APPROX m times. □

Discussion on the value of α

We next briefly discuss possible solutions to maxS∈IU(S,fi). Consider a special case when all reward functions in F are submodular, i.e., ϵ=1, and I is a family of subsets that satisfies a knapsack constraint or a matroid constraint calinescu2011maximizing , there exist algorithms that achieve 1−1/e approximation ratio, i.e., α=1−1/e. For more complicated constraints such as intersection of a fixed number of knapsack and matroid constraints, chekuri2014submodular provide approximate solutions via the multilinear relaxation and contention resolution schemes.

We next present a double-oracle based solution to ARONSS. We first introduce an optimization problem P.2 as follows.

In P.2, xS indicates the probability of picking S. It is easy to verify that finding argmaxσU(σ,F) is equivalent to solving P.2. In practice, P.2 is often solved by the double oracle algorithm mcmahan2003planning . Without loss of generality, assume that double oracle algorithm σDO finds a β approximate solution to P.2, i.e., U(σDO,F)≥βmaxσU(σ,F), we have U(σDO,F)≥ϵ2β2U(π∗,F) due to the adaptivity gap proved in Theorem 1.

As compared with σ1/m, we remove 1/m from the above approximation ratio, however, the time complexity of σDO could be exponential.

To the best of our knowledge, we are the first to systematically study the problem of adaptive robust optimization with nearly submodular structure. We analyze the adaptivity gap of ARONSS. Then we propose a approximate solution to this problem when all reward functions are submodular. Our algorithm achieves approximation ratio (1−1/e) when considering matroid constraint. At last, we develop two algorithms that achieve bounded approximation ratios for the general case.