We focus on the nonparametric density estimation problem with directional data. We propose a new rule for bandwidth selection for kernel density estimation. Our procedure is automatic, fully data-driven and adaptive to the smoothness degree of the density. We obtain an oracle inequality and optimal rates of convergence for the L2 error. Our theoretical results are illustrated with simulations. 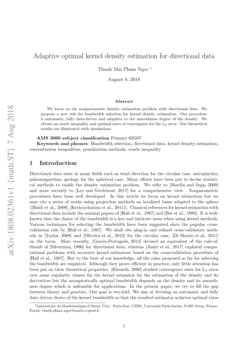 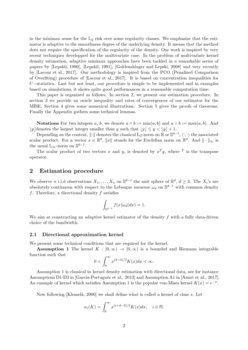 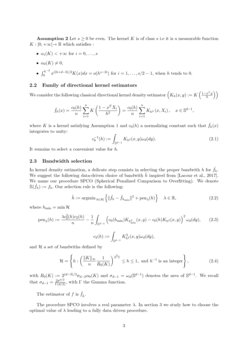 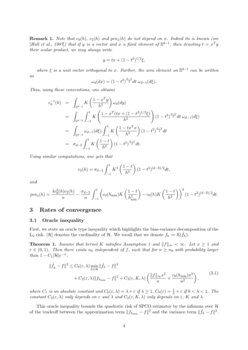 A two-class mixture model, where the density of one of the components is...
Gaelle Chagny, et al. ∙

We study the estimation, in Lp-norm, of density functions defined on [0,...
Karine Bertin, et al. ∙

While spherical data arises in many contexts, including in directional s...
Zhengwu Zhang, et al. ∙

β-Divergence loss for the kernel density estimation with bias reduced

Directional data arise in many fields such as wind direction for the circular case, astrophysics, paleomagnetism, geology for the spherical case. Many efforts have been put to devise statistical methods to tackle the density estimation problem. We refer to [Mardia and Jupp, 2000] and more recently to [Ley and Verdebout, 2017] for a comprehensive view. Nonparametric procedures have been well developed. In this article we focus on kernel estimation but we may cite a series of works using projection methods on localized bases adapted to the sphere ([Baldi et al., 2009], [Kerkyacharian et al., 2011]). Classical references for kernel estimation with directional data include the seminal papers of [Hall et al., 1987] and [Bai et al., 1988]. It is well-known that the choice of the bandwidth is a key and intricate issue when using kernel methods. Various techniques for selecting the bandwidth have been suggested since the popular cross-validation rule by [Hall et al., 1987]. We shall cite plug-in and refined cross-validatory methods in [Taylor, 2008] and [Oliveira et al., 2012] for the circular case, [Di Marzio et al., 2011] on the torus. More recently, [García-Portugués, 2013] devised an equivalent of the rule-of-thumb of [Silverman, 1986] for directional data, whereas [Amiri et al., 2017] explored computational problems with recursive kernel estimators based on the cross-validation procedure of [Hall et al., 1987]. But to the best of our knowledge, all the rules proposed so far for selecting the bandwidth are empirical. Although they prove efficient in practice, only little attention has been put on their theoretical properties. [Klemelä, 2000] studied convergence rates for L2 error over some regularity classes for the kernel estimator for the estimation of the density and its derivatives but the asymptotically optimal bandwidth depends on the density and its smoothness degree which is unfeasible for applications. In the present paper, we try to fill the gap between theory and practice. Our goal is two-fold. We aim at devising an automatic and fully data driven choice of the kernel bandwidth so that the resulted estimator achieves optimal rates in the minimax sense for the L2 risk over some regularity classes. We emphasize that the estimator is adaptive to the smoothness degree of the underlying density. It means that the method does not require the specification of the regularity of the density. Our work is inspired by very recent techniques developped for the multivariate case. In the problem of multivariate kernel density estimation, adaptive minimax approaches have been tackled in a remarkable series of papers by [Lepskiĭ, 1990], [Lepskiĭ, 1991], [Goldenshluger and Lepski, 2008] and very recently by [Lacour et al., 2017]. Our methodology is inspired from the PCO (Penalized Comparison of Overfiting) procedure of [Lacour et al., 2017]. It is based on concentration inequalities for U−statistics. Last but not least, our procedure is simple to be implemented and in examples based on simulations, it shows quite good performances in a reasonable computation time.

This paper is organized as follows. In section 2, we present our estimation procedure. In section 3 we provide an oracle inequality and rates of convergences of our estimator for the MISE. Section 4 gives some numerical illustrations. Section 5 gives the proofs of theorems. Finally the Appendix gathers some technical lemmas.

Notations For two integers a, b, we denote a∧b:=min(a,b) and a∨b:=max(a,b). And ⌊y⌋denotes the largest integer smaller than y such that ⌊y⌋≤y<⌊y⌋+1.

the associated scalar product. For a vector

The scalar product of two vectors x and y, is denoted by xTy, where T is the transpose operator.

We observe n i.i.d observations X1,…,Xn on Sd−1 the unit sphere of Rd, d≥3. The Xi’s are absolutely continuous with respect to the Lebesgue measure ωd on Sd−1 with common density f. Therefore, a directional density f satisfies

We aim at constructing an adaptive kernel estimator of the density f with a fully data-driven choice of the bandwidth.

We present some technical conditions that are required for the kernel.

Assumption 1 The kernel K:[0,∞)→[0,∞) is a bounded and Riemann integrable function such that

Assumption 1 is classical in kernel density estimation with directional data, see for instance Assumptions D1-D3 in [García-Portugués et al., 2013] and Assumption A1 in [Amiri et al., 2017]. An example of kernel which satisfies Assumption 1 is the popular von-Mises kernel K(x)=e−x.

Now following [Klemelä, 2000] we shall define what is called a kernel of class s. Let

where K is a kernel satisfying Assumption 1 and c0(h) a normalizing constant such that ^fh(x) integrates to unity:

It remains to select a convenient value for h.

In kernel density estimation, a delicate step consists in selecting the proper bandwith h for ^fh. We suggest the following data-driven choice of bandwith ^h inspired from [Lacour et al., 2017]. We name our procedure SPCO (Spherical Penalized Comparison to Overfitting). We denote E(^fh):=fh. Our selection rule is the following:

and H a set of bandwiths defined by

The estimator of f is ^f^h.

The procedure SPCO involves a real parameter λ. In section 3 we study how to choose the optimal value of λ leading to a fully data driven procedure.

where ξ is a unit vector orthogonal to x. Further, the area element on Sd−1 can be written as

Thus, using these conventions, one obtains

Using similar computations, one gets that

First, we state an oracle type inequality which highlights the bias-variance decomposition of the

with probability larger than

The next theorem shows that we cannot choose λ too small (λ<0) at the risk of selecting a bandwidth close to hmin with high probability. This would lead to an overfitting estimator. To this purpose, we suppose

This assumption is quite mild. Indeed the variance of ^fh is of order c20(h)c2(h)n, thus this assumption means that the smallest bias is negligible with respect to the corresponding integrated variance. Last but not least, because c20(hmin)c2(hmin) is of order h1−dmin (see Lemme 3), this assumption amounts to

Theorem 2 invites us to discard λ<0. Now considering oracle inequality (3.6), λ=1 yields the minimal value of the leading constant C0(ε,λ)=λ+ε . Thus, the theory urges us to take the optimal value λ=1 in the SPCO procedure. Actually, we will see in the numerical section that the choice λ=1 is quite efficient.

3.2 Tuning-free estimator and rates of convergence

Results of Section 3.1 about the optimality of λ=1 enable us to devise our tuning-free estimator ^fˇh with bandwidth ˇh defined as follows

The following corollary of Theorem 1 states an oracle inequality satisfied by ^fˇh. It will be central to compute rates of convergence.

We now compute rates of convergence for the MISE (Mean Integrated Square Error) of our estimator ^fˇh over some smoothness classes. [Klemelä, 2000] defined suitable smoothness classes for the study of the MISE. In particular, theses regularity classes involve a concept of an ”average” of directional derivatives which was first defined in [Hall et al., 1987]. Let us recall the definition of these smoothness classes.

We now shall define the derivative of order s.

An application of the oracle inequality in Corollary 1 allows us to derive rates of convergence for the MISE of ^fˇh.

Consider a kernel K satisfying Assumption 1 and Assumption 2. For B>0, let us denote ~F2(s,B) the set of densities bounded by B and belonging to F2(s). Then we have

Theorem 3 shows that the estimator ^fˇh achieves the optimal rate of convergence in dimension d−1 (minimax rates for multivariate density estimation are studied in [Ibragimov and Khasminski, 1980], [Ibragimov and Khasminski, 1981], [Hasminskii and Ibragimov, 1990]). Furthermore, our statistical procedure is adaptive to the smoothness s. It means that it does not require the specification of s.

We investigate the numerical performances of our fully data-driven estimator ^fˇh defined in section 3.2 with simulations. We compare ^fˇh to the widely used cross-validation estimator and to the ”oracle” (that will be defined later on). We focus on the unit sphere S2 (i.e the case d=3).

with κ=2 and μ=(1,0,0)T. We recall that κ is the concentration parameter and μ the directional mean. We also estimate the mixture of two von-Mises Fisher densities, f2,vM:

with κ′=0.7 and μ′=(−1,0,0)T. Note that the smaller the concentration parameter is, the closer to the uniform density the von-Mises Fisher density is.

Now let us define what the ”oracle” ^fhoracle is. The bandwidth horacle is defined as

horacle can be viewed as the ”ideal” bandwidth since it uses the specification of the density of interest f which is here either f1,vM or f2,vM. Hence, the performances of ^fhoracle are used as a benchmark.

In the sequel we present detailed results for f1,vM, namely risk curves and graphic reconstructions and we compute MISE both for f1,vM and f2,vM. We use the von-Mises kernel K(x)=e−x.

Before presenting the performances of the various procedures, we shall remind that theoretical results of section 3.1 have shown that setting λ=1 in the SPCO algorithm was optimal. We would like to show how simulations actually support this conclusion. Indeed, Figure 2 displays the L2-risk of ^f^h in function of parameter λ. Figure 2 a/ shows a ”dimension jump” and that the minimal risk is reached in a stable zone around λ=1: negative values of λ lead to an overfitting estimator (hmin is chosen) with an explosion of the risk, whereas large values of λ make the risk increase again (see a zoom on Figure 2 b/). Next, we will realize that λ=1 yields quite good results.

In Lemma 4 of the Appendix, we clarify the expression (3.3) to be minimized to implement our estimator ^fˇh. We now recall the cross-validation criterion of [Hall et al., 1987]. Let

is an unbiased estimate of the MISE of

^fh. The cross-validation procedure to select the bandwidth h consists in minimizing CV2 with respect to h. We call this selected value hCV2.

In the rest of this section, SPCO will denote the estimation procedure related to ^fˇh. In Figure 3, for n=500 we plot as a function of h: Roracle:=∥^fh−f1,vM∥2−∥f1,vM∥2 for the oracle, RSPCO:=∥^fh−^fhmin∥2+pen(h) for SPCO and CV2(h) for cross-validation. We point out on each graphic the value of h that minimizes each quantity. In Figure 4, we plot in spherical coordinates, for n=500, the density f1,vM and density reconstructions for the oracle, SPCO and cross-validation. Eventually, in Tables 1 and 2, we compute MISE to estimate f1,vM and f2,vM for the oracle, SPCO and cross-validation for n=100 and n=500, over 100 Monte-Carlo runs.

When analyzing the results, SPCO shows quite satisfying performances. Indeed, SPCO is close to the oracle and is slightly better than cross-validation when looking at the MISE computations for both densities.

Before proving Theorem 1, we need several intermediate results. The first one is the following proposition which is the counterpart of Proposition 4.1 of [Lerasle et al., 2016] for Sd−1.

Assumption (12) amounts to check that