Temporal Difference learning or TD(λ) is a fundamental algorithm in the field of reinforcement learning. However, setting TD's λ parameter, which controls the timescale of TD updates, is generally left up to the practitioner. We formalize the λ selection problem as a bias-variance trade-off where the solution is the value of λ that leads to the smallest Mean Squared Value Error (MSVE). To solve this trade-off we suggest applying Leave-One-Trajectory-Out Cross-Validation (LOTO-CV) to search the space of λ values. Unfortunately, this approach is too computationally expensive for most practical applications. For Least Squares TD (LSTD) we show that LOTO-CV can be implemented efficiently to automatically tune λ and apply function optimization methods to efficiently search the space of λ values. The resulting algorithm, ALLSTD, is parameter free and our experiments demonstrate that ALLSTD is significantly computationally faster than the naïve LOTO-CV implementation while achieving similar performance. 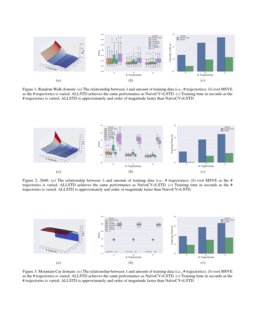 be a Markov Decision Process (MDP) where

S is a countable set of states, A is a finite set of actions, P(s′|s,a) maps each state-action pair (s,a)∈S×A

to the probability of transitioning to

s∈S to a scalar reward, and γ∈[0,1] is the discount factor. We assume we are given a function ϕ:S→Rd that maps each state to a d-dimensional vector, and we denote by X=ϕ(S) a d×|S| dimensional matrix with one column for each state s∈S.

Let π be a stochastic policy and denote by π(a|s) the probability that the policy executes action a∈A from state s∈S. Given a policy π, we can define the value function

row is the probability distribution over next states, given that the agent is in state

Given that X⊤θ≈νπ, we have that

where Z is a d×|S| matrix, which implies that A is a d×d matrix and b is a d dimensional vector. Given n≥1 trajectories with length H111For clarity, we assume all trajectories have the same fixed length. The algorithms presented can easily be extended to handle variable length trajectories., this suggests the LSTD(λ) algorithm [Bradtke and Barto, 1996, Boyan, 2002], which estimates

We will drop the subscript λ when it is clear from context. The computational complexity of LSTD(λ) is O(d3+nHd2), where the O(d3) term is due to solving for the inverse of Aλ and the O(nHd2) term is the cost associated with building the A matrix. We can further reduce the total computational complexity to O(nHd2) by using Recursive LSTD(λ) [Xu et al., 2002], which we will refer to as RLSTD(λ). Instead of computing Aλ and solving for its inverse, RLSTD(λ) recursively updates an estimate ^A−1λ of A−1λ using the Sherman-Morrison formula [Sherman and Morrison, 1949].

is an invertable matrix and

u,v are column vectors such that 1+v⊤M−1u≠0, then the Sherman-Morrison formula is given by

In the remainder of this paper, we focus on LSTD rather than RLSTD for (a) clarity, (b) because RLSTD has an additional initial variance parameter, and (c) because LSTD gives exact least squares solutions (while RLSTD’s solution is approximate). Note, however, that similar approaches and analysis can be applied to RLSTD.

Adapting the Timescale of LSTD

The parameter λ effectively controls the timescale at which updates are performed. This induces a bias-variance trade-off, because longer timescales (λ close to 1) tend to result in high variance, while shorter timescales (λ close to 0) introduce bias. In this paper, the solution to this trade-off is the value of λ∈Λ⊆[0,1] that produces the parameters θλ that minimize Mean Squared Value Error (MSVE)

where μ(s) is a distribution over states.

If Λ is a finite set, a natural choice is to perform Leave-One-Out (LOO) Cross-Validation (CV) to select the λ∈Λ

that minimizes the MSE. Unlike the typical supervised learning setting, individual sampled transitions are correlated. So the LOO-CV errors are potentially biased. However, since trajectories are independent, we propose the use of Leave-One-Trajectory-Out (LOTO) CV.

where θ(i) is the LSTD(λ) solution computed without the ith trajectory.

The LOTO-CV error for the ith trajectory is defined by

Since θ(i)=C−1(i)y(i), it is sufficient to derive C−1(i) and y(i). Notice that C(i)=A−H∑t=1zi,t(xi,t−γxi,t+1)⊤ and y(i)=b−H∑t=1zi,tri,t. After deriving A and b via (4) and (5), respectively, we can derive y(i) straightforwardly in O(Hd) time. However, deriving C−1(i) must be done more carefully. We first derive A−1 and then update this matrix recursively using the Sherman-Morrison formula to remove each transition sample from the ith trajectory.

which gives ˜C−1H=C−1(i). Since the Sherman-Morison formula can be applied in O(d2) time, erasing the effect of all H samples for the ith trajectory can be done in O(Hd2) time.

Using this approach the cost of LSTD(λ) + LOTO-CV is O(d3+nHd2), which is on the same order as running LSTD(λ) alone. So computing the additional LOTO-CV errors is practically free.

We combine the approaches from the previous two subsections to define Adaptive λ Least-Squares Temporal Difference learning (ALLSTD). The pseudo-code is given in Algorithm 3. ALLSTD takes as input a set of n≥2 trajectories and a finite set of values Λ in [0,1]. Λ is the set of candidate λ values.

(Agnostic Consistency) Let Λ⊆[0,1], Dn be a dataset of n≥2 trajectories generated by following the policy π in an MDP M with initial state distribution μ0. If 1∈Λ, then as n→∞,

Theorem 2 says that in the limit ALLSTD converges to the best hypothesis. The proof of Theorem 2 is given in the appendix.

We compared the MSVE and computation time of ALLSTD against a naïve implementation of LOTO-CV (which we refer to as NaïveCV+LSTD) in three domains: random walk, 2048, and Mountain Car. As a baseline, we compared these algorithms to LSTD and RLSTD with the best and worst fixed choices of λ in hindsight, which we denote LSTD(best), LSTD(worst), RLSTD(best), and RLSTD(worst). In all of our experiments, we generated 80 independent trials. In the random walk and 2048 domains we set the discount factor to γ=0.95. For the mountain car domain we set the discount factor to γ=1.

The random walk domain [Sutton and Barto, 1998] is a chain of five states organized from left to right. The agent always starts in the middle state and can move left or right at each state except for the leftmost and rightmost states, which are absorbing. The agent receives a reward of 0 unless it enters the rightmost state where it receives a reward of +1 and the episode terminates.

Policy: The policy used to generate the trajectories was the uniform random policy over two actions: left and right. Features: Each state was encoded using a 1-hot representation in a 5-dimensional feature vector. Thus, the value function was exactly representable.

Figure 1a shows the root MSVE as a function of λ and # trajectories. Notice that λ<1 results in lower error, but the difference between λ<1 and λ=1 decreases as the # trajectories grows.

Figure 1c compares the average execution time of each algorithm in seconds (on a log scale). k× LSTD and k× RLSTD are simply the time required to compute LSTD and RLSTD for k different λ values, respectively. They are shown for reference and do not actually make a decision about which λ value to use. ALLSTD is significantly faster than NaïveALLSTD and takes roughly the same computational time as solving LSTD for k different λ values.

2048 is a game played on a 4×4 board of tiles. Tiles are either empty or assigned a positive number. Tiles with larger numbers can be acquired by merging tiles with the same number. The immediate reward is the sum of merged tile numbers.

Policy: The policy used to generate trajectories was a uniform random policy over the four actions: up, down, left, and right. Features: Each state was represented by a 16-dimensional vector where the value was taken as the value of the corresponding tile and 0 was used as the value for empty tiles. This linear space was not rich enough to capture the true value function.

Figure 2a shows the root MSVE as a function of λ and # trajectories. Similar to the random walk domain, λ<1 results in lower error.

Figure 2c compares the average execution time of each algorithm in seconds (on a log scale). Again, ALLSTD is significantly faster than NaïveALLSTD.

The mountain car domain [Sutton and Barto, 1998] requires moving a car back and forth to build up enough speed to drive to the top of a hill. There are three actions: forward, neutral, and reverse.

Policy: The policy generate the data sampled one of the three actions with uniform probability 25% of the time. On the remaining 75% of the time the forward action was selected if

Figure 3a shows the root MSVE as a function of λ and # trajectories. Unlike the previous two domains, λ=1 achieves the smallest error even with a small # trajectories. This difference is likely because of the poor feature representation used, which favors the Monte-Carlo return [Bertsekas and Tsitsiklis, 1996, Tagorti and Scherrer, 2015].

Figure 3b compares the root MSVE in the mountain car domain. Because of the poor feature representation, the difference between LSTD(best) and LSTD(worst) is large. ALLSTD and NaïveALLSTD again achieve roughly the same performance as LSTD(best) and RLSTD(best).

Figure 3c shows that average execution time for ALLSTD is significantly shorter than for NaïveALLSTD.

We have introduced ALLSTD to efficiently select λ to minimize root MSVE in a data-driven way. The most similar approach to ALLSTD is found in the work of Downey2010, which introduces a Bayesian model averaging approach to update λ. However, this approach is not comparable to ALLSTD because it is not clear how it can be extended to domains where function approximation is required to estimate the value.

White2016 introduce the λ-greedy algorithm for adapting λ per-state based on estimating the bias and variance. However, an approximation of the bias and variance is needed for each state to apply λ-greedy. Approximating these values accurately is equivalent to solving our original policy evaluation problem, and the approach suggested in the work of White2016 introduces several additional parameters. ALLSTD, on the other hand, is a parameter free algorithm. Furthermore, none of these previous approaches suggest using LOTO-CV to tune λ or show how LOTO-CV can be efficiently implemented under the LSTD family of algorithms.

While we have focused on on-policy evaluation, the bias-variance trade-off controlled by λ is even more extreme in off-policy evaluation problems. Thus, an interesting area of future work would be applying ALLSTD to off-policy evaluation [White and White, 2016, Thomas and Brunskill, 2016]. It may be possible to identify good values of λ without evaluating all trajectories. A bandit-like algorithm could be applied to determine how many trajectories to use to evaluate different values of λ. It is also interesting to note that our efficient cross-validation trick could be used to tune other parameters, such as a parameter controlling L2 regularization.

Appendix A Agnostic Consistency of ALLSTD

(Agnostic Consistency) Let Λ⊆[0,1], Dn be a dataset of n≥2 trajectories generated by following the policy π in an MDP M with initial state distribution μ0. If 1∈Λ, then as n→∞,

Theorem 2 says that in the limit ALLSTD converges to the best hypothesis.

ALLSTD essentially executes LOTO-CV+LSTD(λ) for |Λ| parameter values and compares the scores returned. Then it returns the LSTD(λ) solution for the λ value with the lowest score. So it is sufficient to show that

The first follows by an application of the law of large numbers. Since each trajectory is independent, the MSVE for each

λ will converge almost surelyto the expected MSVE. The second follows from the fact that LSTD(λ=1

) is equivalent to linear regression against the Monte-Carlo returns