While standard estimation assumes that all datapoints are from probability distribution of the same fixed parameters θ, we will focus on maximum likelihood (ML) adaptive estimation for nonstationary time series: separately estimating parameters θ_T for each time T based on the earlier values (x_t)_t<T using (exponential) moving ML estimator θ_T=max_θ l_T for l_T=∑_t<Tη^T-tln(ρ_θ (x_t)) and some η∈(0,1]. Computational cost of such moving estimator is generally much higher as we need to optimize log-likelihood multiple times, however, in many cases it can be made inexpensive thanks to dependencies. We focus on such example: exponential power distribution (EPD) ρ(x)∝(-|(x-μ)/σ|^κ/κ) family, which covers wide range of tail behavior like Gaussian (κ=2) or Laplace (κ=1) distribution. It is also convenient for such adaptive estimation of scale parameter σ as its standard ML estimation is σ^κ being average x-μ^κ. By just replacing average with exponential moving average: (σ_T+1)^κ=η(σ_T)^κ +(1-η)|x_T-μ|^κ we can inexpensively make it adaptive. It is tested on daily log-return series for DJIA companies, leading to essentially better log-likelihoods than standard (static) estimation, surprisingly with optimal κ tails types varying between companies. Presented general alternative estimation philosophy provides tools which might be useful for building better models for analysis of nonstationary time-series. 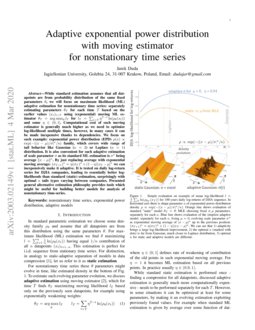 In standard parametric estimation we choose some density family ρθ and assume that all datapoints are from this distribution using the same parameters θ. For maximum likelihood (ML) estimation we find θ maximizing l=∑nt=11nln(ρθ(xt)) having equal 1/n contribution of all n datapoints (xt)t=1..n. This estimation is perfect for i.i.d. sequence from stationary time series. For distinction, in analogy to static-adaptive separation of models in data compression [1], let us refer to it as static estimation.

For nonstationary time series these θ parameters might evolve in time, like estimated density in the bottom of Fig. 1. To estimate such evolving parameter evolution, we discuss adaptive estimation using moving estimator [2], which for time T finds θT maximizing moving likelihood lT based only on the previously seen datapoints, for example using exponentially weakening weights:

where η∈(0,1] defines rate of weakening of contribution of the old points in such exponential moving average. For η=1 it becomes ML estimation based on all previous points. In practice usually η∈(0.9,1).

While standard static estimation is performed once - finding a compromise for all datapoints, discussed adaptive estimation is generally much more computationally expensive - needs to be performed separately for each T. However, in some situations it can be optimized at least for some parameters, by making it an evolving estimation exploiting previously found values. For example when standard ML estimation is given by average over some function of datapoints, we can transform it to adaptive estimation by just replacing this average with exponential moving average.

Specifically, we will focus on exponential power distribution (EPD) [3] family: ρ(x)∝exp(−|(x−μ)/σ|κ/κ), which covers wide range of tail behaviors like Gaussian (κ=2) or Laplace (κ=1) distribution. It is also convenient for such adaptive estimation of scale parameter σ as in standard ML estimation: σκ is average of |xt−μ|κ. We can transform it to adaptive estimation by just replacing average with exponential moving average: (σT+1)κ=η(σT)κ+(1−η)|xT−μ|κ.

On example of 100 years Dow Jones Industrial Average (DJIA) daily log-returns and 10 years for 29 its recent companies, we have tested that such adaptive estimation of σ leads to essentially better log-likelihoods than standard static estimation as we can see in Fig. 1, 2. Surprisingly, the κ parameter defining tail behavior, usually just chosen as κ=2 by assuming Gaussian distribution, turns out less universal - various companies have different optimal κ, much closer to heavier tail κ=1 of Laplace distribution.

The discussed general philosophy of adaptive estimation directly focuses on non-stationarity of time series - trying to model evolution of parameters. Its tools like adaptive EPD can be used as a building block for the proper methods like ARIMA-GARCH family. Surprisingly, such adaptive EPD σ estimation (just (σT+1)κ=η(σT)κ+(1−η)|xT−μ|κ) for this data already turns out comparable with much more sophisticated standard methods like GARCH(1,1) [4], represented as red lines in Fig. 2

Fκμσ(x)=∫x−∞ρκμσ(y)dy) of EPD are correspondingly:

where Γ is Euler gamma function, γ(a,z)=Γ(a,z)/Γ(a) is regularized incomplete gamma function. This PDF and CDF is visualized in Fig. 3.

Such general weighted log-likelihood is:

There is no general analytic formula for the remaining parameters, but they can be estimated numerically. Estimation of the location μ can be expressed as:

for Gaussian distribution (κ=2) it is just mean of values ^μ=1n∑iwixi. For Laplace distribution (κ=1) it is their median. Some practical approximation, e.g. as initial value of more sophisticated estimation, might be just using mean for all κ.

, we can for example use the method of moments, especially that variance of EPD has simple form:

which is strongly decreasing with κ, e.g. 2σ2 for Laplace distribution, σ2 for Gaussian distribution.

to get (exponential moving) weights summing to 1.

which is exponential moving average (EMA), can be evolved iteratively:

initial b1=(^σ1)κ has to be chosen arbitrarily.

We have transformed static estimator given by average, into adaptive estimator by just replacing average with exponential moving average. Observe that it can be analogously done for any estimator of ^θ=f(∑iwig(xi)) form.

To generalize the above, assume that estimation of parameter θ is analogously given by average (∑iwi=1):

Generally we analogously have ^θT=f(bT) adaptation for

allowing to imagine evolution of b as random walk with step from ¯η(g(X)−b)random variable, which can evolve in time here. Generally ¯η=1−η is proportional to speed of this random walk.

We leave its details for future work as improvement by optimization from the fixed η=0.94 was practically negligible for the analyzed daily log-return data. Fig. 2 presents such difference by green plot for η=0.94, and blue for individually optimized η.

While in practice the most important is adaptation of scale parameter σ, there might be also worth to consider adaptation of the remaining parameters. Their estimation rather does not have analytical formulas already in static case, hence for adaptive case we should look for practical approximations, preferably also based on EMA for inexpensive updating.

Location μ is mean of such parametric distribution, just using mean of datapoints is optimal for κ=2 Gaussian distribution case, and can be easily transformed to adaptive estimation. Hence a natural approximation of such estimation is analogous:

Another general approach are gradient methods, adapting chosen parameter(s) e.g. to increase contribution to log-likelihood. For example for some tiny ϵ>0:

We will now look at evaluation of these methodologies from perspective of 100 years daily Dow Jones index111Source of DJIA time series: http://www.idvbook.com/teaching-aid/data-sets/the-dow-jones-industrial-average-data-set/, values v, working on xt=ln(vt+1)−ln(vt) log-returns sequence for t=1,…,n for n=29354, summarized in Fig. 1.

As evaluation there is used mean log-likelihood: l=1n∑nt=1ln(ρt(xt)), where in static setting ρt has constant parameters chosen by MLE, in adaptive these parameters evolve in time: are estimated based on previous values.

In adaptive settings there was arbitrarily chosen σ1=0.01, μ1=0, and from numerical search: η=0.94, ν=0.997. Here are the obtained parameters and mean log-likelihoods for various settings:

We can see that standard assumption of static Gaussian can be essentially improved both by going to closer to Laplace distribution, and by switching to adaptive estimation of scale parameter b. Additional adaptive estimation of μ location provides some tiny further improvement here. The final used evolution of σ and μ is presented in Fig. 4.

There were also trials for adapting κ, but were not able to provide a noticeable improvement here.

The estimated parametric distributions of variables in separate times often leave statistical dependencies which can be further exploited.

For this purpose, we can use the best found model, here EPD κ=1.15 with adaptive σ and μ

for DJIA sequence, and use it for normalization of variables to nearly uniform distributions by going through cumulative distribution functions (CDF) of estimated parametric distributions: transform to

We can then take e.g. d neighboring values of {y} sequence, which should be approximately from uniform distribution on [0,1]d. In Hierarchical Correlation Reconstruction [6] we estimate distortion from this uniform distribution as a polynomial of modelled static or adaptive coefficients.

This article is focused only on a basic technique, in practice it can be further improved by combining with complementing methods, like mentioned in Section III-A additional modelling of joint distribution for variables normalized with CDF of distributions discussed here.

While discussed adaptive estimation of scale parameter σ is MLE-optimal, the remaining parameters rather require some approximations - worth further exploration of better approaches.

Another open question is finding better ways for choosing rate of exponential moving average, also varying in time to include changing rate of forgetting e.g. due to varying time differences.

In contrast e.g. to Levy/stable distributions, the discussed EPD does not cover heavy tails (1/polynomial density), or asymmetry - it is worth to search for practical transformations also of other types of parametric distributions into adaptive estimation.

Prepend inserts initial values in the beginning, then [[1;;-2]] removes the last value, so the used density parameter is modeled based only on history: