In this paper, we consider the problem of detecting the presence (or absence) of an unknown but structured signal from the space-time outputs of an array under strong, non-white interference. Our motivation is the detection of a communication signal in jamming, where often the training portion is known but the data portion is not. We assume that the measurements are corrupted by additive white Gaussian noise of unknown variance and a few strong interferers, whose number, powers, and array responses are unknown. We also assume the desired signals array response is unknown. To address the detection problem, we propose several GLRT-based detection schemes that employ a probabilistic signal model and use the EM algorithm for likelihood maximization. Numerical experiments are presented to assess the performance of the proposed schemes. 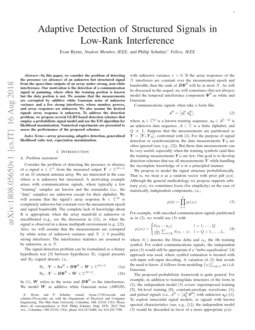 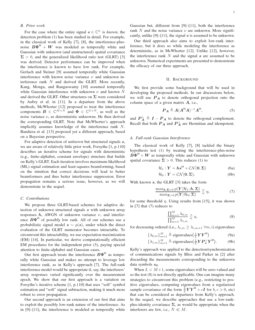 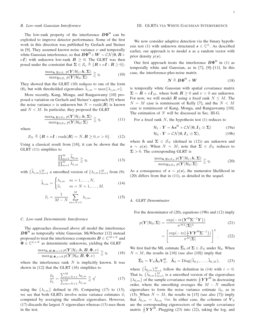 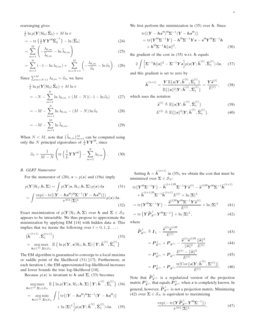 Consider the problem of detecting the presence or absence of a signal s∈CL from the measured output Y∈CM×L of an M-element antenna array. We are interested in the case where s is unknown but structured. A motivating example arises with communications signals, where typically a few “training” symbols are known and the remaining “data” symbols are unknown, apart from their alphabet. We will assume that the signal’s array response h∈CM

is completely unknown but constant over the measurement epoch and signal bandwidth. The complete lack of knowledge about

h is appropriate when the array manifold is unknown or uncalibrated (e.g., see the discussion in [1]), or when the signal is observed in a dense multipath environment (e.g., [2]

). Also, we will assume that the measurements are corrupted by white noise of unknown variance and

N≥0 possibly strong interferers. The interference statistics are assumed to be unknown, as is N.

The signal-detection problem can be formulated as a binary hypothesis test [3] between hypotheses H1 (signal present) and H0 (signal absent), i.e.,

In (1), W refers to the noise and BΦ{H} to the interference. We model W as white Gaussian noise (WGN)111By white Gaussian, we mean that W has i.i.d. zero-mean circularly symmetric complex Gaussian entries. with unknown variance ν>0. If the array responses of the N interferers are constant over the measurement epoch and bandwidth, then the rank of BΦ{H} will be at most N. As will be discussed in the sequel, we will sometimes (but not always) model the temporal interference component Φ{H} as white and Gaussian.

We propose to model the signal structure probabilistically. That is, we treat s

as a random vector with prior pdf

For example, with uncoded communication signals partitioned as in (2), we would use (3) with

where δ(⋅) denotes the Dirac delta, st,l the lth training symbol, Al is a finite-cardinality set containing the lth data symbol, and |Al| is the cardinality of Al. For coded communications signals, the independent prior (3) would still be appropriate if a “turbo equalization” [4]

approach was used, where symbol estimation is iterated with soft-input soft-input decoding. A variation of (

2) that avoids the need to know A follows from modeling {sl}Ll=Q+1 as i.i.d. Gaussian. In practical communications scenarios, there exists imperfect time and frequency synchronization, which leads to mismatch in the assumed model (3)-(4). In Sec. V, we discuss synchronization mismatch and investigate its effect in numerical experiments.

The proposed probabilistic framework is quite general. For example, in addition to training/data structures of the form in (2), the independent model (3) covers superimposed training [5], bit-level training [6], constant-envelope waveforms [1], and pulsed signals (i.e., s{H}=[s% {H}{p}0{H}] with unknown s{p}) [1]. To exploit sinusoidal signal models, or signals with known spectral characteristics (see, e.g., [1]), the independent model (3) would be discarded in favor of a more appropriate p(s). There is an excellent description of most of these topics in [1], and we refer readers to that source for more details.

For the case where the entire signal s∈CL is known, the detection problem (1) has been studied in detail. For example, in the classical work of Kelly [7, 8], the interference-plus-noise BΦ{H}+W was modeled as temporally white222By temporally white and Gaussian, we mean that the columns are i.i.d. circularly symmetric complex Gaussian random vectors with zero mean and a generic covariance matrix. and Gaussian with unknown (and unstructured) spatial covariance Σ>0, and the generalized likelihood ratio test (GLRT) [3] was derived. Detector performance can be improved when the interference is known to have low rank. For example, Gerlach and Steiner [9] assumed temporally white Gaussian interference with known noise variance ν and unknown interference rank N and derived the GLRT. More recently, Kang, Monga, and Rangaswamy [10] assumed temporally white Gaussian interference with unknown ν and known N and derived the GLRT. Other structures on Σ were considered by Aubry et al. in [11]. In a departure from the above methods, McWhorter [12] proposed to treat the interference components B∈CM×N and Φ∈CL×N, as well as the noise variance ν, as deterministic unknowns. He then derived the corresponding GLRT. Note that McWhorter’s approach implicitly assumes knowledge of the interference rank N. Bandiera et al. [13] proposed yet a different approach, based on a Bayesian perspective.

For adaptive detection of unknown but structured signals s, we are aware of relatively little prior work. Forsythe [1, p.110] describes an iterative scheme for signals with deterministic (e.g., finite-alphabet, constant envelope) structure that builds on Kelly’s GLRT. Each iteration involves maximum-likelihood (ML) signal estimation and least-squares beamforming, based on the intuition that correct decisions will lead to better beamformers and thus better interference suppression. Error propagation remains a serious issue, however, as we will demonstrate in the sequel.

We propose three GLRT-based schemes for adaptive detection of unknown structured signals s with unknown array responses h, additive WGN of unknown variance ν, and interference BΦ{H} of possibly low rank. All of our schemes use a probabilistic signal model s∼p(s), under which the direct evaluation of the GLRT numerator becomes intractable. To circumvent this intractability, we use expectation maximization (EM) [14]. In particular, we derive computationally efficient EM procedures for the independent prior (3), paying special attention to finite-alphabet and Gaussian cases.

Our first approach treats the interference BΦ{H} as temporally white\footnotesize??? and Gaussian, and it makes no attempt to leverage low interference rank, similar to Kelly’s approach [7]. A full-rank interference model would be appropriate if, say, the interferers’ array responses varied significantly over the measurement epoch. We show that our first approach is a variation on Forsythe’s iterative scheme [1, p.110] that uses “soft” symbol estimation and “soft” signal subtraction, making it much more robust to error propagation.

Our third approach also aims to exploit low-rank interference, but it does so while modeling the interference as deterministic, as in McWhorter [12]. Unlike [12], however, the interference rank N and the signal s are assumed to be unknown. Numerical experiments are presented to demonstrate the efficacy of our three approaches.

We first provide some background that will be used in developing the proposed methods. In our discussions below, we will use PA to denote orthogonal projection onto the column space of a given matrix A, i.e.,

and P⊥A≜I−PA to denote the orthogonal complement. Recall that both PA and P⊥A are Hermitian and idempotent.

The classical work of Kelly [7, 8] tackled the binary hypothesis test (1) by treating the interference-plus-noise N≜BΦ{H}+W as temporally white and Gaussian with unknown M×M spatial covariance matrix Σ>0. This reduces (1) to

where vec(N) denotes the vector formed by concatenating all columns of the matrix N, CN(μ,C)

μ and covariance matrix C, and ⊗ denotes the Kronecker product. We note that the covariance structure IL⊗Σ in (6) corresponds temporal whiteness across L time samples and spatial correlation with covariance matrix Σ. With known s, the GLRT [3] takes the form

Kelly’s approach was applied to the detection/synchronization of communications signals by Bliss and Parker in [2] after discarding the measurements corresponding to the unknown data symbols s{d}.

When L<M+1, some eigenvalues will be zero-valued and so the test (8) is not directly applicable. One can imagine many strategies to circumvent this problem (e.g., restricting to positive eigenvalues, computing eigenvalues from a regularized sample covariance of the form bLYY{H}+cI for b,c>0, etc) that can be considered as departures from Kelly’s approach. In the sequel, we describe approaches that use a low-rank-plus-identity covariance Σ, as would be appropriate when the interferers are few, i.e., N≪M.

The low-rank property of the interference BΦ{H} can be exploited to improve detector performance. Some of the first work in this direction was published by Gerlach and Steiner in [9]. They assumed known noise variance ν and temporally white Gaussian interference, so that where Σ=R+νIM with unknown low-rank R≥0. The GLRT was then posed under the constraint that Σ∈Sν≜{R+νI:R≥0}:

They showed that the GLRT (10) reduces to one of the form (8), but with thresholded eigenvalues ˜λi,m=max{λi,m,ν}.

More recently, Kang, Monga, and Rangaswamy [10] proposed a variation on Gerlach and Steiner’s approach [9] where the noise variance ν is unknown but N=rank(R) is known, N<M, and N≤L. In particular, they proposed the GLRT

Using a classical result from [16], it can be shown that the GLRT (11) simplifies to

The approaches discussed above all model the interference BΦ{H} as temporally white Gaussian. McWhorter [12] instead proposed to treat the interference components B∈CM×N and Φ∈CL×N as deterministic unknowns, yielding the GLRT

where the interference rank N is implicitly known. It was shown in [12] that the GLRT (16) simplifies to

using the {λi,m} defined in (9). Comparing (17) to (13), we see that both GLRTs involve noise variance estimates ˆνi computed by averaging the smallest eigenvalues. However, (17) discards the largest N eigenvalues whereas (13) uses them in the test.

We now consider adaptive detection via the binary hypothesis test (1) with unknown structured s∈CL. As described earlier, our approach is to model s as a random vector with prior density p(s).

For a fixed rank N, the hypothesis test (1) reduces to

As a consequence of s∼p(s), the numerator likelihood in (20) differs from that in (11), as detailed in the sequel.

are the corresponding eigenvectors of the sample covariance matrix

When N<M, note that {ˆλ0,m}Mm=1 can be computed using only the N principal eigenvalues of 1LYY{H}, since

Exact maximization of p(Y|H1;h,Σ) over h and Σ∈SN appears to be intractable. We thus propose to approximate the maximization by applying EM [14] with hidden data s. This implies that we iterate the following over t=0,1,2,…:

The EM algorithm is guaranteed to converge to a local maxima or saddle point of the likelihood (LABEL:eq:pY1aa) [17]. Furthermore, at each iteration t, the EM-approximated log-likelihood increases and lower bounds the true log-likelihood [18].

Because s is statistically independent of h and Σ, we have lnp(Y,s|H1;h,Σ)=lnp(Y|s,H1;h,Σ)+lnp(s), which allows us to rewrite (LABEL:eq:EMa) as

We first perform the minimization in (35) over h. Since

and this gradient is set to zero by

which uses the notation

We have thus derived the EM procedure that iteratively lower bounds [18] the numerator of (20) under a generic signal prior p(s).

Iii-C EM Update under an Independent Prior

The EM updates of ^s(t) and E(t) in (39)-(40) compute the conditional mean (or, equivalently, the MMSE estimate [3]) of s and ∥s∥2, respectively, given the measurements Y in (19) under the model h=^h(t) and Σ=^Σ(t)1. For any independent prior, as in (3), we can MMSE-estimate the symbols one at a time from the measurement equation

From yl, we obtain a sufficient statistic [3] for the estimation of sl by spatially whitening the measurements via

and then matched filtering via

which is a Gaussian-noise-corrupted version of the true symbol sl, with noise precision ξ(t).

The computation of the MMSE estimate ˆsl from r(t)l depends on the prior p(sl). For the Gaussian prior p(sl)=CN(sl;μl,vl), we have the posterior mean and variance [3]

and prior symbol probabilities

ωlk≥0 (such that ∑Klk=1ωlk=1 ∀l), it is straightforward to show that the posterior density is

and thus the posterior mean and second moment are

This EM update procedure is summarized in Alg. 1.

The implementation complexity of Alg. 1 is dominated by the eigenvalue decomposition in line 12, which consumes O(M3) operations per EM iteration. We now describe how the complexity of this step can be reduced. Recall that