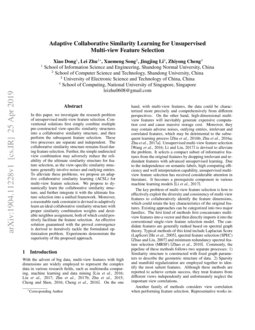 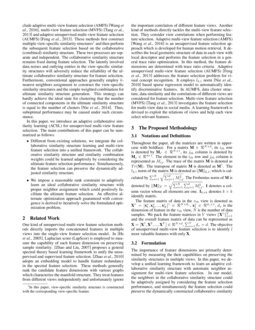 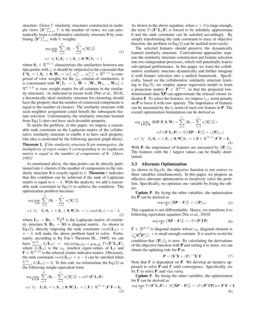 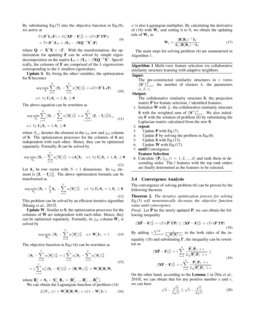 With the advent of big data, multi-view features with high dimensions are widely employed to represent the complex data in various research fields, such as multimedia computing, machine learning and data mining

is devised to alleviate the problem. It selects a compact subset of informative features from the original features by dropping irrelevant and redundant features with advanced unsupervised learning. Due to the independence on semantic labels, high computing efficiency and well interpretation capability, unsupervised multi-view feature selection has received considerable attention in literature. It becomes a prerequisite component in various machine learning models

The key problem of multi-view feature selection is how to effectively exploit the diversity and consistency of multi-view features to collaboratively identify the feature dimensions, which could retain the key characteristics of the original features. Existing approaches can be categorized into two major families. The first kind of methods first concatenates multi-view features into a vector and then directly imports it into the conventional single-view feature selection model. The candidate features are generally ranked based on spectral graph theory. Typical methods of this kind include Laplacian Score (LapScor)

[He et al.2005], spectral feature selection (SPEC) [Zhao and Liu2007] and minimum redundancy spectral feature selection (MRSF) [Zhao et al.2010]. Commonly, the pipeline of these methods follows two separate processes: 1) Similarity structure is constructed with fixed graph parameters to describe the geometric structure of data. 2) Sparsity and manifold regularization are employed together to identify the most salient features. Although these methods are reported to achieve certain success, they treat features from different views independently and unfortunately neglect the important view correlations.

In this paper, we introduce an adaptive collaborative similarity learning (ACSL) for unsupervised multi-view feature selection. The main contributions of this paper can be summarized as follows:

To tackle the problem, in this paper, we impose a reasonable rank constraint on the Laplacian matrix of the collaborative similarity structure to enable it to have such property. Our idea is motivated by the following spectral graph theory.

If the similarity structure S are nonnegative, the multiplicity of eigen-values 0 corresponding to its Laplacain matrix is equal to the number of components of S. [Alavi1991]

As mentioned above, the data points can be directly partitioned into k clusters if the number of components in the similarity structure S is exactly equal to k. Theorem 1 indicates that this condition can be achieved if the rank of Laplacian matrix is equal to n−k. With the analysis, we add a reasonable rank constraint in Eq.(1) to achieve the condition. The optimization problem becomes

where LS=DS−ST+S2 is the Laplacain matrix of similarity structure S, DS=S1 is diagonal matrix. As shown in Eq.(2), directly imposing the rank constraint rank(LS)=n−k will make the above problem hard to solve. Fortunately, according to Ky Fan’s Theorem [K.1949], we can have ∑ki=1δi(LS)=argminF∈Rn×k,FTF=IkTr(FTLSF), where δi(LS) is the ith smallest eigen-values of LS and F∈RN×k is the relaxed cluster indicator matrix. Obviously, the rank constraint rank(LS)=n−k can be satisfied when ∑ki=1δi(LS)=0. To this end, we reformulate the Eq.(2) as the following simple equivalent form

As shown in the above equation, when α>0 is large enough, the term Tr(FTLSF) is forced to be infinitely approximate 0 and the rank constraint can be satisfied accordingly. By simply transforming the rank constraint to trace in objective function, the problem in Eq.(2) can be tackled more easily.

The selected features should preserve the dynamically learned similarity structure. Conventional approaches separate the similarity structure construction and feature selection into two independent processes, which will potentially lead to sub-optimal performance. In this paper, we learn the collaborative similarity structure dynamically and further integrate it with feature selection into a unified framework. Specifically, based on the collaborative similarity structure learning in Eq.(3), we employ sparse regression model to learn a projection matrix P∈Rd×k, so that the projected low-dimensional data XP can approximate the relaxed cluster indicator F. To select the features, we impose l2,1 norm penalty on P to force it with row sparsity. The importance of features can be measured by the l2 norm of each row feature in P. The overall optimization formulation can be derived as

With P, the importance of features are measured by ||Pi′||2. The features with the l largest values can be finally determined.

As shown in Eq.(4), the objective function is not convex to three variables simultaneously. In this paper, we propose an effective alternate optimization to iteratively solve the problem. Specifically, we optimize one variable by fixing the others.

Update P. By fixing the other variables, the optimization for P can be derived as

This equation is not differentiable. Hence, we transform it to following equivalent equation [Nie et al.2010]

Γ∈Rd×d is diagonal matrix whose ith diagonal element is 12√Pi′PTi′+ϵ. ϵ is small enough constant. It is used to avoid the condition that ||Pi′||2 is zero. By calculating the derivations of the objective function with P and setting it to zeros, we can obtain the updating rule for P as

Note that Γ is dependent on P. We develop an iterative approach to solve P and Γ until convergence. Specifically, we fix Γ to solve P, and vice versa.

Update F. By fixing the other variables, the optimization for F can be derived as

By substituting Eq.(7) into the objective function in Eq.(8), we arrive at

where Q=XTX+γΓ. With the transformation, the optimization for updating F can be solved by simple eigen-decomposition on the matrix LS+βIN−βXQ−1XT. Specifically, the columns of F are comprised of the keigenvectors corresponding to the k

Update S. By fixing the other variables, the optimization for S becomes

The above equation can be rewritten as

where Si,j denotes the element in the ith row and jth column of S. The optimization processes for the columns of S are independent with each other. Hence, they can be optimized separately. Formally, S can be solved by

Let Aj be row vector with N×1 dimensions. Its ith element is ||fi−fj||22. The above optimization formula can be transformed as

This problem can be solved by an efficient iterative algorithm [Huang et al.2015].

Update W. Similar to S, the optimization processes for the columns of W are independent with each other. Hence, they can be optimized separately. Formally, its jth column Wj is solved by

The objective function in Eq.(14) can be rewritten as

We can obtain the Lagrangian function of problem (14)

ψ is also Lagrangian multiplier. By calculating the derivative of (16) with Wj and setting it to 0, we obtain the updating rule of Wj as

The main steps for solving problem (4) are summarized in Algorithm 1.

The convergence of solving problem (6) can be proven by the following theorem.

The iterative optimization process for solving Eq.(5) will monotonically decrease the objective function value until convergence.

Let ˆP be the newly updated P, we can obtain the following inequality

On the other hand, according to the Lemma 1 in [Nie et al.2010], we can obtain that for any positive number u and v, we can have

Then, we can obtain that

We can derive that

The convergence of solving Algorithm 1 can be proven by the following theorem.

The iterative optimization in Algorithm 1 can monotonically decrease the objective function of problem (4) until convergence.

As shown in Theorem 2, updating P will monotonically decrease the objective function in problem (4) (t is number of iterations).

By fixing other variables and updating F, the objective function in Eq.(8) is convex (The Hessian matrix of the Lagrangian function of Eq.(8) is positive semidefinite [Alavi1991]). Therefore, we can obtain that

By fixing other variables and updating S, optimizing the Eq.(13) is a typical Quadratic programming problem. The Hessian matrix of the Lagrangian function of problem (13) is also 1N1TN that is positive semidefinite. Therefore, we can obtain that

By fixing other variables and updating W, the Hessian matrix of Eq.(16) is BTjBj. It is positive semidefinite as WTjBTjBjWj)=||BjWj||2F≥0. Hence, the objective function for optimizing W is also convex. Then, we arrive at

, we select 7 classes composed of tree, building, airplane, cow, face, car, bicycle and each class has 30 images. We extract 5 visual features from each image: color moment with dimension 48, GIST with 512 dimension, SIFT with dimension 1230, CENTRIST feature with 210 dimension, and local binary pattern (LBP) with 256 dimension. 2)

The comparison results measured by ACC and NMI are reported in Table 1 and Table 2, respectively. For these metrics, the higher value indicates the better feature selection performance. Each metric penalizes or favors different properties in feature selection. Hence, we report results on these diverse measures to perform a comprehensive evaluation. The obtained results demonstrate that ACSL can achieve superior or at least comparable performance than the compared approaches. The promising performance of ACSL is attributed to the reason that the proposed collaborative similarity structure learning with proper neighbor assignment could positively facilitate the ultimate multi-view feature selection.

We investigate the impact of parameters α, β and γ in Eq.(4) on the performance of ACSL. Specifically, we vary one parameter by fixing the others. Figure 1 presents the main results on MSRC-V1. The obtained results clearly show that ACSL is robust to the involved three parameters. Figure 2 records the variations of the objective function value in Eq.(4) with the number of iterations on MSRC-V1 and Handwritten Numeral. We can easily observe that the convergence curves become stable within about 5 iterations. The fast convergence ensures the optimization efficiency of ACSL.