The Resilient Propagation (Rprop) algorithm has been very popular for backpropagation training of multilayer feed-forward neural networks in various applications. The standard Rprop however encounters difficulties in the context of deep neural networks as typically happens with gradient-based learning algorithms. In this paper, we propose a modification of the Rprop that combines standard Rprop steps with a special drop out technique. We apply the method for training Deep Neural Networks as standalone components and in ensemble formulations. Results on the MNIST dataset show that the proposed modification alleviates standard Rprop's problems demonstrating improved learning speed and accuracy. 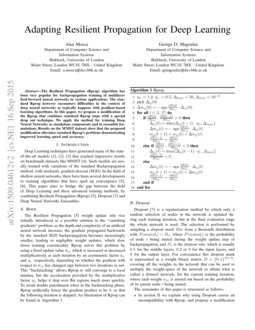 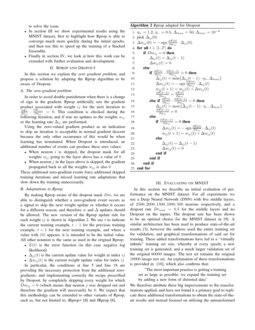 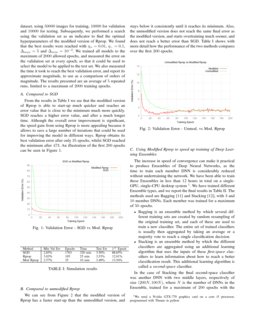 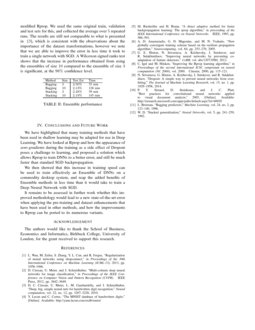 We present a technique, which we term leapfrogging, to parallelize back-...
Yatin Saraiya, et al. ∙

In this work, we present a new derivative-free optimization method and i...
Eldad Haber, et al. ∙

In this work, we present a new derivative-free optimization method and i...
Eldad Haber, et al. ∙

In this work we unify a number of inference learning methods, that are p...
Christopher Zach, et al. ∙

Despite a lack of theoretical understanding, deep neural networks have a...
Calvin Murdock, et al. ∙

Deep Learning techniques have generated many of the state-of-the-art models [1, 2, 3] that reached impressive results on benchmark datasets like MNIST [4]

. Such models are usually trained with variations of the standard Backpropagation method, with stochastic gradient descent (SGD). In the field of shallow neural networks, there have been several developments to training algorithms that have sped up convergence

[5, 6]. This paper aims to bridge the gap between the field of Deep Learning and these advanced training methods, by combining Resilient Propagation (Rprop) [5], Dropout [7] and Deep Neural Networks Ensembles.

weight update rule was initially introduced as a possible solution to the “vanishing gradients” problem: as the depth and complexity of an artificial neural network increase, the gradient propagated backwards by the standard SGD backpropagation becomes increasingly smaller, leading to negligible weight updates, which slow down training considerably. Rprop solves this problem by using a fixed update value

δij, which is increased or decreased multiplicatively at each iteration by an asymmetric factor η+ and η− respectively, depending on whether the gradient with respect to wij has changed sign between two iterations or not. This “backtracking” allows Rprop to still converge to a local minima, but the acceleration provided by the multiplicative factor η+ helps it skip over flat regions much more quickly. To avoid double punishment when in the backtracking phase, Rprop artificially forces the gradient product to be 0, so that the following iteration is skipped. An illustration of Rprop can be found in Algorithm 1.

Dropout [7] is a regularisation method by which only a random selection of nodes in the network is updated during each training iteration, but at the final evaluation stage the whole network is used. The selection is performed by sampling a dropout mask Dm

from a Bernoulli distribution with

is the probability of node

i being muted during the weight update step of backpropagation, and Dr is the dropout rate, which is usually 0.5 for the middle layers, 0.2 or 0 for the input layers, and 0 for the output layer. For convenience this dropout mask is represented as a weight binary matrix D∈{0,1}M×N, covering all the weights in the network that can be used to multiply the weight-space of the network to obtain what is called a thinned network, for the current training iteration, where each weight wij is zeroed out based on the probability of its parent node i being muted.

The remainder of this paper is structured as follows:

In this section we explain the zero gradient problem, and propose a solution by adapting the Rprop algorithm to be aware of Dropout.

In order to avoid double punishment when there is a change of sign in the gradient, Rprop artificially sets the gradient product associated with weight ij for the next iteration to ∂Et∂wij⋅∂Et+1∂wij=0. This condition is checked during the following iteration, and if true no updates to the weights wij or the learning rate Δij are performed.

Using the zero-valued gradient product as an indication to skip an iteration is acceptable in normal gradient descent because the only other occurrence of this would be when learning has terminated. When Dropout is introduced, an additional number of events can produce these zero values:

By making Rprop aware of the dropout mask Dm, we are able to distinguish whether a zero-gradient event occurs as a signal to skip the next weight update or whether it occurs for a different reason, and therefore w and Δ updates should be allowed. The new version of the Rprop update rule for each weight ij is shown in Algorithm 2. We use t to indicate the current training example, t−1 for the previous training example, t+1 for the next training example, and where a value with (0) appears, it is intended to be the initial value. All other notation is the same as used in the original Rprop:

In particular, the conditions at line 5 and line 18 are providing the necessary protection from the additional zero-gradients, and implementing correctly the recipe prescribed by Dropout, by completely skipping every weight for which Dmij=0 (which means that neuron j was dropped out and therefore the gradient will necessarily be 0. We expect that this methodolgy can be extended to other variants of Rprop, such as, but not limited to, iRprop+ [8] and JRprop [6].

In this section we describe an initial evaluation of performance on the MNIST dataset. For all experiments we use a Deep Neural Network (DNN) with five middle layers, of 2500,2000,1500,1000,500 neurons respectively, and a dropout rate Drmid=0.5 for the middle layers and no Dropout on the inputs. The dropout rate has been shown to be an optimal choice for the MNIST dataset in [9]. A similar architecture has been used to produce state-of-the-art results [3], however the authors used the entire training set for validation, and graphical transformations of said set for training. These added transformations have led to a “virtually infinite” training set size, whereby at every epoch, a new training set is generated, and a much larger validation set of the original 60000 images. The test set remains the original 10000 image test set. An explanation of these transformations is provided in  [10], which also confirms that:

“The most important practice is getting a training set as large as possible: we expand the training set by adding a new form of distorted data”

We therefore attribute these big improvements to the transformations applied, and have not found it a primary goal to replicate these additional transformations to obtain the state-of-the-art results and instead focused on utilising the untransformed dataset, using 50000 images for training, 10000 for validation and 10000

for testing. Subsequently, we performed a search using the validation set as an indicator to find the optimal hyperparameters of the modified version of Rprop. We found that the best results were reached with

η+=0.01, η−=0.1, Δmax=5 and Δmin=10−3. We trained all models to the maximum of 2000 allowed epochs, and measured the error on the validation set at every epoch, so that it could be used to select the model to be applied to the test set. We also measured the time it took to reach the best validation error, and report its approximate magnitude, to use as a comparison of orders of magnitude. The results presented are an average of 5 repeated runs, limited to a maximum of 2000 training epochs.

From the results in Table I we see that the modified version of Rprop is able to start-up much quicker and reaches an error value that is close to the minimum much more quickly. SGD reaches a higher error value, and after a much longer time. Although the overall error improvement is significant, the speed gain from using Rprop is more appealing because it allows to save a large number of iterations that could be used for improving the model in different ways. Rprop obtains its best validation error after only 35 epochs, whilst SGD reached the minimum after 473. An illustration of the first 200 epochs can be seen in Figure 1.

The increase in speed of convergence can make it practical to produce Ensembles of Deep Neural Networks, as the time to train each member DNN is considerably reduced without undertraining the network. We have been able to train these Ensembles in less than 12 hours in total on a single-GPU, single-CPU desktop system 111

We used a Nvidia GTX-770 graphics card on a core i5 processor, programmed with Theano in python

. We have trained different Ensemble types, and we report the final results in Table II. The methods used are Bagging [11] and Stacking [12], with 3 and 10 member DNNs. Each member was trained for a maximum of 50 epochs.

In the case of Stacking the final second-space classifier was another DNN with two middle layers, respectively of size (200N,100N), where N is the number of DNNs in the Ensemble, trained for a maximum of 200 epochs with the modified Rprop. We used the same original train, validation and test sets for this, and collected the average over 5 repeated runs. The results are still not comparable to what is presented in  [3], which is consistent with the observations about the importance of the dataset transformations, however we note that we are able to improve the error in less time it took to train a single network with SGD. A Wilcoxon signed ranks test shows that the increase in performance obtained from using the ensembles of size 10 compared to the ensemble of size 3 is significant, at the 98% confidence level.

We have highlighted that many training methods that have been used in shallow learning may be adapted for use in Deep Learning. We have looked at Rprop and how the appearance of zero-gradients during the training as a side effect of Dropout poses a challenge to learning, and proposed a solution which allows Rprop to train DNNs to a better error, and still be much faster than standard SGD backpropagation.

We then showed that this increase in training speed can be used to train effectively an Ensemble of DNNs on a commodity desktop system, and reap the added benefits of Ensemble methods in less time than it would take to train a Deep Neural Network with SGD.

It remains to be assessed in further work whether this improved methodology would lead to a new state-of-the-art error when applying the pre-training and dataset enhancements that have been used in other methods, and how the improvements to Rprop can be ported to its numerous variants.

The authors would like to thank the School of Business, Economics and Informatics, Birkbeck College, University of London, for the grant received to support this research.