The potential positive impact of autonomous driving and driver assistance technolo- gies have been a major impetus over the last decade. On the flip side, it has been a challenging problem to analyze the performance of human drivers or autonomous driving agents quantitatively. In this work, we propose a generic method that compares the performance of drivers or autonomous driving agents even if the environmental conditions are different, by using the driver behavioral advantage instead of absolute metrics, which efficiently removes the environmental factors. A concrete application of the method is also presented, where the performance of more than 100 truck drivers was evaluated and ranked in terms of fuel efficiency, covering more than 90,000 trips spanning an average of 300 miles in a variety of driving conditions and environments. 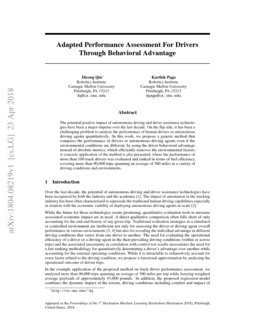 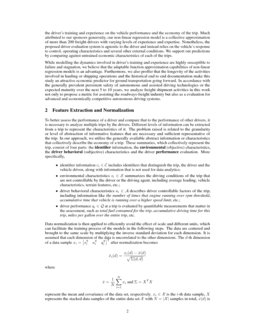 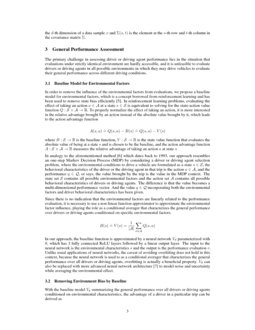 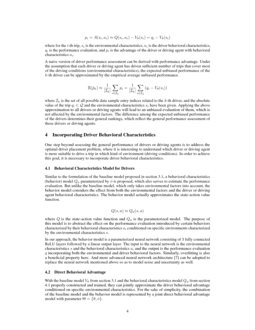 Over the last decade, the potential of autonomous driving and driver assistance technologies have been recognized by both the industry and the academia [1]. The impact of automation in the trucking industry has been often characterized to supersede the traditional human driving capabilities especially in relation with the economic viability of deploying autonomous driving agents at-scale [2].

While the future for these technologies seems promising, quantitative evaluation tools to measure associated economic impact are in need. A direct qualitative comparison often falls short of only accounting for the end-end history of any given trip. Traditional evaluation strategies in a simulated or controlled environment are inefficient not only for assessing the driver or driving agent overall performance in various environments [3, 4] but also for revealing the individual advantage in different driving conditions that varies from one driver to another. The need for evaluating the operational efficiency of a driver or a driving agent in the then-prevailing driving conditions (within or across trips) and the associated uncertainty in correlation with control test results necessitates the need for a fair ranking methodology for quantitatively determining a driver’s advantage over another while accounting for the external operating conditions. While it is intractable to exhaustively account for every factor related to the driving condition, we propose a functional approximation by analyzing the operational outcome of driven trips.

In the example application of the proposed method on truck driver performance assessment, we analyzed more than 90,000 trips spanning an average of 300 miles per trip while ferrying weighted average payloads of approximately 43,000 pounds. In addition, the proposed regression model combines the dynamic impact of the terrain, driving conditions including comfort and impact of the driver’s training and experience on the vehicle performance and the economy of the trip. Much attributed to our sponsors generosity, our non-linear regression model is a collective approximation of more than 200 freight drivers with varying levels of experience and expertise. Nonetheless, the proposed driver evaluation system is agnostic to the driver and instead relies on the vehicle’s response to control, operating characteristics and several other external conditions. We support our predictions by comparing against untrained economic characteristics of each of the trips.

While modelling the dynamics involved in driver’s training and experience are highly susceptible to failure and stagnation, we believe that the adaptable function approximation capabilities of non-linear regression models is an advantage. Furthermore, we also proffer that the longevity of the activities involved in hauling or shipping operations and the historical end to end documentation make this study an attractive economic predictor for ground transportation going forward. In accordance with the generally prevalent persistent safety of autonomous and assisted driving technologies or the expected maturity over the next 5 to 10 years, we analyze freight shipment activities in this work not only to propose a metric for assisting the roadways-freight industry but also as a evaluation for advanced and economically competitive autonomous driving systems.

To better assess the performance of a driver and compare that to the performance of other drivers, it is necessary to analyze multiple trips by the drivers. Different levels of information can be extracted from a trip to represent the characteristics of it. The problem raised is related to the granularity or level of abstraction of informative features that are necessary and sufficient representative of the trip. In our approach, we utilize the generally available abstract information or characteristics that collectively describe the economy of a trip. These summaries, which collectively represent the trip, consist of four parts: the identifier information, the environmental (objective) characteristics, the driver behavioral (subjective) characteristics and the driver performance evaluation. More specifically,

Data normalization is then applied to efficiently avoid the effect of scale and different units, which can facilitate the training process of the models in the following steps. The data are centered and brought to the same scale by multiplying the inverse standard deviation for each dimension. It is assumed that each dimension of the data is uncorrelated to the other dimensions. The

represent the mean and covariance of the data set, respectively. xi∈X is the i-th data sample, X represents the stacked data samples of the entire data set X with N=|X| samples in total, x(d) is the d-th dimension of a data sample x and Σ(s,t) is the element at the s-th row and t-th column in the covariance matrix Σ.

[5]. In reinforcement learning problems, evaluating the effect of taking an action a∈A at a state s∈S is equivalent to solving for the state-action value function Q:S×A→R. To properly normalize the effect of taking an action, it is more interested in the relative advantage brought by an action instead of the absolute value brought by it, which leads to the action advantage function

where B:S→R is the baseline function, V:S→R is the state value function that evaluates the absolute value of being at a state s and is chosen to be the baseline, and the action advantage function A:S×A→R measures the relative advantage of taking an action a at state s.

In analogy to the aforementioned method [6]

which dates back to 1993, our approach resembles an one-step Markov Decision Process (MDP) by considering a driver or driving agent selection problem, where the environmental conditions to drive a vehicle are formulated as a state

s∈S, the behavioral characteristics of the driver or the driving agent in that trip is the action a∈A, and the performance q∈Q, or says, the value brought by the trip is the value in the MDP context. The state set S contains all possible environmental factors and the action set A

contains all possible behavioral characteristics of drivers or driving agents. The difference is that the value becomes a multi-dimensional performance vector. And the value

q∈Q incorporating both the environmental factors and driver behavioral characteristics has been given.

In our approach, the baseline function is approximated by a neural network

Vθ parameterized with θ, which has 3

fully connected ReLU layers followed by a linear output layer. The input to the neural network is the environmental characteristics

s and the output is the performance evaluation v. Unlike usual applications of neural networks, the caveat of avoiding overfitting does not hold in this context, because the neural network is used to as a conditional averager that characterizes the general performance over all drivers or driving agents, overfitting is actually a beneficial property. Vθ can also be replaced with more advanced neural network architecture [7] to model noise and uncertainty while averaging the environmental effect.

With the baseline model Vθ summarizing the general performance over all drivers or driving agents conditioned on environmental characteristics, the advantage of a driver in a particular trip can be derived as

A naive version of driver performance assessment can be derived with performance advantage. Under the assumption that each driver or driving agent has driven sufficient number of trips that cover most of the driving conditions (environmental characteristics), the expected unbiased performance of the k-th driver can be approximated by the empirical average unbiased performance.

where Ik is the set of all possible data sample entry indices related to the k-th driver, and the absolute value of the trip qi∈Q and the environmental characteristics si have been given. Applying the above approximation to all drivers or driving agents will lead to an unbiased evaluation of them, which is not affected by the environmental factors. The difference among the expected unbiased performance of the drivers determines their general rankings, which reflect the general performance assessment of these drivers or driving agents.

One step beyond assessing the general performance of drivers or driving agents is to address the optimal driver placement problem, where it is interesting to understand which driver or driving agent is more suitable to drive a trip in which kind of environment (driving conditions). In order to achieve this goal, it is necessary to incorporate driver behavioral characteristics.

Similar to the formulation of the baseline model proposed in section 3.1, a behavioral characteristics (behavior) model Qϕ parameterized by ϕ

With the baseline model Vθ from section 3.1 and the behavioral characteristics model Qϕ from section 4.1 properly constructed and trained, they can jointly approximate the driver behavioral advantage conditioned on specific environmental characteristics. For the sake of simplicity, the combination of the baseline model and the behavior model is represented by a joint direct behavioral advantage model with parameter Θ={θ,ϕ}.

The architecture of the direct behavioral advantage model in our approach is a joint neural network consisting of the baseline model network and the behavior model network as shown below in figure 1. The architectural details of the two sub networks follow the design in sections 3.1 and 4.1.

The search strategy for the optima a∗ can be gradient descent with multiple starts, or gradient-free methods such as CMA-ES [8] which also has the potential for global optimization [9, 10, 11, 12]. Although the parameterized direct behavioral advantage network AΘ is an approximation to the true advantage function, with the assumption of smooth continuity, the optimized driver behavioral characteristics ~a∗ over AΘ shall approximate a∗.

The presented methods to assess the general performance of drivers or driving agents and solve the optimal driver placement problem are applied to a truck driving data set of 92273 freight trips. A baseline model as proposed in section 3.1 was trained in a supervised manner for 100epochs with the environmental characteristics data as input and the performance evaluation data as output. Similarly, a behavior model mentioned in section 4.1 was also trained for 100 epochs with both the environmental characteristics data and the driver behavioral characteristics data jointly as input and the performance evaluation data as output. The training processes of the two aforementioned parameterized models are shown in figure 2. After the training, the baseline model and the behavior model reached a mean squared error (MSE) loss of 0.145018 and 0.122050, respectively.

And the averaged behavioral characteristics of driver k is defined as

where ai∈A and Ik is the set of all possible data sample entry indices related to the k-th driver.

The primary contributions of this work include a generic method in assessing the general performance of a driver or driving agent proposed in section 3 and a method that incorporates driver behavioral characteristics in section 4 to approach the optimal driver placement problem. These two methods are applied to a truck freight data set with more than 90,000 records of trips to fairly analyze the performance of truck drivers in terms of overall fuel efficiency of their trips considering the environmental difference when the trip data are collected, and find the truck driver most suitable for a new trip regarding their past records.

The source code111https://github.com/davidqiu1993/Hackauton2018_DolanWins for this work is available to the public.

and the sponsor of the problem and the dataset.

Appendix A General Performance Ranking Results of the Truck Drivers

As listed below is the ranking results of the truck driver general performance generated by subtracting the baseline performance from the raw performance evaluation with the metric of miles per gallon over the entire trip and averaging the driver behavioral advantage, using the method described in section 3.2. The higher the advantage is, the better the driver performed in general, with estimation error presented in brackets.