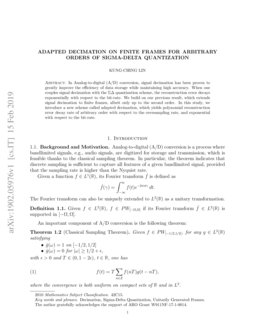 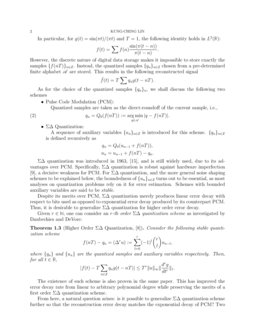 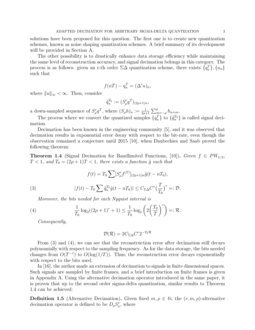 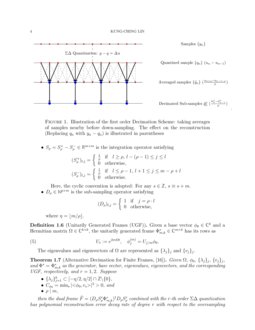 Analog-to-digital (A/D) conversion is a process where bandlimited signals, e.g., audio signals, are digitized for storage and transmission, which is feasible thanks to the classical sampling theorem. In particular, the theorem indicates that discrete sampling is sufficient to capture all features of a given bandlimited signal, provided that the sampling rate is higher than the Nyquist rate.

^f is defined as

The Fourier transform can also be uniquely extended to L2(R) as a unitary transformation.

An important component of A/D conversion is the following theorem:

where the convergence is both uniform on compact sets of R and in L2.

However, the discrete nature of digital data storage makes it impossible to store exactly the samples {f(nT)}n∈Z. Instead, the quantized samples {qn}n∈Z chosen from a pre-determined finite alphabet A are stored. This results in the following reconstructed signal

As for the choice of the quantized samples {qn}n, we shall discuss the following two schemes

ΣΔ quantization was introduced in 1963, [15], and is still widely used, due to its advantages over PCM. Specifically, ΣΔ quantization is robust against hardware imperfection [9], a decisive weakness for PCM. For ΣΔ quantization, and the more general noise shaping schemes to be explained below, the boundedness of {un}n∈Z

turns out to be essential, as most analyses on quantization problems rely on it for error estimation. Schemes with bounded auxiliary variables are said to be

Given r∈N, one can consider an r-th order ΣΔ quantization scheme as investigated by Daubechies and DeVore:

where {qn} and {un} are the quantized samples and auxiliary variables respectively. Then, for all t∈R,

The existence of such scheme is also proven in the same paper. This has improved the error decay rate from linear to arbitrary polynomial degree while preserving the merits of a first order ΣΔ quantization scheme.

From here, a natural question arises: is it possible to generalize ΣΔ quantization scheme further so that the reconstruction error decay matches the exponential decay of PCM? Two solutions have been proposed for this question. The first one is to create new quantization schemes, known as noise shaping quantization schemes. A brief summary of its development will be provided in Section A.

The other possibility is to drastically enhance data storage efficiency while maintaining the same level of reconstruction accuracy, and signal decimation belongs in this category. The process is as follows: given an r-th order ΣΔ quantization scheme, there exists {qTn},{un} such that

The process where we convert the quantized samples {qTn} to {~qT0n} is called signal decimation.

Decimation has been known in the engineering community [5], and it was observed that decimation results in exponential error decay with respect to the bit-rate, even though the observation remained a conjecture until 2015 [10], when Daubechies and Saab proved the following theorem:

Moreover, the bits needed for each Nyquist interval is

In [16], the author made an extension of decimation to signals in finite dimensional spaces. Such signals are sampled by finite frames, and a brief introduction on finite frames is given in Appendix A. Using the alternative decimation operator introduced in the same paper, it is proven that up to the second order sigma-delta quantization, similar results to Theorem 1.4 can be achieved:

Given a base vector

The eigenvalues and eigenvectors of

Given Ω, ϕ0, {λj}j, {vj}j, and Φ∗=Φ∗m,k as the generator, base vector, eigenvalues, eigenvectors, and the corresponding UGF, respectively, and r=1,2. Suppose

then the dual frame ~F=(DρSrρΦ∗m,k)†DρSrρ combined with the r-th order ΣΔ quantization has polynomial reconstruction error decay rate of degree r with respect to the oversampling rate ρ:

Moreover, the total bits used to record the quantized samples are R=O(log(m)) bits, where the constant depends on r. Suppose m/ρ=η is fixed as m→∞, then as a function of bits used at each entry, Em,ρ satisfies

The constant C is independent of the oversampling rate ρ.

ΣΔ quantization can also be applied to finite frames. It is proven [3] that for any family of frames with bounded frame variation, the reconstruction error decays linearly with respect to the oversampling rate m/k, where the frame is an m×k matrix. With different choices of dual frames, [4] proposed that the so-called Sobolev dual achieves minimum induced matrix 2-norm for reconstructions. By carefully matching between the dual frame and the quantization scheme, [7] proved that using β

-dual for random frames will result in exponential decay with near-optimal exponent and high probability.

In [5], using the assumption that the noise in ΣΔ quantization is random along with numerical experiments, it was asserted that decimation greatly reduces the number of bits needed while maintaining the reconstruction accuracy. In [10], a rigorous proof was given to show that such an assertion is indeed valid, and the reduction of bits used turns the linear decay into exponential decay with respect to the bit-rate.

As for the adaptation to finite dimensional signals, the author proved in [16] that there exists a similar operator called the alternative decimation operator that behaves similarly to the decimation for bandlimited signals. In particular, for the first and second order of ΣΔ quantization, it is possible to achieve exponential reconstruction error decay with respect to the bit-rate as well. However, similar to the caveat of decimation, it merely improves the storage efficiency while maintaining the same level reconstruction error. Thus, the error rate with respect to the oversampling rate remains the same (quadratic for the second order,) which is still inferior to other noise shaping schemes.

We have seen in Theorem 1.7 that alternative decimation is only useful up to the second order. Thus, we aim to extend our results to arbitrary orders, and the solution we present here is called the adapted decimation.

Given r,m,ρ∈N, the (r,m,ρ)-adapted decimation operator is defined to be

It will be shown that, for unitarily generated frames Φ∗∈Cm×k satisfying conditions specified in Theorem 2.2, an r-th order ΣΔ quantization coupled with the corresponding adapted decimation has r-th order polynomial reconstruction error decay rate with respect to the ratio ρ. As for the data storage, decimation allows for highly efficient storage, making the error decay exponentially with respect to the bits used.

For the rest of the paper, we shall also assume that our ΣΔ quantization scheme is stable, i.e. ∥u∥∞ remains bounded as the dimension m→∞.

We also choose the quantization alphabet A to be A0 which is uniformly spaced and symmetric around the origin: Given δ>0, we define

For complex Euclidean spaces, we define A=A0+ıA0 to be the mid-rise quantizer with length 2K. Throughout this paper we shall always deal with such A.

Given Ω, ϕ0, {λj}j, {vj}j, and Φ∗=Φ∗m,k as the generator, base vector, eigenvalues, eigenvectors, and the corresponding UGF, respectively, and r∈N fixed. Suppose

where η=m/ρ, then the following statements are true:

Harmonic frames are unitarily generated frames with the generator Ω being the diagonal matrix with entries {nj} and the base vector ϕ0=(1,…,1)t/√k, so Theorem 2.2 is applicable for harmonic frames as well.

First, we claim that ¯Δρ scales down to the usual backward-difference matrix under the under-sampling matrix Dρ:

where the fourth equality follows from Lemma 3.1, and ∥M∥∞→2=supv:∥v∥∞=1∥Mv∥2 is the ∞-to-2 norm of M. Thus, in order to obtain this estimate, we need to answer two questions:

The the first question will be answered positively in Proposition 3.11, and the estimate in the third question is given in Lemma 3.13.

Aside from the reconstruction error estimate, we also need to calculate the bits needed to record the decimated sample Arq, which will be done in Lemma 3.14.

3.1. The Effect of Adapted Decimation on the Frame

We start by introducing the following notation:

Given l,s∈N, the l-by-s constant matrix 1l,s has constant 1 on all entries.

The following two lemmas are needed for us to describe ArΦ∗m,k in Proposition 3.5.

can be diagonalized by a unitary matrix

Combining Lemma 3.3 and 3.4, one has the following expansion:

From the two assertions above, we get

From (8), we can divide ArΦ∗m,k into two parts: 1ρrDρΦ∗m,k~Dr~Cr being the main term, and the rest being residual terms. In this section, we shall investigate the behavior of the residual terms.

First, it can easily be seen that al,s=0 for all s≤0 by induction on l. Then, by definition and induction on j,

where the third equality follows from the fact that s1+⋯+sκ−1≤(κ−1)ρ. ∎