In this note we study the complexity of some generalizations of the notion of st-numbering. Suppose that given some functions f and g, we want to order the vertices of a graph such that every vertex v is preceded by at least f(v) of its neighbors and succeeded by at least g(v) of its neighbors. We prove that this problem is solvable in polynomial time if fg≡ 0, but it becomes NP-complete for f≡ g ≡ 2. This answers a question of the first author posed in 2009. 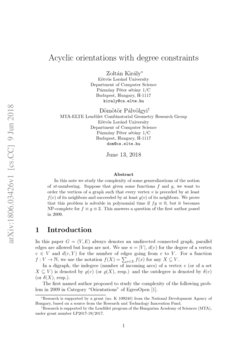 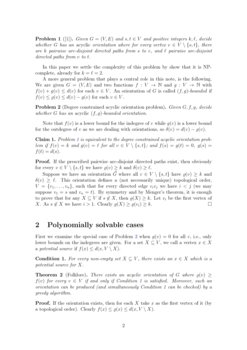 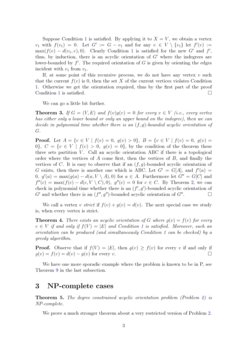 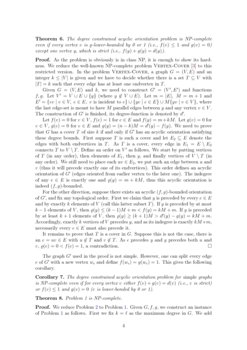 In this paper G=(V,E) always denotes an undirected connected graph, parallel edges are allowed but loops are not. We use n=|V|, d(v) for the degree of a vertex v∈V and d(v,Y) for the number of edges going from v to Y. For a function f:V→N, we use the notation f(X)=∑x∈Xf(x) for any X⊆V.

The first named author proposed to study the complexity of the following problem in 2009 in Category “Orientations” of EgresOpen [1].

In this paper we settle the complexity of this problem by show that it is NP-complete, already for k=ℓ=2.

Given G,f,g, decide whether G has an acyclic (f,g)-bounded orientation.

Suppose we have an orientation →G where all v∈V∖{s,t} have ϱ(v)≥k and δ(v)≥ℓ. This orientation defines a (not necessarily unique) topological order, V={v1,…,vn}, such that for every directed edge vivj we have i<j (we may suppose v1=s and vn=t). By symmetry and by Menger’s theorem, it is enough to prove that for any X⊆V if s∉X, then ϱ(X)≥k. Let vi be the first vertex of X. As s∉X we have i>1. Clearly ϱ(X)≥ϱ(vi)≥k. □

First we examine the special case of Problem 2 when g(v)=0 for all v, i.e., only lower bounds on the indegrees are given. For a set X⊆V, we call a vertex x∈X a potential source if f(x)≤d(x,V∖X).

For every non-empty set X⊆V, there exists an x∈X which is a potential source for X.

There exists an acyclic orientation of G where ϱ(v)≥f(v) for every v∈V if and only if Condition 1 is satisfied. Moreover, such an orientation can be produced (and simultaneously Condition 1 can be checked) by a greedy algorithm.

Proof. If the orientation exists, then for each X take x as the first vertex of it (by a topological order). Clearly f(x)≤ϱ(x)≤d(x,V∖X).

Suppose Condition 1 is satisfied. By applying it to X=V, we obtain a vertex v1 with f(v1)=0. Let G′:=G−v1 and for any v∈V∖{v1} let f′(v):=max(f(v)−d(v1,v),0). Clearly Condition 1 is satisfied for the new G′ and f′, thus, by induction, there is an acyclic orientation of G′ where the indegrees are lower-bounded by f′. The required orientation of G is given by orienting the edges incident with v1 from v1.

If, at some point of this recursive process, we do not have any vertex v such that the current f(v) is 0, then the set X of the current vertices violates Condition 1. Otherwise we get the orientation required, thus by the first part of the proof Condition 1 is satisfied. □

We can go a little bit further.

If G=(V,E) and f(v)g(v)=0 for every v∈V (i.e., every vertex has either only a lower bound or only an upper bound on the indegree), then we can decide in polynomial time whether there is an (f,g)-bounded acyclic orientation of G.

We call a vertex v strict if f(v)+g(v)=d(v). The next special case we study is, when every vertex is strict.

There exists an acyclic orientation of G where ϱ(v)=f(v) for every v∈V if and only if f(V)=|E| and Condition 1 is satisfied. Moreover, such an orientation can be produced (and simultaneously Condition 1 can be checked) by a greedy algorithm.

We have one more sporadic example where the problem is known to be in P, see Theorem 9 in the last subsection.

We prove a much stronger theorem about a very restricted version of Problem 2.

Proof. As the problem is obviously is in class NP, it is enough to show its hardness. We reduce the well-known NP-complete problem Vertex-Cover [3] to this restricted version. In the problem Vertex-Cover, a graph G=(V,E) and an integer k≤|V| is given and we have to decide whether there is a set T⊆V with |T|=k such that every edge has at least one endvertex in T.

Let f(v)=0 for v∈V, f(e)=1 for e∈E and f(y)=m+kM. Let g(v)=0 for v∈V, g(e)=0 for e∈E and g(y)=(n−k)M=d′(y)−f(y). We need to prove that G has a cover T of size k if and only if G′ has an acyclic orientation satisfying these degree bounds. First suppose T is such a cover and let E2⊆E denote the edges with both endvertices in T. As T is a cover, every edge in E1=E∖E2 connects T to V∖T. Define an order on V′ as follows. We start by putting vertices of T (in any order), then elements of E1, then y, and finally vertices of V∖T (in any order). We still need to place each uv∈E2, we put such an edge between u and v (thus it will precede exactly one of its endvertices). This order defines an acyclic orientation of G′ (edges oriented from earlier vertex to the later one). The indegree of any e∈E is exactly one and ϱ(y)=m+kM, thus this acyclic orientation is indeed (f,g)-bounded.

It remains to prove that T is a cover in G. Suppose this is not the case, there is an e=uv∈E with u∉T and v∉T. As e precedes y and y precedes both u and v, ϱ(e)=0<f(e)=1, a contradiction. □

The graph G′ used in the proof is not simple. However, one can split every edge e of G′ with a new vertex we and define f(we)=g(we)=1. This gives the following corollary.

The degree constrained acyclic orientation problem for simple graphs is NP-complete even if for every vertex v either f(v)+g(v)=d(v) (i.e., v is strict) or f(v)≤1 and g(v)=0 (v is lower-bonded by 0 or 1).

By Claim 1, it is enough to show that the following are equivalent.

The first case is well known, it was solved in [2] where st-numbering was introduced.

If k=ℓ is fixed to one, then we can answer Problem 1 in polynomial time, namely there is a required orientation if and only if G+st is biconnected.

On the other hand, we can prove the following.

We are left to connect the literals to the skeleton. For i=1,…,n, we connect both xi and ¯xi to yi and zi. Then for j=1,…,m, we connect Cj to the three literals it contains. Finally we add two parallel edges between s and any literal, and also between t and every literal.

The construction of G is finished, see Figure 1.

First we show that if we have an assignment to the variables such that every clause has at least one and at most two True literals in it, then we can make an acyclic orientation of G where for every vertex v∈V∖{s,t} we have ϱ(v)≥2 and δ(v)≥2. We give the orientation by defining the topological order. First we define the order of the skeleton:

Note that the vertices ai are ordered by the indices, and every yi,zi,Cj is between its two neighbors. So far each ai has indegree 2 and outdegree 2 for 1≤i≤4n+2m and vertices yi,zi,Cj have indegree 1 and outdegree 1. Finally we place all the True literals between a1 and y1 (in any order), and we place all the False literals between zn and a4n+2m (in any order). First note that due to the parallel edges added at the end, every literal has at least two incoming and at least two outgoing arcs. As any vertex yi or zi is preceded by the True literal, and succeeded by the False literals, every yi and zi has indegree and outdegree exactly two. Finally, a clause is preceded by its True literals, we have one or two of them, consequently either its indegree is two and its outdegree is three, or vice versa.

It remains to show that if the required acyclic orientation exists, then we have an assignment to the variables such that each clause gets one or two True values. Take the topological order of a good acyclic orientation. First we claim that the skeleton is in the same order as we defined in the previous part. Suppose for a contradiction that i is the smallest index (1≤i≤4n+2m−1) such that ai+1 precedes ai. In this case ai has at least three incoming arcs, so this case is impossible. Next suppose that w is the first vertex from y1,…,yn,C1,…,Cm,z1,…,zn which is not between its two ai-neighbors. If it is before that place, then its lower-indexed ai-neighbor has indegree three, if it is after that place, then its higher-indexed ai-neighbor has outdegree three. Next observe that for all 1≤i≤n, one of xi and ¯xi must be before yi (consequently before a2n) and the other must be after zi (consequently after a2n+2m), since otherwise either yi or zi does not have the prescribed indegree two. Now we can define the assignment: a literal is True if it precedes a2n. To finish the proof, observe that if Cj has for example three True literals, then its indegree is four, so its outdegree is only one. □

The graph G used in the above proof is not simple, actually the answer is always NO for a simple graph, as the second vertex cannot have two incoming arcs. However, one can split any edge e=uv of G with a new degree four vertex we that is connected to s,u,v,t. Such a we must necessarily be between u and v, thus their in- and outdegrees will not be affected. This way we can obtain a graph that is almost simple - only edges adjacent to s or t might have multiplicity 2.

By splitting s into two vertices, s1 and s2, and similarly t into t1 and t2, and dividing the multiple edges among them, we obtain that the following problem is NP-complete.

Some of the questions left open are the following.