Reinforcement learning algorithms are known to be sample inefficient, and often performance on one task can be substantially improved by leveraging information (e.g., via pre-training) on other related tasks. In this work, we propose a technique to achieve such knowledge transfer in cases where agent trajectories contain sensitive or private information, such as in the healthcare domain. Our approach leverages a differentially private policy evaluation algorithm to initialize an actor-critic model and improve the effectiveness of learning in downstream tasks. We empirically show this technique increases sample efficiency in resource-constrained control problems while preserving the privacy of trajectories collected in an upstream task. 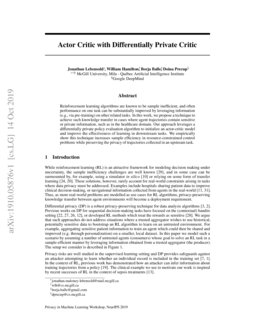 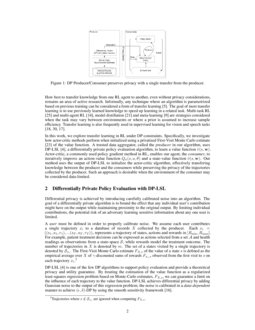 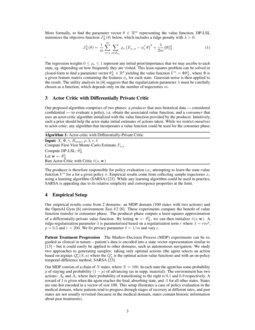 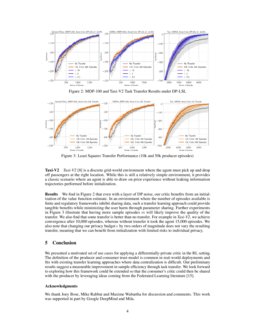 While reinforcement learning (RL) is an attractive framework for modeling decision making under uncertainty, the sample inefficiency challenges are well known Wang et al. (2017), and in some case can be surmounted by, for example, using a simulator in silico Fox and Wiens (2019)

or relying on some form of transfer learning

Taylor and Stone (2009); Parisotto et al. (2016). These solutions, however, rarely account for real-world constraints arising in tasks where data privacy must be addressed. Examples include hospitals sharing patient data to improve clinical decision-making, or navigational information collected from agents in the real-world Fridman et al. (2018); Zhu et al. (2017). Thus, as more real-world problems are modelled as use cases for RL algorithms, privacy-preserving knowledge transfer between agent environments will become a deployment requirement.

Differential privacy (DP) is a robust privacy-preserving technique for data analysis algorithms Apple (2017); Al-Rubaie and Chang (2019). Previous works on DP for sequential decision-making tasks have focused on the (contextual) bandits setting Shariff and Sheffet (2018); Tossou and Dimitrakakis (2016, 2017); Gajane et al. (2017), or developed RL methods which treat the rewards as sensitive Wang and Hegde (2019). We argue that such approaches do not address situations where a trusted aggregator wishes to use historical, potentially sensitive data to bootstrap an RL algorithm to learn on an untrusted environment. For example, aggregating sensitive patient information to train an agent which could then be shared and improved (e.g. through personalization) on a smaller, local dataset. In this paper we model such a scenario by assuming a number of untrusted agents (consumers) whose goal to solve an RL task in a sample-efficient manner by leveraging information obtained from a trusted aggregator (the producer). The setup we consider is described in Figure 1.

In this work, we explore transfer learning in RL under DP constraints. Specifically, we investigate how actor-critic methods perform when initialized using a privatized First-Visit Monte Carlo estimate

Differential privacy is achieved by introducing carefully calibrated noise into an algorithm. The goal of a differentially private algorithm is to bound the effect that any individual user’s contribution might have on the output while maintaining proximity to the original output. By limiting individual contributions, the potential risk of an adversary learning sensitive information about any one user is limited.

A user must be defined in order to properly calibrate noise. We assume each user contributes a single trajectory xi to a database of records X collected by the producer. Each xi=((s1,a1,r1),...(sT,aT,rT))i represents a trajectory of states, actions and rewards in [Rmin,Rmax]. For example, patient treatment decisions can be expressed as actions selected from a set A and health readings as observations from a state-space S, while rewards model the treatment outcome. The number of trajectories in X is denoted by m. The set of a states visited by a single trajectory is denoted by Sxi. The First-Visit Monte Carlo estimate FX,s of the value of a state s is defined as the empirical average over X of γ-discounted sums of rewards Fxi,s observed from the first visit to s on each trajectory xi.111Trajectories where s∉Sxi are ignored when computing FX,s.

DP-LSL Balle et al. (2016) is one of the few DP algorithms to support policy evaluation and provide a theoretical privacy and utility guarantee. By treating the estimation of the value function as a regularized least-squares regression problem based on Monte-Carlo estimates, FX,s, we can guarantee a limit on the influence of each trajectory to the value function. DP-LSL achieves differential privacy by adding Gaussian noise to the output of this regression problem; the noise is calibrated in a data-dependent manner to achieve (ϵ,δ)-DP by using the smooth sensitivity framework Nissim et al. (2007).

θ∈Rm representing the value function, DP-LSL minimizes the objective function JλX(θ) below, which includes a ridge penalty with λ>0:

The regression weights 0≤ρs≤1 represent any initial prior/importance that we may ascribe to each state, eg. depending on how frequently they are visited. This least-squares problem can be solved in closed-form to find a parameter vector θλX∈Rd yielding the value function ^Vπ=ΦθλX, where Φ is a given feature matrix containing the features ϕs for each state. Gaussian noise is then applied to the result. The utility analysis in Balle et al. (2016) suggests that the regularization parameter λ must be carefully chosen as a function, which depends only on the number of trajectories m.

Our proposed algorithm comprises of two phases: a producer that uses historical data — considered confidential — to evaluate a policy, i.e. obtain the associated value function; and a consumer that uses an actor-critic algorithm initialized with the value function provided by the producer. Intuitively, such a prior should help the actor make initial estimates of actions taken. While we restrict ourselves to actor-critic, any algorithm that incorporates a value function could be used for the consumer phase.

The producer is therefore responsible for policy evaluation i.e., attempting to learn the state-value function Vπ for a for a given policy π. Empirical results come from collecting sample trajectories xi using a learning algorithm (SARSA) Sutton and Barto (2018). While any learning algorithm could be used in practice, SARSA is appealing due to its relative simplicity and convergence properties at the limit.

Our empirical results come from 2 domains: an MDP domain (100 states with two actions) and the OpenAI Gym Brockman et al. (2016) environment Taxi-V2 Dietterich (2000). These experiments compare the benefit of value function transfer in consumer phase. The producer phase outputs a least-squares approximation of a differentially-private value function. By letting w←^θλX, we can then initialize ^v(s,w). A ridge-regularization parameter λ is parameterized based on a regularization term r where λ=rmp, p=0.5 and r=200. We fix privacy parameter δ=1/m and vary ϵ.

Komorowski et al. (2018) – but it could easily be applied to other domains, such as autonomous navigation. We study two approaches to generating samples: taking only optimal actions (the agent selects an action based on argmax Q∗π(S,a) where the Q∗π is the optimal action-value function) and with an on-policy temporal-difference method, SARSA Sutton and Barto (2018).

Our MDP consists of a chain of N states, where N=100

. In each state the agent has some probability

p of staying and probability (1−p) of advancing (as in supp. material). The environment has two actions: A0 and A1 where their probability of transitioning to the right is 0.1 and 0.9

respectively. A reward of 1 is given when the agent reaches the final, absorbing state, and -1 for all other states. States are one-hot encoded in a vector of size 100. This setup illustrates a case of policy evaluation in the medical domain, where patients tend to progress through stages of recovery at different rates, and past states are not usually revisited (because in the medical domain, states contain historic information about past treatments).

Taxi-V2 Dietterich (2000) is a discrete grid-world environment where the agent must pick up and drop off passengers at the right location. While this is still a relatively simple environment, it provides a classic scenario where an agent is able to draw on prior experience without leaking information trajectories performed before initialization.

We find in Figure 2 that even with a layer of DP noise, our critic benefits from an initialization of the value function estimate. In an environment where the number of episodes available is finite and regulatory frameworks inhibit sharing data, such a transfer learning approach could provide tangible benefits while minimizing the user harm through parameter sharing. Further experiments in Figure 3 illustrate that having more sample episodes m will likely improve the quality of the transfer. We also find that some transfer is better than no transfer. For example in Taxi-V2, we achieve convergence after 10,000 episodes, whereas without transfer it took the agent 15,000 episodes. We also note that changing our privacy budget ϵ by two orders of magnitude does not vary the resulting transfer, meaning that we can benefit from initialization with limited risks to individual privacy.

We presented a motivated set of use cases for applying a differentially-private critic in the RL setting. The definition of the producer and consumer trust-model is common in real-world deployments and fits with existing transfer learning approaches where data centralization is difficult. Our preliminary results suggest a measurable improvement in sample efficiency through task transfer. We look forward to exploring how this framework could be extended so that the consumer’s critic could then be shared with the producer by leveraging ideas coming from the Federated Learning literature McMahan et al. (2018).

We thank Joey Bose, Mike Rabbat and Maxime Wabartha for discussion and comments. This work was supported in part by Google DeepMind and Mila.