We propose an action classification algorithm which uses Locality-constrained Linear Coding (LLC) to capture discriminative information of human body variations in each spatiotemporal subsequence of a video sequence. Our proposed method divides the input video into equally spaced overlapping spatiotemporal subsequences, each of which is decomposed into blocks and then cells. We use the Histogram of Oriented Gradient (HOG3D) feature to encode the information in each cell. We justify the use of LLC for encoding the block descriptor by demonstrating its superiority over Sparse Coding (SC). Our sequence descriptor is obtained via a logistic regression classifier with L2 regularization. We evaluate and compare our algorithm with ten state-of-the-art algorithms on five benchmark datasets. Experimental results show that, on average, our algorithm gives better accuracy than these ten algorithms. 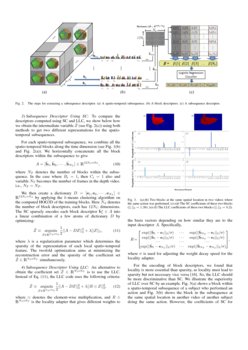 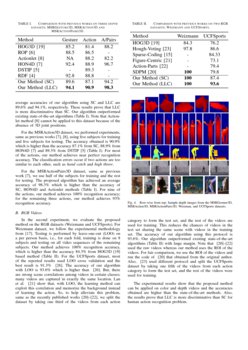 computed a vector of 8 Haar features on a uniform grid in the 4D volume. LDA was used to detect the discriminative feature positions and an SVM classifier was used for action classification. Xia and Aggarwal

[5] proposed an algorithm to extract Space Time Interest Points (STIPs) from depth sequences and modelled local 3D depth cuboid using the Depth Cuboid Similarity Feature (DCSF). However, the accuracy of this algorithm is dependent on the noise level of depth images. Tang et al. [14] proposed to use histograms of the normal vectors computed from depth images for object recognition. Given a depth image, they computed the spatial derivatives and transformed to polar coordinates (θ,ϕ,r) where the 2D histograms of (θ,ϕ) were used as object descriptors. Oreifej and Liu [7] extended these derivatives to the temporal dimension. They normalized the gradient vectors to unit magnitude and projected them onto a fixed basis before histogramming. In their formulation, the last components of the normalized gradient vectors were the inverse of the gradient magnitude. As a result, information from very strong derivative locations, such as edges and silhouettes, may get suppressed.

In [15], the HOG3D feature is computed within a small 3D cuboid centered at a space-time point and Sparse Coding (SC) is utilized to obtain a more discriminative representation. The depth images have a high level of noise and two subjects may perform one action in different styles. So, to favor sparsity, SC might select quite different elements in the dictionary for similar actions (details in Section  I-B3). To overcome this problem, we use the Locality-constrained Linear Coding (LLC) [16] in this paper to make locality more essential than sparsity. Moreover, instead of a small 3D cuboid, we divide the input video sequence into subsequences, blocks, and then cells (Fig. 1). The HOG3D features computed at the cell level are concatenated to form the descriptor at the block level. Given m classes, the LLC followed by maximum pooling and a logistic regression classifier with L2 regularization finally give mprobability values for each subsequence. The video sequence is represented by the concatenation of the subsequence descriptors. Finally, we use an SVM for action classification.

We consider an action as a function operating on a three dimensional space with (x,y,t) being independent variables and the depth (d) being the dependent variable, i.e., d=H(x,y,t). The discrimination of a particular action can be characterized by using the variations of the depth values along these dimensions.

In each cell, a 3D histogram of oriented gradients (HOG) feature [19] is computed by evaluating a gradient vector at each pixel in that cell:

The HOG feature is computed by projecting each gradient vector onto n directions obtained by joining the centers of n faces of a regular n-sided polyhedron with its center. A regular dodecahedron is a type of regular 12-sided polyhedron that is commonly used to quantize 3D gradients. It is composed of 12 regular pentagonal faces and each face corresponds to a histogram bin. Let V∈R3×12 be the matrix of the center positions v1,v2,⋯,v12 of all faces:

For a regular dodecahedron with center at the origin, these normalized vectors are given by:

Since ∇d(x,y,t) should vote into only one single bin in case it is perfectly aligned with the corresponding axis running through the origin and the face center, the projected vector dV(x,y,t) should be quantized. A threshold value ψ is computed by projecting any two neighboring vectors vi and vj, i.e.,

The quantized vector is given by

and a histogram, h∈R12, for each cell C is computed:

Note that this summation is equivalent to histogramming, because each q vector represents votes in the corresponding bins defined by the 12 directions of the regular dodecahedron.

We combine a fixed number of cells in each neighborhood into blocks. To get the block descriptor, we vertically concatenate the histograms {hj|j=1,⋯,NC} of all cells in that block (Fig. 2(b)):

where NC=BxByBt/(CxCyCt) denotes the total number of cells in each block.

The block descriptor b in (7) is normalized ^b=b/||b||2∈R12NC and a Symmetric Sigmoid function f is applied to it as a trade-off between the gradient magnitude and gradient orientation:

To compare the descriptors computed using SC and LLC, we show below how we obtain the intermediate variable ^Z (see Fig. 2(c)) using both methods to get two different representations for the spatio-temporal subsequences.

where NT denotes the number of blocks within the subsequence. In the case where Bt=1, then Ct=1 also and variable NT becomes the number of frames in the depth video. i.e., NT=NF.

We then create a dictionary D=[e1,e2,⋯,eNS]∈R12NC×NS by applying the k-means clustering algorithm on the computed HOG3D of the training blocks. Here NS denotes the number of block descriptors, each has 12NC dimensions. The SC sparsely encodes each block descriptor ^bsi∈A into a linear combination of a few atoms of dictionary D by optimizing:

where λ is a regularization parameter which determines the sparsity of the representation of each local spatio-temporal feature. The twofold optimization aims at minimizing the reconstruction error and the sparsity of the coefficient set ^Z∈RNS×NT simultaneously.

An alternative to obtain the coefficient set ^Z∈RNS×NT is to use the LLC. Instead of Eq. (11), the LLC code uses the following criteria:

where ⊙ denotes the element-wise multiplication, and R∈RNS×NT is the locality adapter that gives different weights to the basis vectors depending on how similar they are to the input descriptor A. Specifically,

where σ is used for adjusting the weight decay speed for the locality adapter.

For the encoding of block descriptors, we found that locality is more essential than sparsity, as locality must lead to sparsity but not necessary vice versa [16]. So, the LLC should be more discriminative than SC. We illustrate the superiority of LLC over SC by an example. Fig. 3(a) shows a block within a spatio-temporal subsequence of a subject who performed an action and Fig. 3(b) shows the block in the subsequence at the same spatial location in another video of another subject doing the same action. However, the coefficients of SC for these two blocks (Fig. 3(c)) are quite different (Euclidean distance is 1.38) which means using SC may lead to failure to identify the actions being the same. On the other hand, the LLC coefficients for these two blocks (Fig. 3(d)) are very similar to each other (both are distinct from the SC coefficients) and have a smaller distance apart (Euclidean distance is 0.2). As shown in this figure, LLC appears to better represent the spatio-temporal blocks.

After the optimization step (using Eq. (11) or (12)), we get a set of sparse codes ^Z=[^z1,⋯,^zNT], where each vector ^zi has only a few nonzero elements. It can also be interpreted that each block descriptor only responds to a small subset of dictionary atoms.

To capture the global statistics of the subsequence, we use a maximum pooling function given by β=ζ(^Z) (Fig. 2 (c)), where ζ returns a vector β∈RNS with the kth element defined as:

Through maximum pooling, the obtained vector β is the subsequence descriptor (Fig. 2(c)).

The probability of each action class ci for a subsequence descriptor β is P(ci|β). To calculate this probability, we use a logistic regression classifier with L2 regularization [24]. The logistic regression model was initially proposed for binary classification; however, it was later on extended to multi-class classification. Given data x, weight W, class label y, and a bias term b, it assumes the following probability model:

(W,b) by minimizing the following equation:

where 12W⊺W denotes the L2 regularization term, and γ>0 is a user-defined parameter that weights the relative importance of the two terms. The one-vs-the-rest strategy by Crammer and Singer [25] is used to solve the optimization for this multi-class problem.

In the testing stage, the sequence descriptor of the test video sequence is computed and fed to the trained classifier. The class label c∗ is defined to be the one that corresponds to the maximum probability.

We evaluate the performance of the proposed algorithm on two different types of videos: (1) depth and (2) color. For depth data, we use three standard datasets including the MSRAction3D [10, 8], MSRGesture3D [12, 6], and MSRActionPairs3D [7]. For color data, we use two standard datasets including Weizmann  [17], and UCFSports [18]. The performance of our proposed algorithm is compared with ten state-of-the-art algorithms [6, 8, 7, 19, 5, 20, 21, 22, 23, 4]. Except for  [20, 19], all accuracies are reported from the original papers and the codes are obtained from the original authors.

The Weizmann dataset contains 90 video sequences of 9 subjects, each performing 10 actions. The UCFSports dataset consists of videos from sports broadcasts, with a total of 150 videos from 10 action classes. Videos are captured in realistic scenarios with complex and cluttered background, and actions exhibit significant intra-class variation.

Experimental Settings. In all the experiments, the ROIs of the depth/RGB videos are resized to 48×64 pixels for the sake of computation. The size of each cell is 8×8 pixels (i.e., Cx=Cy=8) and the number of cells in each block is 2×2 along the X and Y dimensions (i.e., Bx=By=16), respectively. Variables Bt and Ct are set to 1; variable NS, the size of the dictionary, is set to 200. For RGB videos, we consider the variable d mentioned in Section I-A as the gray-level value of each pixel.

In the first experiment, we evaluate the proposed method on the depth datasets (MSRGesture3D, MSRAction3D and MSRActionPairs3D). To compare our method with previous techniques on MSRGesture3D dataset, we use leave-one-subject-out cross-validation scheme proposed by [6]. The average accuracies of our algorithm using SC and LLC are 89.6% and 94.1%, respectively. These results prove that LLC is more discriminative than SC. Our algorithm outperformed existing state-of-the-art algorithms (Table I). Note that Actionlet method [8] cannot be applied to this dataset because of the absence of 3D joint positions.

For the MSRAction3D dataset, we performed experiments, same as previous works [8, 7], using five subjects for training and five subjects for testing. The accuracy obtained is 90.9% which is higher than the accuracy 87.1% from SC, 88.9% from HON4D [7] and 89.3% from DSTIP [5] (Table I). For most of the actions, our method achieves near perfect recognition accuracy. The classification errors occur if two actions are too similar to each other, such as hand catch and high throw.

For the MSRActionPairs3D dataset, same as previous work [7], we use half of the subjects for training and the rest for testing. The proposed algorithm has achieved an average accuracy of 98.3% which is higher than the accuracy of SC, HON4D and Actionlet methods (Table I). For nine of the actions, our method achieves 100% recognition accuracy; for the remaining three actions, our method achieves 93% recognition accuracy.

The experimental results show that the proposed method can be applied on color and depth videos and the accuracies obtained are higher than the state-of-the-art methods. Also, the results prove that LLC is more discriminative than SC for human action recognition problem.

In this paper, we propose a new action recognition algorithm which uses LLC to capture discriminative information of human body variation in each spatio-temporal subsequence of the input depth video. The proposed algorithm has been tested and compared with ten state-of-the-art algorithms on three benchmark depth datasets and two benchmark color datasets. On average, our algorithm is found to be more accurate than these ten algorithms.

This research was supported by ARC Grant DP110102399. We thank the the authors of the depth based action classification algorithms [6, 8, 7, 5] for providing the datasets and making their code publicly available.