Acoustic Echo Cancellation (AEC) plays a key role in voice interaction. Due to the explicit mathematical principle and intelligent nature to accommodate conditions, adaptive filters with different types of implementations are always used for AEC, giving considerable performance. However, there would be some kinds of residual echo in the results, including linear residue introduced by mismatching between estimation and the reality and non-linear residue mostly caused by non-linear components on the audio devices. The linear residue can be reduced with elaborate structure and methods, leaving the non-linear residue intractable for suppression. Though, some non-linear processing methods have already be raised, they are complicated and inefficient for suppression, and would bring damage to the speech audio. In this paper, a fusion scheme by combining adaptive filter and neural network is proposed for AEC. The echo could be reduced in a large scale by adaptive filtering, resulting in little residual echo. Though it is much smaller than speech audio, it could also be perceived by human ear and would make communication annoy. The neural network is elaborately designed and trained for suppressing such residual echo. Experiments compared with prevailing methods are conducted, validating the effectiveness and superiority of the proposed combination scheme. 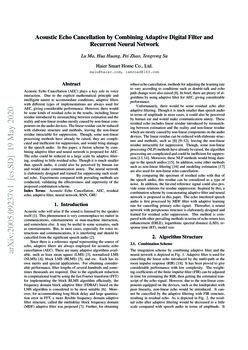 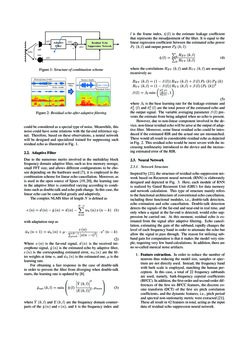 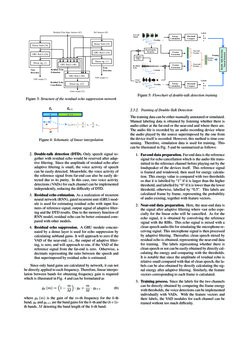 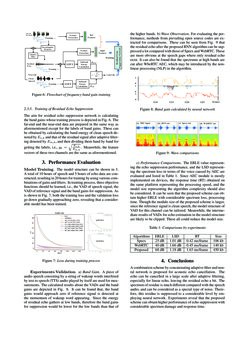 On the Role of Spatial, Spectral, and Temporal Processing for DNN-based Non-linear Multi-channel Speech Enhancement

Adaptive filters are at the core of many signal processing applications,...
Jerónimo Arenas-García, et al. ∙

Acoustic echo will arise if the sound is listened by the speaker itself [1]. This phenomenon is very commonplace no matter in communications, entertainments or man-machine interaction, and somewhere else. It may be useful in some scenarios, such as entertainments. But, in most cases, especially for voice interactions and communications, it is interfering and should be cancelled from the significant speech audio [2].

Since there is a reference signal representing the source of echo, adaptive filters are always employed for acoustic echo cancellation (AEC). There are many adaptive algorithms available, such as least mean square (LMS) [3], normalized LMS (NLMS) [4], block LMS (BLMS) [5]

, and etc. Each has its own merits and special applications. For obtaining considerable performance, filter lengths of several hundreds and sometimes thousands are required. Due to the significant reduction in computational load by using the fast Fourier transform (FFT) for implementing the block BLMS algorithm efficiently, the frequency domain block adaptive filter (FDBAF) based on the LMS algorithm is considered to be most suitable

Unfortunately, there would be some residual echo after adaptive filtering. Though it is much smaller than speech audio in terms of amplitude in most cases, it could also be perceived by human ear and would make communication annoy. These residual echo includes linear residue introduced by mismatching between estimation and the reality and non-linear residue which are mostly caused by non-linear components on the audio devices. The linear residue can be reduced with elaborate structure and methods, such as [8] [9, 10, 11, 12], leaving the non-linear residue intractable for suppression. Though, some non-linear processing (NLP) methods have already be raised, the algorithm processing are complicated and could be inefficient for suppression [13, 14]. Moreover, these NLP methods would bring damage to the speech audios [15]. In addition, some other methods such as non-linear filtering [16] and modeling estimation [17] are also used for non-linear echo cancellation.

By comparing the spectrum of residual echo with that of the speech audio, this residue can be considered as a type of noise. In addition, the far-end reference signal could also provide some relations for residue suppression. Inspired by this, a combination scheme by concatenating adaptive filter and neural network is proposed in this paper. The echo interfered speech audio is first processed by MDF filter with adaptive learning rate for cancelling primary echo signal. Thereafter, a neural network with perspicuous structure is elaborately designed and trained for residual echo suppression. This method is compared with other prevailing methods in terms of echo return loss enhancement (ERLE), logarithmic spectral distance (LSD), response time (RT), model size.

The integration scheme by combining adaptive filter and the neural network is depicted in Fig. 1. Adaptive filter is used for cancelling the linear echo introduced by the multi-path or the room impulse response (RIR) [18]. It has been proved to give considerable performance with low complexity. The weighting coefficients of the finite impulse filter (FIR) can be adjusted in time for estimating the RIR, then getting the estimated transcript of the echo signal. However, due to the non-linear components equipped on the devices, such as the loudspeaker with poor linearity, non-linear echo would be introduced. It cannot be cancelled by the adaptive filtering with FIR structure, resulting in residual echo. As is depicted in Fig. 2, the residual echo after adaptive filtering would be decreased to a little scale compared with speech audio in terms of amplitude. It could be considered as a special type of noise. Meanwhile, this noise could have some relations with the far-end reference signal. Therefore, based on these observations, a neural network will be designed and specialized trained for suppressing such residual echo as illustrated in Fig. 1.

Due to the numerous merits involved in the multidelay block frequency domain adaptive filter, such as less memory storage, small FFT size, and allows different configurations to be chosen depending on the hardware used [7]

, it is employed in the combination scheme for linear echo cancellation. Moreover, as is used in the open source of Speex

[19, 20], the learning rate in the adaptive filter is controlled varying according to conditions such as double-talk and echo path change. In this case, the linear echo can be cancelled greatly and adaptively.

The complex NLMS filter of length N is defined as

with adaptation step as

For obtaining a fast response in the case of double-talk in order to prevent the filter from diverging when double-talk starts, the learning rate is updated by [8]

where the correlations REY(k,l) and RYY(k,l) are averaged recursively as:

where β0 is the base learning rate for the leakage estimate and ^σ2^Y(l) and ^σ2e(l) are the total power of the estimated echo and the output signal. The variable averaging parameter β(l) prevents the estimate from being adapted when no echo is present.

Inspired by [21], the structure of residual echo suppression network based on Recurrent neural network (RNN) is elaborately designed and depicted in Fig. 3

. Here, each module of RNN is realized by Gated Recurrent Unit (GRU) for data memory and network calculation. This type of structure mainly refers to the functional architecture of conventional echo cancellation, including three functional modules, i.e., double-talk detection, echo estimation and echo cancellation. Double-talk detection detects the signals of the far-end and near-end in real time, and only when a signal at the far-end is detected, would echo suppression be carried out. At this moment, residual echo is estimated from the signal after adaptive filtering. Echo cancellation, estimating the gain of the subband, rapidly changes the level of each frequency band in order to attenuate the echo but allow the signal to pass through. The reason for utilizing subband gain for computation is that it makes the model very simple, requiring very few band calculations. In addition, there are no so-called musical noise artifacts.

Since only band gains are calculated by network, it can not be directly applied to each frequency. Therefore, linear interpolation between bands for obtaining frequency gain is required which is illustrated in Fig.

4 and can be formulated as

The training data can be either manually annotated or simulated. Manual labeling data is obtained by listening whether there is audio either at the far-end or the near-end and where there are. The audio file is recorded by an audio recording device where the audio played by the source superimposed by the one from the device itself is recorded. However, this method is time consuming. Therefore, simulation data is used for training. This can be illustrated in Fig. 5 and be summarized as follows:

The aim for residual echo suppression network is calculating the band gains whose training process is depicted in Fig. 6. The far-end and the near-end data are prepared in the same way as aforementioned except for the labels of band gains. These can be obtained by calculating the band energy of clean speech denoted by Es,k and that of the residual signal after adaptive filtering denoted by Em,k, and then dividing them band by band for getting the labels, i.e., gk=√Es,kEm,k. Meanwhile, the feature vectors of these two channels are the same as aforementioned.

Model Training. The model structure can be shown in 3. A total of 10 hours of speech and 5 hours of echo data are constructed, resulting in 20 hours for training by using various combinations of gains and filters. In training process, three objective functions should be learned, i.e., the VAD of speech signal, the VAD of reference signal and the band gains for suppression. As is shown in Fig. 7, both the training loss and the validation loss go down gradually approaching zero, revealing that a considerable model has been trained.

Experiments Validation. a) Band Gain. A piece of audio speech consisting by a string of wakeup words interfered by text to speech (TTS) audio played by itself are used for measurements. The calculated results about the VADs and the band gains are depicted in Fig. 8. It can be found that, the band gains would approach zero if reference signal is detected at the momentum of wakeup word appearing. Since the energy of residual echo gathers at low bands, therefore the band gains for suppression would be lower for the low bands than that of the higher bands. b) Wave Observation. For evaluating the performance, methods from prevailing open source codes are extracted for comparisons. These can be seen from Fig. 9 that the residual echo after the proposed RNN algorithm can be suppressed a lot compared with those of Speex and WebRTC. These are more obvious at the speech gaps where only residual echo exist. It can also be found that the spectrums at high bands are cut after WbeRTC AEC, which may be introduced by the non-linear processing (NLP) in the algorithm.

c) Performance Comparisons. The ERLE value representing the echo suppression performance, and the LSD representing the spectrum loss in terms of the voice caused by AEC are evaluated and listed in Table 1. Since AEC module is mostly implemented on devices, the response time (RT) obtained on the same platform representing the processing speed, and the model size representing the algorithm complexity should also be considered. It can be seen that the proposed scheme can obtain higher ERLE with considerable spectrum loss, processing time. Though the module size of the proposed scheme is larger, since the reference signal is clean speech, the model structure of VAD for this channel can be tailored. Meanwhile, the intermediate results of VADs for echo estimation in the model structure are likely to be clipped. These all could reduce the model size.

A combination scheme by concatenating adaptive filter and neural network is proposed for acoustic echo cancellation. The echo can be cancelled in a large scale after adaptive filtering, especially for linear echo, leaving the residual echo a bit. The spectrum of residue is much different compared with the speech audio, and can be considered as a special type of noise. Therefore, this residue is suppressed to a considerable level by employing neural network. Experiments reveal that the proposed scheme can obtain higher performance of echo suppression with considerable spectrum damage and response time.