We study the problem of minimizing the time-average expected Age of Information for status updates sent by an energy-harvesting source with a finite-capacity battery. In prior literature, optimal policies were observed to have a threshold structure under Poisson energy arrivals, for the special case of a unit-capacity battery. In this paper, we generalize this result to any (integer) battery capacity, and explicitly characterize the threshold structure. We obtain tools to derive the optimal policy for arbitrary energy buffer (i.e. battery) size. One of these results is the unexpected equivalence of the minimum average AoI and the optimal threshold for the highest energy state. 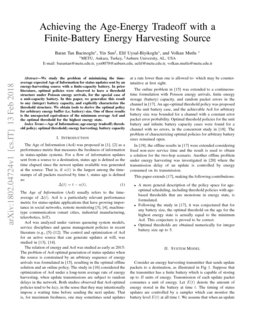 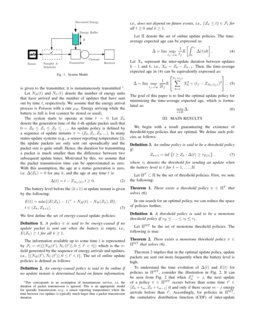 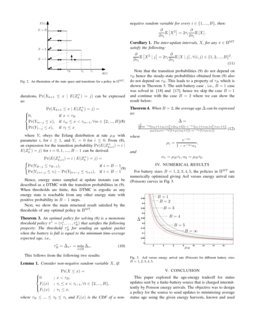 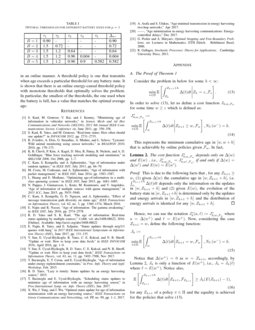 The Age of Information (AoI) was proposed in [1, 2] as a performance metric that measures the freshness of information in status-update systems. For a flow of information updates sent from a source to a destination, status age is defined as the time elapsed since the newest update available was generated at the source. That is, if u(t) is the largest among the time-stamps of all packets received by time t, status age is defined as:

AoI was analyzed under various queueing system models, service disciplines and queue management policies in recent literature (e.g., [5, 6, 7, 8, 9, 10, 11, 12]. The control and optimization of AoI for an active source that can generate updates at will, was studied in [13, 14].

The relation of energy and AoI was studied as early as 2015: The problem of AoI-optimal generation of status updates when the source is constrained by an arbitrary sequence of energy arrivals was formulated in [15], resulting in the optimal offline solution and an online policy. The study in [16] considered the optimization of AoI under a long-term average rate of energy harvesting, when update transmissions are subject to random delays in the network. Both studies observed that AoI-optimal policies tend to be lazy, in the sense that they may intentionally impose a waiting time before sending the next update. That is, for maximum freshness, one may sometimes send updates at a rate lower than one is allowed to- which may be counter-intuitive at first sight.

The online problem in [15] was extended to a continuous-time formulation with Poisson energy arrivals, finite energy storage (battery) capacity, and random packet errors in the channel in [17]

. An age-optimal threshold policy was proposed for the unit battery case, and the achievable AoI for arbitrary battery size was bounded for a channel with a constant error packet error probability. Optimal threshold policies for the unit battery and infinite battery capacity cases were found for a channel with no errors, in the concurrent study in

In [19], the offline results in [17] were extended considering fixed non-zero service time and the result is used to obtain a solution for the two-hop scenario. Another offline problem under energy harvesting was investigated in [20] where the transmission delay of an update is controlled by energy consumed on its transmission.

Consider an energy harvesting transmitter that sends update packets to a destination, as illustrated in Fig 1. Suppose that the transmitter has a finite battery which is capable of storing up to B units of energy. Transmission of each update packet consumes a unit of energy. Let E(t) denote the amount of energy stored in the battery at time t. The timing of status updates are controlled by a sampler which can monitor the battery level E(t) at all time t.

Let NH(t) and NU(t) denote the number of energy units that have arrived and the number of updates that have sent out by time t, respectively. We assume that the energy arrival process is Poisson with a rate μH. Energy arriving while the battery is full is lost (cannot be stored or used).

The system starts to operate at time t=0. Let Zk denote the generation time of the k-th update packet such that 0=Z0≤Z1≤Z2≤…. An update policy is defined by a sequence of update instants π=(Z0,Z1,Z2,...). In many status-update systems (e.g., a sensor reporting temperature ), the update packets are only sent out sporadically and the packet size is quite small. Hence, the duration for transmitting a packet is much smaller than the difference between two subsequent update times. Motivated by this, we assume that the packet transmission time can be approximated as zero. With this assumption, the age at a status generation is zero, i.e. Δ(Zk)=0 for any k, and the age at any time t is:

The battery level before the (k+1)-st update instant is given by the following:

We first define the set of energy-causal update policies:

A policy π is said to be energy-causal if no update packet is sent out when the battery is empty, i.e., E(Zk)≥1 for all k≥1.

An energy-causal policy is said to be online if no update instant is determined based on future information, i.e., does not depend on future events, i.e., {Zk≤t}∈Ft for all t≥0 and k≥1.

Let Π denote the set of online update policies. The time-average expected age can be expressed as:

Let Xk represent the inter-update duration between updates k−1 and k, i.e., Xk=Zk−Zk−1. Then, the time-average expected age in (4) can be equivalently expressed as:

The goal of this paper is to find the optimal update policy for minimizing the time-average expected age, which is formulated as:

We begin with a result guaranteeing the existence of threshold-type policies that are optimal. We define such policies as follows:

where τℓ denotes the threshold for sending an update when the battery level is ℓ for ℓ=1,…,B.

Let ΠT⊂Π be the set of threshold policies. First, we note the following:

In our search for an optimal policy, we can reduce the space of policies further,

Let ΠMT be the set of monotone threshold policies. The following is true:

There exists a monotone threshold policy π∈ΠMT that solves (6).

Theorem 2 implies that in the optimal update policy, update packets are sent out more frequently when the battery level is high.

To understand the time evolution of Δ(t) and E(t) for policies in ΠMT, consider the illustration in Fig. 2. It can be seen from Fig. 2 that when Z+k=j, the next update of a policy π∈ΠMT occurs before than some time t′∈[Zk+τm,Zk+τm−1] if and only if there occur m−j energy arrivals before than t′. Accordingly, for policies in ΠMT

Hence, energy states sampled at update instants can be described as a DTMC with the transition probabilities in (9). When thresholds are finite, this DTMC is ergodic as any energy state is reachable from any other energy state with positive probability in B−1 steps.

Next, we show the main structural result satisfied by the thresholds of any optimal policy in ΠMT.

An optimal policy for solving (6) is a monotone threshold policy π∗=(τ∗1,…,τ∗B) that satisfies the following property: The threshold τ∗B for sending an update packet when the battery is full is equal to the minimum time-average expected age, i.e.,

This follows from the following two results:

The inter-update intervals, X, for any π∈ΠMT satisfy the following:

When B=2, the average age ¯Δ can be expressed as:

For battery sizes B=1,2,3,4,5, the policies in ΠMT are numerically optimized giving AoI versus energy arrival rate (Poisson) curves in Fig 3.

This paper explored the age-energy tradeoff for status updates sent by a finite-battery source that is charged intermittently by Poisson energy arrivals. The objective was to design a policy for the source to send updates to minimizing average status age using the given energy harvests, known and used in an online manner. A threshold policy is one that transmits when age exceeds a particular threshold for any battery state. It is shown that there is an online energy-causal threshold policy with monotone thresholds that optimally solves the problem. In particular, the smallest of the thresholds, the one used when the battery is full, has a value that matches the optimal average age.