Early detection of pulmonary cancer is the most promising way to enhance a patient's chance for survival. Accurate pulmonary nodule detection in computed tomography (CT) images is a crucial step in diagnosing pulmonary cancer. In this paper, inspired by the successful use of deep convolutional neural networks (DCNNs) in natural image recognition, we propose a novel pulmonary nodule detection approach based on DCNNs. We first introduce a deconvolutional structure to Faster Region-based Convolutional Neural Network (Faster R-CNN) for candidate detection on axial slices. Then, a three-dimensional DCNN is presented for the subsequent false positive reduction. Experimental results of the LUng Nodule Analysis 2016 (LUNA16) Challenge demonstrate the superior detection performance of the proposed approach on nodule detection(average FROC-score of 0.891, ranking the 1st place over all submitted results). 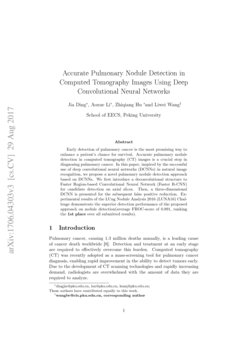 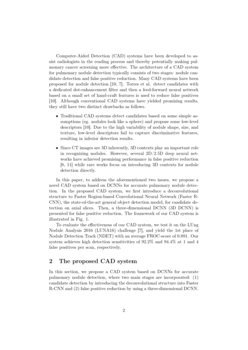 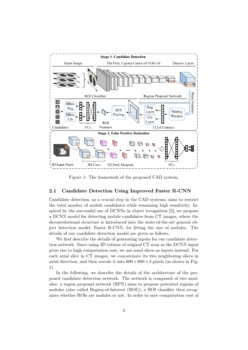 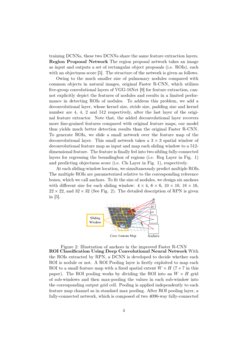 Pulmonary cancer, causing 1.3 million deaths annually, is a leading cause of cancer death worldwide [8]. Detection and treatment at an early stage are required to effectively overcome this burden. Computed tomography (CT) was recently adopted as a mass-screening tool for pulmonary cancer diagnosis, enabling rapid improvement in the ability to detect tumors early. Due to the development of CT scanning technologies and rapidly increasing demand, radiologists are overwhelmed with the amount of data they are required to analyze.

. Torres et al. detect candidates with a dedicated dot-enhancement filter and then a feed-forward neural network based on a small set of hand-craft features is used to reduce false positives

[10]. Although conventional CAD systems have yielded promising results, they still have two distinct drawbacks as follows.

In this paper, to address the aforementioned two issues, we propose a novel CAD system based on DCNNs for accurate pulmonary nodule detection. In the proposed CAD system, we first introduce a deconvolutional structure to Faster Region-based Convolutional Neural Network (Faster R-CNN), the state-of-the-art general object detection model, for candidate detection on axial slices. Then, a three-dimensional DCNN (3D DCNN) is presented for false positive reduction. The framework of our CAD system is illustrated in Fig. 1.

To evaluate the effectiveness of our CAD system, we test it on the LUng Nodule Analysis 2016 (LUNA16) challenge [7], and yield the 1st place of Nodule Detection Track (NDET) with an average FROC-score of 0.891. Our system achieves high detection sensitivities of 92.2% and 94.4% at 1 and 4 false positives per scan, respectively.

In this section, we propose a CAD system based on DCNNs for accurate pulmonary nodule detection, where two main stages are incorporated: (1) candidate detection by introducing the deconvolutional structure into Faster R-CNN and (2) false positive reduction by using a three-dimensional DCNN.

Candidate detection, as a crucial step in the CAD systems, aims to restrict the total number of nodule candidates while remaining high sensitivity. Inspired by the successful use of DCNNs in object recognition [5], we propose a DCNN model for detecting nodule candidates from CT images, where the deconvolutional structure is introduced into the state-of-the-art general object detection model, Faster R-CNN, for fitting the size of nodules. The details of our candidate detection model are given as follows.

We first describe the details of generating inputs for our candidate detection network. Since using 3D volume of original CT scan as the DCNN input gives rise to high computation cost, we use axial slices as inputs instead. For each axial slice in CT images, we concatenate its two neighboring slices in axial direction, and then rescale it into 600×600×3 pixels (as shown in Fig. 1).

In the following, we describe the details of the architecture of the proposed candidate detection network. The network is composed of two modules: a region proposal network (RPN) aims to propose potential regions of nodules (also called Region-of-Interest (ROI)); a ROI classifier then recognizes whether ROIs are nodules or not. In order to save computation cost of training DCNNs, these two DCNNs share the same feature extraction layers.

Region Proposal Network The region proposal network takes an image as input and outputs a set of rectangular object proposals (i.e. ROIs), each with an objectness score [5]. The structure of the network is given as follows.

Owing to the much smaller size of pulmonary nodules compared with common objects in natural images, original Faster R-CNN, which utilizes five-group convolutional layers of VGG-16Net [9]

for feature extraction, cannot explicitly depict the features of nodules and results in a limited performance in detecting ROIs of nodules. To address this problem, we add a deconvolutional layer, whose kernel size, stride size, padding size and kernel number are 4, 4, 2 and 512 respectively, after the last layer of the original feature extractor. Note that, the added deconvolutional layer recovers more fine-grained features compared with original feature maps, our model thus yields much better detection results than the original Faster R-CNN. To generate ROIs, we slide a small network over the feature map of the deconvolutional layer. This small network takes a

3×3 spatial window of deconvolutional feature map as input and map each sliding window to a 512-dimensional feature. The feature is finally fed into two sibling fully-connected layers for regressing the boundingbox of regions (i.e. Reg Layer in Fig. 1) and predicting objectness score (i.e. Cls Layer in Fig. 1), respectively.

At each sliding-window location, we simultaneously predict multiple ROIs. The multiple ROIs are parameterized relative to the corresponding reference boxes, which we call anchors. To fit the size of nodules, we design six anchors with different size for each sliding window: 4×4, 6×6, 10×10, 16×16, 22×22, and 32×32 (See Fig. 2). The detailed description of RPN is given in [5].

ROI Classification Using Deep Convolutional Neural Network With the ROIs extracted by RPN, a DCNN is developed to decide whether each ROI is nodule or not. A ROI Pooling layer is firstly exploited to map each ROI to a small feature map with a fixed spatial extent W×H (7×7 in this paper). The ROI pooling works by dividing the ROI into an W×H

grid of sub-windows and then max-pooling the values in each sub-window into the corresponding output grid cell. Pooling is applied independently to each feature map channel as in standard max pooling. After ROI pooling layer, a fully-connected network, which is composed of two 4096-way fully-connected layers, then map the fixed-size feature map into a feature vector. A regressor and a classifier based on the feature vector (i.e. BBox Reg and BBox Cls in Fig.

In the training process, by merging the RPN and ROI classifier into one network, we define the loss function for an image as follows.

respectively denote the predicted and true probability of anchor

i being a nodule. ^ti is a vector representing the 4 parameterized coordinates of the predicted bounding box of RPN, and t∗i is that of the ground-truth box associated with a positive anchor. In the same way, ~pj, p∗j, ^tj and t∗j denote the corresponding concepts in the ROI classifier. The detailed definitions of classification loss Lc and regression loss Lr are the same as the corresponding definitions in the literature [5].

). With the extracted nodule candidates, a 3D DCNN, which captures the full range of contexts of candidates and generates more discriminative features compared with 2D DCNNs, is utilized for false positive reduction. This network contains six 3D convolutional layers which are followed by Rectified Linear Unit (ReLU) activation layers, three 3D max-pooling layers, three fully connected layers, and a final 2-way softmax activation layer to classify the candidates from nodules to none-nodules. Moreover, dropout layers are added after max-pooling layers and fully-connected layers to avoid overfitting. We initialize the parameters of the proposed 3D DCNN by the same strategy using in the literature

[3]. The detailed architecture of the proposed 3D DCNN is illustrated in Fig. 3.

As for inputs of the proposed 3D DCNN, we firstly normalize each CT scan with a mean of -600 and a standard deviation of -300. After that, for each candidate, we use the center of candidate as the centroid and then crop a

40×40×24 patch. The strategy for data augmentation is given as follows.

In this section, we evaluate the performance of our CAD system on the LUNA16 Challenge [7]. Its dataset was collected from the largest publicly available reference database for pulmonary nodules: the LIDC-IDRI [2], which contains a total of 1018 CT scans. For the sake of pulmonary nodules detection, CT scans with slice thickness greater than 3 mm, inconsistent slice spacing or missing slices were excluded, leading to the final list of 888 scans. The goal of this challenge is to automatically detect nodules in these volumetric CT images.

In the LUNA16 challenge, performance of CAD systems are evaluated using the Free-Response Receiver Operating Characteristic (FROC) analysis [7]. The sensitivity is defined as the fraction of detected true positives divided by the number of nodules. In the FROC curve, sensitivity is plotted as a function of the average number of false positives per scan (FPs/scan). The average FROC-score is defined as the average of the sensitivity at seven false positive rates: 1/8, 1/4, 1/2, 1, 2, 4, and 8 FPs per scan.

We further present the comparison among top results on the leaderboard of LUNA16 Challenge111Until the submission of this paper, https://luna16.grand-challenge.org/results/, which is shown in Fig. 4. From this figure, we can observe that our model has attained the best performance among the CAD systems submitted in the task of nodule detection. Although ‘Ethan20161221’ and ‘20170227’ yield comparable performance when the number of FPs/scan is more than 2, however, they perform a significant drop with less than 2 FPs/scan, which limits their practicability in nodule detection. Moreover, Aidence trained its model using the labeled data on the NLST dataset [1], therefore, its result is actually incomparable to ours. Noted that, since most CAD systems used in clinical diagnosis have their internal threshold set to operate somewhere between 1 to 4 false positives per scan on average, our system satisfies clinical usage perfectly.

In this study, we propose a novel pulmonary nodule detection CAD system based on deep convolution networks, where a deconvolutional improved Faster R-CNN is developed to detect nodule candidates from axial slices and a 3D DCNN is then exploited for false positive reduction. Experimental results on the LUNA16 Nodule Detection Challenge demonstrate that the proposed CAD system ranks the 1st place of Nodule Detection Track (NDET) with an average FROC-score of 0.891. We believe that our CAD system would be a very powerful tool for clinal diagnosis of pulmonary cancer.