Nuclear segmentation is important and frequently demanded for pathology image analysis, yet is also challenging due to nuclear crowdedness and possible occlusion. In this paper, we present a novel bottom-up method for nuclear segmentation. The concepts of Center Mask and Center Vector are introduced to better depict the relationship between pixels and nuclear instances. The instance differentiation process are thus largely simplified and easier to understand. Experiments demonstrate the effectiveness of Center Vector Encoding, where our method outperforms state-of-the-arts by a clear margin. 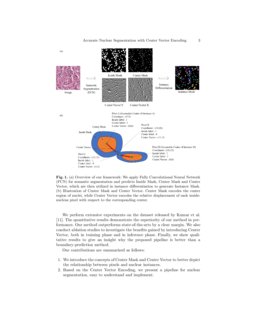 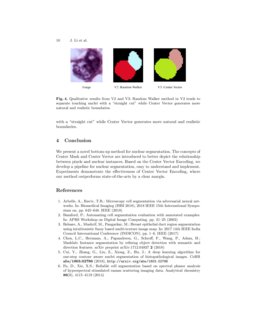 Pathology has long been regarded as the gold standard for medical diagnosis, especially cancer-related diagnosis. Nuclear segmentation is one of the most important and frequently demanded tasks of pathology image analysis, acting as the building block for nuclear statistical analysis such as size, density, counts, etc., which in turn contribute to cancer grading, therapy planning and outcome prediction. On the other hand, nuclear segmentation is laborious, tedious, and prone to errors for manual processing, and challenging for automatic methods due to nuclear crowdedness and possible occlusion.

Nuclear segmentation aims to segment out the nuclear areas from the backgrounds, as well as differentiate nuclear instances. The task can be well formulated as an instance segmentation problem. For the instance segmentation problem, there are two main frameworks, namely top-down and bottom-up. The top-down framework begins by localizing object instances, commonly in the form of bounding boxes, and then performs the segmentation within the bounding box. Mask R-CNN and its variants [9, 13, 4] are of the state-of-the-art top-down models. The bottom-up framework, on the contrary, performs the semantic segmentation on the whole image firstly, and differentiate instances with post-processing based on prior knowledge about the objects [3, 5, 19, 8]. With the incorporation of prior knowledge, the bottom-up methods are challenging to design, but may perform better than general-purpose top-down counterparts.

proposed a two-class Convolutional Neural Network (CNN) based method for the first-step semantic segmentation that predicts inside and outside mask, and differentiate nuclear instances by carefully-designed distance transform and region growth. However, the method suffers from under-segmentation, especially for crowded nuclei. As a follow-up, Kumar et al.

extended the model to a three-class CNN, which predicts boundary mask in addition to inside and outside mask. They also proposed an anisotropic region growth method for instance differentiation, based on estimated probabilities in the three masks. Despite the decent improvement compared with Xing et al.

In this paper, we propose a novel method for nuclear segmentation that overcomes the aformentioned shortcomings. As shown in Fig. 1, our method begins by Fully Convolutional Neural Network (FCN) [14, 15] for semantic segmentation. Instead of predicting boundaries, our method estimates the Center Mask, Center Vector, as well as the common Inside Mask. The Center Mask encodes the center regions of nuclei, the target of which during training is generated by morphological operations and distance thresholding. The Center Vector, on the other hand, encodes for each inside-nucleus pixel the relative displacement with respect to the centers. It contains two channels, for horizontal and vertical directions respectively. During inference, the center region of each nuclear instance is firstly derived by applying connected component analysis to the predicted Center Mask, and then each inside-nucleus pixel (predicted by Inside Mask after some processing) is assigned to a center region according to the predicted Center Vector. Pixels with Center Vector not pointing to any center region are assigned to the nearest center region. Finally we refine the Instance Mask, for example filling the holes, to remove the artifacts.

Compared with Kumar et al. [11], the concept of Center Vector in our method takes into consideration the distance with respect to the centers, instead of the dichotomous boundary labels, so we utilize more information for the model to separate touching nuclei. Also, our method is less sensitive to the annotations. For slighted perturbed annotations, only a tiny fraction of Center Vector targets will be affected, and the model can still learn well based on the majority of correct supervisions. Lastly, the Center Vector guides the pixels to find its center. The relationship between pixels and nuclear instances is clear with the concept of Center Vector. The process is straightforward, easier to understand and implement.

We perform extensive experiments on the dataset released by Kumar et al. [11]. The quantitative results demonstrate the superiority of our method in performance. Our method outperforms state-of-the-arts by a clear margin. We also conduct ablation studies to investigate the benefits gained by introducing Center Vector, both in training phase and in inference phase. Finally, we show qualitative results to give an insight why the proposed pipeline is better than a boundary-prediction method.

For pixels not belonging to any nuclear instance, i.e. the backgrounds, the Center Vector is not defined, and the corresponding loss is ignored during training. See Fig. 1(b) for an illustration of the concepts of Center Mask and Center Vector.

Compared with boundary encoding [11], the Center Vector encodes the distance between pixels and centers instead of the dichotomous boundary labels, and thus contains richer information. The Center Vector is smooth inside a nuclear instance, making it easier for the model to learn, but changes sharply in the boundary areas, especially in the boundary of touching nuclei, forcing the model to pay more attention to the boundaries. Moreover, Center Vector is less sensitive to the annotation perturbation. Even if annotation areas are slightly enlarged or reduced, for example due to different annotation styles by different annotators, only a tiny fraction of Center Vector targets will be affected, and the model can still learn well based on the majority of correct supervision.

Finally, the Inside Mask simply contains all the foreground pixels – pixels within the overall region of some nuclear instance. For an input image, the Inside Mask and Center Mask are of the same shape as the image, with 1 channel each in the semantic segmentation output; Center Vector contains 2 channels for horizontal and vertical directions respectively, and is also of the same shape as the input image.

For the loss function, we utilize a combination of pixel-wise cross entropy (CE) loss and Intersection-Over-Union (IOU) loss for the optimization of Inside Mask (IM) and Center Mask (CM) estimation. For Center Vector (CV, with

CVX and CVY for two directions) with continuous target values, we apply pixel-wise mean square (MS) loss. Please see (2), (3), and (4) for detailed formulations, where yi and pi are targets and predictions for pixel i respectively, i.e., class labels/probabilities for CE and IOU loss but distance targets/estimations for MS loss. Finally, the total loss is a weighted summation of all the aformentioned losses, as shown in (5), where α , β , γ are the balancing parameters.

We use DLA-34 for the model. The model is implemented in Pytorch 0.4. We train the model for 2000 epochs. Using SGD as the optimizer, learning rate is initially set as 0.01 and decayed polynomially. Batchsize is 4 and weight decay is 0.0001. In loss function we set

We perform extensive experiments on the dataset released by Kumar et al. [11] to evaluate the proposed method. The dataset consists of 30 Hematoxylin and Eosin (H&E) stained images, all of which are of the size 1000×1000 pixels. Nuclear instances are carefully annotated so as to generate the instance mask for each image. The images come from multiple organs: 4 organs (breast, kidney, liver and prostate) have 6 images each, while another 3 organs (bladder, colon and stomach) have 2 images each. Following the same principle as Kumar et al. [11], that is test data must contain images from organs never seen in train data, we sample 4 images from each of 4 majority-class organs (breast, kidney, liver and prostate), a set of 16 images in total for training and put the rest for test. The multi-organ diversity and zero-shot setting make the problem even more challenging, but closer to clinical practice.

[11]. AJI penalizes both segmentation errors and instance differentiation errors, and is a balancing metric for a comprehensive evaluation. We summarize the AJI calculation steps listed in [11] as the equation (6), where {Gi}Mi=1 and {Pj}Nj=1 denote the set of annotated nuclei and predicted nuclei, respectively; f(i)=argmaxj|Gi⋂Pj|/|Gi⋃Pj| assigns best-match prediction to each annotated nuclear instance; [N]={1,2,...,N} and f([N])={f(1),f(2),...,f(N)} are convenient notations.

To investigate the error modes, we also apply two metrics originally designed for the semantic segmentation task: Intersection-Over-Union (IOU) and Dice. Please refer to (7) and (8) for detailed formulations, where G=⋃Mi=1Gi and P=⋃Nj=1Pj are the global annotations and predictions, respectively. Note that IOU is the upper bound of AJI: We have

Dice is yet the upper bound of IOU. As a result, the metrics IOU and Dice can be used for distinguishing instance differentiation errors from segmentation errors.

In Table 1 we show the performance comparison of our method against state-of-the-art methods: CNN2 [21] for two-class CNN (Inside, Outside) and CNN3 [11] for three-class CNN (Inside, Outside, Boundary). We omit IOU scores since they are not reported in the literature. From the comparison it is clear to see that our method outperforms the state-of-the-arts by a large margin, both with respect to the instance-level AJI metric and with respect to the segmentation-level Dice metric.

We also perform ablation studies to investigate the benefits gained from the design. We train the semantic segmentation model to predict Inside Mask and Center Mask only, and differentiate instances by Random Walker [7] seeded with center regions derived from Center Mask predictions. We term this setting as V1. Further for the setting V2, we add Center Vector supervisions during training, but we ignore the Center Vector output during inference and also apply Random Walker [7]. In this case, Center Vector serves as a way to facilitate training. Finally the setting V3 is the entire method we describe above, where Center Vector is utilized both in training and during inference.

Table 2 shows the results of ablation studies. We add results from CNN3 [11] for comparison. The performance gain of V1 from CNN3 [11] mainly attributes to the better Deep Layer Aggregation (DLA) [23] architecture. Comparing V1, V2 and V3, the AJI score is increasing, which demonstrates the effectiveness of Center Vector, both in training and during inference. However, the IOU and Dice scores are largely comparable for V1, V2 and V3, showing that Center Vector works mainly from suppressing errors in the instance differentiation step.

We also display some qualitative results to give an insight why Center Vector is effective, as shown in Fig. 3 and Fig. 4. Fig. 3 compares qualitative results from V1 and V2. The V2 model, with Center Vector during training, learns to better separate touching nuclei in the Center Mask, showing that Center Vector supervision guides the model to concentrate more in the center regions and learn better Center Mask estimation. On the other hand, Fig. 4 compares V2 with V3, where the models differ only in the instance differentiation step. It can be seen that Random Walker method in V2 tends to separate touching nuclei with a “straight cut” while Center Vector generates more natural and realistic boundaries.