Machine-type communications (MTC) devices in 5G will use the Non-orthogonal multiple access (NOMA) technology for massive connections. These devices switch between the transmission mode and the sleep mode for battery saving; and their applications may have diverse quality of service (QoS) requirements. In this paper, we develop a new uplink energy-efficient power control scheme for multiple MTC devices with the above mode transition capability and different QoS requirements. By using the effective bandwidth and the effective capacity models, the system's energy efficiency can be formulated as the ratio of the sum effective capacity to the sum energy consumption. Two new analytical models are used in system's energy efficiency maximization problem: 1) two-mode circuitry model and 2) accurate delay-outage approximation model. Simulation shows our proposed scheme is capable of providing exact delay QoS guarantees for NOMA systems. 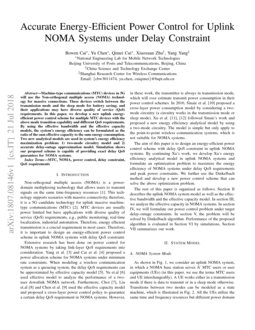 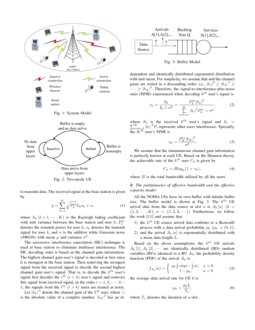 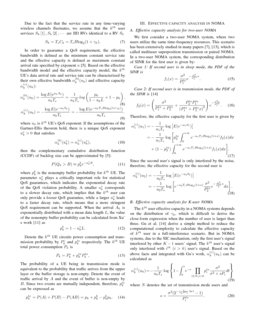 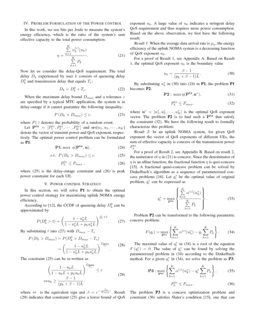 Extensive research has been done on power control for NOMA systems by taking link-layer QoS requirements into consideration. Yang et al. [3] and Cai et al. [4] proposed a power allocation scheme for NOMA systems under minimum rate constraints. When modeling a wireless communication system as a queueing system, the delay QoS requirements can be approximated by effective capacity model [5]. Yu et.al [6] used effective model to analyze the performance of a two-user downlink NOMA network. Furthermore, Choi [7], Liu et.al [8] and Chen et al. [9] used the effective capacity model and proposed a cross-layer power control policy to guarantee a certain delay QoS requirement in NOMA systems. However, in these work, the transmitter is always in transmission mode, which will over estimate transmit power consumption in their power control schemes. In 2016, Sinaie et al. [10] proposed a cross-layer power consumption model by considering a two-mode circuitry (a circuitry works in the transmission mode or sleep mode). Xu et al. [11], [12] followed Sinaie’s work and proposed a new energy efficiency analytical model by using a two-mode circuitry. The model is simple but only apply to the point-to-point wireless communication systems, which is not suitable for NOMA systems.

The aim of this paper is to design an energy-efficient power control scheme with delay QoS constraint in uplink NOMA systems. By continuing Xu’s work, we develop Xu’s energy efficiency analytical model in uplink NOMA systems and formulate an optimization problem to maximize the energy efficiency of NOMA systems under delay QoS requirements and peak power constraints. We further use the Dinkelbach method and develop a new power control scheme that can solve the above optimization problem.

As shown in Fig. 1, we consider an uplink NOMA system, in which a NOMA base station serves K MTC users or user equipments (UEs) (in this paper, we use the terms MTC users and UE interchangeably). A UE works either in a transmission mode if there is data to transmit or in a sleep mode otherwise. Transitions between two modes can be modeled as a state machine, which is illustrated in Fig. 2. All the UEs utilize the same time and frequency resources but different power domain to transmit data. The received signal at the base station is given by

Let |hk|2 denote the channel gain of the kth user, where |⋅| is the absolute value of a complex number. |hk|2

has an independent and identically distributed exponential distribution with unit mean. For simplicity, we assume that and the channel gains are sorted in a descending order, i.e.,

where Sk is the received kth user’s signal and Ik=∑Ki=k+1|hi|2Pi represents other users interference. Specially, the Kth user’s SINR is

We assume that the instantaneous channel gain information is perfectly known at each UE. Based on the Shannon theory, the achievable rate of the kth user Ck is given by

where B is the total bandwidth utilized by all the users.

Based on the above assumptions, the kth UE arrivals Ak[1],Ak[2],⋯

; the probability density function (PDF) of the arrival

the average data arrival rate for UE k is

where Ts denotes the duration of a slot.

Due to the fact that the service rate in any time-varying wireless channels fluctuates, we assume that the kth user services Sk[1],Sk[2],⋯ are IID RVs identical to a RV Sk

where uk is kth UE’s QoS exponent. If the assumptions of the Gartner-Ellis theorem hold, there is a unique QoS exponent u∗k>0 that satisfies

then the complementary cumulative distribution function (CCDF) of backlog size can be approximated by [5]:

where pbk is the nonempty buffer probability for kth UE. The parameter u∗k plays a critically important role for statistical QoS guarantees, which indicates the exponential decay rate of the QoS violation probability. A smaller u∗k corresponds to a slower decay rate, which implies that the kth user can only provide a looser QoS guarantee, while a larger u∗k leads to a faster decay rate, which means that a more stringent QoS requirement can be supported. When the arrival Ak is exponentially distributed with a mean data length L, the value of the nonempty buffer probability can be calculated from Xu’ s work [11] as

We first consider a two-user NOMA system, where two users utilize the same time-frequency resources. This scenario has been extensively studied in many papers [7], [13], which is called multiuser superposition transmission or paired NOMA. In a two-user NOMA system, the corresponding distribution of SINR for the first user is given by:

Case 1: If second user is in sleep mode, the PDF of the SINR is

Case 2: If second user is in transmission mode, the PDF of the SINR is [14]

Therefore, the effective capacity for the first user is given by

The kth user effective capacity in a NOMA systems depends on the distribution of γk, which is difficult to derive the close-form expression when the number of user is larger than three. Gu et al. [14] derive a simple method to reduce the computational complexity to calculate the effective capacity of kth user in a full-interference scenario. But in NOMA systems, due to the SIC mechanism, only the first user’s signal interfered by other K−1 users’ signal. The kth user’s signal only interfered with ith (i>k) user’s signal. Based on the above facts and integrated with Gu’s work, α(c)k(uk) can be calculated as

where N denotes the set of transmission mode users and

In this work, we use bits per Joule to measure the system’s energy efficiency, which is the ratio of the system’s sum effective capacity to the total power consumption:

When the maximum delay bound Dmax and a tolerance ε are specified by a typical MTC application, the system is in delay-outage if it cannot guarantee the following inequality:

where P(⋅) denotes the probability of a random event.

] denote the vector of transmit power and QoS exponent, respectively. The optimal power control problem can be formulated as

where (25) is the delay-outage constraint and (26) is peak power constraint for each UE.

In this section, we will solve P1 to obtain the optimal power control strategy for maximizing uplink NOMA energy efficiency.

According to [12], the CCDF of queueing delay Dqk can be approximated by

By substituting t into (27) with Dmax−Ts

The constraint (25) can be re-written as

where ⇔ is the equivalent sign and β=ε−TsDmax . Result (29) indicates that constraint (25) give a lower bound of QoS exponent uk. A large value of uk indicates a stringent delay QoS requirement and thus requires more power consumption. Based on the above observation, we first have the following result:

Result 1: When the average data arrival rate is μk, the energy efficiency of the uplink NOMA system is a decreasing function of QoS exponent uk.

For a proof of Result 1, see Appendix A. Based on Result 1, the optimal QoS exponent uk is the boundary value

where u∗=[u∗1,u∗2,⋯,u∗K] is the optimal QoS exponent vector. The problem P2 is to find such a Ptx that satisfy the constraint (32). We have the following result to formally characterize this problem:

Result 2: In an uplink NOMA system, for given QoS exponent the vector of QoS exponents of different UEs, the sum of effective capacity is concave of the transmission power Ptxk.

For a proof of Result 2, see Appendix B. Based on result 2, the numerator of η in (21) is concave. Since the denominator of η is an affine function, the fractional function η is qusi-concave [15]. A fractional quasi-concave problem can be solved by Dinkelbach’s algorithm as a sequence of parameterized concave problems [16]. Let q∗i be the optimal value of original problem, q∗i can be expressed as

Problem P2 can be transformed to the following parametric concave problem:

The maximal value of q∗i in (34) is a root of the equation F(q∗i)=0. The value of q∗i can be found by solving the parameterized problem in (34) according to the Dinkelbach method. For a given q∗i in (34), we solve the problem as P3:

The problem P3 is a concave optimization problem and constraint (36) satisfies Slater’s condition [15], one that can be efficiently solved by the Lagrange dual method. The Lagrangian function of problem P3 can be written as

By using the Lagrange dual decomposition, the maximization problem can be solved by differentiating L(Ptxk,λk)with Ptxk. We denote the optimal power control by Ptx∗k. The Karush–Kuhn–Tucker (KKT) conditions for P3 are given by

where (⋅)∗ represents the value of corresponding variable at the optimal point. Equation (39) and (40) are feasibility conditions, (41) is the complementary slackness condition, and (42) is the stationary condition. The optimal power Ptx∗k can be solved as

where [x]+ denotes max{x,0} and λ∗k is the optimal Lagrangian multiplier, which need to ensure the system to meet the peak power constraint of each UE.

As for minimization problem, the multiplier λ∗k can be updated by the subgradient method [15] as follows:

where j is the iteration index, βk(j) is the positive step sizes for the jth iteration (e.g., 1√j). When the step sizes are chosen properly, the convergence to the optimal solution is guaranteed.

In this section, we evaluate the performance of the proposed algorithm in Rayleigh fading environment [17]. The channel gain |hk|2 is generated by exponential distribution with parameter χk=dβk [18], where dk is the distance between the kth user and the base station, β denotes the path loss exponent and we set β=4. Three different QoS requirements UEs are in a NOMA cell. The distance between base station and three users are 300, 600 and 900 meters, respectively. The other parameters are listed in Table I.

Fig. 4 shows the simulated and approximated of average delay violation probability for different UEs when the all the UEs average date rates are 600 Kbps. The delay QoS requirements for three UEs are set as (10ms, 0.1), (20ms, 0.1) and (30ms, 0.1) respectively. As shown in Fig. 4, the approximation results are very close to the simulation results. This verifies the correctness of delay-outage probability and indicates that our power control scheme is capable of providing precise delay-outage probability guarantees.