This paper proposes highly accurate closed-form approximations to channel distributions of two different reconfigurable intelligent surface (RIS)-based wireless system setups, namely, dual-hop RIS-aided (RIS-DH) scheme and RIS-aided transmit (RIS-T) scheme. Differently from previous works, the proposed approximations reveal to be very tight for arbitrary number N of reflecting metasurface's elements. Our findings are then applied to the performance analysis of the considered systems, in which the outage probability, bit error rate, and average channel capacity are derived. Results show that the achievable diversity orders G_d for RIS-DH and RIS-T schemes are N-1<G_d<N and N, respectively. Furthermore, it is revealed that both schemes can not provide the multiplexing gain and only diversity gains are achieved. For the RIS-DH scheme, the channels are similar to the keyhole multiple-input multiple-output (MIMO) channels with only one degree of freedom, while the RIS-T scheme is like the transmit diversity structure. 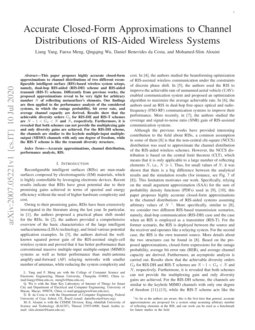 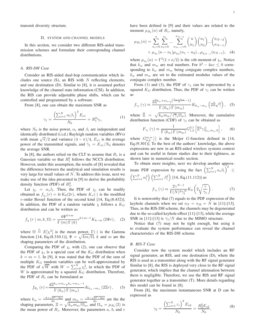 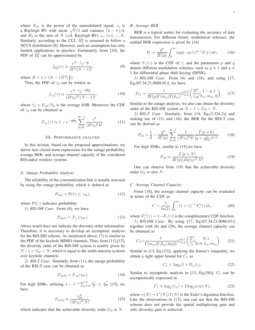 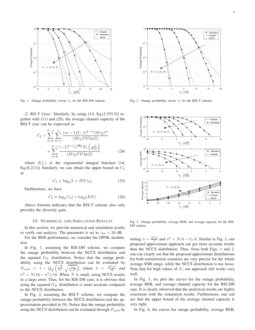 In this paper, we study the statistical characterization and modeling of...
Tri Nhu Do, et al. ∙

Outage and Finite-SNR DMT Analysis for IRS-aided MIMO Systems: How Large IRSs Need to Be?

We consider the extra degree of freedom offered by the rotation of the r...
Yajun Cheng, et al. ∙

In this paper, we introduce a theoretical framework for analyzing the pe...
Alexandros-Apostolos A. Boulogeorgos, et al. ∙

Reconfigurable intelligent surfaces (RISs) are man-made surfaces composed by electromagnetic (EM) materials, which is highly controllable by leveraging electronic devices. Recent results indicate that RISs have great potential due to their promising gains achieved in terms of spectral and energy efficiency without the need of higher hardware complexity and cost.

Owing to their promising gains, RISs have been extensively investigated in the literature along the last year. In particular, in [1], the authors proposed a practical phase shift model for the RISs. In [2], the authors provided a comprehensive overview of the basic characteristics of the large intelligent surface/antenna (LISA) technology, and listed various potential application examples. In [3], the authors derived the well-known squared power gain of the RIS-assisted single-cell wireless system and proved that it has better performance than conventional massive multiple-input multiple-output (MIMO) systems as well as better performance than multi-antenna amplify-and-forward (AF) relaying networks with smaller number of antennas, while reducing the system complexity and cost. In [4], the authors studied the beamforming optimization of RIS-assisted wireless communication under the constraints of discrete phase shift. In [5], the authors used the RIS to improve the achievable rate of unmanned aerial vehicle (UAV)-enabled communication system and proposed an optimization algorithm to maximize the average achievable rate. In [6], the authors used an RIS in dual-hop free-space optical and radio-frequency (FSO-RF) communication systems to improve their performance. More recently, in [7], the authors studied the coverage and signal-to-noise ratio (SNR) gain of RIS-assisted communication systems.

Although the previous works have provided interesting contribution to the field about RISs, a common assumption in some of them [8] is that the non-central chi-square (NCCS) distribution was used to approximate the channel distribution of the RIS-aided wireless schemes. However, the NCCS distribution is based on the central limit theorem (CLT), which means that it is only applicable to a large number of reflecting elements

, it was shown that there is a big difference between the analytical results and the simulation results (for instance, see Fig. 7 of [8]). This limitation motivates our work. Specifically, relying on the small argument approximation (SAA) for the sum of probability density functions (PDFs) used in [9], [10], this paper proposes highly accurate closed-form approximations to the channel distributions of RIS-aided systems assuming arbitrary values of

N 111As far as the authors are aware, this is the first time that general, accurate approximations are proposed for a system setup assuming arbitrary number of reflecting elements at the RIS, and our work can be used as a benchmark for future studies in the field

. More specifically, similar to [8], we consider two different RIS-based transmission scenarios, namely, dual-hop communication (RIS-DH) case and the case when an RIS is employed as a transmitter (RIS-T). For the former scenario, the RIS is deployed between the source and the receiver and operates like a relaying system. For the second case, the RIS is the own transmit source. More details about the two structures can be found in [8]. Based on the proposed approximations, closed-form expressions for the outage probability, average bit error rate (BER), and average channel capacity are derived. Furthermore, an asymptotic analysis is carried out. Results show that the achievable diversity orders

Gd for RIS-DH and RIS-T schemes are N−1<Gd<N and N, respectively. Furthermore, it is revealed that both schemes can not provide the multiplexing gain and only diversity gains are achieved. For the RIS-DH scheme, the channels are similar to the keyhole MIMO channels with only one degree of freedom [11]-[13], while the RIS-T scheme acts like the transmit diversity structure.

In this section, we consider two different RIS-aided transmission schemes and formulate their corresponding channel distributions.

Consider an RIS-aided dual-hop communication which includes one source (S), an RIS with N reflecting elements, and one destination (D). Similar to [8], it is assumed perfect knowledge of the channel state information (CSI). In addition, the RIS can provide adjustable phase shifts, which can be controlled and programmed by a software.

From [8], one can obtain the maximum SNR as

where N0 is the noise power, αi and βi

In [8], the authors relied on the CLT to assume that R1 is a Gaussian variable so that R21 follows the NCCS distribution. However, under this assumption, the results of [8] revealed that the difference between the analytical and simulation results is very large for small values of N. To address this issue, next we make use of the idea presented in [9] to derive the probability density function (PDF) of R21.

Let χi=αiβi. Then, the PDF of χi can be readily obtained as fχi(r)=4rK0(2r), where Kv(⋅) is the modified v-order Bessel function of the second kind [14, Eq.(8.432)]. In addition, the PDF of a random variable χ follows a KG distribution and can be written as

where μχi(n)=Γ2(1+n/2) is the nth moment of χi. Notice that kw and mw are real numbers. For b2−4ac≤0 corresponding to kw and mw being conjugate complex numbers, kw and mw

are set to the estimated modulus values of the conjugate complex number.

γ1 can be obtained as

where Gm,np,q[⋅] is the Meijer G-function defined in [14, Eq.(9.301)]. To the best of the authors’ knowledge, the above expressions are new in an RIS-aided wireless systems context and can be useful in future studies due to their tightness, as shown later in numerical results section.

Notice that (7) may not be tight enough, but using it to evaluate the system performance can reveal the channel characteristics of the RIS-DH scheme.

From [8], the maximum instantaneous SNR at D can be expressed as

where Es2 is the power of the unmodulated signal, εi is a Rayleigh RV with mean √π/2 and variance (4−π)/4, and R2 is the sum of N i.i.d. Rayleigh RVs εi, i=1,...,N. Similarly, according to the CLT, R22 is assumed to follow a NCCS distribution [8]. However, such an assumption has only limited applications in practice. Fortunately, from [10], the PDF of R22 can be approximated by

Thus, the PDF of γ2 can be written as

where ¯γ2=Es2/N0 is the average SNR. Moreover, the CDF of γ2 can be obtained as

In this section, based on the proposed approximations, we derive new closed-form expressions for the outage probability, average BER, and average channel capacity of the considered RIS-aided wireless systems.

The reliability of the communication link is usually assessed by using the outage probability, which is defined as

Above result does not indicate the diversity order information. Therefore, it is necessary to develop an asymptotic analysis for the RIS-DH scheme. As mentioned above, (7) is similar to the PDF of the keyhole MIMO channels. Thus, from [11],[12], the diversity order of the RIS-DH system is readily given by N−1<Gd<N, which is equal to the multi-antenna systems over keyhole channels.

Similarly, from (11), the outage probability of the RIS-T case can be obtained as

which indicates that the achievable diversity order Gd is N.

BER is a typical metric for evaluating the accuracy of data transmission. For different binary modulation schemes, the unified BER expression is given by [16]

where Fγ(γ) is the CDF of γ, and the parameters p and q denote different modulation schemes, such as p = 1 and q = 1 for differential phase shift keying (DPSK).

Similar to the outage analysis, we also can obtain the diversity order of the RIS-DH system as N−1<Gd<N.

One can observe from (19) that the achievable diversity order Gd is also N.

From [18], the average channel capacity can be evaluated in terms of the CDF as

where Fγc(γ)=1−Fγ(γ) is the complimentary CDF function.

Similar to asymptotic analysis in [13, Eq.(38)], C1 can be asymptotically expressed as

where ψ(N)=Γ′(N)/Γ(N) is the Euler’s digamma function. Like the observations in [13], one can see that the RIS-DH scheme does not provide the spatial multiplexing gain and only diversity gain is achieved.

Above formula indicates that the RIS-T scheme also only provides the diversity gain.

In this section, we provide numerical and simulation results to verify our analysis. The parameter is set to γth=20 dB.

For the BER performance, we consider the DPSK modulation.

In Fig. 4, the curves for outage probability, average BER, and average capacity are depicted for the RIS-T case. As expected, the simulation results are consistent with the analytical results. Similar observations obtained in Fig. 3 apply here as well. From both Figs. 3 and 4, one can see that the slope of the capacity curves are kept to a constant regardless of the value of N. The reason is that both schemes only provide diversity gain.

In Fig. 5, by setting ¯γ1=¯γ2=¯γ, we plot the BER curves for both schemes. As expected, it is observed that the RIS-DH scheme has a smaller diversity order compared to the RIS-T scheme, which verifies our asymptotic analysis.

In this work, we developed two novel statistical distributions to approximate the channel distributions of the RIS-aided wireless systems which generalize existing result based on NCCS distribution. Then, outage probability, average BER, and average capacity were derived in closed-form. Simulation results showed that the proposed distributions perform better than the NCCS distribution. Moreover, it was shown that the achievable diversity orders Gd for RIS-DH and RIS-T schemes are N−1<Gd<N and N, respectively. Furthermore, both of the schemes can not provide the multiplexing gain and only diversity gains are achieved. As a potential future work, line-of-sight scenarios that are commonly modeled by Rician fading can be taken into account, in which a totally new approximate approach would need to be proposed.