Although convolutional neural networks (CNNs) are now widely used in various computer vision applications, its huge resource demanding on parameter storage and computation makes the deployment on mobile and embedded devices difficult. Recently, binary convolutional neural networks are explored to help alleviate this issue by quantizing both weights and activations with only 1 single bit. However, there may exist a noticeable accuracy degradation when compared with full-precision models. In this paper, we propose an improved training approach towards compact binary CNNs with higher accuracy. Trainable scaling factors for both weights and activations are introduced to increase the value range. These scaling factors will be trained jointly with other parameters via backpropagation. Besides, a specific training algorithm is developed including tight approximation for derivative of discontinuous binarization function and L_2 regularization acting on weight scaling factors. With these improvements, the binary CNN achieves 92.3 ImageNet, our method also obtains 46.1 with Resnet-18 surpassing previous works. 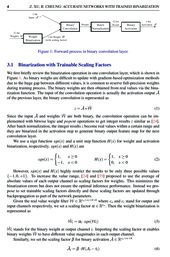 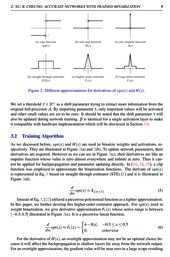 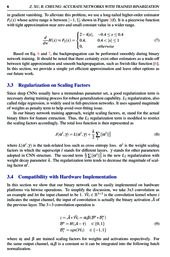 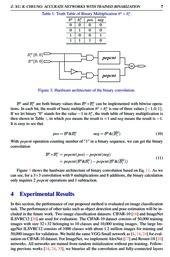 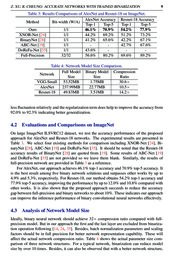 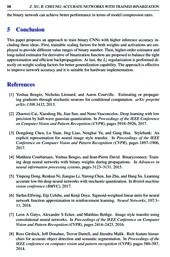 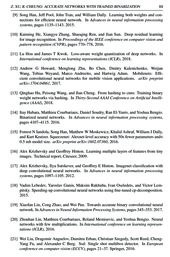 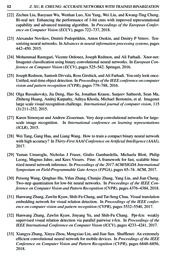 Furthermore, as an extreme case of parameter quantization, binary convolutional neural networks quantize both weights and activations with 1 bit [Hubara et al.(2016)Hubara, Courbariaux, Soudry, El-Yaniv, and Bengio, Rastegari et al.(2016)Rastegari, Ordonez, Redmon, and Farhadi]. It has attracted large research interests because binary CNNs can reduce network size by 32 times compared with full precision and replace the multiplication with bitwise logic operations. As a result, binary CNNs are suitable for accelerator implementations on hardware platforms such as FPGA [Umuroglu et al.(2017)Umuroglu, Fraser, Gambardella, Blott, Leong, Jahre, and Vissers]. However, network binarization may decrease accuracy noticeably due to extremely limited precision. It is still a challenge and needs further exploration towards better inference performance.

In this paper, an improved training approach for binary CNNs is proposed which is easy to be implemented on hardware platforms. Our approach includes three novel ideas:

’s idea with sparse quantization. Besides, they proposed a two-step quantization framework: code learning and transformation function learning. In code learning step, weights were of full-precision and activations were quantized based on Gaussian distribution and sparse constraint. Then the weights binarization was solved as a non-linear least regression problem in the second step. In

Complete binarization methods: Although weight-only binarization methods already save much memory resources and reduce multiplications, further binarization on activation can transfer arithmetic to bit-wise logic operations enabling fast inference on embedded devices. As far as our knowledge goes, [Hubara et al.(2016)Hubara, Courbariaux, Soudry, El-Yaniv, and Bengio] was the first work binarizing both weights and activations to -1 and +1. The work obtained 32 times compression ratio on weights and 7 times faster inference speed with comparative results to BinaryConnect on small datasets like CIFAR-10 and SVHN. However, later results showed that this training method was not suitable for large datasets with obvious accuracy degradation. Later Rastegari et al [Rastegari et al.(2016)Rastegari, Ordonez, Redmon, and Farhadi] proposed XNOR-Net to improve the inference performance on large-scale datasets. It achieved better trade-off between compression ratio and accuracy in which scaling factors for both weights and activations were used to minimize the quantization errors. DoReFa-Net [Zhou et al.(2016)Zhou, Wu, Ni, Zhou, Wen, and Zou] proposed by Zhou et alinherited the idea of XNOR-Net and provided a complete solution for low-bit quantization and binarization of weights, activations and gradients.

[Lin et al.(2017)Lin, Zhao, and Pan], Lin et alproposed ABC-Net towards accurate binary convolutional neural network. Unlike other approaches, they proposed to use the linear combination of multiple binary weights and binary activations for better approximation of full-precision weights and activations. With adequate bases, the structure could finally achieve close results to full-precision networks. In recent work [Liu et al.(2018)Liu, Wu, Luo, Yang, Liu, and Cheng], Liu et alproposed Bi-Real Net in which the real activations are added to the binary activations through a shortcut connection to increase the representational capability. Moreover, they provided a tight approximation of sign function and proposed to pre-train full-precision neural networks as the initialization for binary network training.

Training an accurate binary CNN has two major challenges: one is the extremely limited value range because of binary data, another is the difficult backpropagation in training procedure caused by the derivative of binarization function. In this section, the proposed binary CNN training approach is introduced in order to address the above two issues.

We first briefly review the binarization operation in one convolution layer, which is shown in Figure 1. As binary weighs are difficult to update with gradient-based optimization methods due to the huge gap between different values, it is common to reserve full-precision weights during training process. The binary weights are then obtained from real values via the binarization function. The input of the convolution operation is actually the activation output ~A of the previous layer, the binary convolution is represented as

Since the input ~A and weights ~W are both binary, the convolution operation can be implemented with bitwise logic and popcnt operations to get integer results z similar as [Rastegari et al.(2016)Rastegari, Ordonez, Redmon, and Farhadi]

. After batch normalization, the integer results

z become real values within a certain range and they are binarized in the activation step to generate binary output feature map for the next convolution layer.

We use a sign function sgn(x) and a unit step function H(x) for weight and activation binarization, respectively. sgn(x) and H(x) are

However, sgn(x) and H(x) highly restrict the results to be only three possible values {−1,0,+1}. To increase the value range, [Rastegari et al.(2016)Rastegari, Ordonez, Redmon, and Farhadi] and [Zhou et al.(2016)Zhou, Wu, Ni, Zhou, Wen, and Zou] proposed to use the average of absolute values of each output channel as scaling factors for weights. This minimizes the binarization errors but does not ensure the optimal inference performance. Instead we propose to set trainable scaling factors directly and these scaling factors are updated through backpropagation as part of the network parameters.

Given the real value weight filter W∈Rco×ci×k×k where co and ci stand for output and input channels respectively, we set a scaling factor α∈Rco. Then the weight binarization is represented as

We set a threshold τ∈Rco as a shift parameter trying to extract more information from the original full-precision A. By importing parameter τ, only important values will be activated and other small values are set to be zero. It should be noted that the shift parameter τ will also be updated during network training. β is identical for a single activation layer to make it compatible with hardware implementation which will be discussed in Section 3.4.

As we discussed before, sgn(x) and H(x) are used to binarize weights and activations, respectively. They are illustrated in Figure 2(a) and 2(b). To update network parameters, their derivatives are required. However as we can see in Figure 2(c), their derivatives are like an impulse function whose value is zero almost everywhere and infinite at zero. Thus it cannot be applied for backpropagation and parameter updating directly. In [Hubara et al.(2016)Hubara, Courbariaux, Soudry, El-Yaniv, and Bengio, Rastegari et al.(2016)Rastegari, Ordonez, Redmon, and Farhadi, Zhou et al.(2016)Zhou, Wu, Ni, Zhou, Wen, and Zou], a clip function was employed to approximate the binarization functions. The derivate of sgn(x) is represented in Eq. 5

based on straight through estimator (STE)

Instead of Eq. 5, [Liu et al.(2018)Liu, Wu, Luo, Yang, Liu, and Cheng] utilized a piecewise polynomial function as a tighter approximation. In this paper, we further develop this higher-order estimator approach. For sgn(x) used in weight binarization, we give derivative approximation F1(x) whose active range is between [−0.5,0.5] illustrated in Figure 2(e). It is a piecewise linear function.

Based on Eq. 6 and 7, the backpropagation can be performed smoothly during binary network training. It should be noted that there certainly exist other estimators as a trade-off between tight approximation and smooth backpropagation, such as Swish-like function [Elfwing et al.(2018)Elfwing, Uchibe, and Doya]. In this section, we provide a simple yet efficient approximation and leave other options as our future work.

Since deep CNNs usually have a tremendous parameter set, a good regularization term is necessary during training process for robust generalization capability. L2

, stand for the actual binary filters for feature extraction. Thus, the

regularization term is modified to restrict the scaling factors accordingly. The total loss function is then represented as

where L(αl,γ) is the task-related loss such as cross entropy loss. αl is the weight scaling factors in which the superscript l stands for different layers. γ stands for other parameters adopted in CNN structure. The second term λ2∑||αl||22 is the new L2 regularization with weight decay parameter λ. The regularization term tends to decrease the magnitude of scaling factor αl.

In this section we show that our binary network can be easily implemented on hardware platforms via bitwise operations. To simplify the discussion, we take 3x3 convolution as an example and let the input channel to be 1. ~Wi∈R3×3 is the convolution kernel where i indicates the output channel, the input of convolution is actually the binary activation ~A of the previous layer. The 3×3 convolution operation is

where αi and β are trained scaling factors for weights and activations respectively. For the same output channel, αiβ is a constant so it can be integrated into the following batch normalization.

With popcnt operation counting number of "1" in a binary sequence, we can get the binary convolution

Figure 3 shows the hardware architecture of binary convolution based on Eq. 11. As we can see, for a 3×3 convolution with 9 multiplications and 8 additions, the binary calculation only requires 2 popcnt operations and 1 subtraction.

To further evaluate the proposed method, we show the training curves in Figure 4. First in Figure 4(a), training curves of BNN [Hubara et al.(2016)Hubara, Courbariaux, Soudry, El-Yaniv, and Bengio] and our approach are compared. Although they have similar training accuracy, our approach is faster to train and improves the accuracy a lot on validation set. Moreover, it can be observed that our validation accuracy curve is more stable than BNN due to the regularization. The effectiveness of regularization is then validated in Figure 4(b). The red curve is the result with our new L2 regularization. It has less fluctuation relatively and the regularization term does help to improve the accuracy from 92.0% to 92.3% indicating better generalization.

4.2 Evaluations and Comparisons on ImageNet

For AlexNet, our approach achieves 46.1% top-1 accuracy and 70.9% top-5 accuracy. It is the best result among five binary network solutions and surpasses other works by up to 4.9% and 5.3%, respectively. For Resnet-18, our method obtains 54.2% top-1 accuracy and 77.9% top-5 accuracy, improving the performance by up to 12.0% and 10.8% compared with other works. It is also shown that the proposed approach succeeds to reduce the accuracy gap between full-precision and binary networks to about 10%. These indicates our approach can improve the inference performance of binary convolutional neural networks effectively.

Ideally, binary neural network should achieve 32× compression ratio compared with full-precision model. But in our approach the first and the last layer are excluded from binarization operation following [Hubara et al.(2016)Hubara, Courbariaux, Soudry, El-Yaniv, and Bengio, Rastegari et al.(2016)Rastegari, Ordonez, Redmon, and Farhadi, Zhou et al.(2016)Zhou, Wu, Ni, Zhou, Wen, and Zou]. Besides, batch normalization parameters and scaling factors should be in full precision for better network representation capability. These will affect the actual network compression ratio. Table 4 shows the actual parameter size comparison of three network structures. For a typical network, binarization can reduce model size by over 10 times. Besides, it can also be observed that with a better network structure, the binary network can achieve better performance in terms of model compression ratio.

This paper proposes an approach to train binary CNNs with higher inference accuracy including three ideas. First, trainable scaling factors for both weights and activations are employed to provide different value ranges of binary number. Then, higher-order estimator and long-tailed estimator for derivative of binarization function are proposed to balance the tight approximation and efficient backpropagation. At last, the L2 regularization is performed directly on weight scaling factors for better generalization capability. The approach is effective to improve network accuracy and it is suitable for hardware implementation.